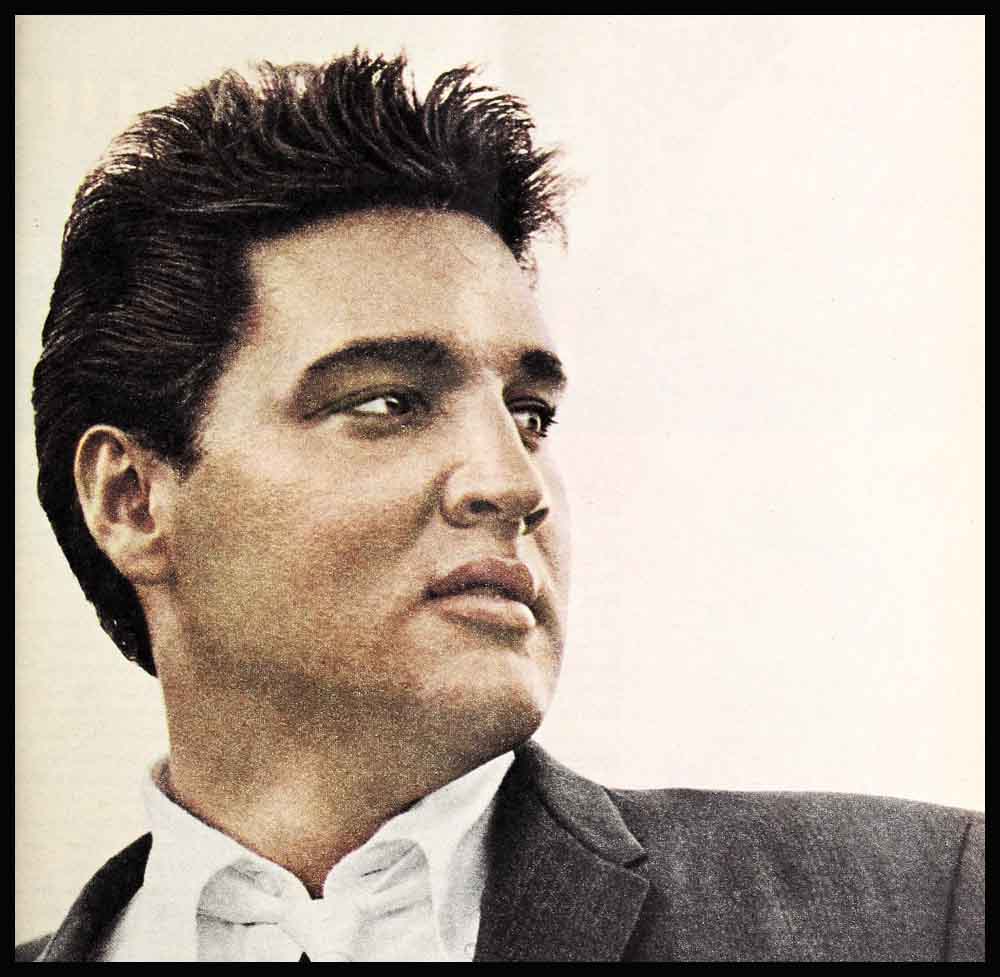 Elvis gripped the phone tightly. The voice went on: “You’re going to die. You won’t know how or when. Just keep your prayers up in front of your head. If they stop me— it won’t matter. I know three guys who’ll do it. One of us will make it. You cost us our women.” Elvis heard a quick click at the other end of the line. He put the phone down slowly. From somewhere out in the world a stranger had just tried to drive an- other nail of fear in the Presley heart. But his would-be murderer might be interested to know that he needn’t have limited himself to fifteen seconds. For Elvis doesn’t even bother to trace the calls any more. There’ve been too many of them in his seven-year-long reign as “The Greatest Entertainer in the Whole World.”

Elvis is still alive. But threats to his life go on. For this reason, a few weeks ago, the group of bodyguards assigned to him was increased from six to ten. Two of them are obvious to the public, when Elvis travels or makes personal appearances. But eight of them are “shadows”—inconspicuous, as nearly “invisible” as it is possible for a human to be. One or more of these “shadows” may be standing next to you in the crowd. Or sitting right next to you in an audience. They are never seen talking to Elvis, they never even stand near him. This is to keep them from being spotted by conspirators who are masters of timetable planning. But the “shadows” are expertly trained in judo and in maneuvering swiftly through crowds.

Two of the “shadows,” Photoplay has been informed, are girls—one eighteen, the other twenty-two—who to all appearances are avid, worshipping Presley devotees. Their closeness to their adored one in public is accepted as “natural.” But their real purpose is to protect Elvis. And two of the male bodyguards maintain vigils even when Elvis is “alone” with a girl! (The techniques of surveillance when Presley is “alone” are secret. And very mysterious.)

Three of the new guards are unknown even to Elvis himself, because otherwise he might unwittingly identify them by a nod of recognition or even the flicker of an eyelid.

A cousin of Elvis, who knows him i intimately, told us, “No matter what people say about him, there’s one thing for which I’ll always admire him. Elvis is never afraid, inside or out. There are more men who want to do harm to El than any other entertainer, and, simply, he knows it.”

Is Elvis really that fearless? “Not exacly,” Elvis admits. “Wouldn’t be human if I didn’t scare a little once in a while. Yes, I get skitterish about some of the threats, but what can I do? Hide? Eve been learning a lot about life from show business and from people who, for some reason, think they want to do me harm. You can’t go running scared from what’s going on around you. You just have to stand and face it and hope to heaven you can handle the situation.

Sorry for a killer!

“More times than not you come out doing a lot better than you thought you’d do. Sometimes you find out that what’s been worrying you the most wasn’t really there at all. You just thought it was. And about those people who call or write those things about beating up on me—you know, I don’t think they really mean a word. They might, a little before they say it. But as soon as the words are out, I have a feeling they realize how crazy it is to blame me for something I don’t even know anything about.

“No, I don’t hate the threateners. I guess in a way I feel a little sad for them. Can you imagine being so unhappy you think you want to kill a fellow? I’d say that’s the worst kind of torture a man can suffer. Once you got that going inside you, you’re in trouble. You can’t dodge it. It goes to bed with you. Sure wouldn’t want it to happen to me.”

But despite Elvis’ casual and somewhat philosophical viewpoint toward those who have, however anonymously, threatened his murder, those close to him must take the letters and the calls seriously. Presley’s manager and friend, Col. Tom Parker, put it bluntly, “I agree with Elvis. Nine hundred and ninety-nine out of one thousand could be harmless. I have to worry about the one guy in that thousand who might mean it.”

It isn’t all that Parker and Presley have to worry about. Besides the out-and-out threats to Presley’s life, there are a hundred other small dangers that could be fatal to him even though no harm is intended.

“Crowds can love you and kill you,” Elvis once remarked. That statement seems innocent enough, but is loaded with a terrible truth. Presley meant more by it than most people realized. An excited mob can knock you down a flight of stairs; break a window and cut your face to ribbons; crush you to death.

Not long ago Elvis came down from a stage in a big mid-western auditorium. Thousands of admirers swarmed about him, begging to touch him, pleading for autographs. screaming for kisses. A scrawny, youth in the back of the hail, seething with jealousy, yelled “Fire!”

Two security guards grabbed the boy. They clapped a hand over his mouth, and hustled him to a “jail room” on the site.

Providence alone knows what a terrible catastrophe might have taken place had that youth yelled “Fire” loudly enough. Fortunately, the hysterical teenagers were making so much noise over Elvis that the cry was only heard by some few adults and the guards.

If panic had seized the thousands at that moment. Presley—and who knows how many of his fans?—might have been trampled to death.

Travel is another hazard. Recently a succession of plane crashes involving top entertainment personalities finally put an end to Presley’s travel by air. Autos are almost as dangerous, especially in crowds. Elvis is still haunted by his friend Fabian’s close call when screaming fans pushed their way through a police cordon and smashed Fabian’s car window so hard that splinters of glass had to be removed from the Fabe’s eye. A fraction of an inch one way, and Fabian would have lost his sight in that eye. A longer sliver of glass—and Fabian could have lost his life!

After all that, Elvis now moves about by train. Well guarded. of course.

“Only” a crazy person

Then there’s food. Presley, who loves food, can only let his mouth water at the goodies sent to him in the mail. Who’d want to poison Elvis? No one, of course, except maybe . . . ? You don’t take the chance when one bite might mean your death.

One unthinking friend of Presley’s ad- vised Elvis: “Why worry about it, El? Only a crazy man or woman would try to shoot you—or anything like that.’’ What the friend overlooked so stupidly is that a crazy man’s (or woman’s) bullet is the only kind Elvis must worry about. Sane people don’t kill.

But as we said, it’s nearly incredible how calmly Elvis can take this closeness to sudden death, instant mayhem and assault without warning.

“I guess,” he says, “that when I got the first death threat a few years ago I was scared. For a while I thought: If people knew I was scared they’d call me chicken. But now I know there’s a big difference between being afraid and being a coward.

“Anyhow, I got to live with this bit. Maybe it’s what I got to pay for all the breaks I’ve had in my life. You don’t get anything for nothing. Other people have other things to worry about. Every one of us has some kind of problems. It’s part of being alive.

“But enjoying life, having friends, having fun, learning about people, doing your job and trying to do it better than anyone—that’s the side of living that makes it all worth while.

“If there are people around who don’t like me. I can’t help that. All I can say is that hate is a big waste of time, because there is so much in life to like and love. Heck. when you stop to think of it, there is so much it takes more than a lifetime to love everything you want to.”

Elvis’ pelvising doesn’t make the headlines any more with hysterical cries of “Immoral, obscene and indecent.”

“Not since the twist came in,” observes Elvis with a big smile. “I guess I wasn’t so awful after all. I may have been twisting a little ahead of the time, that’s all. And that’s good.”

Considering all, Presley has been a complete disappointment to his detractors on many counts. “He just can’t last,” said Jackie Gleason in 1956.

In 1958. a judge stated from the bench that he “wishes Elvis Presley had never been born.”

The hysterical screamers of righteousness predicted all kinds of special hells for Elvis—and soon.

But Elvis is still moving and moving well. He’s older and smarter and more skillful. He’s not at all afraid any more. The most recent threat to his life wasn’t the first nor, in all probability, will it be the last.

“I suppose,” he says, “if they weren’t threatening me they’d be threatening someone else.”

Presley may have steady nerves over these promises to kill him, but some of his friends are apprehensive.

“First of all,” says a Presley buddy. “you got to consider the pressure that lays on Elvis like a big rock. Just think about it! Suppose every time you opened a letter, every time you picked up a phone, somebody might be telling you they’re going to kill you. How long can you stand something like that without coming unglued? When’s it going to stop? Man. you live like that long enough and if you don’t end up in a suede strait-jacket you got strength. and I mean strength. of character. I think Elvis has got that, but none of us is ever going to know for sure till it’s all over.

“And with as many people out to get Elvis as they say there are—well, it only takes one. and it’s the big blackout. Don’t knock Elvis. He hasn’t had it, he’s having it and it won’t quit!”

We discussed this friend’s apprehension with Elvis. He thought about things for a moment and then said, “Well, there are some people who say they want to kill me. So it’s nice to know that there are other people who like me enough to worry about me. Maybe it’s that kind of worrying that takes care of me—that and having God look down and keep things safe.”

We sought the answer to one last question from Elvis: Since threats of death are rarely faced by the average man, perhaps they resulted in a kind of thinking from Elvis that was also rare.

A special kind of philosophy.

He shook his head.

“Nope,” he said. “Of course, I hope no one of those people ever succeeds because I want to live. And I think I got a good reason.

See Elvis Presley in “Girls, Girls, Girls.” Paramount. His next picture will be “It Happened at the World’s Fair,” M-G-M.