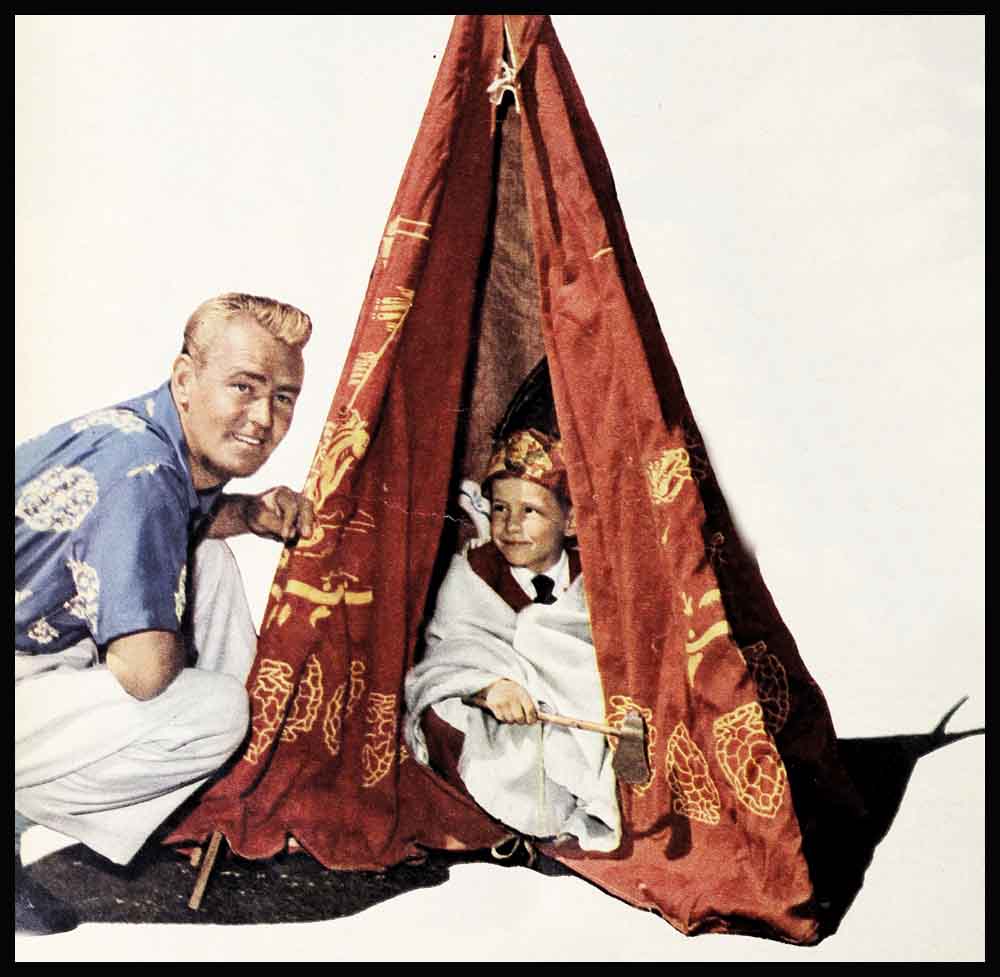 Santa Claus rules at Christmas, but on June twenty-first pop has his inning! And if you think that’s not important in Hollywood you don’t know your leading men. Tough guys rush home from screen villainy to dandle babies on their knees. Dashing cavaliers are tamed by baby talk. Suave sophisticates mix formulas and get up docilely for the 2:00 a.m. Feeding.

This year Alan Ladd and his brood will celebrate Alan’s day in Europe. Father’s Day has a special poignancy to John Derek. For a long time, he and Patti wondered if they’d be able to keep their son Russell— he was so ill for so long. But now he’s happy and healthy and every day is Father’s Day for Daddy. At the Mitchums’, daughter Petrine and her two big brothers make the day special to Bob. And for first-time fathers Dale Robertson and Jeff Hunter the day is something entirely new.

There are Hollywood fathers who are bemused by the birth of their first child. Jeffrey Hunter was only five days away from sailing for Europe to do “Sailor of the King” when young Christopher Merrill was born. Jeff had been rushing, packing, worrying that the baby wouldn’t be born before he left. Then when it happened he went into a quiet state of shock. Barbara’s mother had her first look at her grandson and floated out on an ecstatic cloud to tell Jeff. “Such a beautiful baby!” she exclaimed to Christopher’s father. “So perfect, so healthy. A beautiful baby!”

“That so?” asked the glassy-eyed father politely.

And then there was Ricardo Montalban, who—despite the fact that he had been a new father three times before—found life a great fluster when Victor, the fourth baby was en route in April, 1952. The picture Ricardo was working on at the time was behind schedule, and that meant production had to be stepped up—no matter what. Ricardo, however, was determined to break away in order to get his wife to the hospital on time. The cameras cranking on him that day did not record his jitters, but people in the cast reported afterwards that they were sure the loud thumping of his heart could be picked up on the sound track.

His careful plans went sour, though, and Georgiana was rushed to the hospital while he was still on the set. When word reached him, Ricardo tore off like a jet plane. By the time he arrived at her side, Victor was already waiting for him. And both mother and baby were doing just fine.

But the father? He fainted dead away!

Alan Ladd’s another old hand at the father routine—and he seems to take it all in easy stride. Fathers’ Day, as far as he’s concerned comes 365 days a year, and all plans he makes to do anything or go anywhere always include his youngsters. Before he and the family left for England early this year, where Alan made “The Big Jump,” he had a million and one things to do—naturally. But he stopped them all dead because young David wanted to spend just one day, “Just one, Dad, please . . .” on the family ranch before they took off. It’s a long, long drive and it took a lot of time out of a schedule that was already much too crowded. “But how,” Alan wanted to know, “could I possibly have said no?”

Some of the stories of Hollywood fathers and their relationship to their kids are chockful of fun; some are crammed with happy nonsense. And far more often than you’d think, the stories are filled with qualities that can be described only by such words as tender and courageous.

One of the tenderest of them all is the tale of Burt Lancaster and his son Billy. When Billy was stricken with polio, the doctor advised—along with massage, hydrotherapy and a wide variety of exercises—that the boy do some dancing to strengthen his muscles. Little Billy was horrified! He was a he-man, just like his pop, and he wasn’t going to have anything to do with that sissy stuff!

So Burt went off quietly on his own and did a little extra-curricular work. Dancing then, was as out of character for him as Billy thought it was—but not, Burt was determined, if it would help out in the difficult father role he was playing. One day, he came whirling and tripping into Billy’s room. And it worked. If dancing wasn’t too girly-girly for Pop, then Billy couldn’t see anything wrong with twirling about himself.

The process was slow and painful. But the first real steps that Billy took were dancing with his father. And today, he shows no trace at all of the crippling polio.

Gene Nelson’s son, Chris, wants to be all he-man too. But it was tough going for him for a while, because he’s the youngest and the littlest kid in his neighborhood. So it was only natural—children being what they are—that Chris got picked on, and even roughed up once in a while. He hated it, but he was so much littler than the others that he didn’t know what to do about it—and every once in a while he’d come home and weep and mope.

Finally, Gene had one of those man-to-man talks with the boy. He explained to him that crying wasn’t going to do him a bit of good, and that the other fellows would think he was a sissy and would keep right on picking on him—as long as he came running to his parents in tears.

“Yah, Pop, I know,” Chris mumbled out of a tear-stained face. “But they’re all bigger than I am.”

He didn’t have long to wait. Chris walked right out of the house, picked up a stick, and clouted the biggest, bulliest boy of them all over the head with it. And life has been peaceful ever since.

“It wasn’t exactly what I had in mind,” says Gene a little sheepishly. “I don’t want Chris to be that kind of a tough guy. And I know how far from tough he really felt as he was using that stick. He was so scared you could see his little shorts shaking. But it was his own system. And it worked. And that’s good enough for me. And for Chris!”

In the Roy Rogers household, there’s always some amusing or exciting kid stuff going on. Right now, Roy is keeping busy getting acquainted with the two youngters he and Dale adopted last year, shortly after their little daughter Robin died. Young Sandy still hasn’t quite gotten over his original shyness with his new family, and, as a result, he speaks very little and usually very timidly when he speaks at all.

So Roy was delighted when, not long ago, Sandy got impatient with Little Doe, who was teething, and was as far from good-natured as teething babies usually are. She cried and cried and cried, and after watching Dale’s fifth unsuccessful attempt to put her to bed one night, Sandy spoke up, “Dad, do you think we ought to give her back to those Indians?”

“With that kind of comment,” says his proud pop, “you’d think he was being raised by Will, not Roy Rogers!”

Keepin’ up with his young ’un keeps George Murphy a lot younger than he really feels he has to be. Dennis Michael is all boy—and all busy boy, at that! For the moment, he has hired himself out as a hand on Dick Powell’s ranch, That, says George, may keep him fully occupied for a while—but he’s not counting on any long-range respite. Dennis is always up to something says George with a tone that’s far more proud than irritated. “You never know what to expect next.” Like the time, for instance, when George settled down quietly for an afternoon in front of the TV set when who should grin out at him from the screen but his own small fry; Dennis had heard about a pet contest, gone off and entered his cat, and the next thing George knew, there they were—the whole cat and caboodle—calmly being televised.

That cat, incidentally, has as much to do with keeping George Murphy spry as Dennis does himself. It loves to climb trees—up trees, that is. But getting down out of them is something else again. And by now, the Murphy neighbors are used to the sight of papa George, shinnying up a tree to rescue Tabby.

Of all Hollywood’s fathers, the most out and out lady’s man is probably Robert Mitchum. He’s always treated his two sons, Chris and Jim, as a couple of regular guys—which they are. But baby Petrine, just a little over a year old, has brought out the cavalier in him. He can’t get over the wonder of having fathered something so delicate and feminine. And he can’t stay away from her.

When he was on a personal appearance tour not long after she was born, he found an old-fashioned baby carriage in Denver, Colorado—a perambulating surrey with a fringe on top. The carriage was banged up and battered, but Bob could see it as the ideal coach for his baby princess. So he lugged it home, repaired and repainted it. And that’s where Petrine rides whenever Pop’s around. He wheels her from the kitchen to the study, from the study to the garden—wherever he stops to roost for a moment. And there’s conversation every minute of the time, with Bob confiding gravely to Petrine any matter that happens to be on his mind. And Petrine, gurgling happily back at him in that mysterious baby language which nobody else can understand, but which Bob insists means, “Gee, my pop’s a great guy!”

They take to their duties and responsibilities in a million different ways, do these Hollywood glamour boys! But there’s one thing they’re all unanimous on: that nothing that’s ever happened to any of them in their exciting, romantic and action-packed careers can possibly compare with the downright fun and the full-fledged pride they get out of having somebody call them Pop!