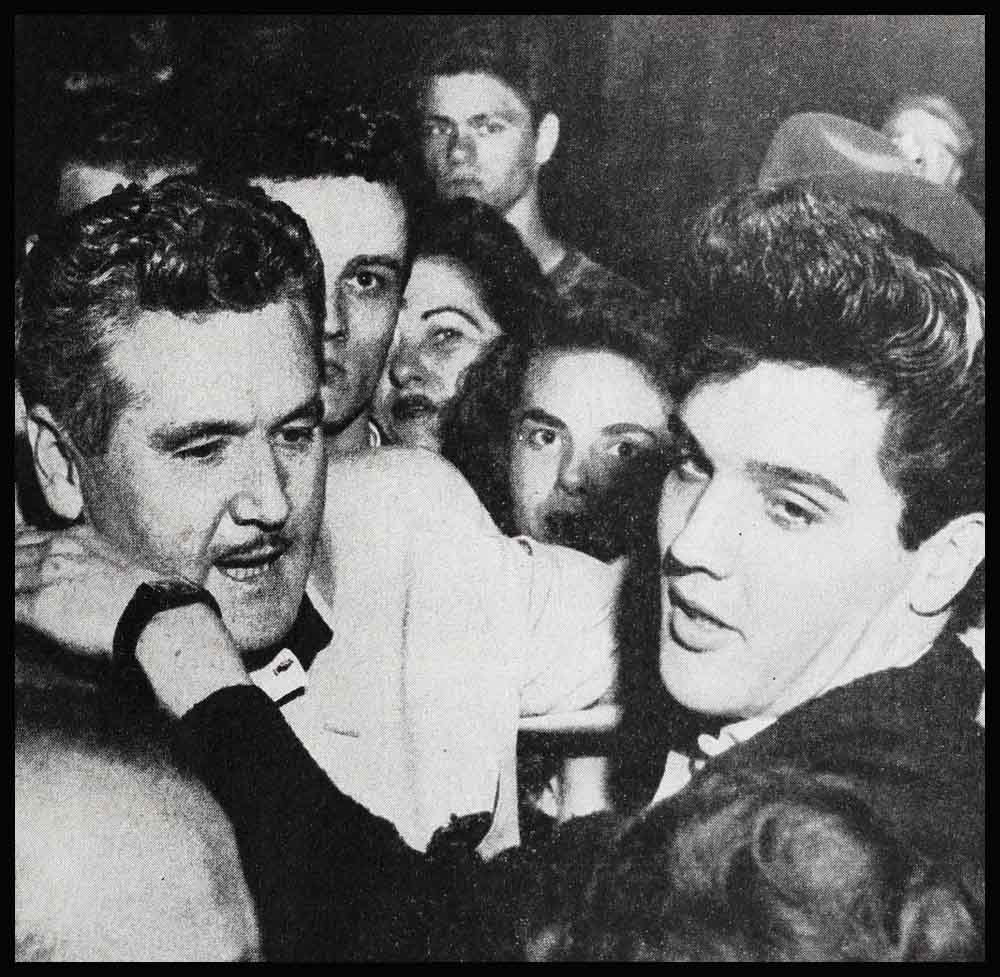 Elvis’s father, Vernon Presley, looked happier than I’d seen him look in a long while that day we met for a chat in a restaurant in Memphis, Tennessee. Casually dressed in a gray plaid suit, black shirt and a light yellow tie, he greeted me with a warm Southern smile, immediately ushering me over to a table in a darkened corner, remarking, “You can’t imagine how pleased I am that the secret’s out. About my marriage, I mean. To tell you the truth, I’m more than glad to be able to talk to you about it. It’s the first time I’ve said anything—outside of the family.

“You see, Dee’s such a wonderful girl and we’ve both hated living behind all those rumors and gossip in the newspapers which speculated about who she might be. Almost every day there’ve been items calling her my ‘mystery blonde’ or suggesting that she’s still legally married. She’s divorced, you know. I felt I shouldn’t say anything until everything was arranged, but that seems to have only added to the confusion and mystery.”

“Of course,” he said slowly, “there will never he anybody to really take the place of my (late) wife—I know that and Dee does too—but she comes as close as anyone could.

“Everyone likes Dee,” he remarked. “They tell me they find her very sweet but a little shy. Her brother says she was always very sensitive and understanding as a child.

“Dee has three children of her own, you know, by her first marriage. (She was the wife of Bill Stanley, a master sergeant in the Army. They broke up ten months ago.) There’s Billy, who’s seven, Ricky, six, and David, the youngest; he’s four. I love them already. I believe if you love a woman you will naturally love her children. Of course, it’s never quite like your own children, but I will always try to do right by them. They won’t have to call me daddy. I’ll teach them to love their real daddy. As far as they are concerned, he’s a great man. That’s what I would expect if the shoe were on the other foot.

“Are we going to have children of our own? Well,” he laughed, “that’s getting a little too far ahead—I don’t know yet. I’m not a spring chicken anymore.

“What does Elvis think of his future step-brothers? Oh— he gets a bang out of them, but sometimes I think they worry him too much. They really love him so.

“What is Dee like? She has the most wonderful deep blue eyes,” he said proudly. “She’s slim and she has silvery-blond hair. She’s thirty-one—that’s quite a lot younger than me, I know—and she’s from the South, like us. Born in Nashville, Tennessee. But I met her in Germany, when she visited my mother with another woman.

“She’s kind of a quiet person, not too much for going out. Occasionally we will drive to the movies or go to some nice place to eat, but we usually stay at home and watch television together. She came to stay with us at our home when Elvis was discharged. And in case anyone wonders, we were well chaperoned! My mother lives with us and Elvis always has a gang of his friends around.

“She likes Elvis’s music,” he continued. “She likes rock ’n’ roll. But she likes other kinds of music too. Church songs for instance. And she’s a terrific cook—can cook anything. She’s already been doing some cooking for us.”

Then he said slowly, “I feel very good about this marriage. We plan to settle down and make our home right here at Graceland. I’ll take care of the place while Elvis is off on trips or making movies like ‘G.I. Blues’ for Paramount.

“Oh—I am happy,” he added, as if to say all the months of loneliness were gone. “But it makes me happiest of all to know that Elvis is with me on this. It wouldn’t have been the same otherwise,” he added thoughtfully.