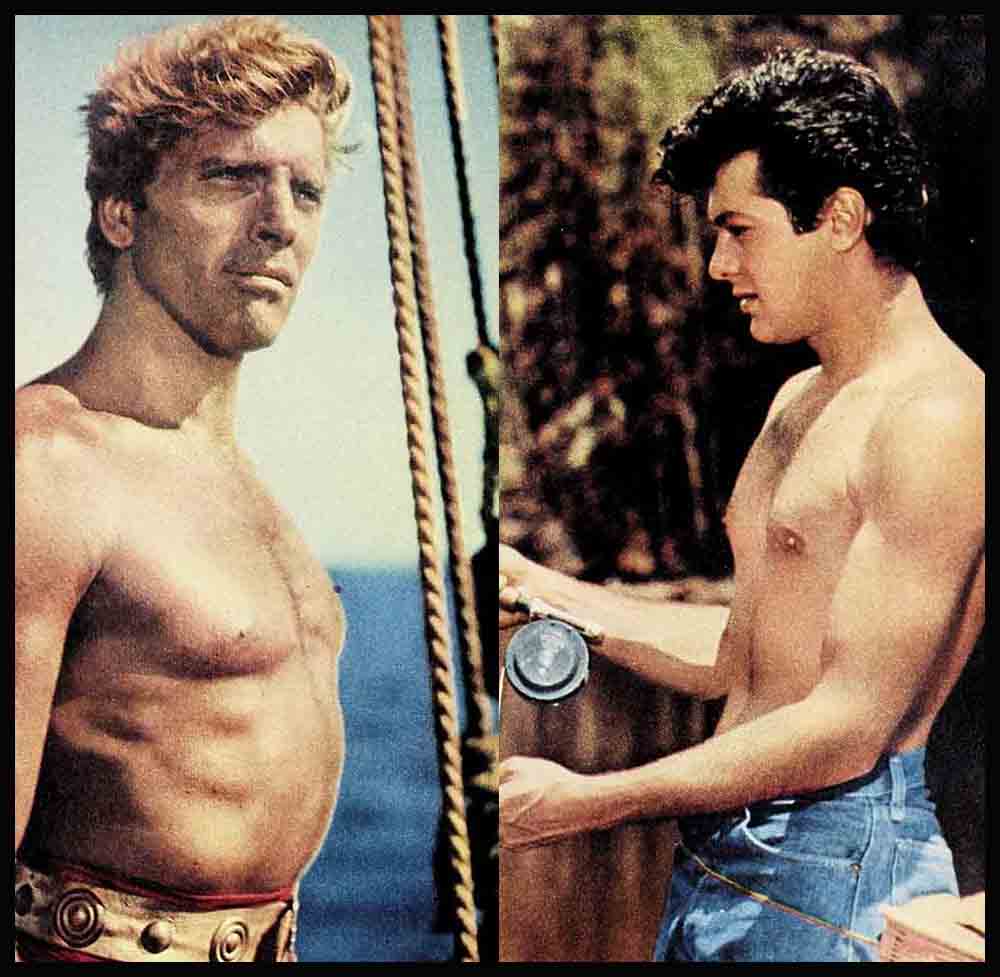 JOHN WAYNE held a powder puff in one hand, a mirror in the other, and painstakingly dusted his nose. He grinned self-consciously when he caught someone watching. “Have to take the shine off,” he explained. Then he added, “If I could make as much money as a prop man as I do being a movie actor, I’d still be propping for John Ford.”

Even those who have been around actors for a long time are often startled when they see big handsome he-men of the wide open spaces primping and prancing in make-up before they go into a scene. It’s all part of the job, of course, but it brings to mind some memorable words of the late John Barrymore. “It’s okay for a woman to sit in front of a mirror and powder her face and curl her hair—you expect that,” said Barrymore. “But for a man, it’s unnatural. It’s just plain sissy stuff.”

Is it? The men in this country seem to think so. Joan Fontaine, discussing the shortage of actors in Hollywood, provides a theory. “It’s because American men are not proud to be actors,” she maintains.

Well, you wouldn’t say that Burt Lancaster, for instance, is ashamed of his trade, although sometimes he is embarrassed by it.

And no one has heard Robert Taylor and Dan Dailey complain about their calling. Humphrey Bogart and Errol Flynn like being actors. And Gregory Peck would never be happy if he had to do anything else. However, they all try to compensate for the frills and furbelows of their film careers by leaning over backwards in private life to be very, very masculine.

To go back to Mr. Wayne, John is luckier than most actors in that he doesn’t have to use much make-up—except for Technicolor film. For his movies are rough and rugged. But between pictures, John goes far away from the soft life of the sound stages—mostly duck and deer hunting.

Clark Gable used to know a duck hunter when he saw one. But he ran into a blonde blind with the fair Sylvia. It was different with Carole Lombard. When the “King” couldn’t sleep, he’d kick the covers off, roll over and say, “Let’s go hunting.” And before he could reach for a gun, Carole was dressed and ready to down a duck—sometimes as early as 5:00 a.m.

Burt Lancaster risked his beautiful neck not so long ago, proving his masculinity. A girl photographer was taking pictures for a magazine. “Could you do one of your tricks, Mr. Lancaster?” she cooed. Burt’s an obliging fellow, so he jumped on to a twelve-inch balustrade outside Hal Wallis’ office, and posed upside down on one hand. Passersby three stories below almost passed out!

A rugged guy like Broderick Crawford has to find an outlet for the restrictions and physical frustrations of his trade. His pal, Lon Chaney, is the same. Most evenings after working in a picture, both guys, who are the same weight and age, go to a gym and beat each other up! Or try to.

It may very well be to explode bottled up virility that Robert Mitchum and Humphrey Bogart get involved in barroom brawls. At one time, Howard Hughes hired a guard for Robert to prevent fights—until Bob wanted to fight the guard! Bogey has barred the Stork Club and El Morocco from his list of New York fight rings. He’s had a battle in each.

Tyrone Power gets his relief in flying. When Ty was tops at Twentieth, boss Darryl Zanuck bought an expensive Beech-craft plane for him to fly about in. But after a flight from South America to Africa, the plane was eliminated. Ty and his pals were bucking a bad storm when the gas i tank started to leak, and everyone had to take off his shoes and drop ’em overboard to prevent a nail in a shoe striking a spark. Nowadays, Ty keeps a one-engine plane in England. And he rents planes here.

A great big guy like Victor Mature has to stay put during working hours. But comes the six o’clock whistle, and Vic is on the town with his men friends. Another manifestation of Vic’s need to prove his masculinity is his fantastic carelessness about his clothes. He wears socks that don’t match, ditto for coats and pants.

During his childhood, Tony Curtis’ playground was a crowded city Street and he came home with many a black eye. The background gave him a good right hook and he keeps in practice in the Universal-International gym.

How does Audie Murphy, the most decorated G.I. in the war, feel about the non-combative profession of acting? The answer is in his den—stacked with every type of gun and rifle. Audie has the biggest gat collection in Hollywood and he has to promise before starting a movie that he will leave the guns alone until the film is finished.

“He’s skiing at Big Bear,” replied R. J., and added hastily, “Don’t print that. Dan’s in the middle of a picture, you know, and he’s not supposed to ski.”

Dan, who’s a man if there ever was one, always looks like a little boy caught stealing the jam when he’s caught emoting in a scene. When he’s dancing, it’s different. That’s work, but saying, “I love you” to Betty Grable for public approval brings a sheepish grin to Dan’s blond features.

Tab Hunter is new to movies. His first part in “Island of Desire” was a rugged one. Off-screen, Tab is as rugged as the fellow he portrayed. And he’s still another star whose studio fears for his neck when he’s galloping around on his horse, Out On Bail.

Lex Barker uses Max Factor body makeup for his Tarzan role. But don’t get the idea that he’s a sissy. To keep his torso in gleaming condition, Lex not only exercises in the morning, but in between scenes on the set you’ll find him twisting and gyrating and chinning. It was fat around the middle that eliminated Johnny Weissmuller from the Tarzan series. Lex isn’t taking any chances.

Gregory Peck is not strong. He injured his back rowing for the University of California at Berkeley. And, more recently, he passed out cold on the set while working. But don’t undersell him on the masculine front. Would a sissy ride the rapids down the Rogue River for eight days in a small boat? Would a tenderfoot teach himself to ride from scratch, as Greg did for that wild, uproarious Western, “Duel in the Sun”? He went all the way, even to riding a horse up some steps and into a hotel.

Errol Flynn has brittle bones. He has already broken his foot three times, and dislocated his back more than once. still he has a compulsion to keep on and on proving that he’s a Man. This is the reason for his yacht, the why of all the fights he gets into, legally and fistically. The only person he ever was afraid of was his first wife, Lili Damita. And he’s over that now, demanding a reduction of the huge tax-free alimony he pays her.

Ricardo Montalban goes in for weight lifting, and chinning, as an antidote from swooning for cinematic sweethearts . . . Keenan Wynn has his motor bike. So does Gable. Rock Hudson likes to swim, ride horseback, play tennis and golf. He hates the term “pretty boy” and makes no bones about it. Cornel Wilde compensates for the lipstick he must use in his films by lunging at fencing instructor Fred Cavens—every day between films.

Jimmy Stewart talks like a boy scout in his pictures, and on his own time—I mean he’s kind and courteous. And brave. At the beginning of the last war, Jimmy joined up as a private, rose on his own merits to a colonelcy. He was decorated for bravery for ever-so-many flying missions. He still flies, but like Gable, he’s had it in the air, although that old feeling did come back when he was making “Bend of the River.” They caught him climbing into an open plane for a sightseeing trip over the Columbia Gorge.

In the old silent days it was easy for a sissy to masquerade as an actor. But the talkies killed off all the severe cases. A high girlish voice emerging from a deep hairy chest sounded the death knell. Just the same, the boys, embarrassed by the powder puff routine, spend a lot of time off stage proving they’re as rugged as the parts they play. And that’s very rugged indeed.