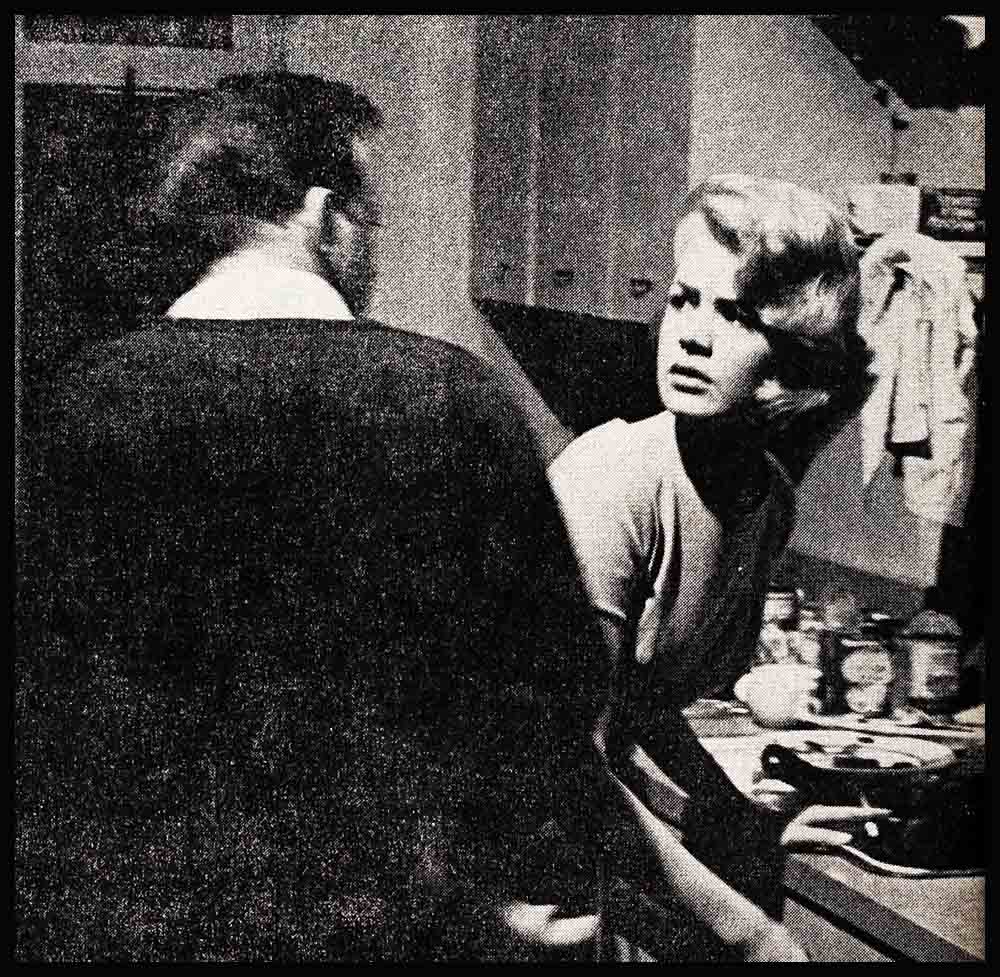 It was another forever and ever marriage that soon came to an end. After a little more than two years, the marriage of Sandra Dee and Bobby Darin is over. Over the day Sandy took the baby and walked out.

When Sandy married Bobby in December, 1960, there was not the slightest doubt in her mind that Bobby was her entire glorious world and would be forever and ever. And Bobby was on “cloud seven.” Only their love for each other counted. Nothing else. Not even Sandy’s mother, Mary Douvan, could convince the two that perhaps such a hasty trip to the altar would be premature. If they would only wait a few months longer to make doubly sure, Mary pleaded.

Sandy was only eighteen then. Sandy and Bobby met just that past fail, while making “Come September” in Italy. Under the romantic Roman stars they fell in love faster than you can say “Romeo and Juliet.”

But Bobby had his mind made up. The rest of the world and its advice didn’t matter, not even the feelings of Mary Douvan mattered. He knew what he wanted, and Sandy did, too. I recall her saying at the time: “A lot of people think Bobby and I are making a terrible mistake by marrying so quickly. But even if it’s a gamble, it’ll work out, I’m certain. Some people are engaged for two or three years, marry and then find out they don’t like, much less love, each other.”

The world did seem to be Darin’s oyster. However, Bobby made his first and biggest mistake by thinking that he could build a shell around their marriage. Even an oyster eventually has to come out of its shell. Sandy’s reaction to Bobby’s tactics at first was no reaction.

After all, Bobby was head of the household and she enjoyed this protection. Studio executives, especially Producer Ross Hunter who discovered the actress, were unhappy. Darin issued orders that he and Sandy would refuse to pose for photographs together. He even went to great lengths to carry out this edict.

Once to avoid cameramen at Bobby’s opening at the Flamingo Hotel in Las Vegas, Sandy had to remain in her room. Hunter became especially upset when Darin began to hint that Sandy’s career wasn’t being handled properly. This was like saying you hate your father because, under Hunter’s tutelage, Sandy skyrocketed from a New York model to a top box-office star. Then there was a report that Bobby felt Sandy should make pictures with only the big, big male stars. Anyone less than a Rock Hudson wouldn’t be acceptable.

Certainly Bobby received the lion’s share of criticism those first few months of marriage. Yet he deserves credit, too. Until her marriage, Sandy was treated as a young and delicate teenager. Even though she was eighteen when she met Bobby, without makeup and wearing those princess-style dresses she could pass for a child of twelve. And her mother was always by her side. They were inseparable. Some feel that one reason Sandy was so determined to marry was to finally be on her own.

When she became Mrs. Bobby Darin, Sandy no longer was the shy little girl. Overnight she blossomed into a full-grown woman.

But in some ways—Sandy appeared awestruck at many of Darin’s mannerisms. And some of his fast-lingo was soon mimicked by her. She began to smoke cigarettes, and occasionally would join him in a cocktail. Her mother wisely bowed out of Sandy’s life, hoping and praying for the best.

Surprisingly, Darin’s formula 3r a happy marriage apparently was working. The union was additionally fortified at 2:19 A.M. in the wintry wee hours of Dec. 16, 1961—when the first cries of Dodd Mitchell Darin were heard at Cedars of Lebanon hospital. Both Bobby and Sandy were ecstatic over becoming parents. Soon afterwards, however, reports began leaking out of dissension. Some said this stemmed over Bobby reportedly wanting Sandy to give up her career and devoting full time to being a mother. Others claimed their love had withered, the honeymoon was over now and forever.

Since the first of the year the tension obviously was mounting. Sandy appeared overwrought and tired. Bobby flung himself into a multitude of business ventures, working at his office on the Universal Studios lot from early in the morning until late at night, and then working in night clubs. When he was appearing on stage, Sandra played the role of the appreciative wife sitting ringside and forcing smiles. The smiles became more forced and insiders say Bobby insisted on having his Sandy at all of his openings. This was often hard on Sandy since most of his nitery dates are out of town. Bobby, they say, also insisted that the baby travel with them. Caring for a small child in a hotel room can be like Alcatraz for a mother. Ironically in the past months, he seemed much friendlier to the press. Bobby reworked his night club act, eliminating all of the brash and cockiness that once was his trademark. while filming “If A Man Answers,” he even allowed cameramen to take photographs of Sandy with him.

If Bobby had made any amends, it was too late in Sandra Dee’s eyes.

What triggered the big blow-up could have been as minor as Bobby telling Sandy he didn’t like the gown she purchased for his Coconut Grove opening. However, both are close-mouthed about it, and at any rate no matter what set it off the dynamite had been accumulating over many months. Finally, the night Bobby was scheduled to act as one of the masters of ceremonies at the Foreign Press Awards he didn’t show.

Bobby’s press agent said he was ill. Well, that wasn’t so very far from the truth as it happened.

An insider (a friend who asked that his name not be published) reported exclusively to Photoplay:

“Sandy and Bobby battled like wildcats all that day. And Sandy was in tears most of the time. Bobby was shaking with anger. Then silence. Silence between them for several days. They didn’t speak. They have quarreled before, but this time, from the way they were treating each other, I knew it was the end.

“There was no apologizing by either of them. They didn’t kiss and makeup like they used to.”

Finally, Sandy could stand it no longer. But who could she turn to? Her mother was the logical choice. weeping on a mother’s shoulder has relieved many a hurt feeling. Sandy, however, didn’t turn to her mother for advice. Perhaps, she felt embarrassed, remembering all that she said before the marriage. Maybe if Sandy followed her mother’s advice then she wouldn’t be suffering the miseries and heartaches of a marriage breakup now.

So the call for help went to Betty Mitchell. Betty is a publicity woman at Universal-lnternational and ever since Sandy stepped on the lot years ago they have been close friends.

“I have to get away,” Sandy reportedly said. “I must get away. To have time to think.”

So that same day, a pale and haggard looking Sandra Dee boarded a United Airlines’ jet plane for Hawaii. She was leaving Bobby Darin. The baby, now fifteen months old, was in her arms, and Betty Mitchell and a nurse were at her side. She had gotten away.

There must have been a large lump in Sandy’s throat when she and her little group checked into the Royal Hawaiian Hotel in Honolulu. The plush hostelry on Waikiki beach is a favorite spot tor honeymooners. But tor Sandy the only love in her heart was the love tor a small boy with gobs of black hair.

Miss Mitchell swears that Sandy neither discussed nor mentioned Bobby the entire week she was in Hawaii. She immediately cut herself off from the outside world, and she didn’t even accept any calls.

At the same time, Bobby was playing at Harrah’s Club in Lake Tahoe. And when Sandy failed to take her regular ringside vantage seat at the opening, the rumors came out into the open. Although her close pals confided that she dreaded making such appearances in the past, she rarely had missed an opening.

When a newspaperman queried Sandy about the rumors, it was obvious the end was near. Miss Mitchell replied for her by wire:

“Sandra having wonderful vacation. No statement on the other questions.”

Was Sandy having a wonderful time? Most of the days Sandy and her son would spend on the hotel’s private beach, and she stayed in her room at night. She always seemed to be in a pensive mood. It was as if her thoughts were thousands of miles away—and they probably were. Maybe she expected Bobby to cancel his engagement at Lake Tahoe and fly to her side in contriteness. Maybe she thought the whole thing was a bad dream and she was only waiting to wake up and have it end.

Even in Hawaii they gossip, and the first day Sandy came on the beach to sun herself the tongues really wagged. The scanty bathing suit she was wearing failed to cover a black and blue mark that was as big as a dinner plate on her thigh.

“It looks as if someone has tossed her around like an old tennis ball.”

However, Sandy says no one has ever laid a finger on her in anger and certainly not her husband. The bruise was the result of an accident. When getting up from a restaurant table she bumped her leg.

Almost as suddenly as she decided to run away to Hawaii with the baby, Sandy announced she was ready to come home. Bobby was still appearing at the Nevada resort when she arrived in secret back in Hollywood.

Three days later, on March 26th, she was due to report to Twentieth Century-Fox for wardrobe fittings. U-l had loaned her out to film “Take Her, She’s Mine.” Sandy never made it to the studio that day.

“Please call 20th,” she informed a U-l studio publicity man, “and tell them that I won’t be in today. My husband and I have separated.”

Whether she and Bobby had a long telephone conversation prior to the announcement, only the two know.

Bobby did appear surprised and shaken when word reached him that it was in the newspapers. He refused to even discuss it with his press agent. Likewise, Sandy went into seclusion and her mother mysteriously disappeared, too. Actually, it was later revealed that they were together, closer than ever, in Palm Springs.

On Sandy’s side of the dispute, one of her friends says this:

“Bobby Darin is impossible. He thought he was helping Sandy’s career, but he was ruining it.”

And on his side: One of his buddies swears that Bobby had to make too many concessions.

“Sandy didn’t like his friends. She wanted to run the entire show.”

Whether the two can resolve their problems and get back together only they know. Perhaps, by the time you read this all will be well again.

If either of them knows the power of the words, “I’m sorry,” perhaps, even at this stage, that’s all it will take. But will they say them? I don’t think so.