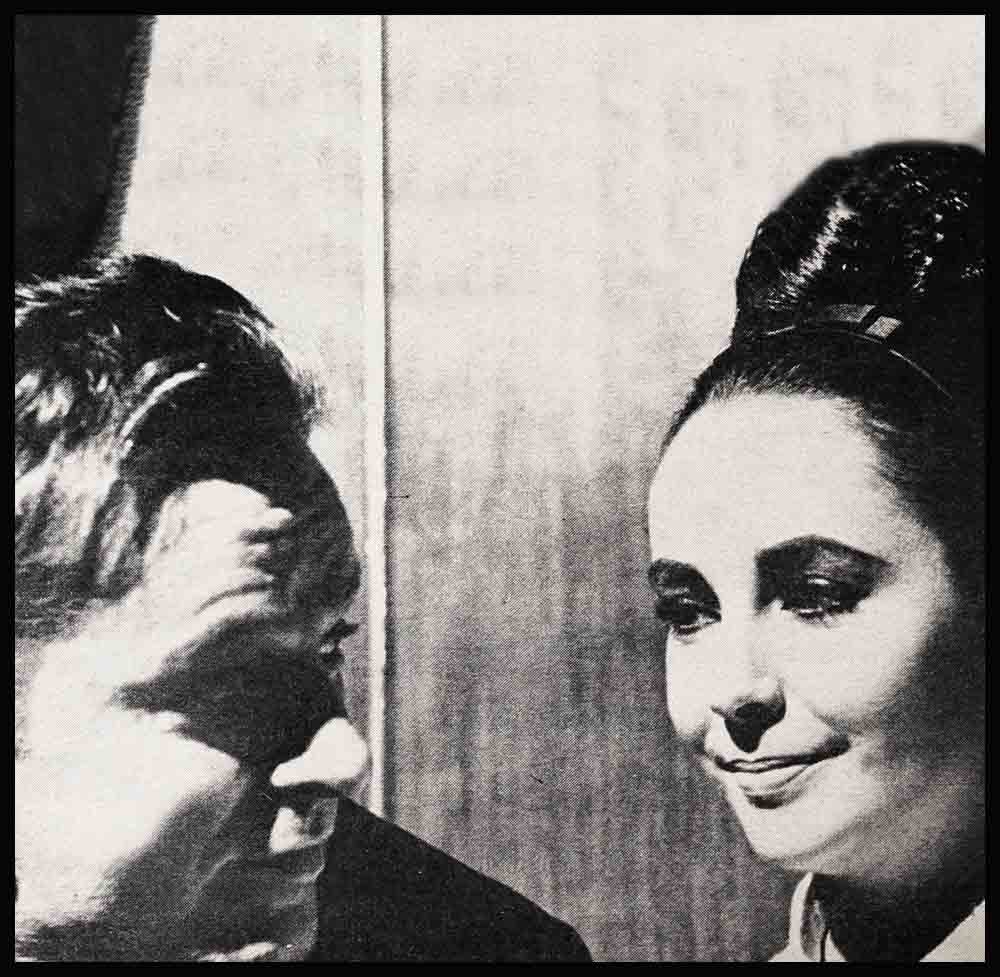 “I have taken all I can of this nightmare labyrinth of a marriage. Enough is enough. That well-known breaking point has long passed. I am not going to go on with it. I’ve served my sentence. . .

Sybil Burton’s upper lip was properly stiff as she, in an exclusive interview with PHOTOPLAY, told this reporter her reason for giving her husband the kind of freedom he has been begging for all along.

And throughout the interview there was the imposing figure of Elizabeth Taylor lurking always in the background, casting her shadow over Sybil’s every word.

Sybil was making a deliberate effort to keep her voice and temper steady. She was in a spot that would have made almost any other woman hysterical and bursting with a Niagara of tears.

But not Sybil. She was a profound example of the bravest woman in the whole wide world.

“I don’t think anyone will question my courage for separating from Richard,” Sybil said solemnly. “We’ve had a go of it, you know, and I have no special position entitling me to any more misery than I’ve already suffered.”

This was the moment of truth—the moment when Sybil Burton had at last decided that the best course for her was a legal separation from the husband who had publicly deserted her and their two lovely children, Katherine and Jessica.

The place was New York City. The time was April 2, 1963. . . . And the whole wide world had just been jarred by another of those periodic blockbusting headlines that seem to erupt around Liz Taylor, Richard Burton and their mates wherever they go.

This time it was Mrs. Burton who stole the big black type on the nation’s front pages by flying to New York from London with her brood, and promptly announcing that she and Burton would henceforth go it alone.

Sybil. who played it calmly and coolly all the while that Richard romanced Liz in Rome, Paris, and London over the past year, had finally decided to give Burton the boot.

“It wasn’t a decision I reached hastily,” Sybil observed with a serious look. “I’ve had a long time to think about it. And, in fact. I have discussed it with Richard. You might say that we came to a mutual understanding regarding matters.”

Just what matters were brought to the head in their discussions were not revealed by Sybil, who said she was “entitled to have some anonymity in my private affairs.” However, a close friend of Sybil’s confided to one of Photoplay’s London reporters that Sybil told her: “At first I thought he would tire of Elizabeth. I did what I could to understand. But Elizabeth forced the issue, made understanding impossible. She wouldn’t stop. My marriage was more than a shambles. It was a nightmare.”

When Sybil woke up from the nightmare, she could only reach this conclusion: For herself and for her daughters a separation was necessary. And then there were the arrangements to make . . . legal, financial, all kinds of arrangements. . . .

“We have worked out arrangements on financial matters,” she told this writer. “and about visitation with the children. Of course, I retain their physical custody.”

Sybil’s decision was a direct about-face from her unshakable stand of the torturous past year when she had played the supporting role of the long-forbearing wife. refusing steadfastly to betray even the slightest annoyance at the disgraceful and shocking carryings-on of Richard with Liz.

Only last March Sybil had told this writer in an exclusive Photoplay Magazine interview:

“Richard is mine. He is all mine. He shall always be mine. I will never give him up to Elizabeth Taylor or to any woman. . . .”

And now. all at once, Sybil seems to have changed her mind over the ultimate course of her storm-tossed marriage.

“There are no plans for a divorce,” said Sybil with a quiet dignity. “Richard and I never considered nor discussed divorce. Yet we have agreed a separation is properly warranted at this time in view of the highly irregular pattern that our marriage has achieved.”

She refused to discuss Liz but it was obvious that the long-standing mockery Richard has made of his marriage was the reason Sybil had finally reached this State of exasperation.

It was plain to see what Sybil meant:

Liz forced me to give Richard up. But I haven’t given him up completely. He’s still mine. Maybe not all mine anymore, but neither is he all Liz’. He can t marry Liz so long as I hold on to him by the legal coattails as I’m doing now.

When Sybil arrived with her children. accompanied by their nurse. aboard the British Overseas Airways Boeing 707 jetliner from London, she was met at La-Guardia Airport by Aaron R. Frosch, the longtime family attorney for Sybil and Richard. The dolorous 114-day New York newspaper strike had just ended and reporters swarmed over her with an enthusiasm and verve that had long been missing in the city.

But Sybil, ravishing in a black-trimmed grey tweed coat and beret-capped golden tresses, didn’t want to contribute any news to the all-but-starved newshawks. She parried one question after another about Richard, about Liz and even about Eddie Fisher.

One of the more enterprising Fourth Estaters hooked the defenseless Sybil with a question that seemed to literally pop her eyes.

“Are you going to date Eddie Fisher while you’re in America, Mrs. Burton?” the young reporter asked.

Sybil did not answer with words—she only smiled a silent, mirthless smile.

Her attorney finally led Sybil. her children, and the nurse to a waiting station-wagon as newsmen and photographers followed in futile pursuit.

Frosch led the hounds of the press off the trail by throwing them a phony lead.

Of course, Frosch should have known better. For one thing, Philip Burton is not Richard’s father. As a matter of historical fact, Richard was born in the coal country of Pontrhydhfen, Wales, as Richard Walter Jenkins, son of a miner named Jenkins who is still living.

Philip Burton is a drama coach who providentially taught Richard to speak English properly after he shed his native Welsh dialect. Out of gratitude to him. Richard took Burton’s name when he went on the stage in London.

The upshot of the lawyer’s erroneous direction was the uncorking of an avalanche of newsmen and news photographers upon Burton’s apartment house at 33 West 67th Street in Manhattan.

The reporters and photographers found comfortable seats on two wide wood benches that flanked the entrance of the classic old apartment house. It was easy to watch the Street from a sitting position. As soon as Sybil and/or Philip Burton and the two little Burton girls walked in, they would be snapped up.

The lobby also offered another advantage—the door to Burton’s one and a half-room apartment could be seen from the benches. The Burtons couldn’t sneak by. The lobby was an airtight trap.

The hours dragged by without Sybil’s arrival, but newsmen bided their time by swapping stories about vigils for other stories. Finally the pessimists began saying that Sybil would never show up, that Burton’s small apartment would not be a likely place for his best friend’s wife and their two small children to stay the night.

They were saying it was much too late for the children to be up. And they were almost certain now that she was staying someplace else, and was already asleep.

Then suddenly, to break the monotony, a couple of reporters ambled out to the street for a short stroll in the exhilarating spring night—and all at once spotted Sybil in a parked car in front of the house, talking to a young man!

The reporters walked back to the lobby at a leisurely gait. They didn’t want to alarm Sybil with a mad fifteen-yard dash that would scare her off. And, besides, it was their obligation to alert all the other waiting reporters.

And how they did!

Sybil got out of the car and walked to the entrance, her blonde hair glistening brilliantly in the glow of the overhead Street light. Reporters and photograhers surged toward her.

Sybil halted in terror. Her mouth was agape and primed for a scream, when a sharp-eyed photographer stammered:

“So, who said I was?” the blonde sniffed hotly, strolling in a huff past the coterie of disappointed newsmen and disappearing inside the elevator.

As they resumed their vigil, somewhere else in that vast wonderland of glass and concrete skyscrapers and sprawling humanity which is the fabled isle of Manhattan, this reporter was with the real Sybil at her hotel, getting the story of how she was forced to give up Richard Burton to Elizabeth Taylor.

And at that very moment, 3000 miles away in London’s posh Dorchester Hotel. Mrs. Burton’s husband and Mr. Fisher’s wife were probably once again caught up in that little world of their own which seems to render them oblivious of all problems.

A very little world. indeed, if you considered the periphery of their adjoining suites . . .