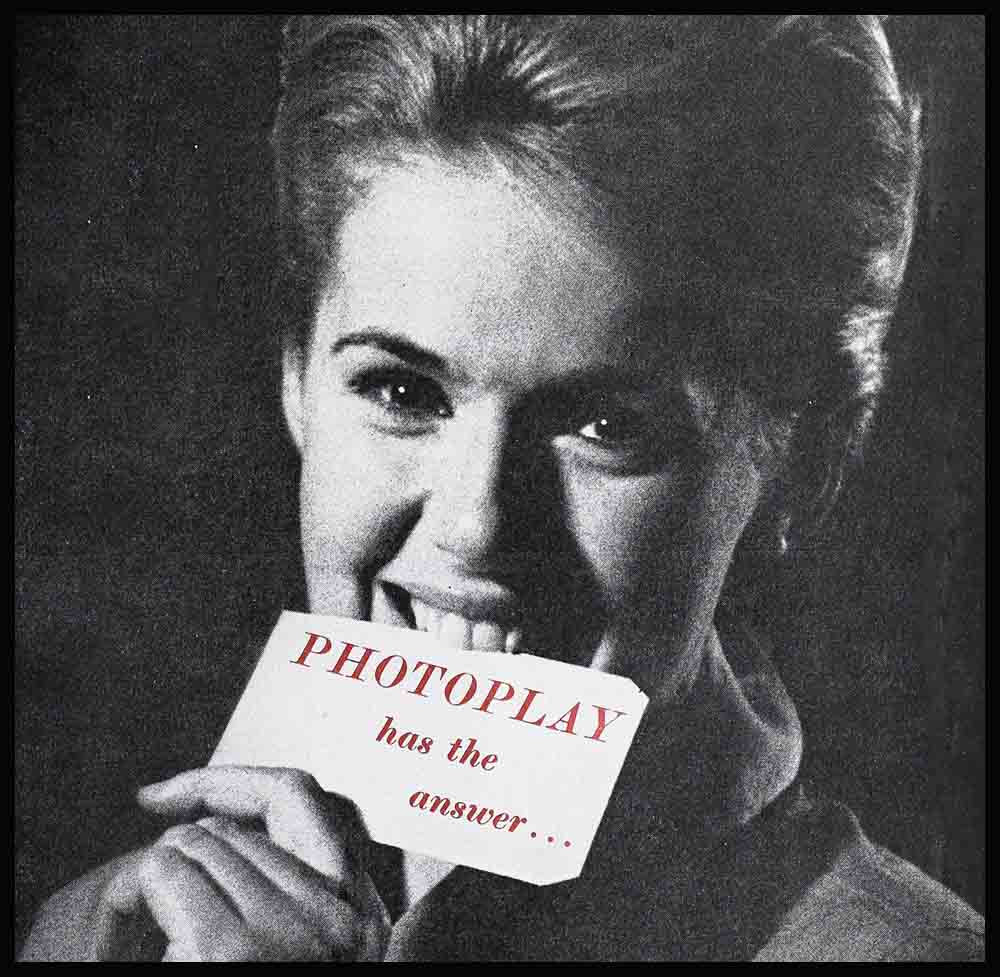 Two young actors were seated on bar stools at La Scala, an exclusive Beverly Hills restaurant. They were discussing, in low murmurs, two celebrities who were cozily nestled in a dimly lit corner booth.

“It’s incredible,” the other agreed. “He’s too old to date her. He’s old enough to be her father!”

“They”—the pair under discussion—were none other than Connie Stevens and Glenn Ford! The bubbling idol of the pony-tail set and the mature matinee idol! And whereas Glenn has dated other young stars before, it was Connie’s first romantic entanglement with an “older” man.

Nevertheless, they appeared oblivious to the stares and the whispers. Obviously they didn’t care a hang if their dating was exposed to public conjecture. Otherwise they wouldn’t have chosen to appear boldly in La Scala, where even the bus boys are hep to movie stars. They knew that by morning the news would be on the Hollywood grapevine, and they would become the most talked-about twosome in town.

But they lingered over the Italian dinner, occasionally clinking their wine glasses together. Long after they had sipped their demitasses they were still in the booth, talking and exchanging tender glances.

“Maybe the romance is for real,” an actor whispered to his date. She kept nodding her head—but in complete and utter disbelief.

Finally, a few minutes before the 2 A.M. drinking curfew and near closing time, Glenn and Connie casually (but not unnoticed) strolled past a cluster of staring patrons at the bar and out into the wintry wee hours of another December day.

By daybreak next morning the grapevine was running true to form. And as the weeks went on, the wonder grew. The steady dating between these two confounded even Hollywoodites hardened to surprises. Columnists “My, my’d” over the news that Glenn was taking Connie to the “Judgment at Nuremberg” premiere, to the party celebrating the “Majority of One” debut, and to the premiere itself. Columnists reported that they would jointly host a holiday party between Christmas and New Year’s. People began to catch on that they’d been seeing each other for two full weeks before anyone even realized that the romance between Glenn and Hope Lange had cooled off.

Now the big question has become: “What IS it with Connie and Glenn? Has she said ‘Yes’ to him?”

Photoplay has the answer. For though the two principals staunchly refuse to comment on their togetherness, some of their closest friends are not all that unwilling. And this is the story:

One day Connie happened to call on Delmer Daves at his Beverly Hills home. He is an old friend of hers, and some credit him with turning her into a finished actress. He was her director in “Parrish.”

As fate would have it, Glenn Ford happened to be there. He and Connie had never met, and Daves introduced them. Immediately their chemistry clicked. Glenn invited her to dinner that very night, and for the next two weeks they dated constantly. (At this stage, they went to off-the-beaten-track spots where no one who mattered would see them.)

Glenn Ford is in his forties. Connie is in her early twenties. The difference in age is wide, yet both are young in spirit. Both sparkle with vivacity, both like parties. Both have had their share of “pufficity.” And both—after what seemed like true romances leading to the altar—took detours and went on real dating marathons for the past year.

Connie’s merry-go-round started shortly after she and Gary Clarke decided to split permanently. Gary sadly came to the realization that he could neither support nor afford to be married to Connie.

Connie promptly resolved the situation by pouring all her energies into her career. This entailed being seen in public with the right escort to tantalize the gossip columnists, She seldom dated the same man more than a few times.

Elvis Presley entered her life last fail. She met him at one of the many Coke and popcorn parties he tosses at his leased Bel-Air home when he’s in town.

Now, Elvis’ dislike for Hollywood social life is well known. And Connie isn’t the type to stay home and watch TV. So they compromised. When they went out, they usually wound up at a small, obscure motion picture house in the San Fernando Valley. Elvis even found a way to guard their privacy there. Connie—on his instructions—would buy her own ticket. Elvis, further back in the line, would buy his. They’d enter the lobby separately, and seconds later meet in the darkened aisle.

Connie didn’t mind paying for her own movie ticket. And she avoided rubbing Elvis the wrong way, she didn’t talk about him to the press—(though she did let slip to talkative associates that she and El were secretly dating. Some things a girl can’t keep to herself.)

Nevertheless, Elvis suddenly bowed out of her life. One version of the break-up places the blame squarely on Connie’s pretty shoulders. Elvis had invited her, so the story goes, to spend a weekend on the mountain location near Palm Springs where his current picture, “Kid Galahad,” was being shot.

Soon after Connie arrived with her chaperoning sister-in-law, the fireworks started. It just happened that a photographer unexpectedly popped up in the rugged location terrain miles from nowhere. And the photographer just happened to be a friend of Connie’s. Mr. Presley immediately ordered a boycott of any pictures. And the episode ended what had been a beautiful friendship. Undoubtedly Elvis figured that Connie had tipped the lens-snapper that they would be together. Elvis hates to be used by a female for publicity. There have been many who tried; all immediately became ex-flames of Presley.

Soon Elvis forgot all about Connie. When the motion picture company returned from location, his long-time girl friend. Anita Wood, flew out from Memphis to help him forget.

Vic Damone, in turn, helped Connie erase Elvis from her mind. Connie was Vic’s guest one weekend while he was appearing at the Flamingo Hotel in Las Vegas. So much for Connie and her social life.

As for Glenn, many figured that when his divorce from Eleanor Powell became final, he would marry Hope Lange. Thousands of words were written on this romance. The divorce became final, but their love obviously was icing. Glenn then launched a dating campaign that saw him take Joan Fontaine to dinner three nights in a row, and on the fourth he’d be dining with young Diane McBain or Angie Dickinson. He saw Hope occasionally and they did a picture together, “Pocketful of Miracles.”

There were some who felt that Glenn was still holding a torch for Ellie, who’d been his wife for eighteen years and was the mother of their seventeen-year-old son, Peter. It was said Glenn sent her flowers whenever she opened her night-club act in different parts of the country. One of his friends swears that he pleaded to her, over the phone, to come back. If Glenn did try for a reconciliation, nobody except this one intimate friend was in on it. And in any event, it did not come off. Ellie—the new, slim, renovated Ellie—occupied herself with her exciting career comeback, and Glenn occupied himself with Hope Lange. While it lasted, the latter romance was one of Hollywood’s five-star specials.

Why did Hope Lange begin to bow slowly out of Glenn’s life? Stephen Boyd could probably answer that one. Steve, since first meeting Hope while they were making “The Best of Everything,” never denied that he was fascinated by her. However, at that time Hope was still married to Don Murray and seemed happily married. Steve steered clear of any romantic entanglements. By the time Hope did obtain a divorce, he was on a long movie-making junket to Europe.

Now Glenn Ford had a clear field until Boyd returned from London last fail. What Glenn didn’t know, however, was that Hope and Steve had been corresponding all this time. On his return they started dating.

So it’s easy to see that for all the difference in age, Connie’s life and Glenn’s life ran in ironically parallel lines. She had eyes for no one but Gary Clarke until they split. Glenn was a devoted and faithful husband to Ellie until their break-up. But after—both Connie and Glenn immediately barged into Hollywood’s social whirl. Both appeared hungry for nightlife; to be labeled as the life of the party. This they have accomplished, and if it’s attention they’re seeking—they’re getting plenty of it.

There are those who ask: Is their romance all publicity and nothing else? And others who say nonsense, this is a couple who are falling in love. The skeptics rebut that this supposition is highly improbable. The romantics reply that stranger things have happened in Tinseltown—look at Debbie Reynolds and Harry Karl. When they first dated, they created much the same sensation as Connie and Glenn. The odds that they would eventually marry were much too high even to contemplate. Yet it happened—and furthermore, the merger turned out a happy one.

Only time will tell. Distance becomes a factor, too. Connie and her new date face a long separation. This spring will find Glenn making a film, “The Grand Duke and Mr. Pimm,” in France. Strangely enough, Hope Lange is his co-star. This deal was set when the two appeared only a few feet away from the altar, but it still holds.

While Glenn’s abroad, Connie remains in Hollywood. The separation could close another chapter on Connie Stevens’ bold romantic ventures. On the other hand it might not.

Photoplay goes along with the romantics. For we know that Connie has said “Yes” to Glenn. And that the kind of “Yes” she has said is a prelude to romance and possibly love.

These are powerfully promising “Yesses” from a young girl to a considerably older man.