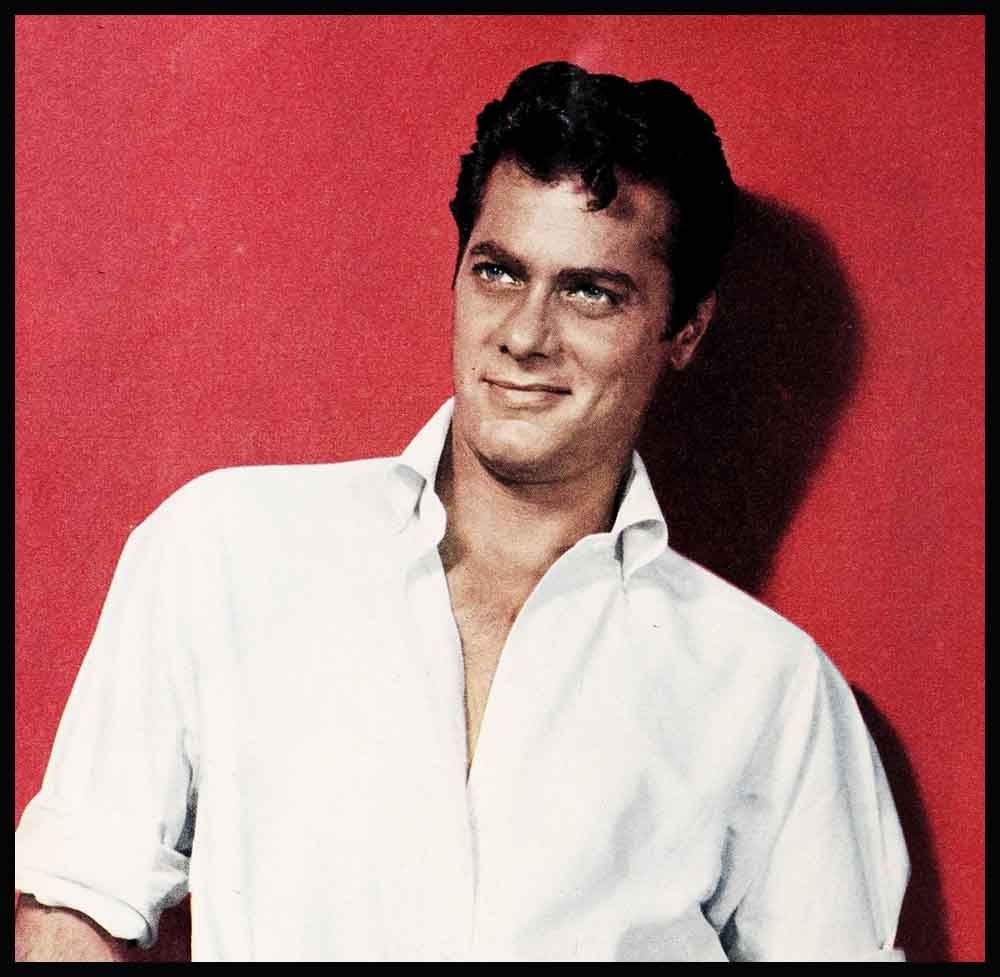 Rebel In A Button-Down Collar?

The other day, Tony Curtis walked into a restaurant in Beverly Hills to keep an appointment for an interview. He was wearing a pin-stripe gray suit, a white shirt with the collar buttoned down in the best Madison Avenue style and a most sincere tie. He looked like an aspiring young bank executive. And it wasn’t hard to visualize in the background the Mercedes-Benz he drives and the three-wheeled Messerschmidt he’d brought back from Paris along with a graceful smattering of French phrases.

Lucky guy, he has a beautiful wife, a movie star in her own right named Janet Leigh, and a year-old daughter, Kelly Lee. When he entertains, he does it graciously in a home made comfortable with original French abstract paintings. He has a spacious swimming pool and a telescope with a six-inch reflector—Tony’s pride. And recently, he announced the beginnings of his his own production and management Corporation called Curtleigh.

Yet, it took no strain—it seemed like only yesterday—to remember when Tony Curtis first landed in Hollywood—some nine years ago. There were no photographers or reporters waiting to greet him ‘then. In fact, the first anyone heard of Tony was a few buried items in the local columns. Who knows whether they were true? One lady columnist insisted that Tony Curtis was “impetuous,” others mentioned his friendship with a newcomer, Marlon Brando, who was then setting the gossip circuits ablaze. Then hot rumors began coming off the sets of “City Across the River” and “The Prince Who Was a Thief” and interviewers began scram bling to get this Curtis fellow on their pads. But the consensus was: Another rebel type, wait and see.

Tony was a rebel, in his own way. In those days, he’d arrive for an interview wearing a green plaid jacket (a little loud even for Hollywood), a navy blue sports shirt (no tie and no button-down collar either) but with his shoes highly polished. No one could doubt that he took time in dressing—in his own way. As he admitted, he doted on clothes, collected shoes as other men collected pipes and would consider himself a success when he could buy suits by the half-dozen. Not a torn-shirt rebel, by any means.

All the same, Tony Curtis, then as now, is his own kind of rebel. As Bernie Schwartz of the Bronx, he made no attempt to use his Hollywood monicker to hide his pride in the Schwartz family and tradition. And as a kid who barely skinned out of a boyhood of juvenile delinquency, who refused to forget in all its painful detail his New York street-gang education, he was bound, in ways, to rub some people. “You’re a sissy if you let them push you around. You’re a sucker if you don’t fight.” Until Tony found his ambition to be an actor, his fists were better developed than his character. Inevitably some of this stuck right up to and into his early Hollywood days.

But, says Tony today, “I wasn’t a rebel then. I was scared.” Hollywood was a big step from the Bronx, where only a few years before he’d been dragged off the streets by a truant officer and told to straighten out or else.

“People resented me even in films,” Tony will remark thoughtfully. “I’d come on screen with a nice face, nice clothes, a nice car and a beautiful girl, and everyone hated me. It was the same thing in real life.” Such was this fighting, sensitive boy’s picture of himself in relation to his new world of those early days, and perhaps—but not likely—it was true; certainly his roles in such films as “Johnny Stool Pigeon” might have reinforced the impression. True or not, the feeling may even hang on today.

But such painful lapses in self-confidence are not the whole explanation. Tony Curtis of the Bronx hit Movietown as an exuberant, devilishly handsome beefcake hero with curly black hair. He was madly daredevil in his humor, forthrightly honest in his serious moments. This, too, kind of pinned him with the “rebel” tag. Hollywood doesn’t always understand honesty.

When Tony came in from the East, fresh from a GI education at New York’s Dramatic Workshop and a couple of seasons in the off-Broadway theatrical dungeons (“In those days ‘off-Broadway’ really meant ‘off’—over in Newark, mostly!”) his great idol among the movie heroes was Cary Grant. That he selected the suave personality, adroit comedy and fabulous charm of Mr. G. for his model sets him apart at once from the Brando-type rug chewers, that’s for sure.

“He was the best actor I knew,” says Tony. So great was his admiration for Cary that he used his idol to cover up a bit of shyness when he first began courting Janet Leigh. Such secret diffidence on the part of this tali and handsome youth who had already dated Hollywood’s prettiest was unperceived by the ordinary observer at the time, but it was there. When Tony first called Janet at home, he announced in his best nasal drawl to her mother, who answered the phone, that it was the famed Mr. G. who wished to speak to the daughter of the house. (Janet’s never admitted she was fooled, incidentally.)

“I was afraid Janet wouldn’t talk to me,” Tony says. He admits that he used to save Cary Grant’s pictures, at a time in his life when other boys were collecting ballplayers.

But perhaps Cary would not have said, as Tony did in a typical Curtis sound-off recently, “I don’t see why we have to go in for that phony stuff. It says in the official story of my life that my father is ‘a well-known Hungarian actor.’ Well, Hungarian he was. Actor he was, in Budapest, but not a very successful one. Right now he’s a tailor, as he’s been ever since he landed in this country.”

Hardly a belligerent statement, merely the truth, yet a lot of people hearing such remarks didn’t look under the surface to see that “rebellion” was coupled with the warm and winning Curtis charm. This too is evidence that Tony’s state of rebellion, if there ever was one, is an out-of-the-ordinary sort of thing.

Today it is this odd combination of rebellion and charm, of mischievous humor and serious aspiration, that is the secret of Tony’s heartwarming effect on people—that made him a hit in Paris, for instance, when he went there to make “Trapeze.” “Those French taxi drivers are rare, really rare,” says Tony, smiling in remembrance. “Driving at night, they always sing—and loud.

“They’ve got a real great attitude, the French,” he goes on. “They really believe in ‘live and let live,’ and the right of the individual to be an individual—to be and do whatever he wants. If I felt tired and my feet hurt after standing around the set all day, I could sit right down on the Champs Élysées and take off my shoes—nobody gave me a second look.”

One evening after a hard day on the “Trapeze” set, Tony related, he didn’t feel like changing for dinner. In striped jersey and old slacks—the work clothes for his strenuous Hecht-Hill-Lancaster role which he did before “Sweet Smell of Success,” the one he is doing for the same outfit currently—he just walked around the streets of Paris until he found “this little Italian place where you buy food to take out. I got a pizza and some fresh fruit,” he relates, “and ate them on the way back to the Georges V hotel. Nobody even gave me a second glance—except some Americans I ran into on the steps of the hotel. They gaped indignantly, obviously wondering how I got past the doorman.”

Ask Tony whether this exuberant urge to independence, which luckily he shares with his lively and uninhibited young wife, ever gets turned around backward into family squabbles—and you’ve got yourself a threatening storm. “Sure we squabble—or used to,” he mutters over a jutting chin.“And don’t make me say, ‘What married couple doesn’t?’ What gets me, and has for years, is the way these things get built up. You know, for a long time Janet and I have been treated like spoiled kids, not allowed to grow up. Maybe a few years ago we were just kids, but now we’re growing up fast. We plan our careers and our futures—and Kelly Lee’s—like adults. That’s why we’ve formed this family Corporation.”

Talking about Tony’s exuberant honesty, which is sometimes misunderstood, and referring once more to the difference between the Bernie Schwartz type of rebel as opposed to the Marlon Brando-torn-shirt school, it seems that there was a recent hassle in the press about something Tony had blurted out in this connection.

According to the reports, Mr. Curtis had visited New York City and observed some of the students of the famed New York Actors Studio in action, and had sounded off with no holds barred on what he thought of them and their “method’—which includes elaborate mental and emotional exercises such as pretending to be an inanimate object like a tree or a pincushion.

“I was in New York shooting for ‘Sweet Smell of Success’,” says Tony. “All I did was point out that this so-called ‘method’ had been practiced for at least thirty-five years before they came along. That’s all.”

But what about the early career of Tony Curtis in Hollywood, when he was all but tagged a rebel in a plaid jacket, a friend of Marlin Brando, and all that?

“Marlin Brando has his own special quality,” says Tony. “He didn’t learn it from that group in New York. Actually, all their mumbo-jumbo amounts to is what they’ve copied from him.”

Yes, the newspaper reports of the discussion included the word “copycats” as part of the Curtis critique on the acting art as practiced in certain quarters. Also, “They belittle everything that goes on in Hollywood.” And “They think in order to be a success like Marlon you’ve got to be rude, slovenly and walk around in dirty clothes.” Strong language!

“Did I say those things?” Tony grins. “All I know is what I read in the newspapers!”

There you are. Sit back and look at this boy who speaks his mind when he has the urge, who insists on his right to eat pizza on the boulevards of Paris, who swings back lustily when he thinks the press is unfair to his marriage and his wife, who is as proud of the fact that his father is a tailor as he is of the one that Bernie Schwartz was born in Manhattan’s Hell’s Kitchen—a boy who wears his pinstriped suit and button-down collar with authentic flair, who can kiss a girl’s hand as they do it in Paris, and half-jokingly in his case, yet naturally, too. And you’ve got a picture of a rebel of a special sort. Even if he doesn’t like the word.

“If you mean I’m a rebel because I like Hollywood, don’t have a yen to ride down Sunset Boulevard on a motorcycle and didn’t learn acting by pretending to be a pincushion,” says Tony Curtis, “you’ve got something.” 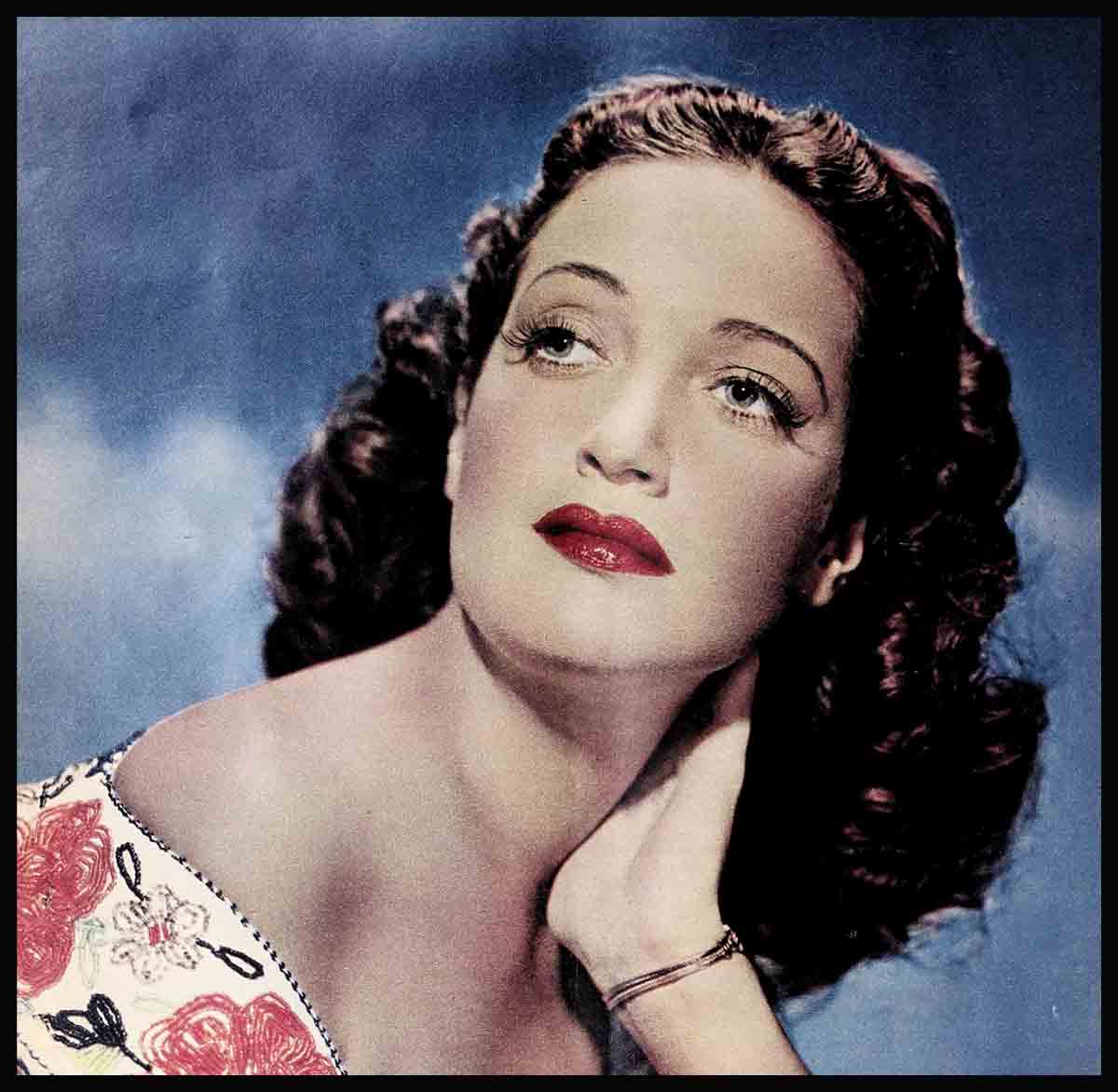 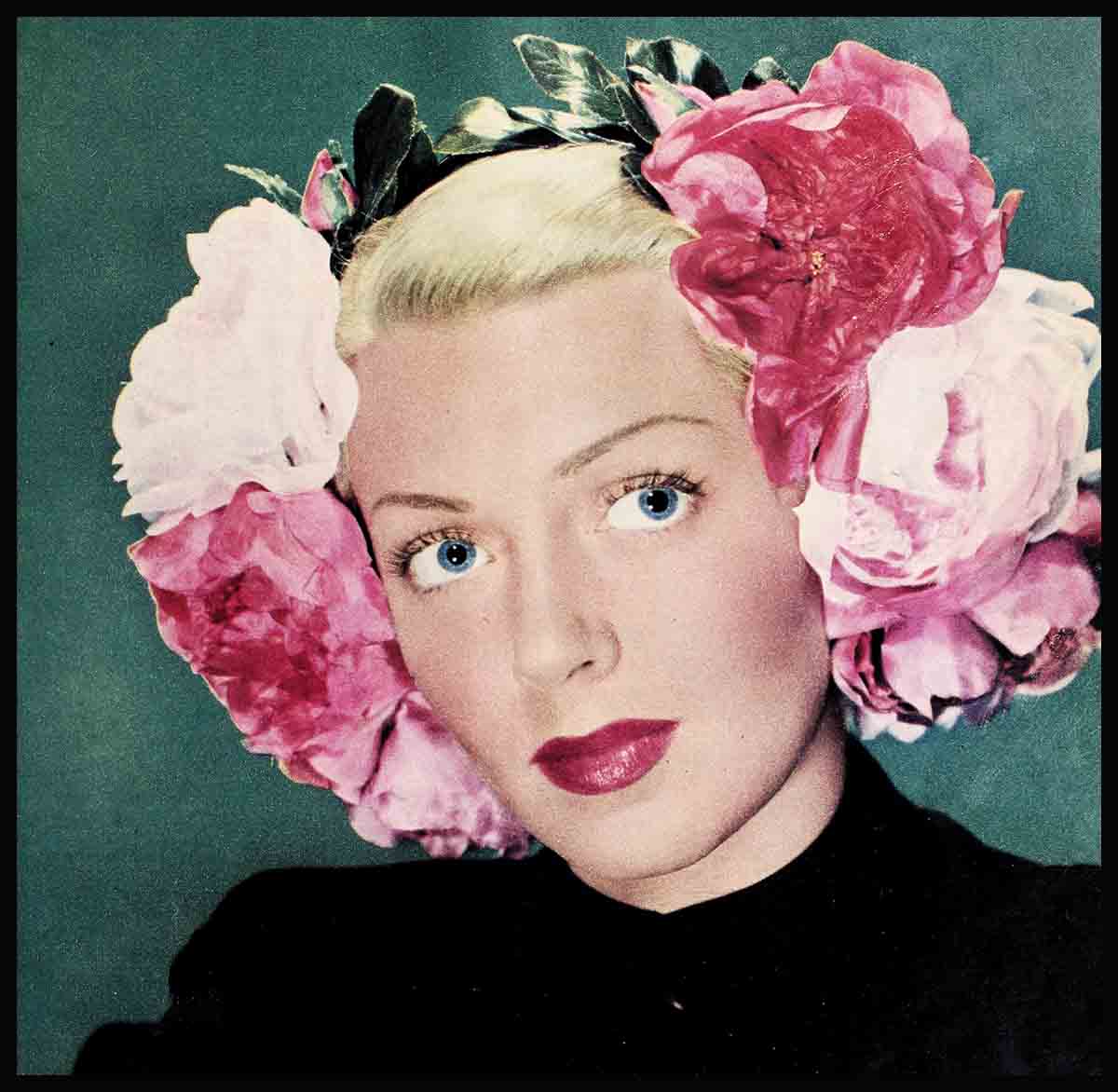 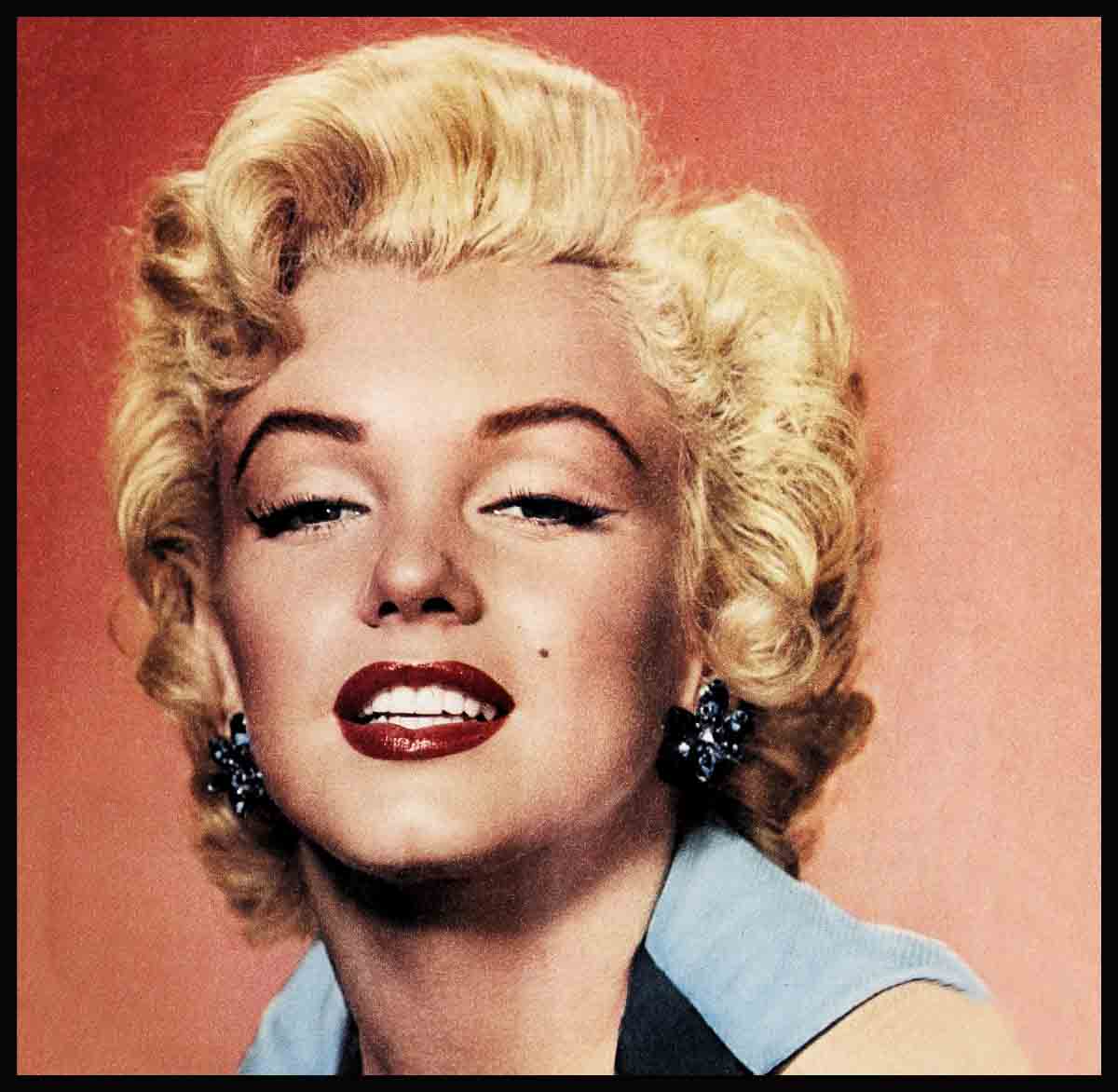