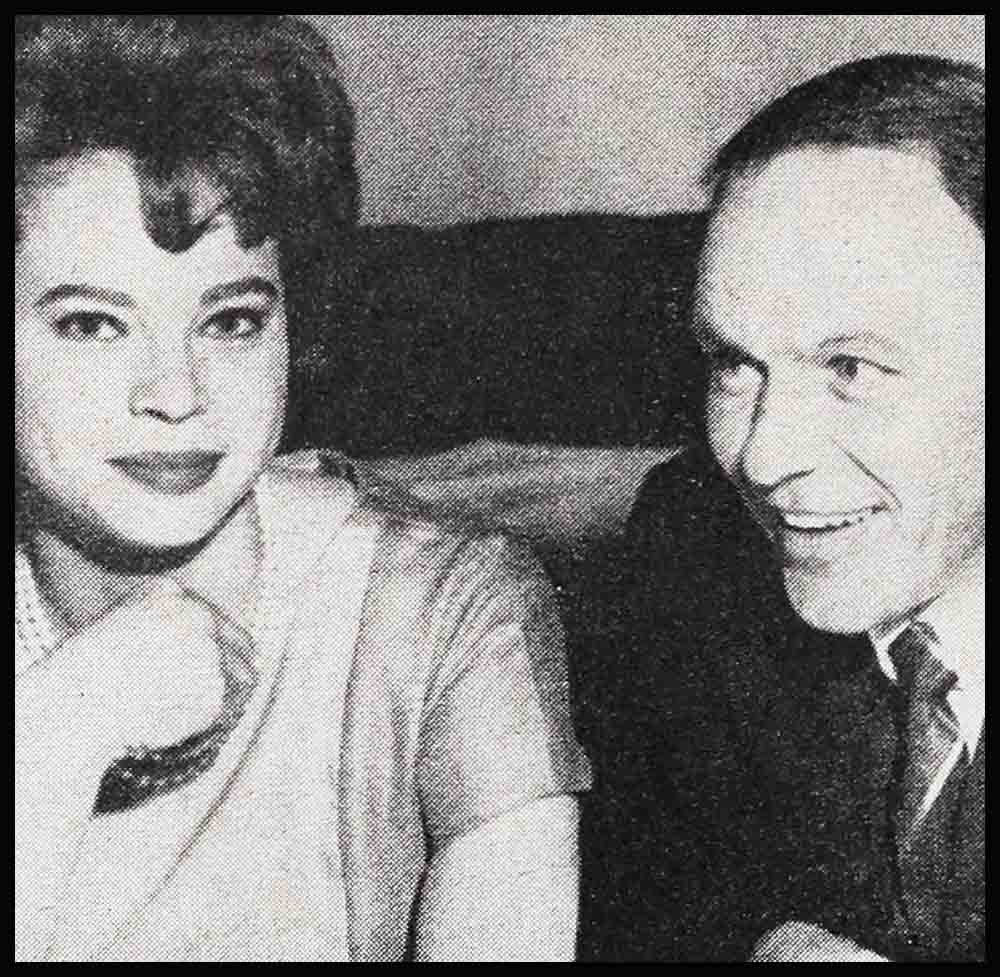 To work or not to work—was that the question? Whether ’twas far better to be the third Mrs. Sinatra without a career to her name—or just Juliet Prowse with her name in lights—was that the issue?

Whatever—they played fair to the end. Juliet announced the engagement and Frank announced the break-off. On January 9, when Frank gave her the go-ahead signal, Juliet had the fun of stunning Hollywood with the surprise Engagement of the Month. But it lasted longer—they were betrothed for six weeks—during which Juliet was showered and showered—with offers from movies, TV, night clubs. If all the stories printed about the startling romance between the 25-year-old redheaded dancer and the 46-year-old crooner were stretched end to end. they’d have reached from Hollywood to South Africa—where Juliet was photographed hugging her mother and showing the ten-carat diamond Frankie bought her.

But already there was a worm in the apple in the Garden of Eden. Immediately after the engagement, Juliet had said she would not quit her career after marriage. But Frank said she would. Then Juliet flew home to South Africa. Maybe it was her mother’s influence, maybe it wasn’t—but whatever it was. Juliet announced. from Africa. “If Frank insists that I give up working, then I shall yield to him. I think a man should be the boss and a woman should stay in her place. I like a man who is a hunter and a leader.” She was further quoted as saying, “Frankie’s word is going to be law. I want to give up my career and have lots of babies.”

Juliet came back from South Africa on February 10, but for all those dutiful words it was reported that Frank neither met her at the airport nor sent a car.

Nevertheless, vague marriage dates were mentioned—in the same breath with problems of conflicting work schedules. “My problem is my film and TV commitments,” Juliet admitted. “I have a stack of those and they mean my career to me. This is what Frank and I have to sort out.”

But only the day-before-the-end, Frankie let it be known that he was starting a round-the-world tour of benefit shows for children’s hospitals and orphanages, and Juliet would be along as Mrs. Sinatra. “The tour will start March 25, and Juliet and I will be married before I leave,” he said. The benefit-honeymoon would take them to Mexico, Japan, Hong Kong, Israel and Europe.

The next day Frank’s office sent out this item: “Juliet Prowse and Frank Sinatra today disclosed they have called off their wedding plans. The pair in a joint statement said: ‘A conflict in career interests led us to make this decision. We both feel it is wiser to make this move now rather than later.’ ”

Or was that only a publicity story?