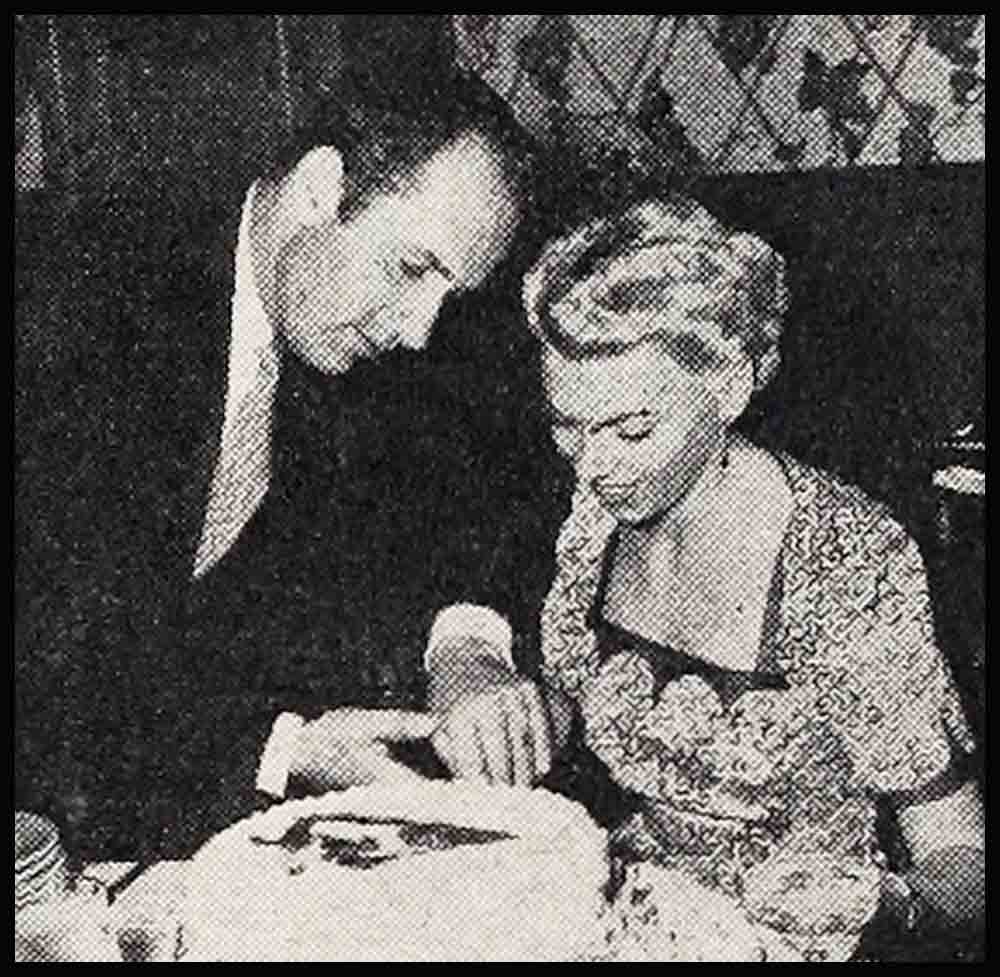 The talk these days is centering about the Donald O’Connors, who finally got around to making a legal move to end their marriage. Gwendolyn’s moved out several times in the past—but she has always come back when Donald’s beckoned urgently enough. Hollywood wonders if she’ll really go through with her divorce this time, or if they’ll kiss and make up before the ink is dry on the final divorce decree. Funny how sometimes in Hollywood marital bliss withers when the hot wind of professional success blows on it. Things have never been better for Donald in his career, but it hasn’t seemed to bring him happiness.

The Gary Coopers, who appear to be friendly, and who go out together now and then, keep causing speculations about a reconciliation—but they continue to live apart. Gary, while he was in Mexico making “Blowing Wild,” was often seen with a cute model named Lorraine Chanel. He’s been playing the field for the last couple of years. Sort of “blowing wild” in person.

There’s possibility of a crack-up of the seventeen-year-old marriage of Claudette Colbert and Dr. Joel Pressman. Despite their denials, friends are worried about the fate of this marriage, always considered one of Hollywood’s most perfect unions. Claudette has been living in her native France for the past two years, and doesn’t seem in any hurry to come home. In the meantime, she’ll be about $500,000 richer from her sojourn, because of the income-tax immunity while over there.

Keenan Wynn still carries the torch for his lost Beetsy, who seems to be all confused about her romance with Dan Dailey, who is confused about everything. Keenan, who always hoped to get Beetsy back, told me he was almost kayoed when he read about her engagement to Dailey in an old newspaper he picked up in Korea while over there with a troupe of film personalities entertaining the GI’s at Christmas time. Since the break with Dailey, however, Beetsy has been seeing a lot of Keenan—so maybe they’ll get back together again. In the meantime, Dan is moving to his new ranchito in the San Fernando Valley, where he has two rooms for himself and six stables for his horses.

It’s true that Frank Sinatra continues to play high, wide and handsome with his career, all for love of his Ava. The town was distressed—though not surprised— when he cancelled out on a TV show at the last minute to fly to London to see Ava, because he hadn’t “had a letter from her for a week.”

The big question mark still punctuates the reports that all is well with the Gregory Pecks. He tells friends every thing is okay. And she tells friends just the opposite, although, when she spent a weekend in Las Vegas not long ago, she passed the word around that the trip had nothing to do with a possible divorce. It was, said Greta, only to attend the wedding of a friend. In any case. Greg will be away from Hollywood and home for a long time, with several more picture commitments abroad.