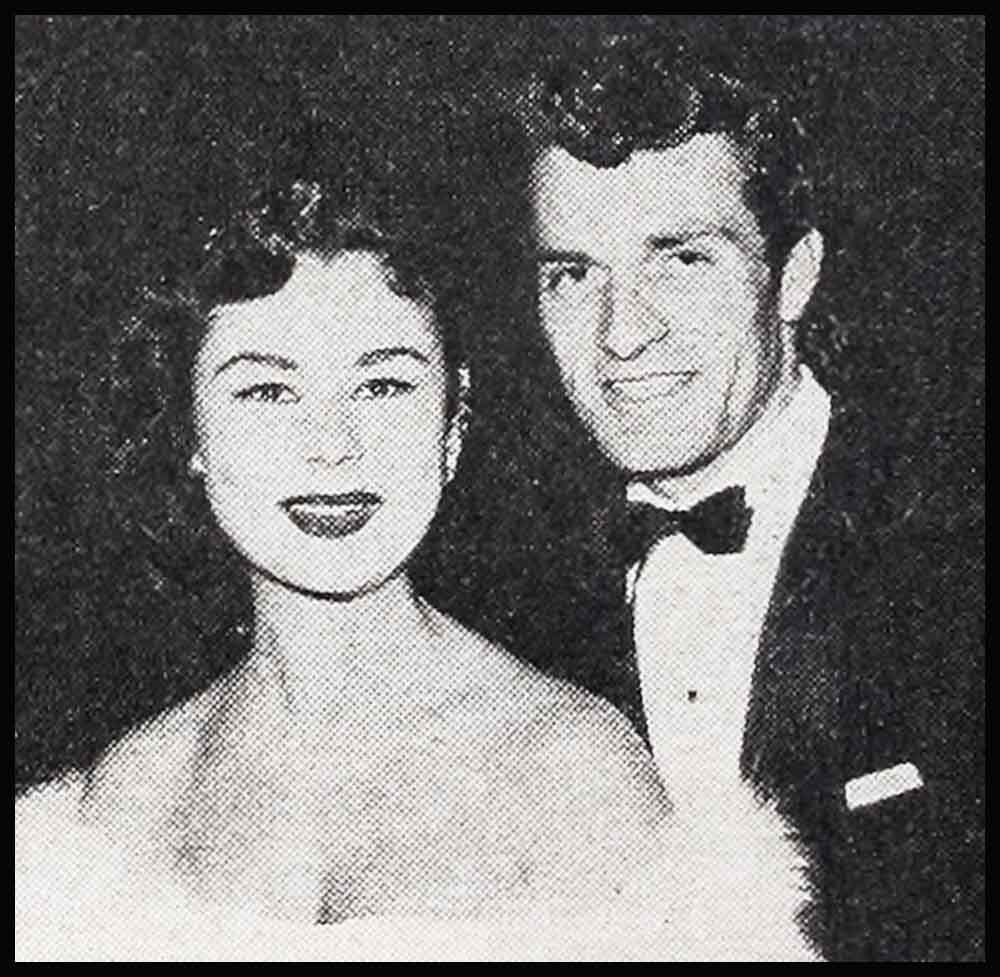 PARTIES AND PREEMS in bunches this time! Heading the list was the shindig before. during and after the opening of “Call Me Madam.” Ken Murray was in the foyer, greeting stars galore for the video cameras and Ethel Merman (even though she couldn’t be present) became the overnight toast of Hollywood-town. What a night!

On with “the show”: Jeanne Crain, wearing rhinestone earrings as big as chandeliers, with Paul Brinkman; Piper Laurie, in flow-er-trimmed white, with a white ermine stole —on the arm of Leonard Goldstein.

Also present, were Susie Zanuck with Bob Wagner; Dawn Addams with Farley Granger; Terry Moore with Nicky Hilton; Debbie Reynolds with Bill Shirley. To say nothing of Marilyn Monroe, a slinky sylph in a simple, tight-fitting (wot else?) white satin, strapless sheath—white fox stole slung around her shoulders—and no jewelry. Her hair-do, a longish, almost pageboy bob, with just a suggestion of bangs across her forehead. And, oh, yeh—matching white satin gloves that ended exactly where her gown did—across the bust-line —low bustline! Janet Leigh, seated beside us, wore a white and silver gown—with the lowest neckline of anybody’s—and a dark, starlight mink stole; Anne Francis in a silvery-coated white taffeta gown; Virginia Mayo; the Tony Martins—I could go on forever about glamour-pusses glimpsed!

Don’t want to make you “hair-sick”—but Mitzi Gaynor, aside from being in floor-length white crepe, topped by white mink stole, was also wearing her new very dark hair, liberally sprinkled with silver dust. Looked right purty—but Hugh O’Brian, who danced with her, got most of the silver on his tux—and his cheeks. On account of the cheek-to-cheek way they danced! Evelyn Keyes, back from France, sported something she called “my own color,” she should have said “colors”—a mixture of brownette (natural) with various shades of bleached strands from golden blonde to almost white—giving a sort of sunburst effect!

Some style tips to the style hep: When a wise lady finds a becoming color, silhouette or “accessory,” she sticks with it—makes it sort of her “trade-mark.” Take Lana Turner’s passion for black or white—she’s gone through whole pictures and entire seasons wearing no other colors. Rosemary Clooney, who knows blue is heaven for her, keeps wearing it again and again. Roses, silk or velvet, white, pink or red, have become almost a “stamp” for Ursula Thiess. She wears them with dresses, suits—or as hats. Betty Hutton is never without at least two hand-knit dresses. Barbara Stanwyck is that way about pink! There’s nothing wrong with stressing the things you’re happiest with, if they suit you, regardless of fads.

A cozy and warm party was the one the Masquers Club of Hollywood gave to honor Lucy Ball and Desi Arnaz at a “Mr. and Mrs.” dinner. Roy Rogers and Dale Evans, Ozzie and Harriet Nelson (she stunning in a semi-summer pastel bouffant of starched organza), Gracie Ailen and George Burns, Barbara Britton (hiding her “expectin’ ” with an exquisite, heavily embroidered cotton shortie evening dress), Marjorie Reynolds, Bill Bendix and lots more movie and TV personalities were there to pay tribute.

Some of the standouts for shape, style and beauty at a party at the Bel Air Hotel included Mitzi Gaynor (with Hugh O’Brian again) in red, trimmed with black. I did a little “research” on Mitzi’s oomphy figger. She was wearing no stays, push-ups, wires or “cinchers.” Quite a shape to drape, that one! Jane Russell was regal in slinky floor-length black, trimmed with black beads, with a huge stole of black crepe, also heavily beaded. Leslie Caron, usually no fashion-plate, looked quite chic in starched red lace. Terry Moore wore an ivory ribbed-taffeta, strapless bodice, the long skirt draped to the back where a huge bustle of matching tulle cascaded to the floor. Marge Champion (her Gower was wearing the brightest pink shirt!) was in full-skirted white taffeta with a sash of garnet silk that formed a slight bustle in the rear. Cute Patti Lewis lifted her ankle-length green taffeta skirt to show me white petticoats—trimmed with ermine tails!