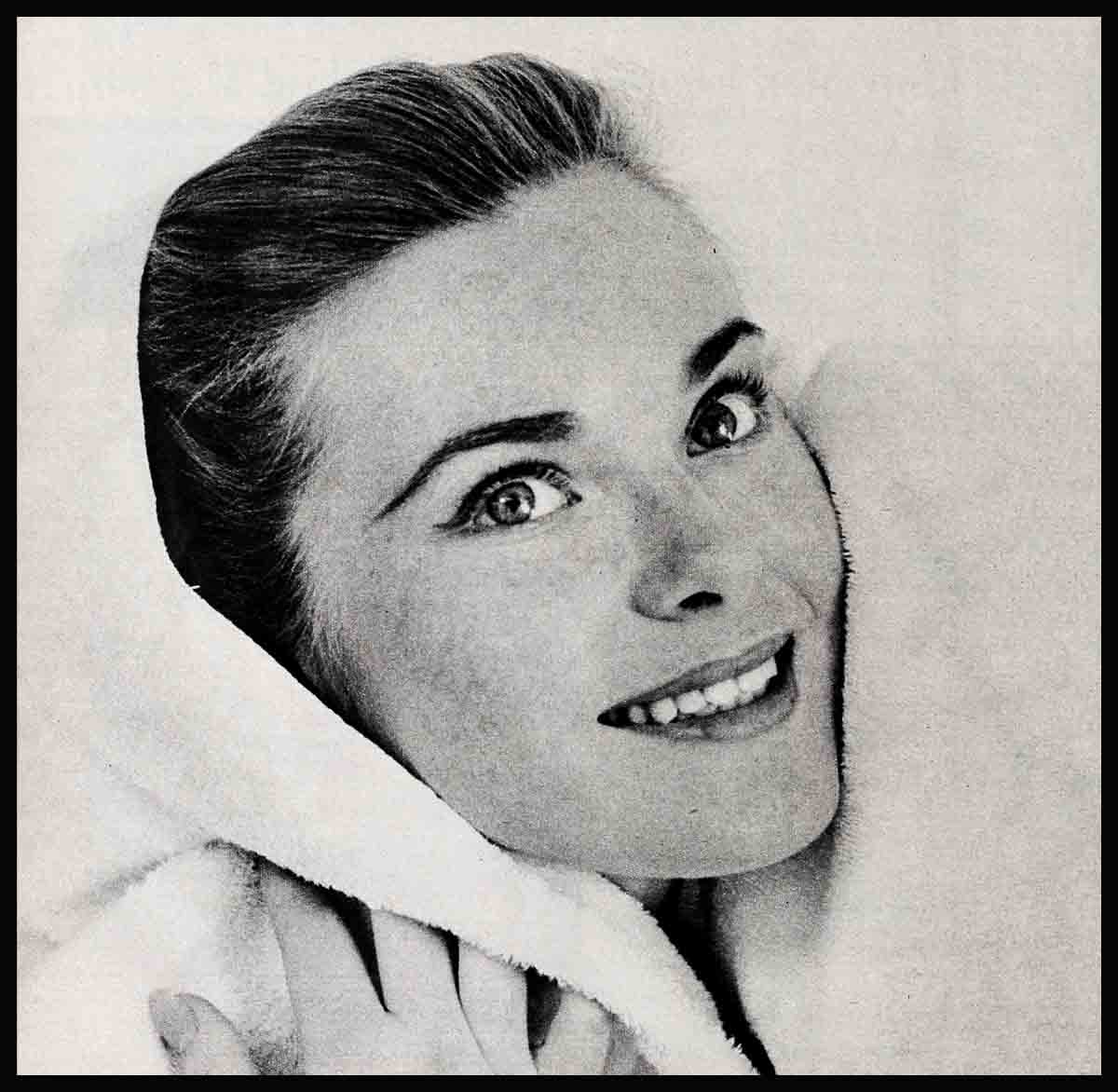 It’s a rare girl who dreams of becoming a movie star—and does it. Practically overnight! Just as unusual is a seventeen-year-old who’s discovered where beauty really begins and how to develop it. Natalie Trundy is both. You’ll see her talent prominently displayed in two new U. A. releases, “The Monte Carlo Story” and “The Careless Years.” For one of her first national-magazine appearances, Photoplay brings to you Natalie’s system for turning young natural assets into the kind of fresh, scrubbed, flower-like good looks known ’round the world as “American.” Blond and blue-eyed, with flawless complexion, Natalie admits that sparkling eyes “happen when you’re doing what you want to do more than anything else in the world.” The corn-silk hair, she says, “came with the rest of my face.”

About her smooth, dewy skin, Natalie firmly rules out luck. “No matter what a girl’s coloring,” she insists, “good looks start with a clear complexion. And that means inside as well as outside care.” The inside story begins with the right groceries, says Natalie, who scorns what she calls “empty calories”—foods lacking important nutrients, vitamins and minerals. She gets these skin beautifiers in meats, eggs, fresh fruits and vegetables, says a firm “No” to sweets, spices, fried foods, chocolate and rich desserts. She loves liver, with its mammoth amounts of iron, reaps extra protein benefits from cottage cheese (her favorite salad dressing), turns up her already tilted nose at coffee and soda fountain treats to drink, daily, four to six glasses of milk, four or five of water. Result: the kind of translucent skin tone that comes only from inside.

A veteran at seventeen, Natalie became a child model at ten and played feature roles on top TV programs while attending Professional Children’s School. Always with her eye on Broadway. She made it, appeared at thirteen in “A Girl Can Tell,” and later, with Shirley Booth in “By the Beautiful Sea.” Like most models, she’s learned that enough rest is a must for a smooth, radiant complexion. “During the week,” says Natalie, “I have no dates and try for ten hours of sleep.” Part of the glow, she admits, comes from lots of tennis, swimming, riding and iceskating. But when juggling a busy schedule leaves skimpy time for fun, she fits in the fresh air and exercise she needs by walking to and from appointments and walking her three French poodles. (Two were a surprise gift from Sam Taylor, director of “The Monte Carlo Story.”)

With the creamy coloring that usually comes with freckles—she’s got those, too—her skin is remarkably free of the blemishes that plague most teens. “It’s not for nothing,” says Natalie, a soap and water fiend, who insists on treating her face to a thorough sudsing three times a day—come European location trips or endless TV rehearsal grinds. She’s learned what dermatologists confirm, that soap is mildly antiseptic, killing some of the bacteria that cause trouble and lowering the vitality of others. “A good sudsing,” she adds, “not only whisks off soil and stale make-up and helps prevent bumps, it also tones up muscles and stirs up lazy circulation.”

This takes more than a fast pass with a soapy washcloth. Natalie’s “facial” begins with a mild soap, worked into a rich lather and massaged well into her skin with circular motions. Just as important is thorough rinsing with warm, then cold water until no speck of suds remains. “When I think I’ve rinsed enough—then I rinse some more—and dry with the roughest towel I can find. I guess I sound like a real-life ‘soap opera,’ ” laughs the shiny-eyed girl with the glowing career—and complexion to match.