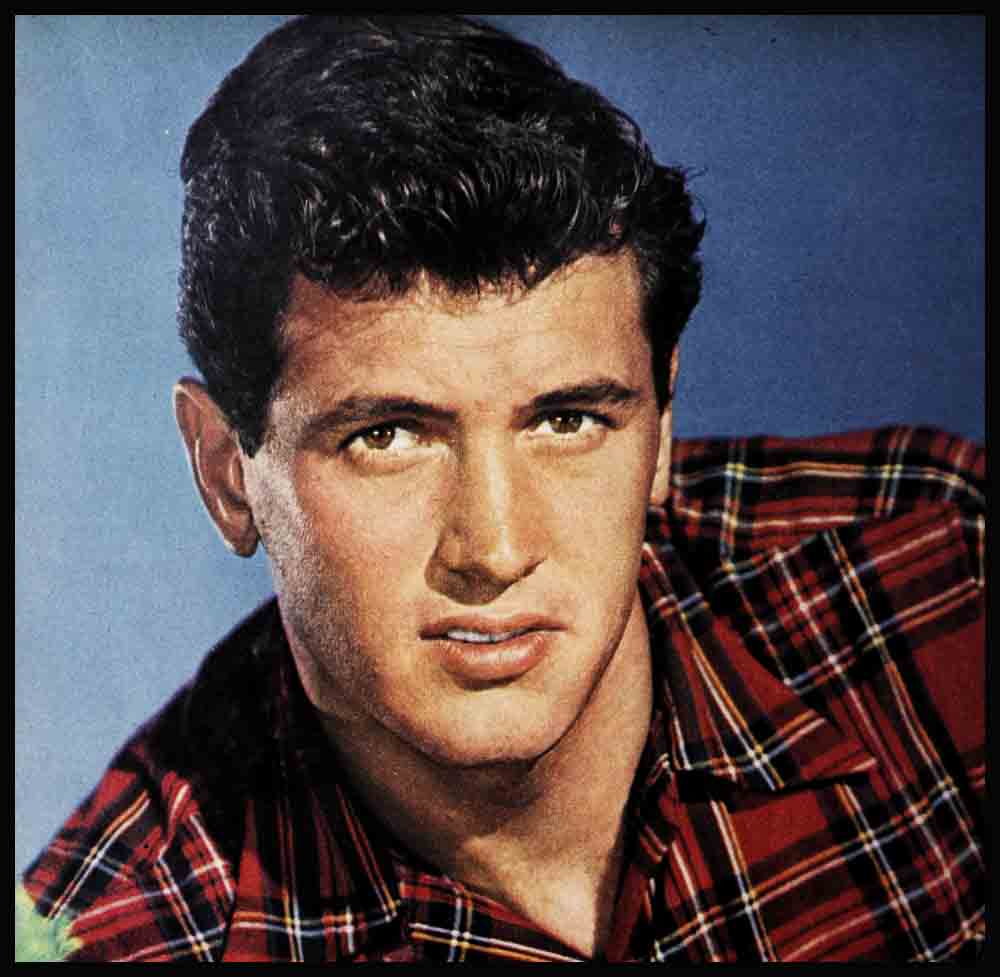 Rock’s A Good Man To Be Around

They all sing the same tune about Rock Hudson. His circle of friends is vast and varied, ranging from star to script girl, from bashful newcomer to neighborhood butcher. Friendship with Rock is the only thing most of these people have in common. But ask them what he’s like, and each and every one joins in for a perfect close-harmony act. Facing such a unanimous opinion, you have to believe it; you can feel that you’re close to Rock as he really is. Listen to Piper Laurie: “Rock’s one of the best friends I have, my sure cure for the blues. I love to be with him—on a date, on the lot, anywhere. If my life depended on it, I just couldn’t worry or be unhappy when I’m with Rock, because he won’t let me. One hint of a frown, and he teases me out of it and has me laughing before I know it.”

Of course, Piper’s a pretty girl. She’s also a star whose standing s equal to Rock’s own. Does that cheerful, considerate attitude of his change when he’s with a young actor, a near-nobody, yet a possible future rival? Race Gentry, fitting that description, says: “I don’t know how to explain it, except to say that I look up to him. Before we ever met, I’d heard a lot about him, because everybody said I looked like him. Then, the way it happened, I made my first picture with Rock. I played his son in ‘The Lawless Breed.’ I was plenty scared,” Race admits. “I did everything wrong, but Rock helped me a lot. You know . . . told me little things.

“Everybody had warned me that Rock was a great ribber, but I guess he thought I’d panic completely if he tried anything like that. He was just swell!” Then Race blushes with pleasure. “Some of the others kidded me, though. They nicknamed me Little Rock. Well, that’s okay. He’s everything I want to be.”

Famous face or new face, both the witnesses so far are in Rock’s own business. What happens when he’s off-guard, associating with outsiders? Stop in at the Longridge Market and talk to the three guys who run it—Joe Gonzales, Manuel Crespo, Harry Bell. As far as they’re concerned, Rock’s just a customer with the kind of loyalty any storekeeper appreciates. He started trading with them three and a half years ago, when the market was convenient to the little house he then rented. Now he lives quite a distance away, but he still zips over to the Longridge to do his marketing. Naturally, they know he’s a movie star, but to them his career is chiefly a fine source for gags, with Rock as target. Once in a while kids spot him and start begging the storekeepers for scraps of paper, on which Rock amiably scrawls his name.

But mostly he’s just a customer. “First thing he does when he comes in,” says Joe, “is pick out the biggest; best apple he can find. He lets us give him that one on the house. The more shopping he has to do, the more apples he eats. If he ever gets a deep freeze and comes in here to stock it, were going to run out of apples before he’s through!”

He’s a pretty smart shopper, all three tradesmen agree. He knows what he likes and picks it off the shelves for himself, and he knows about prices, too. Meats? “Ahh!” says Harry, the butcher, in genuine admiration. “He doesn’t want meat so often, but what he wants s the very best. You couldn’t fool this boy on a cut of meat!”

Rock seldom buys meat for the simple reason that he isn’t much of a cook. When he gets a hanker- ing for a good, home-cooked meal, he has a clever strategem to get around his lack of skill. He’ll invite a few friends—-maybe near-neighbor Betty Abbott and a couple, to make it a foursome, He has a theory that all girls just love to get into the kitchen and whip up meals for hungry, wistful young bachelors. So far, the theory’s worked—what girl could let Rock stand around starving?

Though he’s dated a dazzling variety of glamour queens, his closest approach to going steady has been with neighbor Betty—a script girl. Just that fact tells us a lot about Rock. And Betty herself says quite a bit more: “We’re comfortable together,” she explains. “He has a million friends—nice, everyday people like Barbara Rush and Jeff Hunter—who enjoy simple things like picnics at the beach or informal at-home parties. His teasing? Oh, yes, I get plenty of that. But he isn’t only the greatest little kidder in the world. Roy [Rock’s real name] is very serious about some things: his beliefs, his career, music, his friends. And he’s really rather shy; he won’t get serious unless he knows the people he’s talking to.”

So the picture is rounded out, clear, convincing, utterly consistent—the picture of a big, easygoing guy with a stock of good humor to match his size. As Betty points out, Rock’s unconquerable cheerfulness isn’t a shallow pose. The lady who’s known him longer than any other, confirms it. She’s his mother, Mrs. Joe Olson. As well as being a loving mother and son, these two are warm friends, and Mrs. Olson gets the same cheering-up routine as Rock’s other pals.

But as an infant, Rock was something of a trial to his mother For the first three months of his life, she recalls, he was busy demonstrating his excellent lung power. Then he stopped crying and settled down to the happy disposition that’s been the norm for him ever since.

“After that first three months,” Mrs. Olson says, “I can’t ever remember Roy not taking things in stride. Why, he was only six months old when I fell with him and his little leg was broken. I thought we’d have a terrible time with him. How can you explain to a child that young why he has to lie flat on his back with his leg in traction? But Roy was just an angel. He’d lie there laughing, playing and swinging that poor leg around!”

(Grown-up Rock reacted the same way to the triple fracture that threatened to take him out of “Magnificent Obsession.” As in babyhood, he refused to let his spirits be dampened. At the risk of permanent injury to his collarbone, broken in a surf-bathing accident, he went full speed ahead into the most important assignment of his career.)

It’s quiet determination, not nervous drive, that keeps Rock going. He’s never been the feverishly ambitious type. Like any healthy small boy, he devoted lots of energy to avoiding work. When he was six years old, his mother decided he should start taking piano lessons But he balked at practice sessions, and his grandmother backed him up: “If the boy doesn’t want to play the piano, he doesn’t have to!”

That was that. The recollection now makes Rock kick himself heartily. He’s made for music, and he’s concentrating ardently on his piano. “If I’d only practiced when I was six,” he sighs.

In school, too, Rock was just an average student. In fact, he admits with an easy grin, “A couple of courses were touch and go.” And, still a gangling youngster, he pulled a terrific blunder during his wartime Navy service. One day he was a proud Aviation Machinist’s Mate; next day, he’d been busted to Laundryman 3/C. Rock tells this one on himself. Seems he was working on a B-29, and he absently started two engines on one wing, instead of one on each wing, according to instructions. The slipstream made the plane swing around and smash a Piper Cub before it could be brought under control.

Running true to form, the ex-mechanic took his new job in the laundry philosophically. “It wasn’t too bad,” Rock says. “I got very good chow while I was working in the laundry. I said to the mess chief, “‘You’ve got to have all those fresh, clean uniforms every day, and I’ve got to have better chow.’ ”

Like a good many veterans, Rock came out of the service with a sincere desire for more of the education he’d once considered a bore. He wanted to enter the University of Southern California, but too many ex-Gl’s had the same idea, and USC had raised its passing standard on entrance exams to B-plus. Rock said frankly, “I never made a B-plus in my life!” Not at all discouraged by this setback, he went out and got the first job he could, which was driving a truck. Occasionally, he had to make deliveries to studio commissaries, and the movie bug bit him.

When agent Henry Willson finally managed to set up a screen test for the would-be actor, Rock made a delighted phone call to his mother. It’s easy to see where he got his capacity for taking events in stride. Mom’s comment on the big news was: “Be sure you wear your nice gray suit and a white shirt, Roy.”

He didn’t; he wore his workaday blue jeans and a faded shirt. “If they don’t like me well enough in jeans to give me a part,” he reasoned, “the gray suit won’t make any difference.” They liked him, and he was given a minute part in “Fighter Squadron.” Then came the famous name-choosing session that turned Roy Fitzgerald into Roc (eventually Rock) Hudson. Here, it must be admitted, Rock’s good humor got a little ragged around the edges. Willson, an old name-changer from ’way back, had a long list of weird pseudonyms for his protégé to plow through. At one point, the nameless newcomer broke down and wailed, “Why don’t you call me Spear Mint?”

Well, at last he was named. But his cheerful spirits were put to a further test. He had exactly one line in “Fighter Squadron,” and it ran: “You’d better get a bigger blackboard.” Through forty-two takes, the line kept coming out of Rock’s mouth sounding something like “You’d bletter get a bligger backboard.” The forty-third, with Rock still in there slugging, was the charm.

The five years since then have seen amazing progress in the Hudson career, and here again his good humor has worked to his advantage. Any picture U-I wants him to do is fine by Rock. Unlike some young stars, he’s never gotten the delusion that he’s too big to be bothered by reporters and photographers. While he works hard at his acting, his own dramatic efforts are a mortal embarrassment to him. He says earnestly, “I don’t even make love on the screen very well. I just go in and mash the make-up.”

Sometimes, as a star’s fame spreads, his circle of friends shrinks, narrowing down to those who are on a professional and financial level with him. But as Rock’s salary has increased from $125 a week to $2,000,. the number of his pals has expanded even faster. He’s enjoying his good fortune. Eating has always been a favorite occupation of his, and he can eat very well these days. He’s always wanted a house in the hills above the Sunset Strip. While he’s renting his present home, that’s where it is, and he can afford to buy his own soon.

He took a kid’s delight in the smooth, cream-colored Mercury convertible that he drove home from the factory in Detroit. He arrived in the small hours of the A.M., but he couldn’t wait to show off his acquisition. He drove all over town, waking people up and chortling with pride. And he actually met a warm welcome. For Rock’s a good man to be around—even at three in the morning.