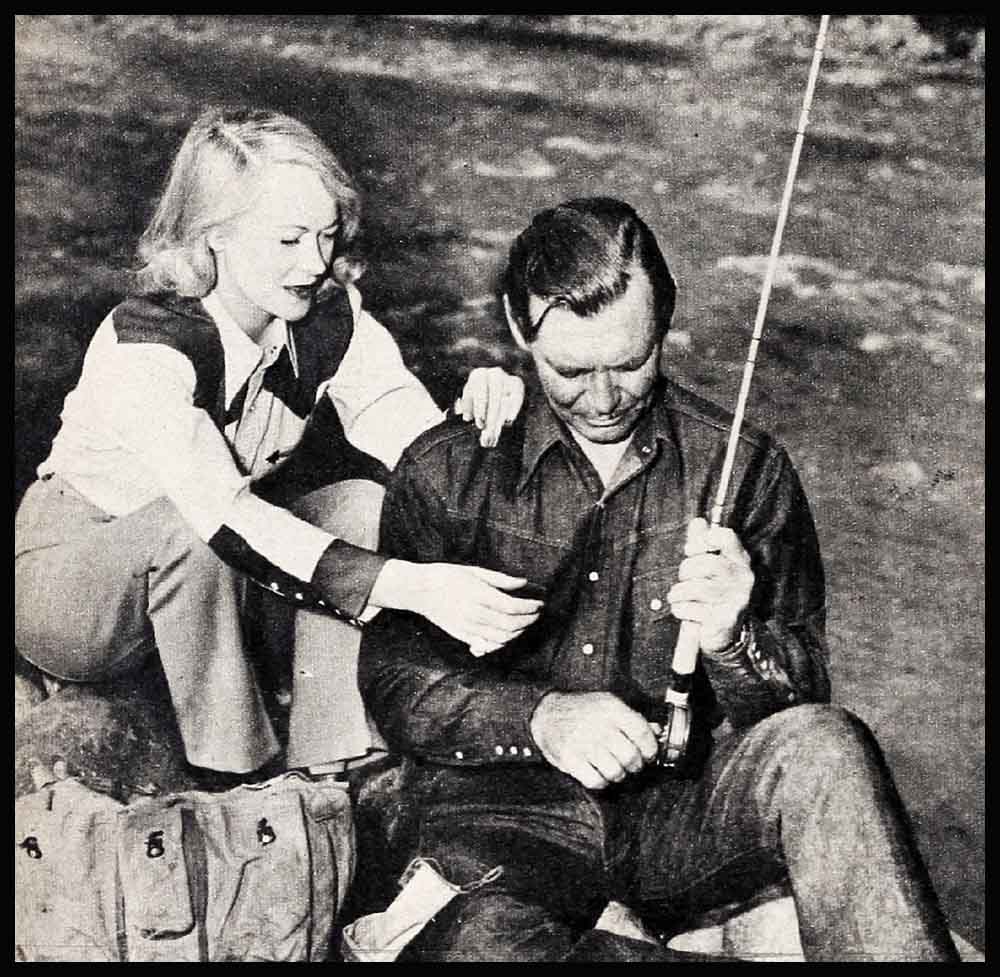 One thing is certain—the Hollywood stars believe in marriage. It often doesn’t prove a blessed state for them apparently. But that never discourages them from trying again—and again—and again.

This story about Gary Merrill, the daring young actor on the matrimonial trapeze who made Bette Davis a wife recently for the fourth time, was told me by his friend. When Gary was asked, “How long do you expect this marriage to last?” he is supposed to have replied, “I give it five years—but what a five years!” As I say, I don’t know how true it is. But switch the story around and ask Bette the same question. I know, like most women, she’d say, “Forever.”

Take her three previous marriage tries. The first with Harmon Nelson, Bette’s childhood sweetheart, was definitely meant to last forever. It went fine until she became famous. Then Ham quietly ankled the situation because in his New England tradition, the man is supposed to be the boss. It wasn’t Bette’s fault that Ham was the type of man who couldn’t enjoy living in the house that Bette’s earnings built—literally and figuratively. Husband number two, Arthur Farnsworth, died.

You have to hand it to Bette—she’s brave. It took real courage to try again after the publicized difficulties (British understatement!) of her third mating with William Grant Sherry. To get back to that “forever” business: Bette and Gary have a chance. They’re both in the same business; Gary makes enough money so as not to be embarrassed by Bette’s riches. And the last time I saw Miss Davis, her happiness ha gone to her figger. She was almost fat. Me, I lose weight when I’m happy—gain it when I’m miserable.

Cary Grant just has to be in love with Betsy Drake, his third wife. Because he did for Betsy what he has never done for any other person—man, woman or child. He actually jeopardized his career for Betsy! I’m referring to his “Mr. and Mrs. Blandings” radio series, which he needed like a hole in the pocketbook and which he accepted ninety-nine per cent for Betsy’s sake. And when I learned that Cary had allowed Betsy to write the first script, I said, “This is it. He loves the girl. She’s the last of the lady Grants.” I didn’t hear that first radio show but I read the reviews. But what does one bad Mr. and Mrs. radio show matter when you are good and in the groove for life with your real life Mrs.?

Will Judy Garland try marriage again, and will the new groom be Sid Luft? That’s the way it looks now. But until they say “I do,” and even after, anything can happen. One big passion that Judy and Sid share are night clubs. When husband number two, Vincente Minnelli, escorted Judy to Mocambo and Ciro’s, he didn’t seem too happy. But Sid thrives on the smoke and the sophisticated conversation.

What happens when and if Judy emerges from the soupy atmosphere into the cold light of reason? Will she try it again with someone else? You bet she will. She’s too young to give up. I tried to analyze Mr. Luft’s appeal for Judy and came to this conclusion: He’s earthy and matter of fact—a complete change from musician David Rose (number one on Judy’s marriage list) and the sensitive, aesthetic Mr. Minnelli.

When I first met Stewart Granger, I asked him the usual question, “Are you going to marry Joan Simmons?” Stewart, an appealing guy with a grade A sense of humor, said, “I don’t want to rush her into a decision she might regret. I’ve been in love with her since she was seventeen. I’m thirty-seven. I’ve been married before (he has two children). I want her to take all the time she wants.” And so they were married—a week later.

I bumped into the Grangers on their honeymoon, in a Beverly Hills drugstore. Jean looked depressed. Stew told me she had a headache. Jean explained they were moving into their new and beautiful home. “We have no sheets or towels,” said Stew happily. “Or pots and pans,” said Jean woefully. Mr. Granger put his arm around Jean and kind of babied her. What does that ad say—“You can’t baby a baby too much?” Jean is twenty-two now. And very sweet. But pardon me for giving unasked-for advice—don’t baby her too much, Stew, ’cause she’s quite grown up.

No one, not even the columnists who were constantly linking Clark Gable with this girl and that grandmother, really expected him to try marriage again. I knew wife number one, Josephine Dillon, when I first came to Hollywood. It was Jo who nurtured the acting ambitions of young Clark. When talking to me about him, she was kind of detached, like an aunt discussing a favorite but far-away nephew.

I was in New York when Clark’s second wife Rhea announced the separation. So was Clark, who sprinted all over Manhattan. dodging reporters. The tragic death of wife number three, Carole Lombard. seemed to write “End” to Clark and his search for a happy marriage. For years he kept her room untouched at the small Encino ranch, although the often-printed story that her clothes were still hanging in the closet was absolutely untrue.

Funny thing, he met Sylvia—Mrs. Gable number four—ten years before he fell in love with her. She was then married to Douglas Fairbanks Senior. Clark was married to Carole. When they met again, a few months before they married, love struck like lightning, burned the no-longer-young couple to a neat frazzle. If anything ever happens to this marriage, there’ll be no fifth try for either. They’d just give up.

Shirley Temple is trying with all her might, which is considerable. to make her second marriage her last. Like most of the fans, I was startled when Little Miss Marker announced the divorce from Agar, even though circumstances made it inevitable. Shirley is taking no chances of a second flop. What causes most marriages to fail in Hollywood? Fifty times out of a hundred—career trouble. The wife is working, and when the husband wants to play of an evening, she wants to go to bed for that 5 a.m. studio call. So, Shirley simply retired. Another reason for marital smash-ups in movieland—the working wife is wealthier and the husband secretly resents being a guest in her home. So, Shirley has put the house she shared with John Agar on the market. ‘I’m happy just being a wife,” she told me recently.

A gossip item in a trade paper last week stated that Lana Turner and Bob Topping staged a verbal fight “last night at Mocambo.” I remember their caviar and champagne wedding. Even the glazed hams were decorated with “I Love You’s.”

I thought then that Bob had won Lana on the rebound from Tyrone Power. She adored Ty, helped decorate his house. was with him on his studio set constantly. But she was just as much in love with Turhan Bey, was eager to try marriage with him.

And I remember Lana was in love with first husband Artie Shaw—although the courtship was so quick—“just a dinner and will you marry me” kind of thing. She was supposed to be engaged to Greg Bautzer at that time too. Lana was also in love with husband number two—Stephen Crane. And I’m sure she’s in love with Topping. But above all, I’m sure Lana is in love with love. And she’ll be in there pitching until judgment day.

Three times is lucky for Greer Garson. Never thought I’d see the day when Greer would address a group of live-stock dealers and talk intelligently to them about bulls and bacon on the hoof. But that’s what she does down in Texas and New Mexico. Greer kept her first marriage a big secret when she came to Hollywood. So did Janet Leigh, by the way. It was only recently that we learned of the sailor Janet married before Stanley Reams.

Esther Williams’s first husband was a dentist. Jane Wyman said “I do” to a furrier before repeating the signals with Ronald Reagan that one didn’t take because Jane said Ronnie preferred politics to pow-wows in the parlor. Now I hear Jane is in the mood to try again. Esther seems to have found a snug marriage harbor with Ben Gage—after some sligh hurricanes at the beginning, and this is one marriage dreamboat that I doubt will be putting out to sea again.

Elizabeth Taylor isn’t a bit like Joan Crawford but she seems headed for the same marital pattern. First marriage for Joan was to the then social cub, Douglas Fairbanks Junior. He was the crown prince. Papa and step-mama Mary Pickford were the undisputed king and queen of Hollywood society. Miss Taylor’s number one mate, Nicky Hilton, with his millionaire hotel tycoon father, was the non-acting Fairbanks of 1950. Joan’s second marriage try was intellectual Franchot Tone. Elizabeth is now spending much time with intellectual Stanley Donen, who is teaching her about politics, painting and poetry. Next attempt for Joan was Philip Terry, whom she bossed. The time will come when Liz will want to boss her men.

Ava Gardner is Hollywood’s biggest love puzzle. From Rooney to Shaw to Sinatra. With Howard Duff in between. How diversified can you get? Sinatra would give a lot of the money he doesn’t have to be able to marry Ava. He’s proud of her. Like that time recently when he flew back to see Ava in Los Angeles. He wanted to walk her past the assembled photographers to show her off. The plan was aborted by M-G-M who persuaded the couple to creep out by the back airport exit. Ava wants a home, a husband and children. She’ll keep trying till she gets ’em.

Paul Douglas has found “paradise enow” with blonde Jan Sterling. It took five marriage tries. “I’m afraid to tell people how happy we are,” Jan told me the other evening at a party. “It might jinx us.”

Bogart is a four-time winner with Bacall. If Baby can take it—and she loves it—Bogey has said his last “I do.” And three-times-wed Dick Powell has a life option on one-time winner June Allyson.

But not all movie marriages fail the first time out. We have quite a few couples who are quite content with the first girl or boy they promised to love, honor and obey until death do them part. Not only old-timers like the Jean Hersholts and the George Murphys, but young hopefuls like Anne Baxter and John Hodiak—and isn’t it wonderful about their baby? And Deborah Kerr and Tony Bartley. And how about the Robert Youngs? Bob and Betty, married eighteen years, are the most normally married pair in town.

Bob Hope and Dolores will never try the marriage march again. And I doubt whether Lohengrin will be repeated for the Bing Crosbys, in spite of rocky weather. The Robert Mitchums have apparently settled down nicely after an almost divorce. They’re a pretty snug family with their new home and swimming pool. Which Bob says he’ll be paying off for the next hundreds of years. So he can’t afford to want another wife, even if he wanted to.

I’m worried about Dan Dailey. He needs Liz and he wants her back. Losing her put him in the Menninger Clinic. I believe he went there in the hope of one day winning her back. Good luck, Danny.

And good luck to all the searching souls who try and try again to find and hold the ideal other half.