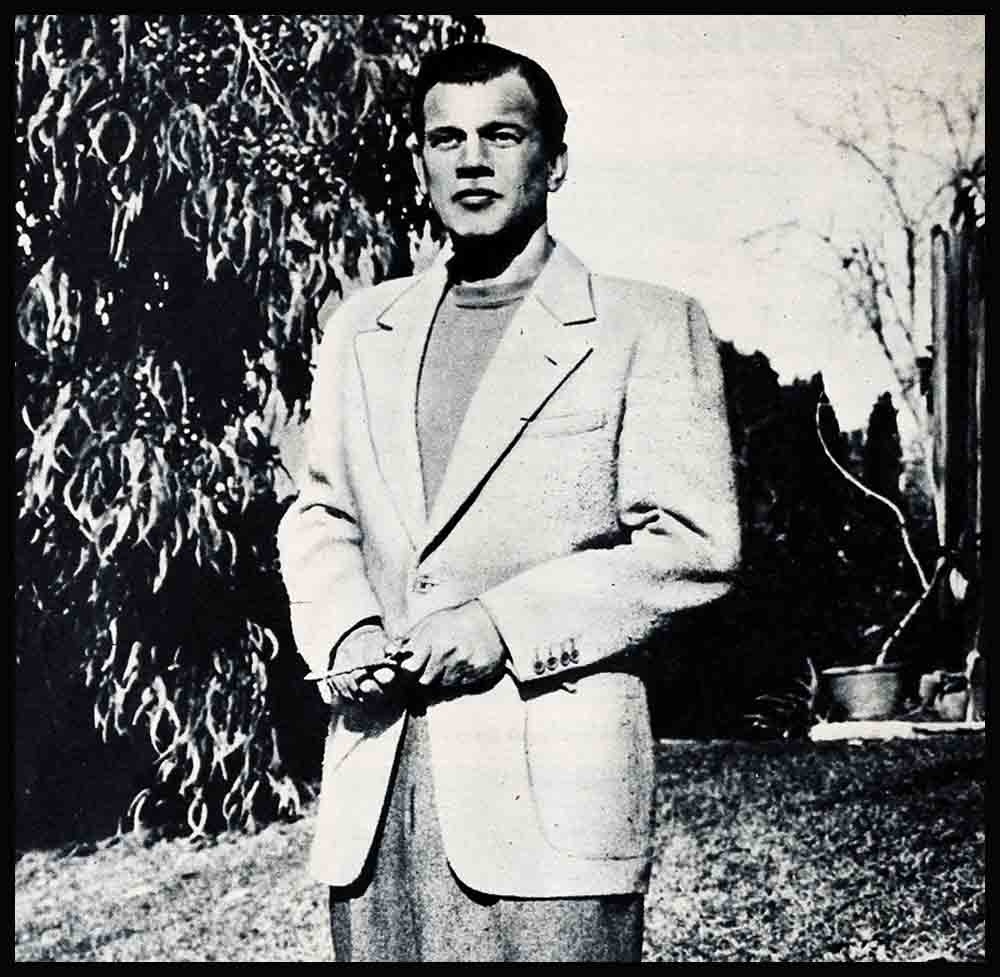 He has a sartorial weakness for checked vests and yellow gloves. His favorite classical joke ends, “that’s telling ’em, lady, ain’t it?”

He has a black sheep uncle he’d rather not discuss.

He has a passion for six-day bicycle races and every Christmas, regardless of how ‘much money he has, he spends it all on his wife.

His name is Joseph Chesire Cotten. He is scared to death of horses and admits that his knowledge of languages is limited to English and Southern Accent.

He hates anchovies and marinated herring. He gets extremely annoyed at personal questions in an interview and avers that golf is the dullest game in the world.

He is crazy about Lynn Haven oysters from Chesapeake Bay. His attitude is completely realistic and he most enjoys walking on Fourteenth Street, New York, from Fifth Avenue to the East River. He hates cats.

He is inordinately proud of his ability to make chocolate fudge.

He is always punctual and for ten years has followed the adventures of “Terry And The Pirates.”

He was born in Petersburg, Virginia, and dislikes hunting because he cannot abide shooting animals.

He believes that the chief characteristic which has made the American such a successful soldier in such a short time is that he has to win every game and he never admits when he’s licked.

Joe has more superstitions than a dog has fleas, but he doesn’t mind walking under ladders.

He is six feet two inches tall and prefers listening to experts on the subject rather than entering into political or social discussions. His parents call him Joe Jr. and he has been in the Metropolitan Museum well over a hundred times.

He has a horrible memory for names and faces and invariably calls people by wrong names.

He is very fond of loud neckties and has attended symphonic concerts in nearly every hail in the country. His wife Lenore was at one time an associate editor of Harper’s Bazaar. His eyes are green.

He never sings in the bathroom, never aspires to climb a mountain and gets terribly conscience-stricken when he doesn’t answer letters promptly.

He wears a pocket-watch and has never worn a derby.

He chews gum with a vengeance to keep from getting nervous. He is very fond of what he calls rat cheese, enjoys swimming exhibitions and confesses to being an easy “touch.” He can’t stand Hawaiian music.

He prefers urban to suburban life and at the age of nineteen he failed in his attempt to become the potato-salad king of Florida. He claims the big monopolies ruined him.

He gets very self-conscious after eating garlic, which he loves, and if he ever failed as an actor he would like to become a producer. His wife Lenore, an accomplished pianist, plays the grand piano which is the only musical instrument in the Cotten maison.

He can never remember the license number of his car. His favorite way of loafing is to play three sets of tennis and then lie in the sun. He likes sardines, cannot read music and is meticulous with his personal belongings.

He is allergic to conversation before breakfast.

Joseph Cotten’s hair is so dry J and kinky that he has to use an oil to comb it. He prefers gin to vodka, dislikes hillbilly music and thinks sincerity an uncommon virtue.

He first fell in love—“and the only time”—when he met his wife in Florida in 1929. He is right-handed.

He misses vaudeville, is currently reading a modernized version of the Bible and gets fidgety at long telephone conversations.

He has an aversion to birds in cages.

He has never had a lighter that worked, has great difficulty spelling words with double consonants and believes he can wear an opera hat with the proper dash. He likes watching polo games.

He favors cashmere fabrics and laughs heartily, loud and long. He weighs 185 pounds.

He hates reading in bed.

He has never worn a mohair suit, considers himself a fatalist and is capable of fixing any minor trouble in his car. He never takes aspirin.

He played the “bones” expertly when he was a kid and had he lived 300 years ago he would have been a country squire. He is inordinately fond of candy.

He never rides a hunch, deliberates all problems carefully and recently signed a long-term contract with David O. Selznick of “Gone With The Wind” fame. He once attended a dramatic academy at Washington, D. C., where he managed his tuition by playing professional football.

He likes avocadoes and his father is superintendent of mails at Petersburg, Va.

He plans to visit China when the war ends.

He disclaims any ability to cook, never forgets articles and wishes there were more public rest rooms and public telephones in our cities. He likes all kinds of dogs.

He does not believe in astrology or fortunetelling. He likes the pungent odors of a delicatessen and the only traffic ticket he ever got was for speeding—a charge he violently claims “was framed!”

He does not take advice easily.

He likes his showers very hot, then suddenly cold. His only taste in jewelry is in cuff-links, of which he has a huge and curious collection.

He loves champagne and full-bodied red wines, is entirely free of “moods” and entertains a secret desire to be a tap dancer.

He sang in a choir until he was twelve, when his voice changed. He is adept with tools and loves to make things. He has never won a prize and doesn’t like night clubs.

He dreads being introduced at dinners, fearful of always saying the wrong thing. He usually smokes cigarettes, occasionally a cigar or a pipe. He seldom wears a hat.

He has never been able to stand up on ice skates. He first became associated with Orson Welles in the WPA Federal Theatre. He is easy-tempered, drinks much water and plays no musical Instruments. He has never worn glasses.

He revolts at sparkling burgundy.

He loves trotting races, scrambled eggs in hash-house style and gets stage fright e very night of a performance. He never reads poetry and in 1939 played the leading male role with Katharine Hepburn in the Theatre Guild’s “The Philadelphia Story.”

He thinks snobbery is an inherent quality in human nature. He likes eating in quiet places without music and dancing.

He never wears an undershirt.

He seldom catches cold, never gets a headache and misses most in Hollywood the Queensborough Bridge—“it seems like Long Island out here but you never get to the city.”

He admits that a child could beat him at checkers or chess and if he had life to live over again there is nothing he would have done differently. He likes heavy, exotic perfume on women.

He does not believe in matrimonial vacations. He doesn’t like picnicking and loathes living in apartments or hotels.

Joseph Cotten likes shopping so much that he buys nearly all of his wife’s things, including lingerie. He belongs to no clubs.

He is an avid reader of PM and likes earrings on his wife. He is a colorful conversationalist and dances an excellent waltz and fox trot.

He likes Panamas and straw hats.

His favorite singer is one Burl Ives, a ballet and folk singer known as the Wayfaring Stranger. His last streetcar ride was in a cable car in San Francisco.

He likes his wife to wear geraniums in her hair. He doesn’t like Chinese restaurants. He sees very few motion pictures and can tell you almost where anything is in the Metropolitan Museum.

He has no delusions about having any talents other than his chosen one, acting.

He possesses a ten-year-old worn-out black dressing gown which he hasn’t the heart to throw away. He loves Western films, shaves with a safety razor and played in stock for more than a year.

His spelling is affected by his Southern accent. He likes air travel and finishes everything he undertakes. He once sold paint in Miami, Florida.

He cannot rumba or tango.

Joseph Cotten, when a boy, was very popular with the girls.

He is very fond of playing catch, likes I swing and thinks it is not possible for any I individual to set a pattern for his life and follow it through.

His favorite fairy tale is “The Little Prince” by St. Exupery.

He has read Mary Baker Eddy and hopes that someday, someone will write “Porgy And Bess” into a ballet. He has a weakness for chocolate malted milks, worries I about his everyday job and has never been to Palm Springs or any desert resort.

He sleeps soundly and likes his coffee black. He once worked as a life guard, boasts that he can do a nifty jackknife dive and always regrets a heavy luncheon.

He likes his beer only on draught. He seldom dreams, but when he does, he has terrifying nightmares. His favorite breakfast is of southern-style grits and with salt and butter, “when you can get it.”

He is superstitious about hats on beds and whistling in the dressing room.

He and director Alfred Hitchcock call each other every Sunday to discuss the adventures of Smokey Stover, the comic cartoon hero. He likes caviar.

He likes wearing sandals. His father, brother and himself all have permanent football injuries. His favorite modern painter is Renoir.

He likes old houses in the South, Gothic churches, club sandwiches and has no plans for the future, living from day to day.

He is so farsighted that when he is on the air he places his script on a music stand and stands five or six feet from it. He and his wife frequently ride bicycles to shop in Westwood, a ten-mile round trip.

He never gets seasick, likes blues and grays in shirts and thinks money extremely important to happiness.

He cannot carry a tune or read a score, but he can tell immediately when a conductor makes a mistake. He doesn’t go in for gambling much, but when he does, he’s never lucky.

He plays an excellent game of badminton and tennis. His favorite American author is Ring Lardner, he doesn’t like the opera and hates snow and cold weather. He uses a typewriter like a newspaperman.

He hated the subjects of languages at school because his southern accent “always got in the way.” He once invented a method of pasting labels on gallon cans of paint, which to this day still remains in use, “but no royalties.”

He is blond and when playing baseball at school he could never hit a single, but frequently hit a home run.

Joe likes the memory of drinking beer at a place in Milwaukee “that looks like a set for ‘The Student Prince.’ ”

He never has a political argument with his wife and every Christmas Eve the sheer excitement of the occasion makes him so ill that he invariably leaves his guests and goes to bed.