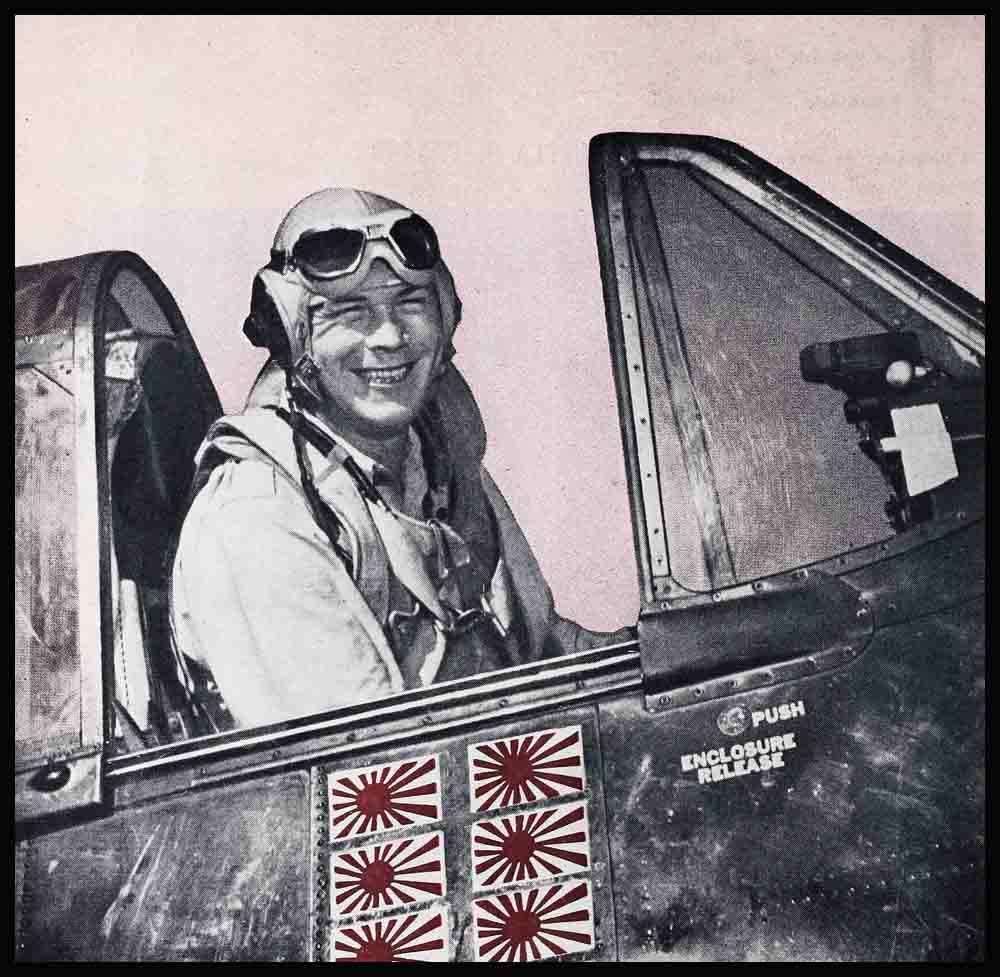 I started praying the day I married. Wayne was in uniform. I didn’t pray his orders for active service would not come. I prayed only that he would be safe, wherever he went, whatever he did.

When Wayne left for combat duty I prayed harder than ever; silent prayers while hanging out the washing or doing the marketing. And I knew that my prayers flying upwards mingled wit,h the prayers women everywhere were phrasing in different tongues and dialects.

I prayed hardest when our daughter Pam was born. I shut my eyes tight at night and tried to picture what Wayne was doing. My favorite picture imagined him pacing the deck and wondering whether our baby would be a boy or a girl.

I discovered later, much later, when Wayne’s letter rejoicing in Pam’s arrival reached me, that this hadn’t been an easy time for him either. Far from it. He wrote:

“Well, I feel a lot better today. Yesterday it was kind of rugged for me but I’ll have to start right in from the beginning. . . .

“As you know, we left the little Island No. 2 on the morning of the sixth real early and the night before I had written you a letter saying I hadn’t had any word of the baby yet. Well, I surely did feel bad, ’cause I just knew that it had been born, so I figured that I wouldn’t hear for three or four weeks more. Well, anyway, after we were quite a way out to sea they brought out the mail that had been brought aboard the night before, and I hurriedly read through your letters, both postmarked the 30th. It was the same old story. But one from my mother P.M.’d the 31st gave me the smooth news of my daughter. Needless to say, I was elevated from a very morose young man to the happiest guy in the fleet and, really, secretly, I was just a little bit happier that it was a girl. God knows what I’m gonna do with a daughter messing up the house, but I’m tickled to death, sweetheart, and I want you to know it.

“Well, we waited until about 5 p.m. Then Dave and Bob McReynolds and I sat down in Dave’s room and we toasted my daughter into this world.

“So you can tell the young lady that her daddy and great uncle Dave did all right by her.

No literary masterpiece, his letter—but I knew every word came from his heart. That was what counted.

With Pam’s arrival life became filled with the complications that everyone knows these days. I moved into the North Hollywood house that Wayne had built when he was making pictures at Warner Brothers. It’s quite far out in the country. Unable to get a telephone and alone much of the time, since gas rationing made callers few and far between, I felt marooned. However, taking care of Pam and the house kept me very busy.

When Pam was in bed in the evening I would play solitaire (I think I know every variety of that game ever invented), listen to the radio and think about Wayne.

I was more fortunate than many wives because I had news of Wayne through newspapers and radio. He was with Fighting Squadron Fifteen of which my uncle, David McCampbell, is the Commander. So whenever I read or heard about David I knew that my boy friend was safe and sound. Sometimes, of course, the news was disturbing—news such as their destruction of nine enemy planes in an hour and thirty minutes. I knew they had gotten away safely that time—but I couldn’t help wondering about the next time.

One evening as I sat playing solitaire, listening to the radio and thinking about Wayne, I was startled to hear his voice. He was broadcasting from Honolulu, telling about the Jap planes he had shot down. I was filled with indescribable joy because I knew even in that moment he was safe, Letters assured me only that he had been safe two or three weeks earlier, depending upon their date-line.

You may not believe in hunches. I never did before. But I do now. For after hearing Wayne’s broadcast and reading over the letter he had written about Pam, I had a strong feeling that he was coming home. I didn’t talk about it because I was sure people would smile to themselves and feel I was indulging in wishful thinking. But I went ahead with plans. I cut corners on my budget so that when Wayne arrived I could have a maid and be free to spend all my time with him. I caught up with all the washing and ironing, shined up the house and even tried to improve the garden. And while I was doing this I planned how I would cook the things he liked to eat, how we’d play our favorite game—gin rummy, how we’d talk and talk until we both knew everything the other had done during our long separation. I bought a new dress, too, kept after my hands, brushed and brushed my hair, cold-creamed my face and neck faithfully—so I’d look my very best; so his first sight of me after all our months apart wouldn’t let him down.

Which goes to prove the best-laid plans do go astray. . .

Five o’clock one morning the bell awakened me from a sound sleep. I flew to the door—and found Wayne standing there! The lack of a telephone had made it impossible for him to let me know that he had landed.

We were so happy to see each other that I forgot how unglamorous I was with cold cream all over my face. And he didn’t seem to notice. Soon enough we were hurrying to the nursery. Wayne couldn’t wait, naturally, to meet his six-months-old daughter.

The minute that little tike, Pam, opened her eyes she began to flirt with her father. And he was so susceptible that I knew I had a serious rival in the family.

Thinking about Wayne’s homecoming I had forgotten that besides his outstanding war record, he was a movie star. These facts did not contribute to our privacy. Even his first day home we found ourselves in a merry whirl. Navy public relations wanted Wayne for press conferences and radio programs. His agent had matters which required his attention. Jack Warner gave a big luncheon for him. There were endless cocktail and dinner parties. We had so little time together I began to feel sorry for myself—until a package arrived in the mail. It was a present for Pam from the wife of a boy in Wayne’s squadron. From the wife of a boy who had been killed. I took a deep breath and realized how lucky I was to have a husband—even on a merry-go-round.

Fortunately, a little lull in activities came when Bubbles Schinasi, Wayne’s former wife, arrived from the East with his adorable five-year-old son. There were some raised eyebrows when Bubbles and I went about together. However, we have long been friends and when Pam was born Bubbles sent me flowers with a card saying, “From my son to your daughter.” Above all, Bubbles and I want our children brought up in harmony and peace. It is, after all, to wipe out jealousy and bring about peace and unity among all people that we are fighting. And all of this cannot come to pass unless we strive towards it in our personal lives.

One night, following a game of gin rummy, I played the record I had been fortunate enough to get of Wayne’s broadcast from Honolulu. When it ended he grinned and said, mockingly, “Isn’t that guy wonderful?”

But then, memories stirred perhaps, he began talking about the impressions he had gained during the fifty-seven combats in which he and his crew had shot down seven enemy aircraft, sunk two small cargo ships, damaged three, a heavy cruiser and a mine-layer. In which, with other pilots, he had sunk an enemy escort vessel and an anti-aircraft barge gunboat.

“You can’t imagine what a naval battle is like, honey,‘without seeing one,” he said. “The second battle of the Philippine Seas reminded me of a gigantic Fourth of July display.”

“Well, things like pinwheels were bursting. There were streamers in the air and phosphorus and blazing. There were all sorts of colors. I saw one carrier sink, with two cruisers and a destroyer.”

As Wayne talked he walked nervously about the room, pounding his fist against the palm of his hand. He was different from the nice boy with lots of charm who made “Kid Galahad,” “Flight Angels,” “Gambling On The High Seas” and “The Smiling Ghost.” He still has charm but it’s more mellow now because of his deeper understanding. After the war, when he returns to the screen, I know he will give greater performances.

Wayne went on: “The Jap pilot is pretty stupid, I think.”

“You mean the way they believe their own propaganda?” I asked.

“That too. But what I had in mind was the way they just don’t stick together. When we jump them they generally split up—never trying to help one another as our pilots do. And, you know, a single plane is duck soup for pilots who combine their fire power and maneuver as a team.”

It might be duck soup to Wayne. To me it was terrifying. And the knowledge that it had happened time and time again—at Marcus, Wake, Saipan, Pagan, Roto, the Bonins, Guam, Tinian, Palau, Mindanao, Visayas, Luzon, and Formosa made it more terrifying.

I had won our gin rummy game that night and, after our talk, insisting I deserved a prize, Wayne went to our bedroom and came back with his D.F.C. and gave it to me. Looking at it shining in my hand I found the courage to ask something I always had wondered about.

“Were you ever afraid?” I asked him.

“I sure was, honey,” he grinned. “Every time they showed a picture aboard the Essex, I was scared to death it would be one of mine. That’s something I never could have lived down. . . .”

Wayne’s next assignment is as an instructor in Florida. How long this job will last we do not know. But so long as it lasts I know I will go around, as I do now, saying to myself, almost incredulously, over and over, “My husband is home!” And praying still—for the day when every wife in the land can say the same.