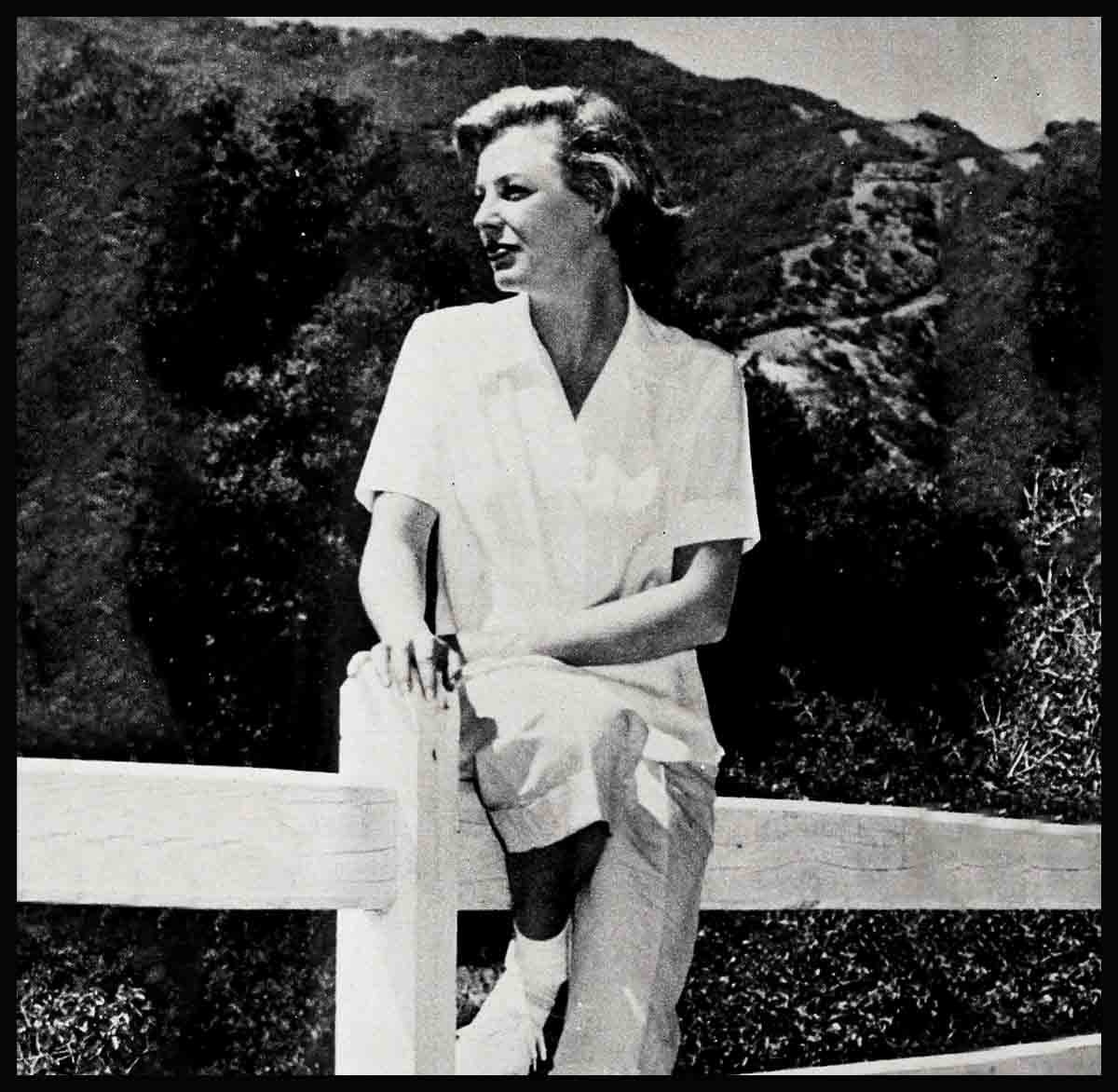 She was about as big as a minute, sitting in the tall chair with her name on the back, reading a story someone had written about her. “Hey,” she said, “We’ll have to correct that. He says I’m five feet, one. I’m five feet, one and three quarter inches tall—and very sensitive about my height.”

None of the busy people around her looked intimidated. No one seemed to mind, either, that it was cold out there on the back lot at U-I and that sullen gray clouds hung low overhead. This being the movie-making business, the cast and crew of “The Glenn Miller Story” were happy as clams about the whole thing. They had been waiting for just such a day to shoot some foul-weather scenes for the picture.

“Okay,” said the assistant director, “Let’s go.” Magically, rain began beating furiously down on the top of an ancient touring car, mired to its axles in man-made mud. As the cloudburst continued, rivulets formed and slowly ran downhill toward the chair in which the blonde atom sat. A man—it might have been a grip, the producer, whoever won the race—waded over to her, held out his arms, and asked, “May I?”

He lifted her ninety-four pounds high into the air, clowning it up, then cradled her in his arms like an infant. “Mustn’t get her little feet wet,” he teased.

Quickly he put her down on a dry island of earth. “Why, Junie, what’s the matter?” His concern was real.

Miss June Allyson, star, rubbed the offended area of her anatomy. “What’s the matter?” she echoed in mock indignation. “I sat on that pencil in your shirt pocket—that’s what!”

And, laughing, she ran up the hill to take her place for the coming scene.

Obviously, she was happy, and just as obviously the U-I gang was happy to have June around. A member of the publicity department, who has been exposed to her share of temperament, said fondly, “How can you help liking a girl who knocks herself out to do everything you ask? She makes the job seem easy.”

You never heard her called “Miss Allyson,” except in jest—and you never saw her alone for one minute. Co-star Jimmy Stewart slogged through the mud to stand beside her and talk until he was urged to get into some dry clothes. A grip with whom she was having a running gag got his licks in. Director Anthony Mann came up and kissed the top of her head.

This is a far cry from the taut, fraught girl about whom retirement rumors circulated only a few months ago. Except that they weren’t rumors. “I honestly thought I was tired enough to quit and be plain Mrs. Richard Powell,” she says. “I wanted to stay home and have two more babies instead of making pictures, but Richard said, ‘Now, simmer down.’ ”

When the simmering-down period was passed, it turned out that June wasn’t tired of making pictures at all. She had simply reached a point of complete dissatisfaction with the roles she was playing. She felt that these should be her best years and that the most was not being made of them. June is no phenomenon, no accidental star. True enough, her talents are varied and her physical assets many—the elfin charm, the petite air, the warm, husky voice—but it took more than all this for her to achieve stardom. A knowledge of herself and her limitations, liberal application of intelligence and courage.

She proved that she knew herself best when she was given the script of “Two Girls and a Sailor” to read. She saw immediately that it was wrong. She was to play a beautiful, giddy girl while gorgeous Gloria DeHaven, for whom all great things were being predicted, was to be her plain, quiet sister. Now, it must be admitted that June had had a secret hankering to be the beautiful siren type up to that point, but she was realistic enough to see that no movie audience was going to be convinced that she was glamorous and Gloria DeHaven was not.

Deeply troubled, she took her problem to her soundest advisor, one Richard Powell. “Hmmm,” he asked sensibly, “which is the better part?”

“But Richard, what am I going to do? How can I make them see it?”

“I think you’ll find a way,” he answered.

So she did it; she took up the scissors and whacked off her shoulder-length golden tresses. With her crowning glory gone, “I was the plainest girl that ever happened,” June recalls with relish. Then she presented herself at the studio where, before M-G-M executives could pick themselves up off the floor, she asked to be tested for the role for which she was now unquestionably suited.

June won—and the picture made her a star. More often, and especially in recent years, she has lost her fight for the right type of role. “For one thing, I could never say no,” she admits. “I still can’t. Besides, they could always remind me that I was the girl who wanted to turn down ‘The Stratton Story.’ ” She even offered to go on suspension several times, but she ended up playing parts for which she felt miser- ably unsuited.

It was for this reason and only this one that June declined to renew her contract with M-G-M. She neither asked for a raise nor was asked to take a salary cut, as has been rumored; money was not an issue. She knows well enough what an important factor the studio has been in her rise to the top, and warm words of gratitude are quick to come to her lips.

Purely and simply, June left Metro because she wanted to choose her own story material, which she could do only if she became a free-lance actress. When her husband, upon whose judgment she relies, approved of the move, June’s mind was made up. And for once she stuck to her guns. But when her release was worked out, she cried for two days. It was not, after all, so easy to leave after ten years.

The new arrangement has turned out beautifully. It has been said that a childless couple has only to adopt a baby to be blessed with one of their own. The case of June and her urge to have the “right” roles is somehow similar. She had barely attained her new free status, had just signed with U-I to do “The Glenn Miller Story” when Metro offered her a real acting plum in its star-studded “Executive Suite.” June could only be more delighted if the director’s name were Dick Powell.

This is one of the most important projects in June’s future: to work professionally with her husband, whose first directorial venture, “Split Second,” was such a smash success. There are plans afoot; Mr. Powell wants very much to do a picture based on the fabulous Gibson Girl of the early 1900’s, and Mrs. Powell entertains the fond hope that she’ll be invited to play the title role. “I have a feeling, though,” she says, “that he fancies Jane Russell for the part.” The thought of competing with the sultry and statuesque Jane appeals to her sense of the ridiculous. “It will certainly be one kind of picture or the other, won’t it?”

June is busier now, working harder than she was under contract, and she thrives on it—except that she misses being with the children. Pamela and young Richard do have six-thirty breakfast with their industrious parents, but it’s still a very long day until June sees her small fry again at seven or so in the evening.

By then, of course, they’ve already had their dinner, and June can only visit with them briefly as she tucks them in for the night. Not with a lullabye, however. “My daughter broke me of that,” she says.

It seems that young Pamela is a purist about her music. She never went so far as to say she didn’t like it when the unique Allyson voice was raised in song. Even more devastating, she merely asked, “Mother, what are you doing?” Mother got the idea.

The Powells have a deep, abiding love for home and family, and the Mandeville Canyon farm is well-stocked with young growing creatures, to which Dick wants to add more animals and June, more children. “I can remember when I felt like a wallflower if I didn’t go to a night club a couple of times a week,” she says. “Now it just isn’t terribly important. The last time we went, whenever that was, it was just smoky and dark and noisy. I’d much rather have dinner at home, alone or with friends, and run off a movie later.”

Now, more than ever, she encourages the quiet routine that they both prefer. Aside from the fact that they are too tired for giddy activities after a day at their respective studios, June has reason to see that her husband gets the rest he needs. After a “virus” was properly identified as a ruptured appendix almost too late to save his life, it was predicted that Dick would be sidelined for at least six months, possibly a year. Then the people who make predictions did a quick double-take because, the moment he could get around again, Dick was back in harness at the head of an independent production unit at RKO. His wife, who was not surprised, simply went on praying and taking care of him when she could catch the guy.

Her Richard is, of course, a man of enormous energy and intelligence. It is safe to say that if he hadn’t entered the world of entertainment, he would have been equally successful in any other field—he has that much imagination, that kind of drive.

“It’s fantastic,” June said recently. “Richard will say, ‘In five years I want things to be like this,’ and then he starts working for it. You don’t have to wonder about it or worry. You can be as sure that it will happen as you can of the sun rising tomorrow.”

Happily Dick is a strong man as well as an intelligent and resourceful one; though the horror of that near-fatal illness is still fresh in his wife’s mind, the spring has long since been back in his walk, and zest for life strong in his heart.

He wears the pants in his family, no question about that, even though Mrs. Powell does cut a pretty cute figure in her own tailored slacks. He knows more about more things than anyone else in June’s experience, so she’s happy to let him take over. He’s the financial wizard with a sound head for figures, the fashion expert who selects her clothes with a lively and knowing eye. He listens to her problems and points her in the direction of the right solution. He’s a perfect father, a wonderful husband, a delightful companion.

In fact, you could write it in chalk on the fence and put a big heart around it that “Junie loves Richard.” Make that two hearts—and vice versa. Hard as this is to believe in Hollywood, even that wouldn’t put the double-whammy on the Powells. Every morning is a beautiful morning, and everything’s going their way.