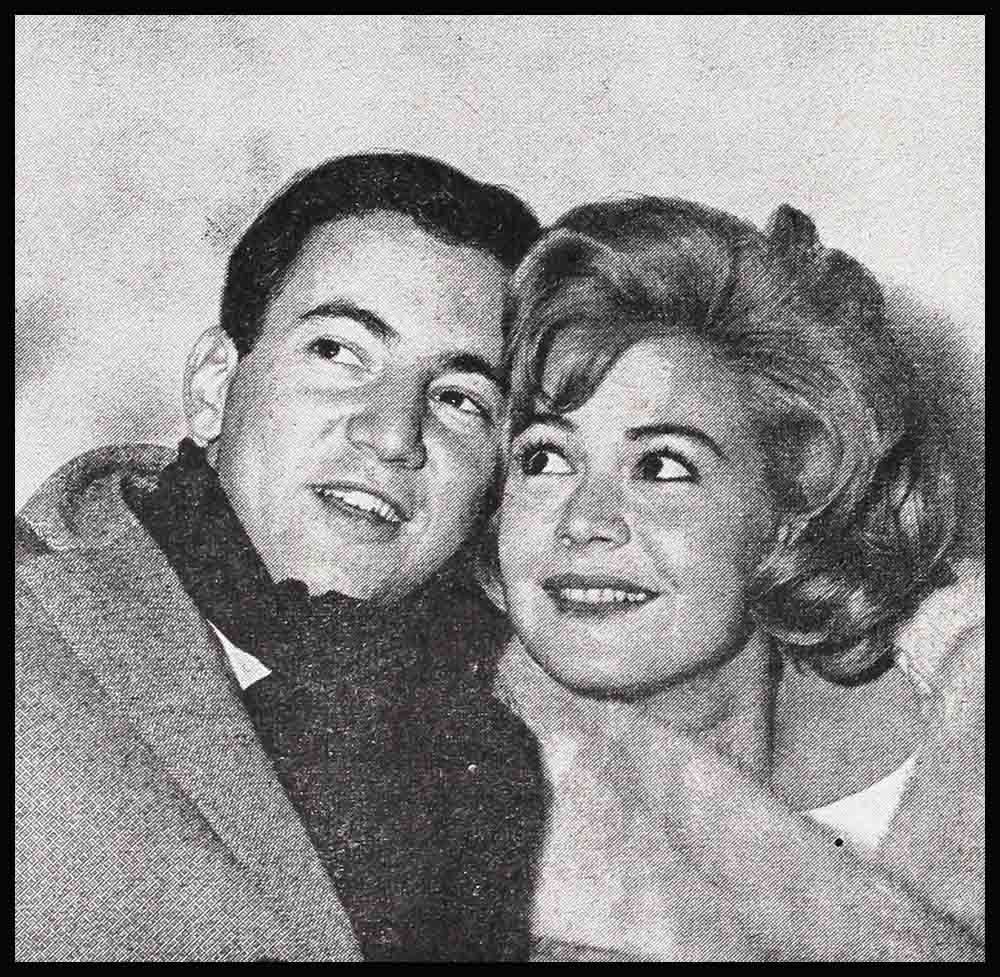 Bobby hadn’t said much as he threaded the car ever so carefully through the heavy evening traffic. His face was sober and serious, and there was a solemnity about him that Sandra Dee had never seen before. Not even at their marriage.

They were nearing the hospital now. Only a few more minutes to go. And then. . . .

“You all right. honey?” Bobby asked. His tone suggested he had not the slightest idea of what the answer would be—what to expect.

“But,” Bobby said uncertainly, “you haven’t any—I mean—isn’t there some pain?”

Sandra closed her eyes and leaned back in the seat. She didn’t say anything.

Her normally slim, girlish figure was full and round with the expectancy of the new life that love—the love she and Bobby had shared—was creating. Soon now. This night.

“Sandra?” Bobby said softly. His eyes were straight ahead—on the traffic. “Sandra,” he asked again. “Does it—isn’t there—any pain at all?” The last two words spoken as though he could not believe them. Or any of this.

“Pain?” asked Sandra, with incredible casualness. “Of course there are pains. All kinds—Big pains, little pains. . . .”

But she was calm and even, revealing no sign of the prenatal spasms that were running through her body.

With deliberation she sat up. “But you don’t look—I mean act—like you’re having any pains,” said Bobby. “Other women, when I was a kid—the women in the block—they had terrible pains at a time like this. You could hear them.”

Sandra smiled at the side of her husband’s face. His eyes still refused to stray from their meticulous scrutiny of the Street ahead. He had to be careful.

Sandra looked down at herself and then back to her husband.

“I want you to remember something, darling.” she said. “Right now. What I’m going to say: I’m here with you. I love you. You love me. We are going to have a baby. We’ll have it before the sun rises. But I want you to know that at this moment I am so happy, so beautifully, wonderfully, gorgeously happy, that the pain doesn’t matter. I feel it, but it doesn’t matter.

“I guess that’s the only way I can show you how really happy I am to have your son. And it will be a son, I know it. Tonight there’s just you and me, Bobby—but by morning we’ll be a family.”

She stared at his face for a moment with all the ecstasy and loneliness and sadness and security and joy that a woman could know.

“I love you, Bobby,” she said quietly and she put her head against his arm.

At 2:19 a.m. the following morning, December 16, 1961, Sandra gave birth, quite naturally, to a son who was named Dodd Mitchell Darin. The infant was 191/2 inches long and weighed six and a half pounds.

A few hours after delivery, to the surprise and pleasure of her doctors. Sandra sat up in bed, bright, wide-eyed, excited beyond measure and said,

The nurses smiled warmly. “We’ll bring him to you soon.”

Sandra shook her head. “No. Please. Could it be now?”

“Nurse,” said the doctor, “bring a wheel chair for Mrs. Darin.” Then to Sandra, “You may see your baby, Mrs. Darin. I mean your son.”

Minutes later, Sandra was feasting her eyes on the soft uncrinkled face of her son. She pressed her face close against the glass partition separating them.

“See,” she said delightedly, “see, he isn’t wrinkled at all and everyone said he’d be. He’s smooth as—as a baby!

“God, isn’t he simply beautiful.” She didn’t care at all that she was crying and people were looking at her.

In another part of the hospital. Bobby was sitting on a cloud telling the news to Sandra’s mother.

“Mary! Your daughter’s a mother! I’m a father! You’re a grandmother! You have a grandson! How do you like that?”

“It makes me happier than you know,” Mrs. Douvan replied. “It’s wonderful.”

“It’s wonderful for all of us,” Bobby said. “At last, at last, we’re a family. I have a family! I’m eighteen feet tall.”

Few persons—even those close to him—know what that word “family” means to Bobby Darin. Some friends think the word “family” is the most important word in his vocabulary—and life.

It is what he has wanted. worked for, prayed for—and fought for!

It is because of this burning yearning for a family that, beginning a few days after Sandra came home from the hospital, Bobby became so protective toward his wife and baby that it surprised even those who knew his demands for privacy.

Photographers, most of them on the job hoping to bring the public a quick glimpse of the Darin heir, were flatly refused permission to take pictures of the child.

Sandra, of course, attuned to a warm and fruitful relation with her public after years of experience, would be more than delighted to show pictures of her son to every person in the world.

But Bobby forbids her.

Added to his firm stand photographically, Bobby also will not discuss for the public any aspect of his new family life.

Sandra disagrees, but she obeys. “I cannot say my husband is right when he is wrong,” Sandra commented recently, “but right or wrong I cannot disobey him.”

One writer who had long been friends with the couple was amazed that Bobby had taken the attitude that “my family, my wife, my son, are so sacred to me that I cannot share any private activities with the public.”

“But you are forcing Sandra to bide her own son!” said the writer. “It’s understandable that you want to shelter the infant and protect it from danger. But people—your fans and Sandra’s—what about them?”

Darin will not listen.

He is the reason Sandra hides her baby.

“Of course,” says Sandra, “I will sound prejudiced, but I must admit that I can understand Bobby’s point of view in some ways. He feels intensely responsible for our son’s welfare. He feels that in addition to his work, his new obligations are enough to take care of.”

Sandra laughed. “He doesn’t think I’m well yet. He believes I must be treated as a helpless person for at least three months. His reasons are honest, his concern is genuine and I know everyone will understand that he is a first-time father. That’s enough to unnerve any man.”

The “hidden” baby, however, is enjoying attentions rarely given to other infants.

Bobby has bought toys by the car load. The very day Sandra learned she was pregnant, she bought an Eton suit for the son she knew she’d have. She was aware that he would not be ready to wear it for at least two or three years, but she bought it anyway, and loved it.

And Dodd Mitchell Darin snoozes in a luxurious room of his own.

He is set in a soft yellow bassinette, covered with tiers of violet ruffles. His crib, ready for when he is ready for it, is in white and hand painted in gold.

Above him is a blue and white striped awning drape that sets him off majestically. The rest of the room is appointed in beautiful white furniture. For light there are four baby lamps motifed with clowns. children and animals.

And Sandra, still near petrified with delight, insists on performing every single rite on her son that infants demand. He is fed with great excitement. His bath is a ceremony. The changing of his diapers a ritual. And he is so tenderly lulled to sleep and watched over that he is rarely given a chance to cry.

“You know,” she added, “this baby is so much fun I’m already thinking about having a daughter.

“And it will be a daughter, you know, and the pain won’t matter. Ever. Even if I have ten children.

“But Dodd, he did something special for me. Something I never dreamed would happen so soon. When I married Bobby I became a woman. When I had Dodd I became a mother. And I like being all woman at nineteen.”