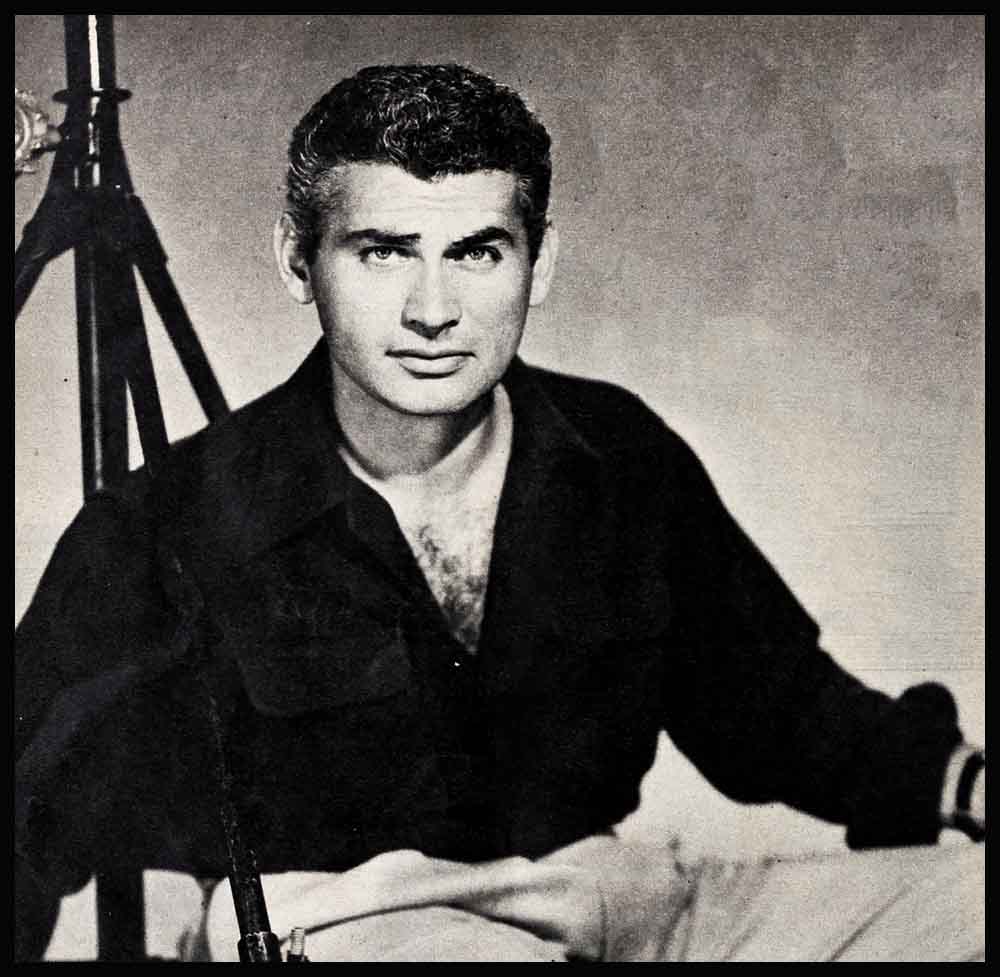 The early years of Jeff Chandler, born Ira Grossel—grandson of the owner of a little Brooklyn delicatessen store—were geared to the tempo of the tenements. He’s experienced both sides of life, the seamy and the smooth. And somewhere along the way he picked up the- human know-how that colors his personality and every role he plays.

“He’s the most aware person I’ve ever known,” says his actress wife, Marjorie Hoshelle. “Jeff sees everything. And the qualities he has as an actor are the same as those he has as a person. They carry over.”

In one brief climactic year Jeff has appeared in “Broken Arrow,” “Two Flags West,” “Deported,” “Bird of Paradise” and “Smugglers’ Island”; and he’s currently prepping for the role of a prizefighter in “The Iron Man.” And in every picture he’s had more experienced stars literally hanging on to their scalps. To say nothing of the casting director who remembers telling Jeff’s agent not so long ago, “Sorry, we can’t use him. When we need some mugs we’ll let you know.”

Jeff was heard long before he was seen, having had his own radio show, “Michael Shayne, Detective,” in addition to appearing on many others. Radio, in fact, in the person of Dick Powell, was responsible for his first break in movies. Dick worked with him on a radio program and was so impressed by his work, he got him a part in his picture, “Johnny O’clock.”

“Dick’s been keeping an eye on my career ever since,” says Jeff gratefully now. Adding, “People are always doing things for me. And I’m not that nice a guy. They’re just impressed with my size,” he turns it off, grinning.

Certainly Chandler is the biggest star in pictures today. He weighs 210 pounds and towers a good six feet four, posing quite a problem for cameramen filming his love scenes with diminutive leading ladies.

Ever since he can remember, Jeff wanted to be an actor—but there wasn’t too much time for any “extracurricular” activities during his early years. He worked in a candy store from six a.m. to ten a.m. and after school until midnight. Out of school he worked as a page at Radio City, and eventually joined a Long Island stock company. Later, with an actor friend, he formed a company of his own in Chicago.

He did a four-year stint in the Army, winding up with a nest-egg of $3,000—“Overseas there was no place to spend it—when I got wise and stopped playing poker.” He headed for Hollywood where he splurged $1,000 for clothes, and before too many months he’d spent the other $2,000. By then he was romancing an attractive, willowy actress, Marjorie Hoshelle, whom he’d met before the war, in New York. They existed on their respective unemployment checks—“And whoever turned up with a buck bought dinner.”

The Chandlers have two daughters, baby Dana and irrepressible three-year-old Jamie who whenever she’s asked, “Do you want to be an actress when you grow up?” says, emphatically, “Nope!” Jeff laughs, “When she gets older, maybe we’ll find out why.”

Jeff hopes his role in “Smugglers’ Island” will answer one personal question for him. “It’s the first time I’ve ever been me on the screen,” he says, “a guy who’s just an ordinary American Joe. When this picture’s released we can tell whether audiences will like me for myself.”

Like Jeff Chandler for himself? What do you think?