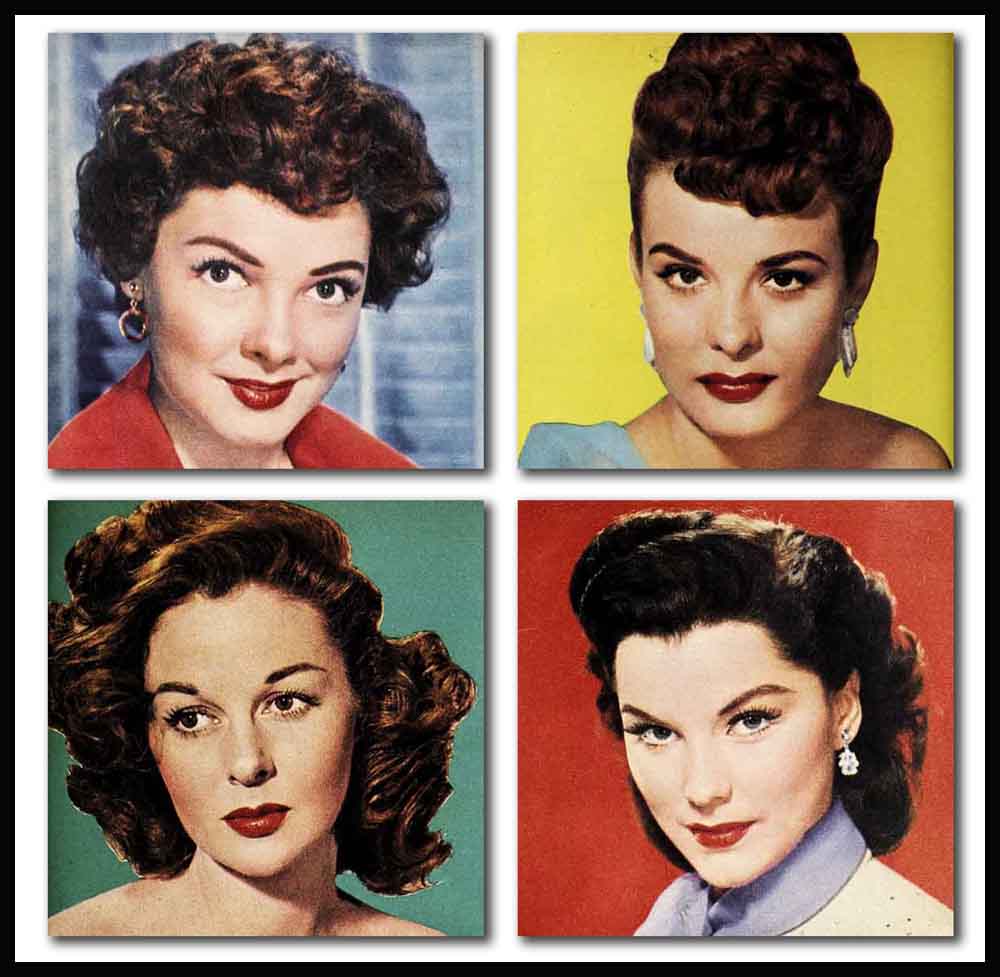 When a girl as luscious-looking as Kathryn Grayson, as sultry as Debra Paget or as wholesome as Jean Peters shares her evenings with a good book, it is time to look into the mystery.

Hollywood has its share of girls, like any town has, who have learned to their bitter disappointment that beauty does not necessarily bring swains swarming around their doors.

There’s a story I remember that proves this fact so well. It could have happened to almost anyone in Hollywood. But it’s Liz Taylor who actually was the heroine of the tale. When she irst hit stardom, she was constantly iff demand—to appear at charity parties, to open bridges, christen ships, the usual routine. This time, she was asked by the student body of UCLA to officiate as queen of their annual prom. Liz was pleased and flattered and willingly agreed, but on one condition: that the committee arrange for boys attending to ask her,to dance. She was sick and tired of being guest-of-honor at functions, the beautiful, un-touchable wallflower who had to stand serenely by and watch kids her own age have a wonderful, sociable time.

This can be an explanation for many of the younger girls like Pat Crowley and Kathleen Crowley who rarely leave their: own comfortable firesides. But I’ve done some sleuthing and discovered that Hollywood’s stay-at-home girls can be divided roughly into five categories: The Pure in Heart; The Broken Heart; The Light of Heart; The Lonely Heart; and The Happy Heart.

Kathryn Grayson is as much a stay-at-home as this town has ever seen. Her sole contact with the outside world is her stand-in, Virginia Whitmeyer. Not even her agent has Katie’s telephone number. Kathryn has always been sensitive and rather shy, but I used to see her around in the early days. Now she’s such a recluse that her good friends—and I like to think I’m one of them—are worried. She says she’s been in bad health for a long time. But I rather think that’s an excuse she has even sold to herself. She certainly looks fine on the screen. Anyway, five will get you nothing, that before a party or a premiere, Katie will back out at the last minute, pleading illness. Little things worry Kathryn—especially everything that pertains to her very large family. She feels responsible for them all. And for months, her home has been turned into a hospital because of her mother’s illness. This is fine and commendable. But Kathryn is young, and I hate to see her foregoing all the fun in life. I know she’d like to marry again, and it would be a good thing for her daughter, Patty Kate, whom Kathryn adores, to have a man around the house—for a lonely-hearted woman is not the ideal mother, no matter how much she loves her child.

When it was rumored that she had a mystery lover, she told me she wished she knew who he was, so she could call him up and make a date. But how can she find any man if she never goes out? You meet guys at parties. You meet them when you travel. You don’t often meet your mate, surrounded by your relatives at home. And relatives, no matter how hard they try, can’t cure a lonely heart.

There is certainly something mysterious about Debra Paget’s tendency to hide. After that first excited bleat of “I’m in love, and I’ve been kissed, but I can’t tell you his name,” Debbie and her mother and sisters and brothers have all clammed up again. Debbie even pretends that the flashing jewel on her finger is a family heirloom. True, the past year has seen an amazing change in the pretty brunette star. She now drives an orchid-colored Cadillac. Her clothes are no longer stamped “home made.” They are sleek, sophisticated, revealing lots of low neckline. But with all these changes—this window dressing—you still haven’t heard Debbie’s name linked with that of a male’s; never an item of Debbie with Mr. Smith or Mr. Jones at Mocambo last night. Debbie’s home most nights, and the beautiful clothes hang forlornly in the closet of her sumptuous bedroom, all white satin and crimson velvet.

Debbie’s young enough to be “light of heart” apparently. She isn’t brooding about the lack of males in her life. But she is certainly old enough to try the fledgling flights from the family nest and meet the world and maybe a man on her own.

Susan Hayward is another who has always stayed close to her own fireside. Before she and Jess Barker were married—in the days when you would have expected her to be one of the gayest gals about town—she was almost never seen out in public. And after the marriage and the arrival of her twin boys, her public appearances were even rarer.

And now in this third phase of her life in Hollywood, since she began divorce proceedings against Jess Barker, the stay-at-home pattern continues.

Susan is smart, ambitious and a hard worker—that’s how she got where she is today. Certainly she is a self-sufficient gal who doesn’t need the stimulus of parties and hoopla to make her happy. But like all women, she needs the companionship of men, and it’s perfectly all right with an old friend like Jeff Chandler, who knows and understands Susan, to go along with her in her desire for seclusion and the quiet dinner in a little, hide-away restaurant. But some day, smart Susan will have to find out that a truly “happy heart” doesn’t hide behind four walls!

The only time I have seen Jean Peters at a public festivity, outside her studio, was at the Photoptay “Choose Your Stars” party. Her escort was young Robert Wagner, who thinks she’s terrific. He told me that Jean has more humor, more charm and that she’s better company than any girl he’s met in Hollywood.

Jean could have her pick of the parties and her choice of the eligible men here. But night after night, she stays home in the big ramshackle house in Beverly Hills. Her only girl friend that I know of is her stand-in, Arlene Hurwitz. Sometimes her aunt from Laguna Beach comes to stay. Sometimes she p!ays hostess for her mother from Ohio. She sews, reads a great deal. Recently she left town so quietly that we only learned that she’d been gone when her train was wrecked as she was returning from Las Vegas.

As the months pass, Jean’s professional horizons broaden, but the mystery of her private life in her self-made hermitage deepens. She doesn’t have to be secretive, about herself, what she does, whom she sees. There has been no gossip, no scandal, no rumors of Jean’s past or present. There can be one explanation only. She’s in love, and she’ll do nothing to jeopardize that love by dating other fellows. Jean is the all or nothing girl, “the pure in heart.”

Often a movie queen stays at home be- cause a guy she hoped would call to take her out, called someone else. You can’t be a Joan Crawford, or a Barbara Stanwyck (as Liz Taylor’s story proves) and go alone to a party. And a fellow needs nerve and the sleuthing instinct to get hold of the unlisted telephone numbers to call these top stars and ask for a date.

A year ago, Barbara Stanwyck could have headed any list of “Stay-at-Home Beauties” while she nursed a broken heart. Sure it was a heartbreak: divorce, after thirteen happy years, from a man she loved, liked and respected. But Babs got wise to the old saying, “Laugh and the world laughs with you.” And today nobody would label her the “broken-hearted” glamour star. She’s made a new life for herself, beside and away from the fireside.

Joan, the epitome of Hollywood glamour, enjoys making a splash in public, but she’s learned to be almost as happy staying home with her own clique which includes writer Mel Dinelli, decorator Bill Haines and director Nick Ray.

You wonder why Olivia de Havilland fell in love so eagerly with Pierre Galante and rushed off to France to be with him at the price of a film assignment. For the same reason that Ginger Rogers was more than ready to marry youthful Jacques Bergerac, following the long spell of loneliness.

Doris Day, a happily married stay-at-home, knows just exactly how she got that way. “I saw so many night clubs when I sang with a band, enough to last me the rest of my life. Now all I want is quiet, my husband, and my son.” You’ll find Doris in the kitchen cooking, most evenings. Doris doesn’t drink or smoke, and she’s a hot girl with a volley ball. She hates off-color stories. Her idea of a real hot time is to listen to recordings. There’s nothing mysterious about her evenings home.

And Virginia Mayo is a stay-at-home by nature. And that’s where she’d be every night if she didn’t have a husband who happens to be a sociable guy. Mike O’Shea likes to be with people, lots of people, so he takes Ginny by the hand and out they go. Besides if you have a beautiful wife, you like to show her off.

And Deborah Kerr and her handsome husband, Tony Bartley, prefer to have their pleasures at home with the two junior Bartleys in attendance.

Doris, Betty, Virginia and Deborah are beauties who stay at home by choice. But, they have someone to stay there with them. There’s the difference! But even they had to leave the fireside to find the man they share it with.