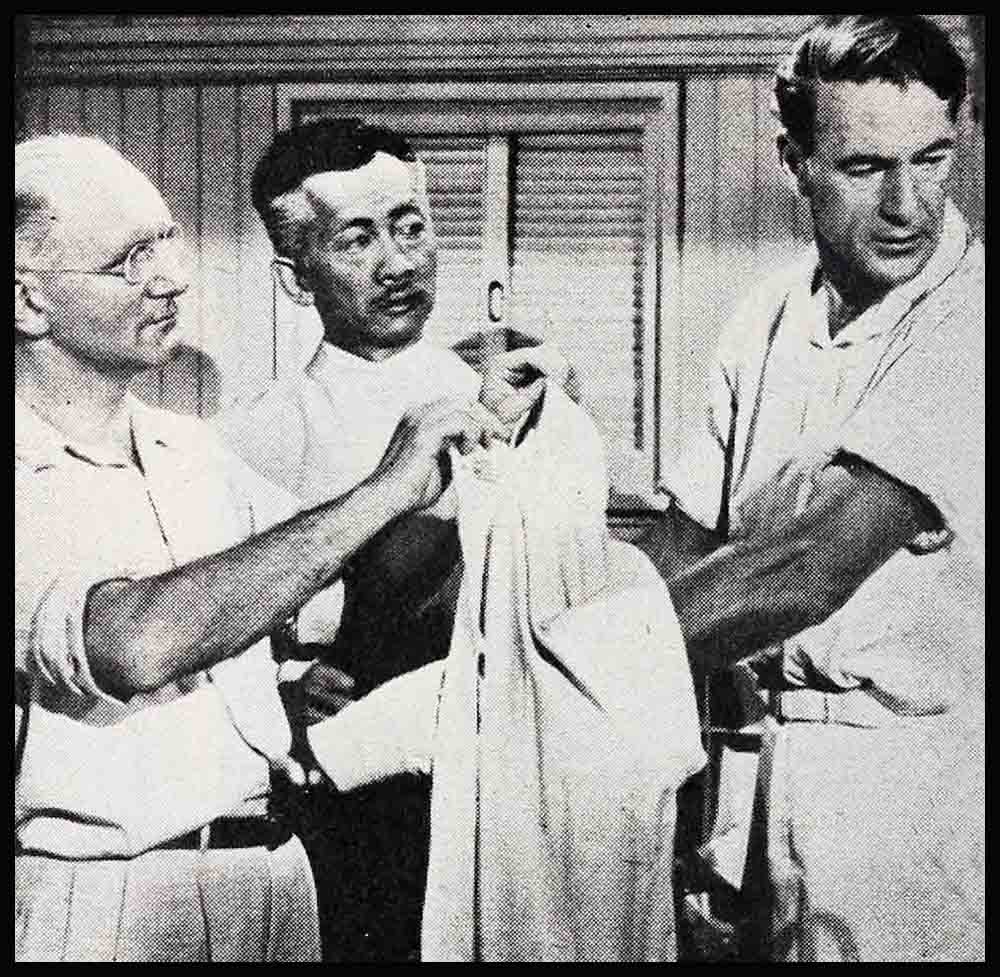 AMERICA’S movie-goers have chosen their favorite movie stars and picture of the year.

By the scientific polling methods employed by our Audience Research Organization, it has been possible to take the popular vote of the movie-going audience of the United States from coast to coast and to determine which stars and which picture are the actual winners in popularity with you who make up film audiences.

Now, after months of vote-taking from men and women, young and old, rich and poor, frequent and infrequent movie-goers, from those living in suburban and rural areas as well as in metropolitan centers, the final tabulations have been made and we can announce the winners, to whom the editors of Photoplay will award the magazine’s famed Gold Medals.

Most popular feminine star of the year—Greer Garson!

Most popular male star of the year—Bing Crosby!

Favorite picture of the year—“Going My Way!”

In the case of red-headed Miss Garson, she was chosen by a comfortable margin over ali the other top favorites for whom you cast your vote. No great surprise when you consider how Garson-conscious America has become since seeing her as Mrs. Miniver. But more telling than that is the strong lineup of pictures she has had since then—“Random Harvest,” “Madame Curie,” “Mrs. Parkington,” each a quality film in its own right. Thereby she has established her claim on the affections of the public.

Even so, before the final tabulation we were not certain whether the winner might possibly be Bette Davis, Betty Grable, Ginger Rogers, Judy Garland or one of the other contenders who would wear the laurel of being your favorite screen actress for 1944. As a matter of fact, it would have been interesting to have observed how the vote for Judy Garland might have been affected had “Meet Me In St. Louis” been released earlier and had thereby had an opportunity to play more widely before the end of the year.

Bing Crosby as winner of men stars would come under the head of a foregone conclusion to most movie-goers. He has long been one of the leading favorites among men stars, and he moved into undisputed first place with the general release of “Going My Way.” One reason for Bing Crosby’s continued popularity over a period of time is that he appeals to all types of movie-goers, rich and poor, city dweller and suburbanite, young boys who like comedians, young girls who like singers, mature matrons who like dramatic actors.

This year, when the tabulating began, it was not certain which of several top actors would win. These were Crosby, Humphrey Bogart, Bob Hope, Gary Cooper and Cary Grant. The final vote-counting indicated that beyond all question of a doubt, Crosby was the popular selection.

Perhaps you wonder why the new favorite of so many of you doesn’t appear in these findings. I am talking about Van Johnson, for whom comparatively large groups of you voted. The answer lies in that word “new.” In this business of taking polls we have learned that it requires an appreciable amount of time for a sensational newcomer to register with the vast over-all audience that makes up the movie-going public. Although the rate of acceptance by the public has been stepped up over former years, the time has not yet arrived when a young star, who has had only two major pictures with a third not yet fully released throughout the nation, is likely to land at the top of the popularity ladder. Even if “Thirty Seconds Over Tokyo” had already had its full run at the time our final results were taken the end of December, it is doubtful that Van Johnson would have had a chance of coming out ahead of an established star like Bing Crosby.

But our figures do reveal the fact that Van Johnson has by all odds shown the greatest gain of any male star in 1944. Who knows but that for 1945 he will be the star to receive Photoplay’s Gold Medal Award?

This is also true of Jennifer Jones among actresses. While she did not stand in the top group in the final tabulating, she among all new feminine faces on the screen gained most in public favor. Will Jennifer Jones be among the few names from whom the final winner will be chosen next year?

Now we come to your favorite motion picture for 1944.

“Going My Way” was head and shoulders above any other picture presented to the people we interviewed. It was the winner not only in the over-all poll, but also in each classification group—the age, sex, geographical, occupational and income brackets. It made no difference if they were the Saturday junior matinee serial fans or the fastidious three-a-year movie-goers. Nothing could shake the firm hold this picture has taken on the mind and heart of the movie-going public. It is the first time such a thing has happened in any poll we have ever taken.

The two pictures which took second and third places, Cecil B. DeMille’s production of “The Story Of Dr. Wassell,” which starred Gary Cooper, and “A Guy Named Joe” with Spencer Tracy, Irene Dunne and Van Johnson, were likewise leading contenders among all audience groups. These were followed in order by “Mrs. Parkington,” “Laura,” “See Here, Private Hargrove,” “Destination Tokyo,” “Two Girls And A Sailor,” “Since You Went Away” and “The Sullivans.”

There you have the top ten choices of Mr. and Mrs. American Movie-goer, as well as the junior miss and her boy friend. Study the list and you will arrive at an interesting point which throws light on a question that has been argued bitterly for the past year. Does the American public want war pictures? Frankly, our polls have been showing a public trend away from war films. But these results indicate that it is the individual picture which counts. If a film is good, the fact that its theme has to do with war will not stand in the way of its becoming a popular favorite. For of the ten top pictures in this poll, only three have non-war stories—“Going My Way,” “Mrs. Parkington” and “Laura.”

For those who would be interested in knowing how the battle of the sexes came out, we have compiled separate lists of the ten pictures selected by each group.

As a means of getting another type of cross-section of the public’s taste, while we were compiling our final scores we broke down the movie-goers into three groups: The frequent attenders, the average attenders and the infrequent attenders. Here are the top ten selections of the frequent attenders: “Going My Way,” “The Sullivans,” “The Story Of Dr. Wassell,” “Gaslight,” “Up In Arms,” “Mrs. Parkington,” “A Guy Named Joe,” “Destinatiol Tokyo,” “Since You Went Away” and “Two Girls And A Sailor.”

The average attenders chose: “Going My Way,” “Laura,” “The Story Of Dr. Wassell,” “Madame Curie,” “See Here, Private Hargrove,” “Mrs. Parkington,” “A Guy Named Joe,” “Two Girls And A Sailor,” “Since You Went Away” and “White Cliffs Of Dover.”

This last list represents the taste of what we might call the most selective group. They go infrequently, only when they find something of special interest playing in the vicinity. Note that “Dragon Seed” and “The Miracle Of Morgan’s Creek” appear for the first time on this list.

While we are on the subject of picture lists, I should like to call your attention to four films in particular which gave indication in our last-minute poll round-up that if they had had earlier releases they would have been among the year’s ten most popular pictures. “Meet Me In St. Louis” and “Thirty Seconds Over Tokyo” we have already mentioned briefly. The other two are “Wilson” and “The Princess And The Pirate.” All of these were popular in those quarters where they had been seen.

But those of you who rooted for them may take heart. To avoid penalizing these late pictures and the stars that appeared in them we eliminated from consideration any which had not been seen by at least a third of the persons interviewed at the time of the final poll so that they might be eligible for next year’s award.

Equal precaution was taken to see that pictures released in the very early part of the year were not handicapped by the fact that people were no longer thinking about them or the players they featured. One device used was to conduct a separate preliminary poll in the early summer tabulating pictures released up to that time. In fact, the entire operation of this poll has been designed to give every picture and star an even break for your vote.

Always in such elaborate breakdowns there are interesting bits and pieces of information which come to the surface. For instance, one sidelight bears on the oft-battled question of how many pictures a star should make to hold his popularity. Some top players have argued that if their studios put them into too many pictures a year they would go stale at the box office. However, our findings would indicate that the true and loyal admirers never have a chance to see too much of their favorites. As a general rule a star’s absence from the screen does not make their hearts grow fonder. The exception is Clark Gable. When he makes his return to pictures, he will find his following very little diminished by the two years he spent in the Army. With moviegoers throughout the nation he is still one of the prime favorites.

And here is food for thought on the part of those who would deplore the taste of the American-movie-going public. This poll proves their taste is good by anybody’s standards, for “Going My Way” which came in first by popular vote also was the number-one selection of the critics.

In the years to come we hope you will find the result of the Gold Medal Awards as stimulating and as exciting as do we who are on the inside watching the machinery which you have set in operation. Perhaps already you have your ideas of who will be the winners in 1945!

2- The Story Of Dr. Wassell

8- Two Girls And A Sailor

9- Since You Went Away

Dr. George Gallup is a unique figure in modern journalism. Originator of the famous “Gallup Poll,” which has forecast the winning party in five national elections, he has now founded Audience Research, Inc., to survey reactions of the movie-going public. To him Photoplay has entrusted the important job of determining your annual selections