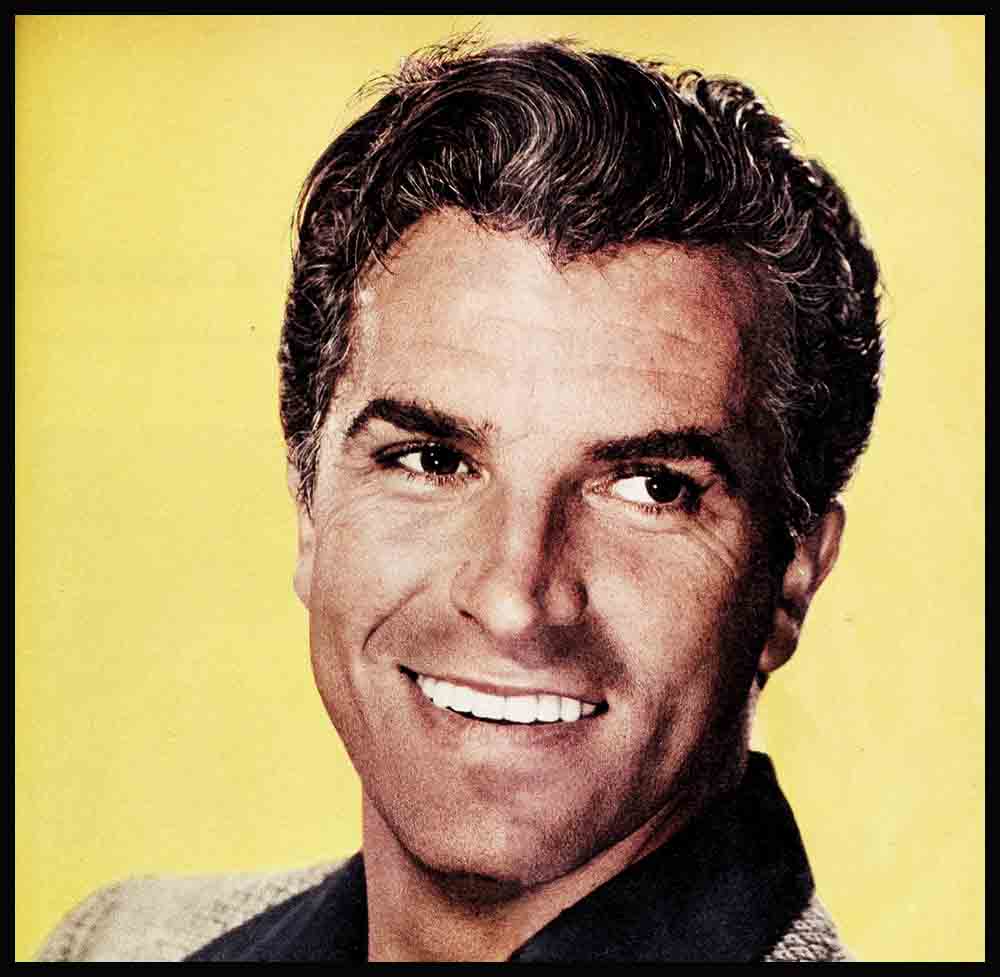 From Lana To Arlene—

“It is not by my plan that I work again and again with the ladies important in my personal life,” said Fernando Lamas dead seriously. “It is . . and he hesitated for just a second over the difficult English word, finally pronounced it exactly, “It is circumstantial.”

The scene was a studio dance-rehearsal hall, where the blood-quickening Argentine was rehearsing dance numbers for “Sangaree,” Paramount’s first three-dimensional picture. Hard at work with him was his co-star and current lady love, Arlene Dahl.

If private emotions overlapping one’s work have a visible effect on an actor’s performance, it was not at the moment apparent—in Fernando’s manner, at least. Something new seemed to have been added, however, to Miss Dahl. Her well-chronicled beauty glowed with a brand new warmth and sparkle. She laughed and joked with a relaxed joyousness and danced with the grace of a happy child.

But determinedly casual in slacks and a pullover sweater, his dancing feet clad for the moment in a pair of clumping—but comfortable—loafers, Fernando watched the dance director move through the routine, counted as she counted: “One-two-three-four, two and three, three and four . . .”

“You lost me,” he sighed, ambling to a spot in the middle of the floor, “right here.”

“We can always have it marked,” rippled Arlene, who hadn’t been lost at all.

Fernando looked ruefully down at his feet.

“Show it to me again,” he said, moving to the sidelines. “Life is too short,” he added, to all in ear-shot, “you shouldn’t worry.”

On the second run-through he got it, but he was still working. Arlene danced. “Isn’t she beautiful!” Fernando said, “and real sweet, and warm too . . . no matter what anybody says to the contrary. Of course,” he added unself-consciously, “you have to know where the buttons are.”

Fernando, taking his own advice, wasn’t worrying. Neither, apparently, were Producers Bill Pine and Bill Thomas, Director Edward Ludwig and assorted additional high brass watching the rehearsal. No doubt they were remembering the fabulous numbers Fernando had danced with Lana Turner, the love scenes between the two that burned up the screen in “The Merry Widow.”

They shouldn’t worry, as Fernando conceded. “When the camera starts, everything in me starts working.”

Arlene disappeared at this point to change from her chic navy blue suit to the ball gown of a southern belle which she would wear for this sequence in the picture. This gave Fernando a brief opportunity—which he didn’t duck—to discuss the other women who had been important in his life.

Their interlocutory divorce decree now in effect—it will be final next August— Fernando and his ex-wife, Lydia, have become good friends once more.

“We are civilized people,” he said. “We don’t have to hate each other.

“We were married for six years, and it didn’t work. I couldn’t tell you it was her fault, my fault . . . it was nobody’s fault . . . but some neutral force. We started arguing. Why? Why—that’s the important word Why did it.”

But it is over, and for good.

With his five-year-old daughter, Alexandria, now in kindergarten in Beverly Hills, Fernando says he has a “beautiful relationship—even better than before.

“I worried,” he said, “about what happens to a child when a divorce comes along. A child needs a father, especially a girl child. And Alexandria has one. She is with me every Sunday—I let nothing else interfere. We make every minute count. We talk . . . I pay attention. I have to make up for all the other hours. Never once—in our Sundays—do I say ‘Go away,’ ‘Please leave me alone!’ It is good.

“You know,” he said after a moment. “I have a tremendous faith in God, thank God. The whole show is run by Him. We wouldn’t know how ourselves.

“ ‘Help yourself,’ God says, ‘and I’ll help you. Push a little bit, try to get places, and learn every experience you have you learn something new, and as long as you learn that’s good—even if you make mistakes. But never make the same mistake twice! If you do that, you are on your own. You are responsible.’

“Not much to ask, is it? Just don’t make the same mistake twice!”

Fernando’s mistakes? His tumultuous romance with Lana Turner—which had ended almost violently in the packed and curious atmosphere of Marion Davies’ party—was that a mistake?

All the Hollywood columnists chronicled the story—how deeply Lana and Fernando were in love, how they would marry shortly after their respective divorces. There were stories of Lana’s bitter protests when her name was coupled with anyone’s except Fernando’s, and their warm love scenes in “The Merry Widow” seemed to bear out all the stories. Fernando even refused a role in “Sombrero” and went on suspension, rather than go to Mexico and be parted from Lana.

But shortly afterward, when Lana went to Lake Tahoe to divorce Bob Topping, Fernando went into the film, “The Girl Who Had Everything,” with Liz Taylor—and this was just when everyone was predicting he would follow Lana! Instead, Fernando settled down to serious attention to his career, took daily dramatic lessons at the studio, following his role in “The Girl Who Had Everything” with a starring role opposite Esther Williams in “Dangerous When Wet.”

Then, with Lana’s return to Hollywood, came the public break. Fernando was reported to have said he was not interested in marriage; this he has denied, saying that instead he said he could not consider marriage until his divorce becomes final in August. He still maintained that as performers in “Latin Lovers,” he and Lana could have pretended they were lovers.

But Ricardo Montalban replaced Fernando in Lana’s picture, “Latin Lovers.” When queried at the time about the change, Fernando said he didn’t know why the substitution had been made. “I don’t know. I was simply notified that I was out.”

Had the whole tempestuous love affair been a mistake? “How can one know?” asks Fernando. “How can one ever be sure?

‘I’m just an ordinary man, with ordinary defects, ordinary faults. I am human, thank God. I suffer. I love. I can love. And I can hate.

“How can you love if you can’t hate? It all comes from the same center. It goes this way—or that way. But it never stays the same—unless, of course, you are a phony.

But Fernando was no phony, just an ordinary man, as he had said, and look what had happened in the last three years!

“About Lana I have nothing to say,” Fernando said, without flinching. “Because there is nothing. It is over.

“You read a good book,” he added after a moment, “a beautiful book. You come to the end. You close it. That’s it. The end.”

Whatever happened in the last angry chapter—and the versions of it vary—it was the end—for Fernando and Lana.

And Fernando and Arlene? What of that new book?

How, people have wondered, was Fernando emotionally able to make the switch—off with the old love, on with the new—so, effortlessly. Is it essential for him always to have a woman by his side? Is it the strength of a woman he needs? Or a woman’s beauty?

And could it have been just any woman—any graceful and beautiful star? Or is there a deep and important reason—a really vibrant love this time—that made him turn to Arlene so quickly after his romance with Lana came to an end?

To set the record straight: Fernando and Arlene had known each other, long before the Lamas-Turner romance began. Arlene had worked with him on his very first screen test for M-G-M. But at that time, Arlene and Lex Barker were still married—happily, as far as the world could tell. And if Fernando’s marriage to Lydia was already beginning to strain at the seams, no one knew about it—nor, for that matter, would anyone have cared if he did know. For Fernando, then, had still made hardly a ripple on the Hollywood scene.

But by the time he was cast opposite Lana in “The Merry Widow,” the story had changed. Fernando was definitely a personality—in many ways, the man of the hour. And it was natural for him to gravitate toward his exciting leading lady.

And, it seemed equally natural for him, afterwards, to turn to the lovely Arlene, who had remembered him warmly from the days before Hollywood scarcely knew he existed . . . and who could bring him the feminine excitement his life demands.

But will this Dahl-Lamas book come to an end at the altar?

“I cannot answer that specifically, but in general I will tell you,” Fernando leveled. “I am the kind of guy . . . When I feel something, I act. I am impulsive. Whatever we feel in our family, we feel strongly. So . . . If I could think about marriage right now, you can say, I would be married in a week. But I cannot think about marriage . . . at least until August.”

Arlene had been in Palm Springs the week before . . . so had Fernando.

“In Palm Springs, you can touch the stars,” he remembered. “We touched a few.”

Arlene had arranged a party at the Racquet Club to celebrate Fernando’s birthday.

“A few good friends came. They brought a cake, presents. The band played that birthday song and I got very embarrassed.” He looked up, laughing.

Fernando does not embarrass easily.

Arlene was back on the set by now; tiny waist, lovely shoulders revealed by a deep decolletage, her dancing feet concealed beneath billowing hoop-skirted ivory satin. The dancing rehearsal proceeded.

Fernando made a mistake, and Arlene giggled.

“You must not laugh,” he chided her, winking. “This is a serious thing we are doing here.” He appealed to the onlookers. “I may forget to remember,” he said, “if Miss Dahl laughs at me.”

“Tonight!” Fernando shrieked, and then laughed. “Reminds me of the columnist who said to me ‘What do you do weekends?’ ‘Play tennis,’ I said. ‘Play tennis!’ he howled. Well, I do.”

They finished the dance at last.

“We’ll go on the road as a dance team,” Fernando grinned at Arlene, “a very broken-down dance team. Can’t you just see the names in lights: Arlene and Fernando!”

Arlene disappeared again, to change back to street clothes, and Fernando looked after her fondly.

“You know,” he said, “I’ve been very lucky in my life—at least these last three, four years.

“Sure there have been obstacles, but somehow I got past them. And good things happened too, circumstantially.”

He sat silently for a moment, apparently far away in some day dream or other. And then he said:

“I was a lonely little boy. My father died when I was one and my mother when I was four. It was not good. But even then, I kept thinking, for all this pain, God will make some compensation. The present was sad, but I had faith in the future.

“Plan, I told myself. You have to pave the road before you can walk on it . . . plan, but don’t worry. Everything will happen in good time, and for a good reason.

See what had happened.

“I would go through it all again,” Fernando said, “forget the bad, concentrate on the good.

“I’ve done all right for a little boy with no father, no mother. For life lies ahead of us.