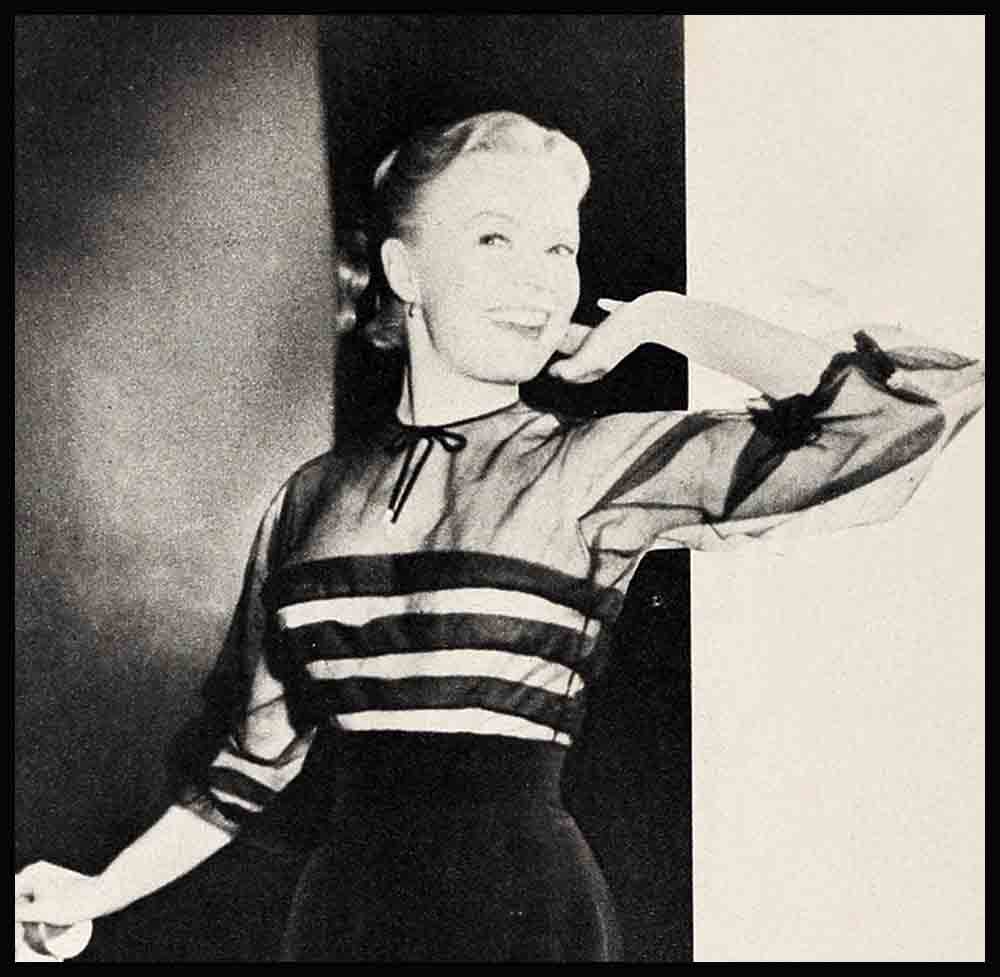 It was February 14, that day when hearts just automatically beat a little faster. In a corner of the classroom was a large box, covered with bright red crepe paper. For three days, its presence had created a great deal of excitement. Our eyes could not seem to resist straying from our books to that box. Now the morning had arrived and lessons were temporarily forgotten. The teacher stood beside her desk to hand out the precious Valentine messages. And as she called the names, there were giggles and blushes and shy sighs.

I tried to be nonchalant as I tore open a large envelope I’d received. Noting the signature, I glanced across the room at Billy, who had asked me to be his Valentine. all of a sudden, he had become completely absorbed in his history book. Billy was the boy who’d waited after school for me every day for weeks, asking me to ride home on his bicycle. At that time, we lived only a block and a half from school and, being far from senile, I was well able to get home under my own steam.

But each day he was there, the picture of devotion, smiling his invitation out of innocent blue eyes. No female can long resist patient adoration, and Billy knew it instinctively, even then. So that day I got on his bicyle, on the bar in front of the seat, and then that big adolescent hulk put his arms around me and went sailing off. How was I to know he could steer no-handed?

That was one of my first encounters with a would-be wolf. And since then, I’ve come to the conclusion that all men aren’t wolves. If their fangs sometimes show it merely means they want to be wolves, and they begin early in life to plan campaigns which are so subtle and clever that a girl needs to educate herself in the womanly art of self defense.

February 14 is a very special day, yet many people have little respect for the sentiment.

Every day is Valentine’s Day as far as some men are concerned—and the majority of these fellows are the wolf-types. That can be a sad fact for womanhood. When a girl is young and first begins dating she is usually confused and scared, and if she’s going with boys her own age they are often as insecure as she. But when she grows older and begins to think she can take care of herself, it is this very self-confidence which might be her Waterloo, because by that time she’s going with men who know all the ropes. This breed can be doubly dangerous, and while I hope men are here to stay, I consider many of them a scheming pack.

I learned my lessons when I reached Hollywood. I don’t mean by this that Hollywood has more wolves than any other town. The men here have the same lines, the same techniques. The only difference is that they’re generally better looking and wear more expensive suits. inside their crafty heads, they’re men, like everywhere else. I didn’t hit the “would-be” wolf pack until Hollywood because, for one thing, I came here when I was still of high-school age and I finished my education at the studio school. During that time I was always surrounded by chaperones, and I missed the high-school and college dating that most girls have. When I wasn’t working, there were my sisters Dottie and Evvie, and the three of us were together so much of the time that we put up a formidable front. If any male around town had designs on any one of us, he sooner or later gave up the prospect.

Once I started dating in Hollywood, I began making observations. At first I considered the galloping type the most dangerous. These were usually the life of the party and the party wasn’t over very lone before they were revealing their unbrotherly attitude, regardless of how little they knew me. But there’s one thing about a fast worker—a girl knows immediately that she must be on her guard; these men are transparent.

There are all sorts of plots. For instance, the one that builds up confidence. “I want to settle down,” he will say. “I’ve always wanted to get married. I can’t think of any better way to live than in a little cottage with a sweet and loving wife.”

I consider this one a sneak punch. The man makes the girl think he’s violently in love with her, that he is hers alone, that he is the solid type who would make a good husband. And all the time he’s adding other numbers to his telephone book and handing the same line to every girl he knows. By now I can recognize this type after the first few sentences.

Then there is the man who appeals to a girl’s sympathy. He laments loud and long about his miserable childhood, his aloof mother, the bad breaks in his career, his lack of friends, the fact that nobody understands him. This is a direct appeal to the maternal sense, for most girls like a man they can fuss over and mother. But I figure if they haven’t any friends there must be a good reason for it.

Some men make a business of old world charm—the hearts and flowers and lacy Valentine kind. I recall one swain who had taken me to dinner in town a few times. I found him quite charming, but after a girl dates a few men she develops an instinct about their intentions. This one’s approach screamed, “Caution!”

“I’ve found an enchanting place way out in the country,” he said only a few weeks after he’d met me. “Gypsy violins and all that sort of thing. I’d like to take you there.” I decided to take him up on it as a test, but under my own terms.

When he came by to pick me up on the appointed evening there were two friends of mine in my apartment. “You talked so much about this charming place,” I said sweetly, “that I thought Fred and Mary might like to go along with us.”

You should have seen his face. It fell apart like a clay pigeon, and later that night he sat at dinner in this particular hide-away, glaring at the Gypsy musician.

That reminds me of the man I met when I was on a personal appearance tour. Mother and I were having dinner at the hotel when he came over to our table. I had met him before and, after he was introduced to Mother he asked if I would join him for breakfast the next morning in his suite. “I’d be delighted,” I said. “What time would you like me to come up?” He looked ecstatically happy when he left our table, but the next morning when Mother and I showed up for breakfast, he knew he’d been outflanked.

Mother has always been my best friend in many ways, and particularly when it came to lending a helping hand with the would-be wolves. My sisters, too. Evvie used to want a report every time I came home from a date. “Did he kiss you?” she always wanted to know. If I was coy about it, she’d glare. “How many times?”

It was mother who helped in a more tangible fashion. She was on hand when I arrived home. Or else I’d lean against the doorbell and in exactly thirty seconds flat she’d have the door open and stand beaming at my date. “Won’t you come in for a cup of coffee?” she’d say.

I could always discover the wolves from their attitude toward my family, and I think it’s a pretty good rule for every girl. If he is at ease with them, doesn’t resent their occasional presence, you don’t have too much to worry about.

I often think how uncertain I used to be during my first days of dating and wish there were some way I could help the teen-agers who are now going through the same thing. Sometimes men can make you feel awfully inadequate and unsure, and this treatment is definitely unfair. If you refuse to let this type kiss you, he responds by saying, “Oh come now, we’re here for a good time, aren’t we?” This is the type that I feel never has a good time. He doesn’t know that courtship shouldn’t be a wrestling bout. He never will learn that because of his insistence and disrespect for a girl’s wishes, he loses all chances with her. Even worse is the character who sneers at the girl. “Aren’t we Victorian?” he says. “I didn’t know you were old-fashioned.” Your answer to this is that you’re prudent, not a prude.

I’m sure most men instinctively want to respect a girl, to put her up on a pedestal, and if the girl wants that kind of adoration she can get it by deserving it. She can act like a lady and dress like a lady, and then if the man makes advances and is refused, he might pretend to be disappointed, yet he is happy in the knowledge that he can respect this girl.

I don’t mean to give the impression that I belong to an anti-kissing club, but the time, the place and the person are important. The man himself is the most important. There is one little item that it seems takes most girls a long time to learn. She might regard a kiss as something to be taken lightly; she might even distribute her kisses like a bridge player deals cards. But she should learn that a man does not take a kiss lightly. It is something very important to him.

Personally I feel that time is too precious in this life to waste. I don’t go out with a man unless he has a definite appeal or charm for me and, at the risk of hurting the feelings of those who don’t, I tell them so. This seems to be an immense problem to many teen-agers; how to tell a boy you aren’t interested in him. I figure honesty is the best policy and have said quite frankly that both they and I would be wasting our time. I think it’s fairer in the long run to both parties. I use these methods both for the wolves and those who are the brotherly type. For despite our experiences with the would-be Romeo, we still prefer to go out with men rather than mice.

I think it’s merely a matter of being selective. A date is important, not just something that grows on trees. I can remember the days when I collected cloisonne hearts on a charm bracelet, each one donated by a different boy, but I’ve since learned to pick and choose the men I date. First I find out if they’re sincere, then let time tell the tale. And I know by now that my own conduct will guide the course of our friendship. Despite all their male tactics, a woman can make a man anything she wants him to be—the right man. Otherwise, no matter what the time of year, I’ll issue the warning, “Don’t be my Valentine!”