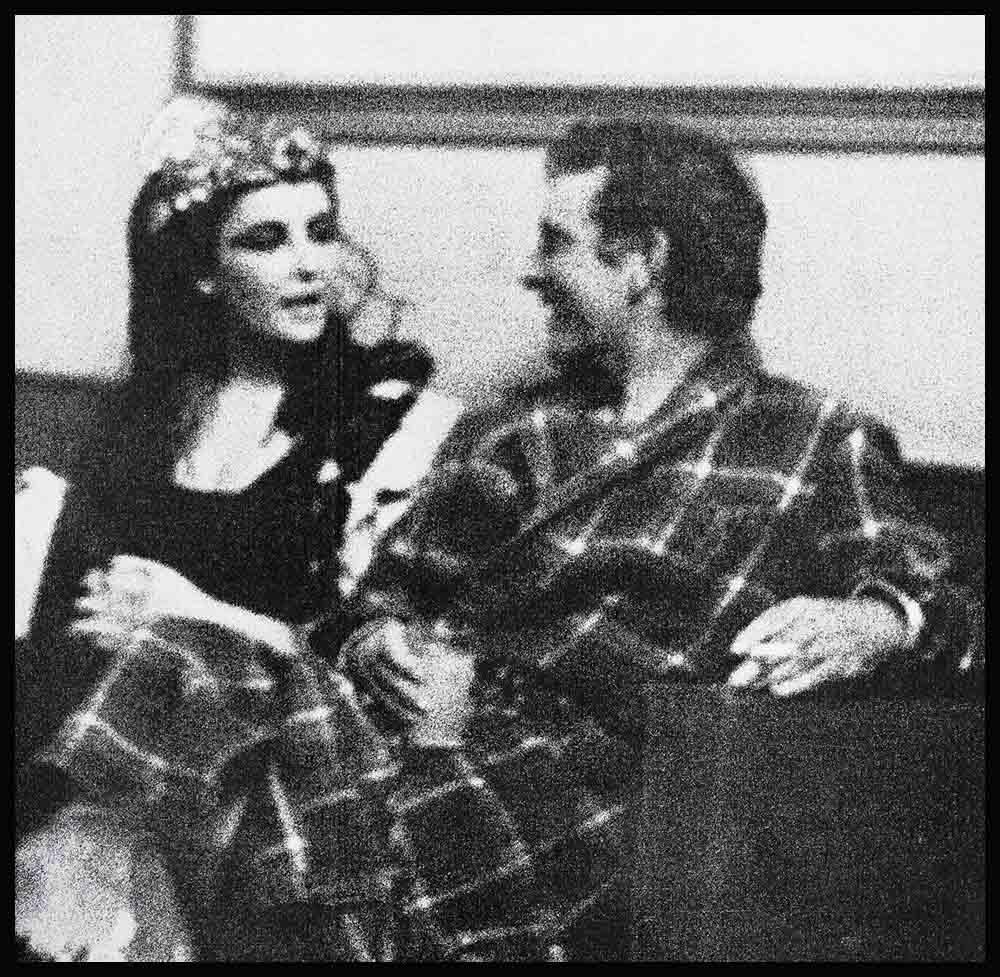 It began with a phone call; it ended with his public humiliation.

The phone call: It was Eddie calling his home in Rome from a retreat—their chalet in Gstaad, Switzerland.

A man answered. Eddie demanded, “What are you doing there?”

The answer: “It’s the same thing.”

Reporter Earl Wilson’s inside story vouches for this. And for the second low punch to a man who is probably the world’s most vulnerable husband. . . . This time Burton told Eddie, “I’m in love with your wife.” And Liz stood by, beaming with the joy of being loved off-screen by her “Cleopatra” lover.

What it did to Eddie was to put him into a medical clinic in New York, very hush-hush. He’d flown over “on business” and landed in the hospital. In twenty-four hours he was out again, just as secretly. There were rumors that he was in another hospital “somewhere,” because his first hide-out had been discovered. He was a hunted man.

And then—the hunted man stood at bay and faced the pack. Before a hundred newsmen who had demanded a press conference, he stood up and flatly denied that the fabulous Taylor-Fisher marriage was over. Burton? Romance? Nothing to it! . . . He put in a call to Rome, to Liz, so she could join him in denying the bust-up. According to columnist Dorothy Kilgallen, it was a call pre-arranged with Spyros Skouras, head of 20th Century-Fox, when he’d come flying to Rome in a panic to save his twenty-million-dollar investment. Liz promised! She promised Skouras and Eddie that if the call were put through, she’d back Eddie in swearing their marriage was a bed of roses. But when the moment came, Liz couldn’t get herself to tell a lie. She crucified Eddie with silence. And he was honest enough to turn back to the press and tell them: Liz didn’t want to make a statement.

“How is it,” one of them asked, “that all the denials come from you?”

Another told him: A Rome paper would soon print a picture of Liz and Dick in an off-screen, private-life kiss. He sparred. “I’d like to see it.”

He saw it. It was an off-set shot sneaked via a telescopic lens by one of Rome’s notorious “paparazzi.”

That night the world knew Eddie’s humiliation—while he wrestled with it—alone. That was the night Liz and Burton, between them, destroyed Eddie Fisher. . . . It was also the night they publicly frolicked in a Roman night club till the wee hours—and kissed some more. Eddie was away, and Mrs. Burton was away—she’d gone to London. To help her brother-in-law decorate his new home, she said. Also to get the children out of Italy where they were “learning too much Italian.” The wrong words, perhaps?

The destruction of Edwin Jackson Fisher went on . . . and on . . . in every edition of every paper the headlines screamed new humiliations . . . till the world could hardly bear his misery any more. Yet, everybody read, fascinated.

They read Burton’s appreciation of the woman he loved. “You don’t know what fame is until you’ve walked down the Street in Rome with Liz. Everybody’s trying to pinch her, and being very insulting—she gets torn to bits.”

They read, from Dorothy Kilgallen’s Rome informant, that no one had expected Burton to take his “romantic fling” with Liz seriously, thinking he’d go back to his wife “as he’s done before.

. . . But I guess we underestimated Liz. She’s proud of Dickie’s effect on other women—but also jealous of it. That explains her last trip to the hospital.” Burton had gone to Paris for a few days to shoot on another picture. “And she didn’t think he ought to go anywhere without her. So she figured out a way to dramatize her passion for him and bring him scurrying back.”

So burning is that passion, that in Rome it is believed that the only way to get “Cleopatra” finished is to keep Burton in Rome, on salary, even after his own scenes are over. “Because if he packed his bags and left for London tomorrow, you can bet Liz would follow him. Or do the hospital bit again to make him come back. She certainly wouldn’t show up on the set.”

Now the world knew what Eddie had known—and tried to hide—for some time. That in this marriage, he was low man for sure. And maybe the final humiliation was this: that in the middle of all the fireworks, Liz and her children, including Mike Todd’s Liza whom Eddie, with a heartful of love, had adopted as his own—Liz and the children had piled into Burton’s car and gone for a happy day at the beach.

Suddenly Liz’ manager, Kurt Frings, flew to Eddie with a “personal and private message.” . . . Next Liz phoned her lawyer, Louis Nizer, and begged him to fly to Rome at once—her marriage was “dead and done.” She “wanted out.”

Next day Nizer announced it: Liz and Eddie had “mutually agreed to part” and divorce proceedings would start soon.

And then the whisperers put two and two together, and said Frings’ secret—and fantastic—errand had been to offer Eddie a deal from Liz: a producer’s career in return for a smooth divorce.

Immediately after the official divorce announcement, reporters hounded Debbie Reynolds for a statement, but she went into seclusion, said nothing.

But Eddie’s friends said they hoped with all their hearts he’d “escaped in time.” And everybody else said Liz will always be Liz—but Eddie Fisher will never be the same.