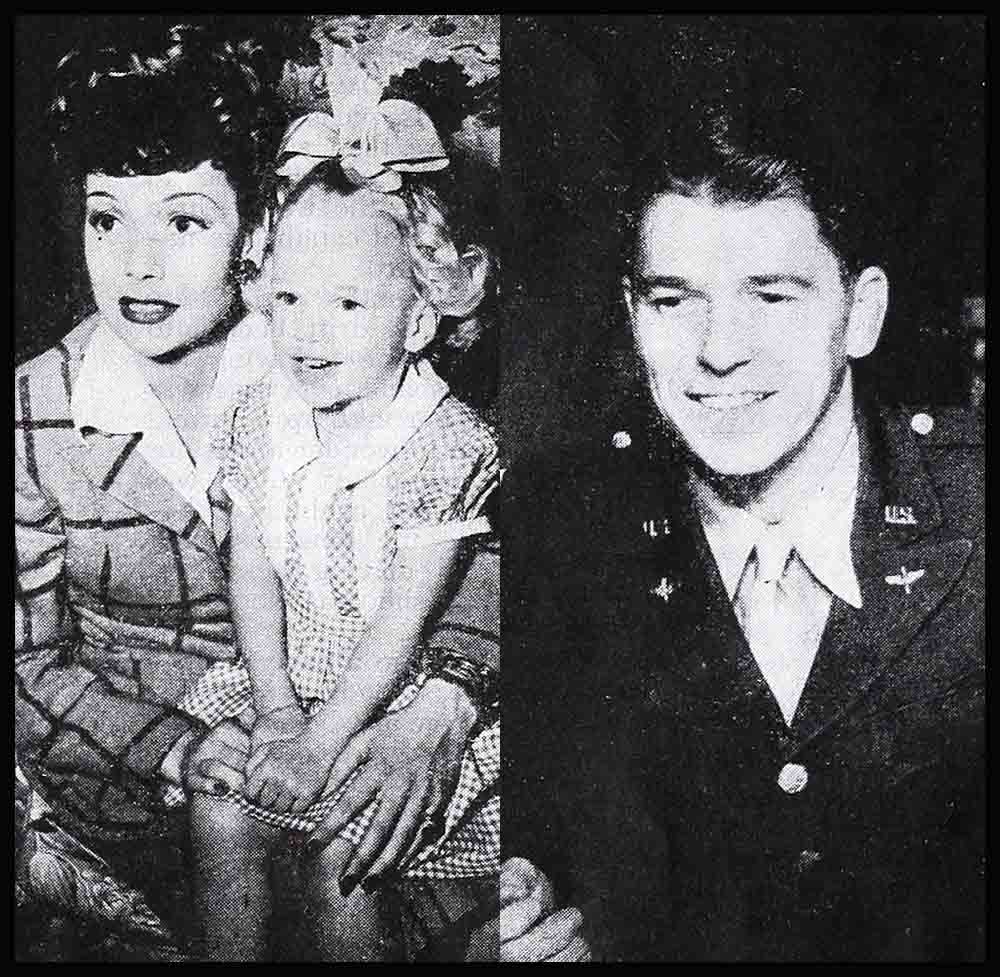 This Is The Truth About Jane And Ronnie

SOMETIMES a girl’s best friend is a hot rumor. On more than one ocasion a bare whisper has set me off on the trail of some of the biggest scoops of my career. And so, of course, I like those rumors.

But there are others. Rumors about your best friends. Rumors that nag and dog at you and which, in spite of the fact that you hope you know better, make you wonder about some of the happiest married people you know. These rumors I hate.

I hated them particularly when they started to spring up about two of my closest young friends in Hollywood—Jane Wyman and Ronald Reagan. I didn’t see how anything could happen to these kids. Why, I was with them (or they were with me) on the first personal appearance act I made out of Hollywood.

Jane and Ronnie fell in love right under my nose. And “fell” in love it was—a thud that started as they gazed into each other’s eyes behind the footlights and continued until they were standing before the pretty flowered church altar after we returned to Hollywood. Later, my Doctor and I gave them their wedding reception at our home.

That was five years ago. Five years in which Ronnie soared to the top in Warner pictures to the point where he was racing Alan Ladd and Frank Sinatra for honors with the subdebs. Then the war came along and he went into the service.

They were five years of wonderful happiness for Jane in her marriage. Maureen Elizabeth Reagan (that cute towhead) came along to be adored by her doting parents. True, Jane wasn’t satisfied with the way her own career was going along. But she would say, “I have so much of everything I won’t be unhappy because I’m not getting the pictures I want.”

The Reagans were just Mr. and Mrs. Average Citizen of any good-sized town. They weren’t particularly good “copy.” Far from it. Nice married couples seldom make the headlines. When people spoke of them, or scribes batted out stories, they invariably said they were “that nice young Reagan couple.”

And then, for no reason, out of the blue the rumors started. They began with whispers, rustling like leaves through the cocktail parties. The rustles sounded like this, “Did you notice that Ronnie left the party an hour ahead of Jane?” Or, “She seems to enjoy dancing with other men as much as with her husband.” Or (and this hit print in several spots), “The Ronald Reagans are readying an unfortunate announcement any minute.”

I “pooh-poohed” them. I’d say, “You don’t know how in love they are. Ronnie would never let anything come between him and Jane.” And the whispering chorus would argue, “Weren’t Jennifer Jones and Robert Walker very much in love? And Joan Blondell and Dick Powell?”

It was a challenge I couldn’t let pass. I called Jane and told her I wanted to see her. “Look here,” I said, “I know you kids are happy. I want to write a story and settle all this talk for once and all. But if you are having trouble—for heaven’s sake tell me and don’t let me get out on a limb writing a story how cooing you are.” Jane hesitated a minute. Then she said in that level, young-modern voice of hers, “You too, Louella.”

I had the grace to blush slightly, I’m glad to say. “Then how did all this talk, talk, talk start?” I asked.

Jane had picked me up to drive me to lunch at Romanoff’s. She looked as though she had stepped off the cover of a magazine. Her hair, once platinum blonde, is back to its natural chestnut-brown shade. She was wearing a smart chartreuse wool suit and carrying an umbrella-shaped handbag to match. A beautiful ruby clip with matching earrings Ronnie had given her completed one of the smartest ensembles I had seen this fail.

But Jane’s usually pert, happy expression was missing. She isn’t laughing this off. My girl friend is plenty hot under the collar—and she’s hurt. I could tell that when she started to talk.

“I swore I was not even going to deny this silly talk,” she said, “but you’re different. I want you to know, Louella, that Ronnie and I haven’t had even a good old-fashioned family argument. We both thought that when people kept on seeing us together that these lies would die a natural death. But they keep on and on.

“I’ve thought to myself, ‘How in the world did this thing start?’ We’ve never staged an argument in public—or even in private.

“Of course, I have a hot temper. You know that. But Ronnie, who has the disposition of an angel, just lets me blow off steam until I get my mad out of my system. He never fights back. And it takes two to make a quarrel.”

We had arrived at the cafe, found our table and ordered before Janie got back to the subject again.

“I believe rumors crop up when there is any kind of a change in the status of married couples,” she said musingly, “and the war has made certain inevitable changes in the routine of our lives.

“When Ronnie went into the service he was making big money as a top star at Warners. I was just a supporting player and didn’t earn anything to compare with what he was making. Now I’m carrying the ball, financially. His captain’s salary isn’t enough for us to keep on as we did before the war—or even half as well. And so it is now my salary that gives us the little extras. But don’t think for a minute that Ronnie isn’t still the head of his own house!

“Some people find that hard to believe. They get in little sly digs, disguised as compliments. ‘Oh, Janie, dear, you’re doing so well now. Is it true that when you went to a restaurant the other night the waiter said, “What does Captain Wyman want to eat?’ ”

I said, “I bet that tickled Ronnie,” because I agree with Jane that he has the disposition of an angel and instead of getting sore about it he’d be amused.

“Oh, that kind of talk never bothers him,” Jane agreed. “But Ronnie has had to fight the terrible disappointment of not getting overseas. His very bad eyesight has kept him at home. He has been stationed near Hollywood ever since the war broke out. But you see that puts him in the restless position of being in the Army—and yet not at the fighting front.”

I happen to know that Ronnie can’t see two feet in front of him and had to have a special type of lense fitted over his eyeball when he was making pictures. But this is irritating and he could stand the glass in his eye only for a limited time.

“What I can’t understand,” Jane went on, “is the eagerness with which some people start trouble rumors. A certain woman telephoned twice to say she had heard our home was for rent or sale. I suspect very much that it is the same woman who tried to marry Ronnie off to one of her relatives before our marriage. Believe me—I’m going to find out who has started all this talk and when I do—” Jane’s eyes flashed. Frankly, I wouldn’t want to be in that person’s shoes!

“It has all become so bad lately that I find I am not acting natural,” Jane admitted. “Last week Ronnie’s brother asked me to have luncheon to discuss a radio show. But we had to have lunch at the house because I didn’t dare to be seen with a man in a restaurant. That would have been the birth of another rumor.

“And here’s another incident: Ronnie, you know, has to get up early, and so the other evening when we were at a party at Ciro’s he left an hour before I did. After he left, I danced with Van Johnson who is a very good friend of ours. And the very next day a columnist had an item telling of how I was ‘looking into Van’s eyes’ while we danced—or some such rot. No one paid any attention to the fact that Ronnie and I had danced before he departed. Besides, Ronnie doesn’t rhumba and I love to—so I usually have a different partner for this number.”

Jane went on. “That is the way rumors are born, Louella—little silly, ridiculous things that you hardly know how to fight. No matter what you do, it seems wrong.”

The little Wyman girl, I must admit, isn’t always tactful, either. Not long ago she went East on a five-weeks’ Bond tour and to make personal appearances. She was so burned up over the way certain writers failed to believe her when she denied that she and Ronnie were having trouble, that she carried her anger with her to New York. The very first interviewer started asking her questions about her private life and her supposed battles with her husband. Janie hit the ceiling. She told the Warner publicity department that she would see no more newspaper or magazine writers unless they agreed not to bring up this subject.

“Instead of stopping the gossip,” Jane explained, “it just added fuel to the fire. They figured if Wyman wouldn’t talk—she must be hiding something!

“The real truth is, Louella, that I don’t want to embarrass Ronnie with a lot of denial stories. He is in the Army. I am an actress. He is a fine officer and his men are devoted to him. The Army frowns on sensational-type stories printed about the men in the service. But if I keep quiet—that, apparently, is wrong, too.

“I can tell you truthfully that the only fight in our whole life was staged when we were traveling with your company—and it wasn’t anything but a lover’s tiff. Why, I don’t even fight with my in-laws.”

It’s too bad that this particular blot had to crop up when Jane is otherwise so happy. I know what it means to her to be getting the breaks now. She’s an ambitious girl and a good actress. I can remember the long talks Ronnie and I used to have about her. He couldn’t understand why some smart producer didn’t recognize her talents and star her. “Janie has everything,” her husband would tell me, “Youth, pep, enthusiasm—a lovely figure and plenty of talent.”

She didn’t come along as fast as he did. But in the past year the Wyman stock has soared. The girl is terrific in “The Doughgirls” and she has one of the best parts of the year, the heroine in “Lost Weekend.’’

Our luncheon hour was drawing to a close and Janie was due for a fitting at Paramount where she’ll make “Lost Weekend.” I believed her when she said:

“Everything is just right, now—Louella. Ronnie and I have our lovely home, Maureen, our duties and our careers. We are far luckier than most young couples in that even the war hasn’t parted us. We have so much. Can’t gossips let us keep our happiness?”