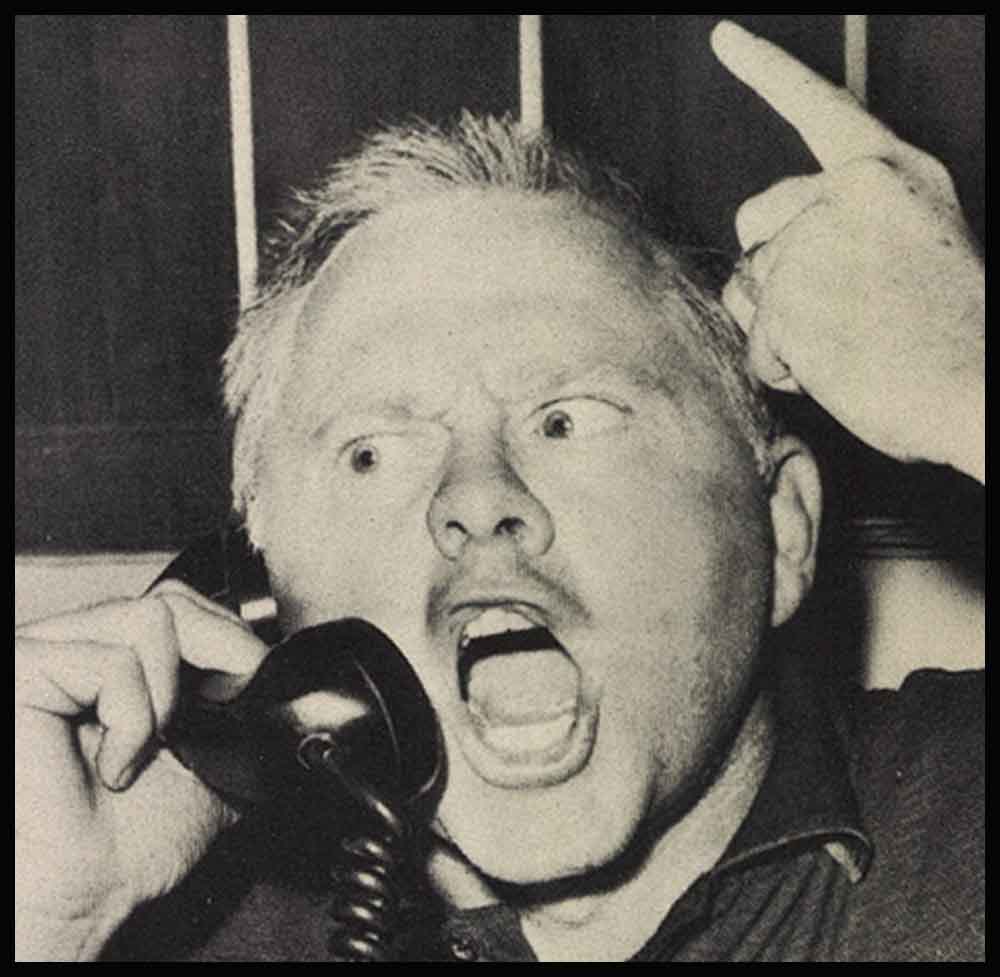 Among his principal creditors he cited the U.S. Internal Revenue Bureau, with a claim totaling $106,686; the State of California, which also wants a big hunk of lettuce for back taxes; and three of his * pretty ex-wives, who have been clamoring for back alimony and child support.

How muddle-headed can a little guy get?

The INSIDE STORY is, a lot of people in Hollywood chortling merrily over Handy Andy’s money troubles. For although he has been a big-time per- former almost from the time he first began to talk, and his versatile talent for show-business is widely admired, his inflated ego, cocksure brashness, loud- mouthed bragging and belligerance—and above all his wantin’ ways with women—have brought the Wunderkind of Wonderland more enemies than friends.

As a matter of fact these same characteristics, plus a compulsion for long-legged lovelies, are reputed to be largely responsible for his current financial plight.

Born Jo Yule Jr. in Brooklyn in 1920, from the age of two months he was brought up back-stage in the theatre. His pater, Joe Yule Sr., was an old-time burlesque comedian; his mother, Neil Carter, an eccentric dancer. They played in vaudeville together.

Junior made his stage debut at the tender age of 3. One night during the vaudeville act of the veteran comedian Sid Gold, the take goes, the tiny tot toddled out on the stage, stood on his head, sang “Pal of My Cradle Days” and stole the show.

His proud parents promptly incorporated him into their act. Wearing a tiny tuxedo and smoking a big rubber stogie, he impersonated a midget. And that’s how he got his first job in the movies a year later, at the age of 4—impersonating a midget in the film “Not To Be Trusted”.

However it was the “Andy Hardy” series that rocketed Rooney to stardom, made him Hollywood’s hottest box-office attraction in 1938, 1939 and 1940—along with such film greats as Clark Gable and Wallace Beery—and poured a gross of over $30 million into MGM’s coffers.

A precocious 20 when he completed eight Hardy pictures and was earning $1,000 per week, success spoiled hardy Andy. He got a swelled head, and other parts of his anatomy were singularly affected.

While MGM was going all-out to project him in the image of the all-American boy before the movie- going public, Mickey was privately projecting him- self in the image of the all-American wolf offstage. Never the shy silent type, his lengthy monologues on the subject of sex never failed to amaze male and female co-workers alike on the “Andy Hardy” set.

Nor was it just talk. While ostensibly residing with his parents in the lavish home he built for them in Hollywood, the capsule Casanova in kneepants maintained a luxuriously-furnished apartment in Beverly Hills known only to a few cronies—and to a long list of models, starlets, waitresses and more lowly ladies of the evening. Mickey wasn’t particular, he played the field. Soon sensational rumors of the most extraordinary goings-on in Andy Hardy’s secret hide- away were floating around town.

When the studio finally got hep to the lusty love-life of its prize performer, it had a fit of hysterics. The juvenile Don Juan was hauled up on the carpet for a stern lecture on the morals and immorals of Hollywood, and the private obligations of a great star to his public. To protect its investment in this valuable property, MGM assigned a husky attendant to trail him around and make sure that he didn’t get into trouble.

Not that Mickey ever needed any help, in case he did get into a jam. For all his small size, he was fast on his feet (he once won the junior tennis champion- ship of the Pacific Southwest) and a wild man with his fists, when his temper was aroused. Experts who watched him work out with the gloves at the studio said he had all the makings of a professional fighter.

Shortly after his dressing-down Mickey met a tall; dark-eyed brunette beauty from the cotton-picking area of North Carolina. Originally imported to pose for a cheesecake art in bathing suits and scanty lingerie, she had managed to wangle a small role in a forthcoming MGM production. Her name was Ava Gardner.

Although she towered above his 5 feet 3 inches, to Handy Andy the lush lank lassie from the hill-country looked just dandy. After an ardent three-months courtship, she agreed to marry him. Their marriage took place in January 1942, and lasted just eight months.

Who was to blame for that bustup isn’t known. Whatever it was Ava was looking for — and Mickey didn’t have—she never has specified. A much-married lady herself since then, she apparntly hasn’t found what she wants in any of her other spouses, either. And for once the usually loquacious Rooney remains discreetly silent on this subject.

At any rate Ava was the first of a series of longlimbed lovelies to look down on the mighty midget of the movies and murmur “I do”, while he stood on tiptoes to circle the third finger of the left hand with a wedding band. Mickey’s curious predeliction for elongated eyefuls in and out of marriage has led wits at the Mocambo to dub him “Hollywood’s Big Dame Hunter”.

Shortly after his first divorce, in 1943, Rooney entered the Army. He became one of the most popular in the Armed Services. The following year while in uniform he met and fell for another towering torso, Betty Jane Rase, a dark-eyed beauty who recently had been crowned Miss Alabama.

In a whirlwind, one-week courtship he completely swept her off her feet and married her. After a brief honeymoon, the new bridgroom went off to war. She was waiting for him when he was discharged from the Army in 1946, but they agreed to call it quits a year later. This marriage lasted just three years and eight months. Betty Jane, who has presented her husband with two boys, received a $100,000 settlement.

Analyzing the reasons for the breakup of this marriage, one Hollywood observer said at the time: “Mickey refuses to grow up. He still insists on playing the role of fun-loving Tom, one of the Rover boys.”

So the Rover Boy, footloose and fancy-free, roved the town again keeping his eye peeled for female skyscrapers. He soon spotted a very seductive one, a tali, lithe, comely, blonde actress named Martha Vickers. When he married her after two months of steady dating, in June 1949, Rooney told newsmen:

“If I don’t make it with this one, there’s something radically wrong with me. I got me a swell gal this time, I guess I’m a lucky guy.”

As it turned out, he was over-optimistic. Two years later, after she had presented him with another son, they agreed to call the marriage off. Mickey didn’t reveal what was wrong with him, but Martha was not so reticent. She told the divorce Court:

“I don’t think I saw him more than one or two nights every week. He would walk back into the house like nothing happened, without offering any explanation for his absence, and ask for his dinner.”

The poor guy apparently was hungry.

Mickey was always an easy guy with the long green. “I believe the guy really enjoys shelling it out, even when he hasn’t got it,” one of his friends observed. ‘‘And when he’s not married, the sky is the limit. Because that’s where the tali girls are.”

A scant year after his third divorce Mickey eloped to Las Vegas with Elaine Mahnken, a flame-hair-ed 22-year-old model who was tali and terrific, like his other wives. That marriage hung up a record by lasting seven years. When they finally parted, Elaine blamed it on Mickey’s Irish temper.

She won a divorce—and an unspecified alimony settlement—in May 1959. Mickey never was one to tarry long between marriages, but this time he was even speedier than usual. In fact he didn’t wait for the divorce from Wife No. 4 to become final before he latched on to No. 5.

Some three weeks after Elaine’s divorce, Mickey announced that he and pretty, young Barbara Thomas-en had been quietly married the previous December. Which went that technically he was a bigamist for about six months.

Even more noteworthy, however, is the fact that the little duffer at long last had changed the script and chosen a wife who could look up to him! At 5 feet 2 inches the current Mrs. Rooney actually is one inch shorter than her spouse.

Mickey’s multiple matrimonial ventures have cost him a small fortune. The only one of his ex-wives who hasn’t put the bite on him for alimony is Ava Gardner. It would sure take a lot of loving to make up for the kind of dough Mickey has had to shell out to his ex-wives.

Meanwhile for a long while the pint-size performer has been scraping the bottom of the Hollywood barrel. As his ex-business manager Red Doff put it:

“People just won’t believe that he’s not Andy Hardy any more. Here’s a man who has done tremendous things over the years, yet he’s never been acknowledged by his own profession.”

And that’s why Andy Hardy had to declare bankruptcy.

However Mickey’s prospects for the future are by no means as grim as this drastic action might indicate. He recently played a leading role in the forthcoming film “Requiem for a Heavyweight.” He is under contract for a good part in another film, “Mad, Mad, Mad World” He recently was offered $50,000 by a national magazine for first serial rights to his biography, and he turned down the offer, preferring to hold out for more money.

“His future is as bright as ever,” declares Red Doff. “This guy will always be in demand by the public, whether the trade likes him or not.”

Moreover Mickey doesn’t have to worry about a penniless old age. A long time ago he set aside a $250,- 000 trust fund out of the fees he received for the “Andy Hardy” series. Of course he can’t start drawing on that until he reaches the age of 65, but he should be able to live in comfort after that. Providing, of course, he doesn’t get tangled up in more alimony commitments meanwhile.

There’s one thing even his worst enemy has to say in favor of Mickey Rooney: he may be brash, he m. be conceited and he may be loud, but he is endowed with plenty of guts, bulldog tenacity and mere heart than the MGM lion.

‘That kid will hang on with his teeth if he has to,” the late John Barrymore once observed, referring to young Rooney.