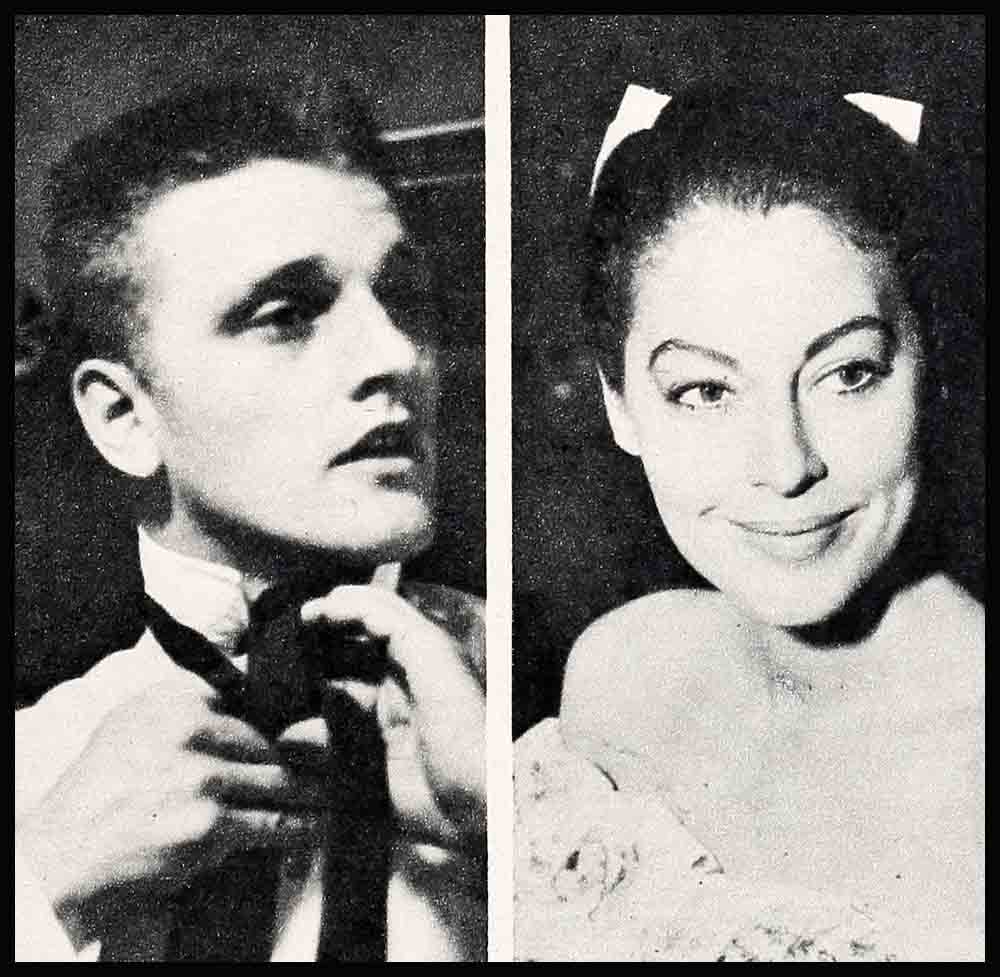 Did Ava Gardner Strike Out With Roger Maris?

To baseball fans—and who wasn’t one, those suspenseful weeks when Roger Maris was inching up to the immortal Babe Ruth’s home-run record?—the columnist’s item packed a wallop as lethal as Maris’ own bat.

The following afternoon another columnist in another paper threw a sneak, follow-up punch. “The word’s around : ‘Ava’s switched from bullfighters to baseball players,’ ” he wrote.

By the end of the week, in gossip columns, barroom conversation and locker-room scuttlebutt, the word was definite: Ava Gardner and Roger Maris were a hot item.

That Ava Gardner had turned to Roger Maris—this anyone could believe. Roger was handsome, a superb athlete, on his way to becoming a super-hero. And of course there was the unpredictable, madcap personality of Ava herself. Ever since she’d returned to the United States from long exile overseas, she’d whirled around New York, from place to place and man to man, in a frantic search for excitement and thrills.

The columnists couldn’t keep up with her—her moods and men changed too swiftly. . . . She showed up at the Chateau-Madrid with Tony Pastor’s son Guy. She stormed out when flamenco dancer Raoul started snapping pictures. She was persuaded to return only when assured he was shooting the show, not her. Later, in a sentimental mood, she decided to go home with Guy, his brother Tony, Jr. and their manager, Gene La Brie, to visit their father—an old friend from the days she was married to Artie Shaw. She also dragged along a flamenco guitarist to provide mood music for the reunion. . . . She went to Count Basie’s opening at Birdland and laughed until there were tears in her eyes when Jerry Lewis borrowed the baton and led the band. During the following week she returned to hear Basie four more times. . . . She dropped into the Chateau-Madrid another night—this time with four escorts in her wake. She danced the pachanga with bandleader Pupi Campo. As they lost themselves in the dance, the other couples left the floor to watch them in amazement.

She showed up at Jilly’s with a bunch of unidentified men—at closing time. But she persisted, she wanted to dance. “I’m Ava Gardner,” she said. “I’ve brought along my own piano player.” Kindly but firmly, she was refused admission. She swirled off into the night with her entourage.

She brought four—some say five—men to a party given by fashion photographer Bill Helburn. One of her escorts stood on his head in the middle of the floor to amuse her, but she was only bored.

One afternoon she actually got up early enough to go out to Freedomland (the East Coast’s answer to Disneyland). She was like a kid—went on all the rides, stuffed herself on hot dogs and popcorn and cotton candy, vowed she’d come back again soon. . . . Late that night, in a complete change of mood, she sat in the Absinthe House eating a sirloin steak. She poured her own special sauce on the meat—heated champagne we were told.

There was Walter Chiari. Walter, in Ne w York to do the lead in a play, “The Gay Life,” firmly declared, “Our romance absolutely since three years is finished. I respect her because she is the first victim of her temperament. She is the one who, when she hurts someone, she first hurts herself. Every man who has been with Ava has gone on to a better way of life. The men, when they leave Ava, don’t feel a torch, they don’t leave bitter souvenirs. But when she hears of somebody taking a step toward happiness, I think she takes a step toward distrusting life.”

Brave words. Wise, understanding words. But they were uttered before Ava phoned him. Once he heard her voice, the whole thing started again. Dancing at Basin Street East with Ava — Debbie Reynolds and Harry Karl were there, too; holding hands with Ava at the Copacabana and sighing together as Adam Wade sang “Rudy”; doing the Stork Club once again and making a point of signing his name and her name to every request for autographs; spinning all over the city, uptown and downtown and midtown, as if nothing had ever changed.

There was Frankie— Frank Sinatra, her ex-husband. She phoned him and he wasn’t there. He returned her call but she wasn’t in. Finally, after a few more attempts, they got together.

Watching Frankie and Ava, you had to, fall back on all the old cliches, especially, “An old flame never dies.” What if they did show up at one place together and later go off separately, each with someone else? That was also like old times. But while they were together, the sparks lit up the room.

That Ava Gardner—lovely Ava, lonely in a crowd, lively with a desperate liveliness that was heartbreaking to see, even as it broke others’ hearts—that she would turn to Roger Maris was understandable. But that Roger would turn to Ava—that was difficult to accept.

For one thing, he was happily married to his high-school sweetheart, Patricia Carvell. and they had four children—Susan, 4; Roger, Jr., 2 1/2; Kevin, 1; and newborn Randy, whom he adored.

With the entire country caught up in the drama of his battle to break Babe Ruth’s record, his own feelings. as relayed to reporters, were simple and direct: “I’m sick of all this,” he said. “I wish I were home with my wife and kids. I can’t wait for the season to end.”

For another thing, he hated the limelight and resented fame. The Kansas City Star printed his home address, and people from miles around flocked to his home in Raytown, Missouri, to gape at his wife and kids. “I guess I’ll have to get out of there, too,” Roger said. “I’m looking for some property out in the country, about twenty miles or so, and I’m going to buy there and build.”

Most important of all, he just didn’t believe in fooling around with other women. Once a writer had asked him, “Do you play around on the road?”

“I’m a married man myself,” the reporter replied, “but I play around on the road.”

Gossip columns were something he never read. His reading began and ended on the sports pages. Night clubs were places he hated. “I can’t afford a hangover,” he said, “and anyhow I don’t like that kind of life.”

Even testimonial dinners frightened him. “I have a lot of bids to dinners and the like, for pay,” he declared. “but speechifying scares me to death, and I don’t like the menus at those affairs. Sure I like money, but I want to get closer to my family—and I don t care to get myself out of condition for the 1962 season.”

A home-loving, clean-living young man, this Roger Maris. His notion of an exciting evening was to sit by the TV set, drinking a bottle of beer and watching the old movies, especially the Westerns. When the Yankees went on the road he didn’t even leave his hotel to go sightseeing. Night clubs and bright lights just didn’t interest him.

“I was in a museum once in Chicago.” he admits, “because my wife and Cerv’s (his teammate) were there from K.C., and we didn’t want to hang around the room all day. They had a lot of old pictures there.”

The country boy, Roger Maris, and the sophisticated woman of the world, Ava Gardner—a most unlikely couple, yet people remembered that Joe DiMaggio and Marilyn Monroe had been unlikely, too. So the rumors and the column items mushroomed, all springing from that first seed of scandal planted by a Broadway columnist: “Baseball fan Ava Gardner went incognito to Yankee Stadium, met Roger Maris and had dinner with him.”

What really happened that Sunday night when Roger and Ava were seen in a New York restaurant together?

He ate slowly and talked quietly to his dinner companion. As he spoke, his thin lips curled up towards his nose, surprisingly like a Cupid’s bow on his severe, steely-featured face.

He started with a shrimp cocktail. Then he attacked a steak (medium rare), a baked potato and a tossed salad with French dressing. For dessert he had a hunk of cheesecake. He drank two cups of coffee and smoked three cigarettes. He was happy and relaxed. He laughed a lot, not just with his mouth but with his eyes, too, and his cold-green eyes warmed.

His companion also laughed a lot. They talked of sports, of food, of the pressures of being constantly in the public eye. They spoke from experience because they had so much in common. After all, they were in the same business.

For contrary to what a gossip columnist was to report the next day, Roger Maris’ companion that Sunday evening was his teammate and roommate, Bob Cerv.

Oh, yes, Ava Gardner and her escort for the evening were also in the restaurant. And at one point Ava and her date walked over to Roger’s table. Just as celebrities and taxi-drivers and bellboys and bankers had been doing for more than a month, she wished Roger luck in his assault on Ruth’s record.

Roger and Bob scrambled to their feet, Roger shook Ava’s hand and thanked her. And that was all. Roger Maris never saw Ava Gardner again. He had never seen her before, except in the movies.

In the fourth inning of the final game of the season, Roger Maris strode to the plate.

Tracy Stallard, the Red Sox’s young righthander, threw the first pitch. High and outside. Ball one. The next pitch whizzed in. Low and inside. Ball two.

The clock on the scoreboard read 2:43 when the next ball zipped towards the plate. Waist high. A fast ball. A little wide.

The day of days

In the Yankee Stadium 23,154 fans went wild. Roger Maris had done the impossible. He’d broken Ruth’s record. He’d knocked out sixty-one home runs, more than any other man in any other baseball season.

Waiting for Roger outside the stadium after the game, was his wife Pat. She threw her arms around him and they kissed. Her “bubble” hairdo was messed (“I like to wear my hair simple—not wild and crazy,” she’d said.), but she didn’t care. Secure in her husband’s arms, she laughed happily—and then she cried a little. Together they walked toward a waiting taxi.

Just about this time the “other woman” was flying back to Europe. Twice she had made reservations for the flight and twice she had postponed her departure. Now she was on the plane and headed for the Continent.

Ahead, through the window, she could see wonderful cloud formations, beautiful figures and clusters in the sky. The plane flew towards them, faster, faster, but each beautiful promise dissolved into nothingness as the plane sliced through the clouds, the promise of beauty. Then, nothing.

Ava Gardner was flying high, moving fast—again on her way from nowhere to nowhere. For all the whispering of the scandal-mongers, the “scoops” of the gossip columnists, the shouts of the bleacher-ites, she hadn’t struck out with Roger Maris.

She’d never even been to bat!

Ava stars in Paramount’s “The Jackals.”

It is a quote. PHOTOPLAY MAGAZINE JANUARY 1962