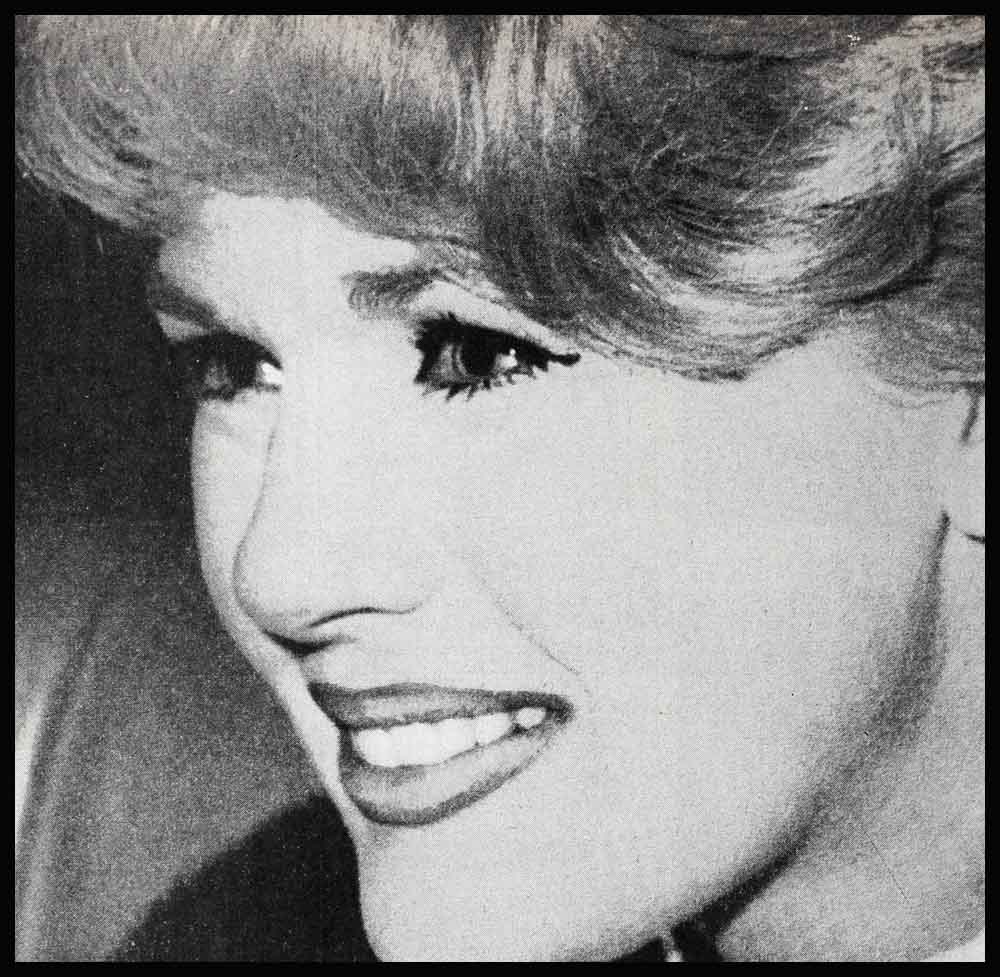 Connie And Glenn To Marry—If…

Two hours before Glenn Ford’s plane took off for the Washington, D. C., premiere of “The Four Horsemen of the Apocalypse” his phone rang.

“Glenn, I’m coming with you!” said Connie Stevens. “Hey, great. I’ll get another ticket. We can fly out tomorrow morning, that’ll give you more time.”

“I’ll be ready in one hour,” Connie said. “We can go tonight, just as you planned.”

For a moment he thought she was kidding. Connie travels with a dozen suitcases, he’s never seen her wear the same dress twice. How could she pack in an hour?

But she did. She was all packed and all smiles when he picked her up at her hilltop home and headed for the airport just outside Los Angeles.

Glenn had asked her to go with him to Washington weeks before, just as he’s asked her to dinner almost every night since they met . . . and to dance . . . and to parties . . . and to Paris for the premiere of “The Four Horsemen.” To that she’d said, “When do we leave?” without a moment’s hesitation.

The whole interlude had been a joyous, spontaneous whirl, exhilarating to them both. Glenn was no longer the quiet stay-at-home. He’d changed. He goes everywhere. He takes Connie everywhere. He’s excited, delighted, because—after months of searching—he’s found someone who lives the way he’s really always wanted to live: on the spur of the moment, gaily, freely. Connie has helped him break loose from his conservatism. And he’s so proud of her he wants the whole world to know, to see, to share his rapture.

Glenn is a romantic, Connie is young and starry-eyed and together they’re enjoying the full flavor of love. They’re experiencing the wonderful momentum that builds when you discover a new human being, when you begin to see and feel another’s thoughts, when you discover a million interests in common and you’re both in love with life.

It’s true that Glenn has known plenty of beautiful women in his life—but none quite like Connie. “I had a good-sized ego and I’m hardly naive,” he’s said, “and yet along comes this little blond statue (in Paris they call Connie La Statue d’Or, The Golden Statue) and knocks me for a loop! She’s a tiger,” he laughs, the one girl he’s ever known who has true spirit, inexhaustible verve and the spunk to say exactly what she thinks and what she means. She’s honest, direct and the first girl he’s ever known whom he could put on a pedestal, without fearing she’d fail off. And usually, wherever the action is, Connie is.

She hates this kind of publicity for Glenn. “He’s above that,” she says. “I hate it for his sake and I hate it for my sake. I kid you not! Ever since I’ve known Glenn my telephone keeps up a steady ringing from columnists who want to know the truth. How can I tell them what I don’t know myself? I’m free. I love life. I live it to the fullest. I have a moral code and I live by it. I’m perfectly honest with Glenn and we get along beautifully. Glenn is a wonderful person. He’s shown me a whole new world, and I’m having a ball with him. I don’t just date, you know, I make friends and I keep right on seeing my friends! The moment I’m ever really in love, the object of that love will be the first to know it.”

Glenn is a strong man, a sure man, a mature man. He’s forty-five or -six to Connie’s twenty-three—and she loves this. The one rich, secure relationship of her life has been with her father—who is just about Glenn’s age.

Their tremendous attraction is their alikeness. They both want to live life to the hilt; they both want happiness, they love laughter, they crave freedom as a way of life. That’s what made their Paris adventure so precious—they felt like astronauts conquering the universe.

When they returned to Hollywood from Paris, Connie became ill. She’d picked up a virus in New York where she’d made thirty-seven personal appearances for “Susan Slade” in something like three days. She loved it though—especially being in the Madison Theater in Brooklyn, where she used to see movies as a kid and dream a dream that came true. Later, she visited old Brooklyn friends and they had a ball reminiscing and crying. It was fun, but it was hard work—it lowered her resistance and the virus set in. It recurred in Paris and almost kept her from going to the “Four Horsemen” premiere. Even though a doctor and a nurse hovered around her all day, the night of the premiere she got out of bed and went with Glenn. Virus or no virus, she wouldn’t have missed it for the world. Then, back in Los Angeles, it showed up again, and she was confined to a Glendale hospital for a few days. Then, Connie got into a hassle with her studio and suspension rumors began. There were many reported reasons for the suspension—some said Connie wanted bigger and better roles in “Hawaiian Eye.” Some said she hit the roof when she’d discovered Dot Provine had been cast in two episodes of the series. A third rumor had a newcomer, Kathy Bennett, replacing Connie completely. But whatever the reason for the feud with the studio, it has all been settled and Connie is happily playing Cricket again.

Whether it is her job or her love life, Connie Stevens fights for what she wants. She fights openly and honestly. And so does Glenn. They’ve never tried to mislead each other or the public. Connie has shown Glenn that she has faith in him. And, in return, Glenn trusts her completely. She’s shown so much concern for him, she’s tried so hard to protect him from the rash of publicity which follows them everywhere.

It was this very publicity which she has come to dread so, that nearly kept her from accompanying Glenn to Washington.

She hated the feeling of being pressured into something. She felt that whatever happened between them should happen naturally and happily and not because of pressure from outside forces.

But suddenly, two hours before his plane took off, none of that mattered. Only the heart mattered. Connie wanted to be with Glenn—so she went. “And she took the place by storm,” boasted Glenn. He can’t stop talking about her charms, about how everyone loves her wherever she goes. And everyone who sees them together comments on how he smiles with Connie on his arm—as he hasn’t smiled for years.

And Connie, too, looks happier than ever. Her relationship with Glenn has changed her. Her father knows it, her brother knows it, everyone close to her has noticed it.

This idyll is the first real challenge to her womanhood, and she’s growing up to meet it. She’s making mature decisions, she’s probing her own feelings, and she’s growing to value her relationship with Glenn more and more. She’s found he’s romantic enough to have given her a diamond heart for Valentine’s Day—and mature enough to have earned the friendship and respect of her father.

Connie and Glenn are invited every- where. And publicity or no publicity, they accept some of the invitations. Like the Star-a-Minute Ball for out-of-work newspapermen in Los Angeles. As Glenn said, “Connie received an ovation that was not to be believed.” What Glenn didn’t say—and what columnists duly noted, was that Connie also received a snub from Glenn’s one-time best girl Hope Lange. But it didn’t bother Connie. Not now.

Those close to Connie know that she’s on the brink of a decision—a very important decision: Whether or not she should marry Glenn. She is a Catholic, remember—she wants to marry only once. Her mother and father were divorced, and she doesn’t want to live through a divorce again. And so she is taking time to decide about marriage. In the meantime, she’s deciding if this romance is a girlish infatuation or if this romance is mature love. Only she can make the decision. Only she will decide whether she will become Mrs. Glenn Ford.

Glenn. of course, has given her time to think. He’s off to Paris to make “The Grand Duke and Mr. Pimm” with, of all people, Hope Lange. This is a picture he signed for a year ago when he and Hope were a romance. There’s no way in the world to get out of the film—and he’s reportedly tried. But the separation will be good for both of them. Glenn knows his mind, he knows he wants to marry Connie. There are no ifs, ands or buts as far as he’s concerned. But for Connie there are. The decision is all hers—and she’ll decide carefully—very carefully. It’s the most important decision of her life.