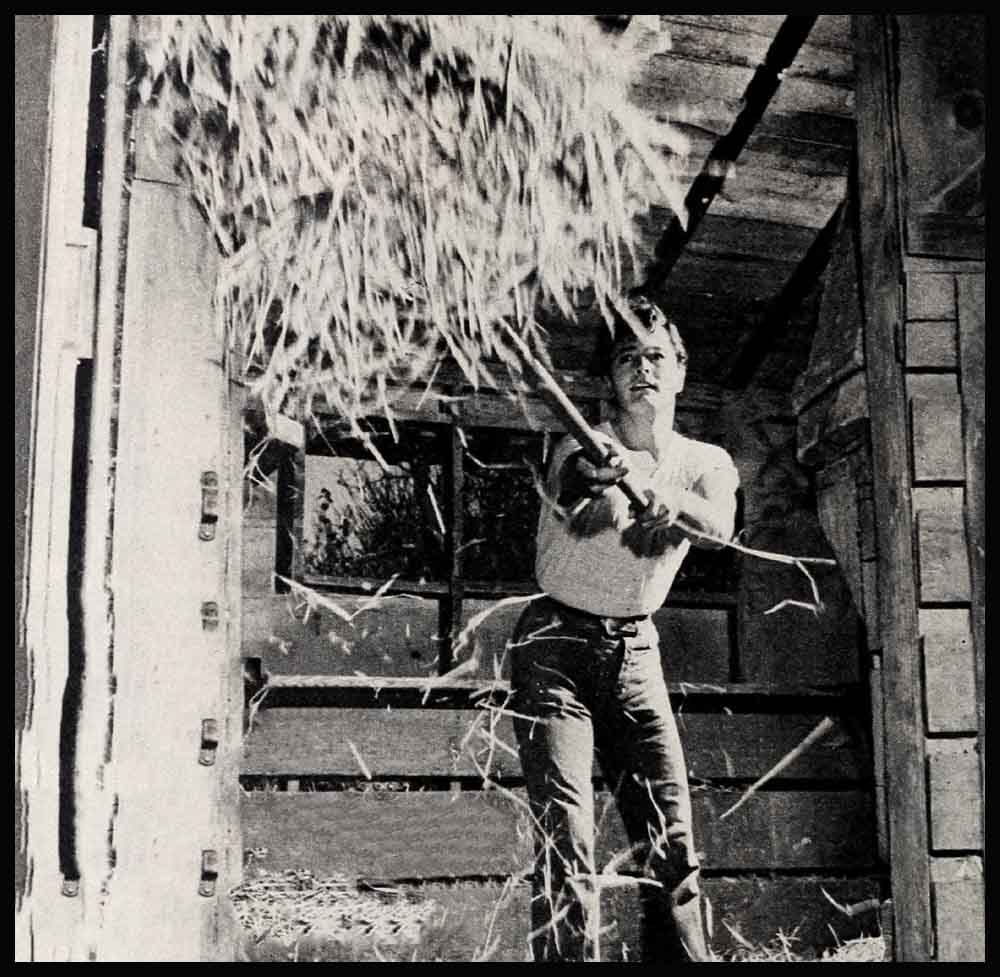 John Derek’s face is his fortune, it’s been said. But John doesn’t go along with this. His face, he’ll tell you, has often been a drawback. At school, the girls, wary of his looks, were too ready to rate him conceited. And it took many a fist fight to convince the fellows they’d better not continue calling him “Prettyboy.” John admits his appearance helped him get the role of Nick Romano in “Knock on Any Door.” But he knows a guy can be too handsome for his own movie future—when it comes to getting such meaty parts as he knows he can tackle. Only this time he’s using his talents, not his fists. Glamour, says John, is strictly for—his leading ladies.

He grew up in the saddle, broke ponies at a Brentwood polo club and had no thought of an acting career until scout Tom Moore spotted him on a bridle path and . . .

. . . suggested a screen test. But his dad, a former actor, said no. John, absorbed in his job, didn’t care. Another interest, art, filled his free time

But Fate wasn’t finished with John Derek. A year later, another talent scout saw him at a bowling alley, took him to David O. Selznick. This time his dad said yes

He played bits in “Since You Went Away,” “I’ll Be Seeing You.” His studio arranged dates with Shirley Temple, other stars, as publicity build-up for him

Then Uncle Sam called. When John came Home after serving twenty-six months in the Philippines and Japan, he was just another actor looking for a job

When Humphrey Bogart announced plans to produce “Knock on Any Door,” John memorized scenes from the script, badgered everyone to get him a screen test. His persistence paid off

Romance knocked on John’s door when he met Patti Behrs, a Georgian princess, at 20th Century-Fox’s 52 drama class. They dated steadily, married in ’48

Patti’s the kind of girl a guy can argue things out with. John calls her his severest critic, says she keeps him from getting a swelled head. Her French cooking is an added attraction

. . . star of “Saturday’s Hero,” left, to swashbuckler (above) of “Mask of the Avenger.” With Jody Lawrence

The Dereks live in little house in Hollywoodland. Thanks to Patti’s thrift they’ll soon be able to buy a ranch in The Valley—where year-old Russell Andre can, like John, grow up in the saddle