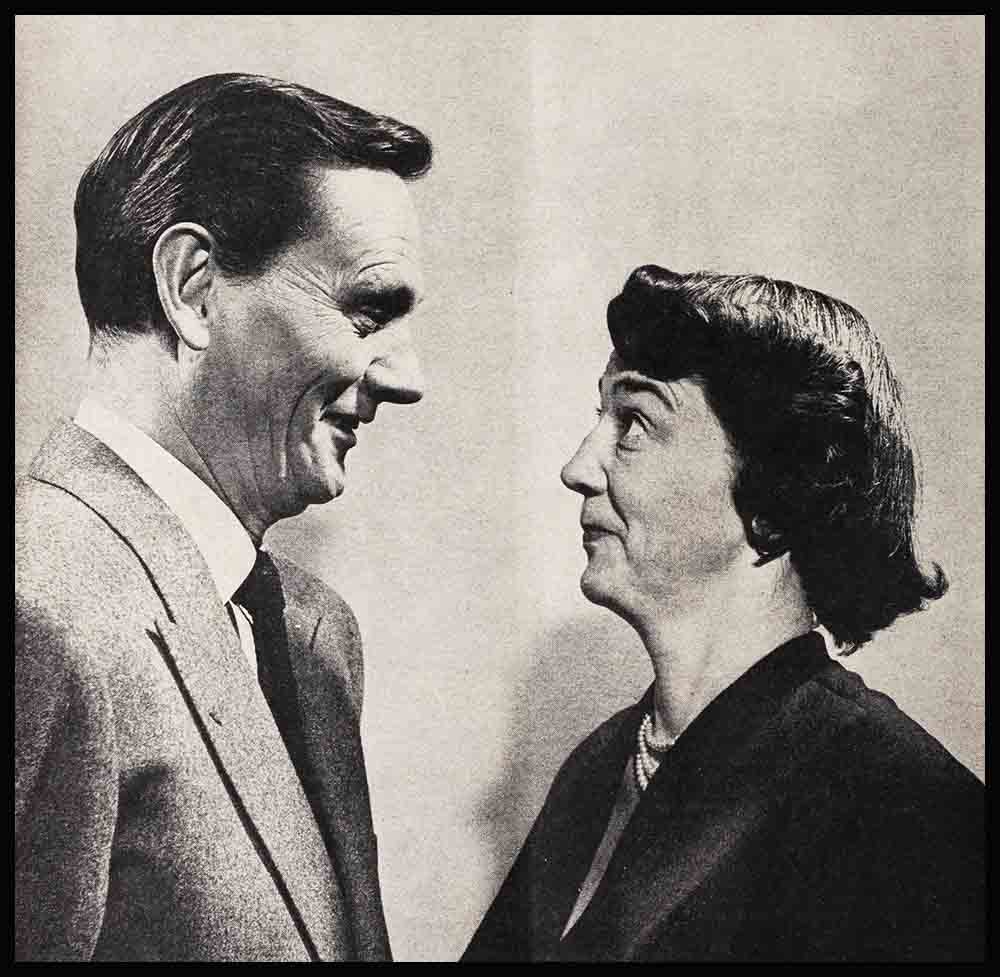 Their Marriage Is A Laugh

The audience had thrown itself wholeheartedly into the mood of the old-fashioned melodrama, “The Drunkard.” It wept with the heroine, jeered at the villain, and cheered the hero on to deeds of derring-do. At the moment, the action onstage was whipping itself into a wild climax. And the audience was silent and tense. Suddenly, cutting through the heavy expectancy with the sure efficiency of a meat cleaver, came a loud and uncontrollable laugh. From one of the actors! The rest of the cast hesitated briefly—then picked up their lines and went on with the show.

Wendell Corey, playing the stalwart hero, guffawed uncontrollably, carrying the audience along with him in a wild burst of meaningless laughter. He made an undramatic—and unscheduled—exit into the wings. And while the other members of the touring stock company tried pathetically to weld the broken pieces of “The Drunkard” back into a play, he sat backstage trying to figure out what had hit him.

Long afterwards, he found the answer: He had, at that wild hysterical moment, fallen in love.

But when he tried to explain his unprofessional breakup after the final curtain that night, all he could do was point apologetically at Alice Wiley, the young actress who was playing his half-wit sister, and say, “I’m sorry. But I couldn’t help myself. Alice has the funniest face I ever saw.”

Hard to believe that a phrase as unflattering as that could lead to a romance that has gone on uninterrupted for more than thirteen years. Hardly the tender words of wooing that most girls yearn for.

And at the time, dark-eyed, dark-haired Alice Wiley was anything but favorably impressed. She supplied Wendell with a large and very sharp carpenter’s nail, which he kept in his pocket for the rest of the run of “The Drunkard.” Every time he was tempted to let loose again, he jabbed himself with it—good and hard. And it worked!

It was a sense of guilt at first—he wanted to try to make amends for his insulting behavior—that prompted Wendell to ask Alice if she’d go out and have a bite with him one night after the show. But by the time he had repeated the invitation after a dozen or so performances in a dozen or so different towns, they both knew that apologies had nothing at all to do with why they liked being together.

Looking back on the beginnings of their romance now, Wendell says, “It started on a loud guffaw—and it built up happily over a thousand mutual chuckles.”

For while other actors in the stock company grew bored and unhappy trouping through a lot of New England’s less enchanting villages, Wendell and Alice found all the towns endlessly amusing, absorbing and filled with delightful surprise.

This is a quality that neither of them has lost—they share a sense of discovery as acutely developed as their joint sense of fun. Even now, every time they get into a new city, they put on walking shoes, buy a local map, and start to prowl.

When Wendell was playing the lead opposite Margaret Sullavan in the London production of “Voice of the Turtle” several years ago, he and Alice, they swear, explored at least 3,000 of London’s 6,000 miles of meandering streets. They found out the philosophy of life of countless Bobbies and flower girls, made friends with some down-to-earth East End barrow men and some very fashionable West End mâitres de hotel—all of whom strengthened their own conviction that there is more in life to be amused by than to despair over.

But things have not always been simple and entertaining for Alice and Wendell Corey.

When they decided to storm New York after the stock tour during which they met and married, they found out what so many aspiring young Thespians learn the hard way-—that the big city can have a heart as hard as a rock. Wendell, whose family had hoped he’d follow in his father’s footsteps and be a minister, and Alice, who had graduated from college the year before with honors—cum laude—settled into a cold-water flat in “Hell’s Kitchen.” Before long, they could have written a book called “A Thousand and One Ways to Stretch the Dollar.”

Jobs of any kind were hard to get. Jobs on the stage were impossible! Alice wound up working as an usher in a Broadway legitimate theatre, and in order to get and keep the job, she had to lie—and say that she was single! That was as close as either of them got to the footlights for some years.

While Alice held down the domestic fort by waving a flashlight about in the second balcony, Wendell made the routine rounds of theatrical agents, tried to badger and beg his way into parts. But nothing came of it. All he was able to talk himself into were some rather weird assignments as a “blind checker.” He would stand outside the entrance to an establishment that wanted to count the number of people who passed its doors as compared to the number who walked inside. “Why they cared,” he chuckles now, “I never could find out. All I know is that I must have been just about as inconspicuous as the Statue of Liberty,” and he gestures toward his rangy six-feet-two figure.

Anyway, come rain or snow and whatever else it is that the postman survives, he’d click his little automatic counter while his thumb got number and number, his spirits fell lower and lower, and despair began to cloud his usually bright blue eyes.

The Coreys managed to eat on two dollars and fifty cents a week, until one day they came up with a share-the-wealth notion that spread their food allowance a little farther, and, at the same time, helped out a half dozen actor pals who were in similar straits. Every night, before Alice went off to her ushering chores, she’d cook dinner for eight, and the “guests” paid fifteen cents each for the meal.

“And it was darned good food, too,” Wendell brags now. “Solid stuff like pork chops. We weren’t settling for any substitutes.”

The break in the Corey luck came in the most unlikely manner. One afternoon, Wendell looked in at the lobby of a New York hotel, where unemployed actors gather to give each other the latest news on the parts they almost but not quite get. One of his pals was slumped down in a chair studying a horoscope magazine.

“Wendell, my boy,” he greeted him with a lethargic nod, “you’re the very man this little book is talking about. It says here that if you were born on the twentieth of March—which you were—today’s the day you’re going to get a job!”

Wendell laughed. But as he walked out into the turbulence of Broadway a little later, he found that he couldn’t put the idea of “Today’s the day” out of his mind. He knew that there was casting going on that very afternoon at the Jolson Theatre—for “Comes the Revelation,” the play about Joe Davis, the imaginary leader of a Mormon colony. Wendell went over, read, and the next thing he knew, he was Joe Davis. The play had a short and not too happy life, but Wendell received enthusiastic notices.

For six months after “Comes the Revelation” closed, he and Alice read horoscope magazines religiously—but there was no second miracle.

After a series of short-run roles in flops, Wendell turned up as the cynical newspaperman opposite Betty Field in the Broadway hit, “Dream Girl.” And from there it was a quick and easy jump to Hollywood and his first movie role in “Desert Fury.” Since then, he’s racked up some twenty screen performances, the most recent of which is a drunk and dissolute character in “Jamaica,” with Arlene Dahl and Ray Milland as co-stars.

Along about the time Wendell was playing the Mormon from Utah, Alice switched from ushering to a job as general factotum—selling, bookkeeping, even helping to make the stuff—in a small jewelry firm. She had turned down a role in a Broadway show to take the job, which was as tough a decision as she ever had to make. But she wanted to play it safe and keep the family eating until Wendell cracked the big time, full time, which she was positive he could do.

“It sounds kind of corny to say it,” Wendell smiles, and his face lights up, “but if it hadn’t been for Alice supporting me all those years, I could never have gotten anywhere in this business.”

The Coreys now are settled in a simple house in Hollywood with their four youngsters, living the kind of undistinguished suburban life which Wendell describes as “Scarsdale on the West Coast.”

They are definitely not on the glamour beat. “Our life,” he says, “is real small-town stuff. The Macdonald Careys live just a little down the road from us. And the Richard Whorfs are in the neighborhood, too. So we visit back and forth, and talk about our kids, and talk shop.”

When the Coreys are not talking shop in Hollywood, they’re likely to be buzzing across country to settle temporarily into the small and definitely unfashionable apartment they’ve rented in New York. “It’s on the wrong side of town,” Wendell reports, “anything but chic. But we can remember the days when if we had as much as sixty dollars in the bank, we felt like millionaires. We can’t see the point of putting ourselves in hock for a place that we use maybe a couple of times a year—only when we come to New York for me to do a TV show or something.”

Alice’s acting career is temporarily at a halt. She’s waiting until their children—the youngest is a little under a year and the oldest is eight—are grown up enough to get along without her at home full time.

“And when she does go back,” Wendell says, “she’ll be terrific.”

As far as her “funny face” is concerned, he hasn’t changed his mind since that first uproarious night. “It still breaks me up every once in a while. I look at her and I laugh. But I wouldn’t want her to look any different. No slicked up glamour dolls for me!” And when he tries to describe that face, he can’t do it. “How,” he wants to know, “can you possibly describe half of yourself?”

Wendell Corey has some very definite theories on what women should and should not be. Alice fits the ticket on the former to a T. And as for the latter, well—there’s a story that has to do with an insect and his young son, Jonathan.

One day Jonathan was out on the terrace in their Hollywood home when he saw a strange elongated green bug.

It was a praying mantis, and Wendell told Jonny all about the creature—how it gets its name because its front legs are folded as though it were saying its prayers; how you can make a pet of it, stroke it; how it will eat out of your hand. And then he told him the most important thing of all: that the praying mantis eats her own husband.

“And let that,” he said, “be a warning to you. There are a lot of women in this world just like that. Sweet and affectionate and interesting to look at. But they’d just as soon swallow a man whole as look at him. When you get around to getting yourself a wife, Jonny, avoid that type. Pick one like your mother—one you can count on and trust. And one who’s always good for a laugh.”