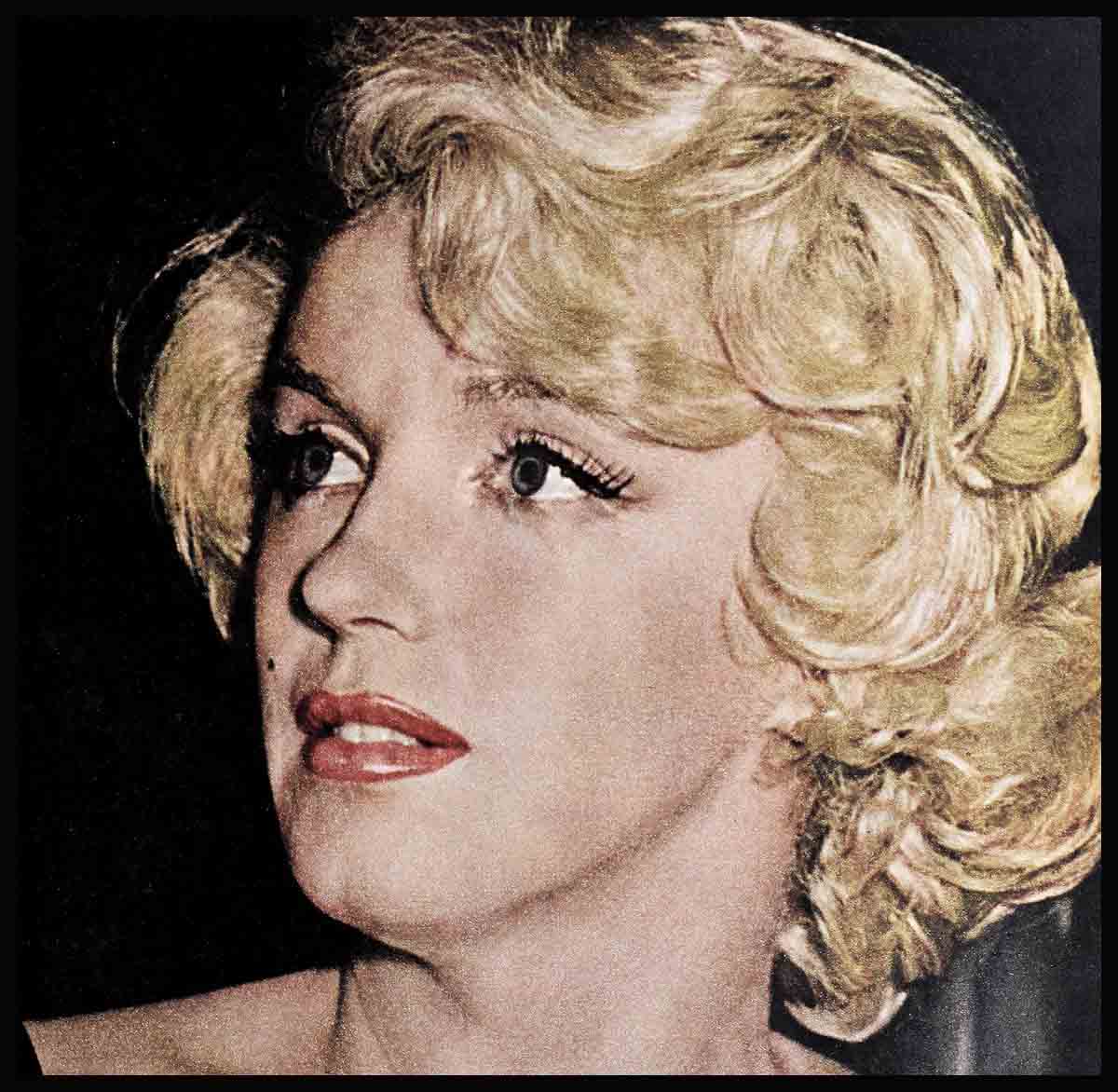 You can see him in a crowd. You can reach out and touch him; because he is a great man, famous, known all over the world, and maybe that touch will give you at least a small part of him. . . . You can see him on television—or even in a movie theater—and you will look up to him and think how lucky his wife is to be married to him and how lucky his children are to have him for a father. And maybe you’ll think, “I wish I were his wife.”. . .You can read about him almost any day in the newspapers and magazines, and you will think, “This is a good person. This is a truly honorable man.”. . . But what you will never read, never see, never know is that this man is a killer. He is the man who killed Marilyn Monroe. . . . When their romance began, nobody—especially Marilyn and the man—could have guessed at the ending. For it began with a kind of love It was the worst time of her life and the best time of his, and so each of them needed someone to share that time with. That was their love, their need, really. It was a kind of love gone wrong. For he is very much happily married. Marilyn, of course, knew that. He had no intention of ever divorcing his wife. She knew that, too. But he had been so on top of the world at that time that he had to have a celebration of his good fortune. His career had reached a height he never before dreamed it would, and there were obviously better, much better things in store for him. And what better celebration than to have the world’s most desirable sex symbol in love with him?

With Marilyn, it was not good fortune but unhappiness that drew her to him. She was getting older, she was afraid she was losing her beauty, she was afraid she’d lose out on her career. Her last pictures had not made the money expected of a Monroe movie—and if she couldn’t make money for the producers, who would hire her. And hadn’t 20th just fired her?

So she went on looking. And not finding, she became more and more desperate. And with her desperation came the endless pills, the drinking, and a dream she’d had before—the dream of ending it all in dying.

And then there was the man.

Maybe he will marry me!

Besides, to her, there was always the faint possibility that be would marry her and they could live happily ever after.

But it was all a dream, and somewhere deep inside her she knew that.

And so they spent time together, as much time as they could manage, in quiet, out of the way places, at her home, in friends’ apartments, once or twice meeting in the same public place and not acknowledging each other.

You must understand that he is an honorable man. Never before had he been anything but devoted to his wife and family. But he had a need for Marilyn and he allowed himself his indulgence. It was to be his fatal flaw.

And, Marilyn, at that time, was too weak to deny her need for him. And so they went on—reaching closer and closer to tragedy—until the man’s conscience began to bother him. Some people knew about their romance, could his wife find out? What would she do—would she leave him? And, if it became public knowledge, what would happen to his work? Would he be besmirched by scandal just when his life’s dream was close to the brink of coming true? He’d better see Marilyn less. He’d better try to stop seeing her altogether.

And the more he tried to stop seeing her, the more desperate Marilyn became. There were the phone calls, the threats, the pills again.

He didn’t believe her, all she did was make him almost hate her.

She spoke to him on the phone.

“Don’t leave me,” she pleaded.

He hung up on her and she tried to lose herself in sleep. Beside her bed there was a bottle of fifty sleep capsules. There, there was her friend, the thing that always gave her peace.

She gulped down a handful.

The phone rang. It was a close friend of hers, a friend who knew all about the romance.

The friend told her, “I’ll come over and talk to you.”

But Marilyn didn’t want anyone to see her the way she looked. Her eyes were swollen and red. She’d let her blonde hair grow out until the dark roots showed. Her face clearly showed the signs of drinking and pills.

But she couldn’t sleep—and next to her was the bottle of pills. If she could sleep, she would feel better. She could dream about her career, her fame. But she had no career. Her studio had fired her. Well, she could dream that somebody loved her. She could forget about her father who never wanted her, her mother who escaped to mental institutions. And she could forget this man who had left her, too. If she could only sleep. And next to her was the bottle of pills.

The bottle. It was empty! There were none left.

She had to get help! She called him.

First, he thought: If this gets out I’m through. I cant get involved in something like this. Then, She’s faking. She’s threatened me before. She’d never really do it.

He told her again he couldn’t get involved—that he was a married man. He hung up.

It all took less than a minute.

The last thing Marilyn heard was the buzzing of the receiver in her hand.

Coroner Theodore J. Curphey, in his official report, noted: “Miss Monroe had often expressed the wish to give up, withdraw, and even to die. On more than one occasion in the past, when disappointed and depressed, she had made suicide attempts by using sedative drugs. On these occasions she had called for help and had been rescued.”

This time she had not been rescued.

It was her housekeeper, Mrs. Eunice Murray, who first sensed that something was wrong. The light in Marilyn’s bedroom was still burning at three that morning. She knocked. There was no answer. She tried the door. It was locked.

She called Marilyn’s psychiatrist. Dr. Ralph Greenson. He hurried over and broke in the window. When he found her, she was dead. The telephone was still buzzing in her hand.

Now it is a year later. Mrs. Murray has disappeared, she’d vanished shortly after Marilyn’s death. Pat Newcombe, Marilyn’s publicity agent, has left the Hollywood scene and is now working in Washington, D.C. Joe DiMaggio, her second husband, has remained faithful to her memory—he has a small bouquet of roses placed on her crypt every week.

He is the man who is living the death she so quickly found.

We have lost her, but so has he.

Wherever he goes, whatever he touches, whomever he sees; he thinks of Marilyn. His guilt never leaves him, his fear has become his friend. For once, long ago, before all this, he was an honorable man. But he had made a fatal mistake. And now he is lost—not to all the world—but to himself.

Some people know who he is. Will they ever reveal it publicly? Does his wife know? Would she tell? And he himself, will his guilt pry his tongue loose?

You can see him in a crowd. You can reach out and touch him. . . . And you will never know that he is the man who killed Marilyn Monroe.

And he is the man who killed himself.