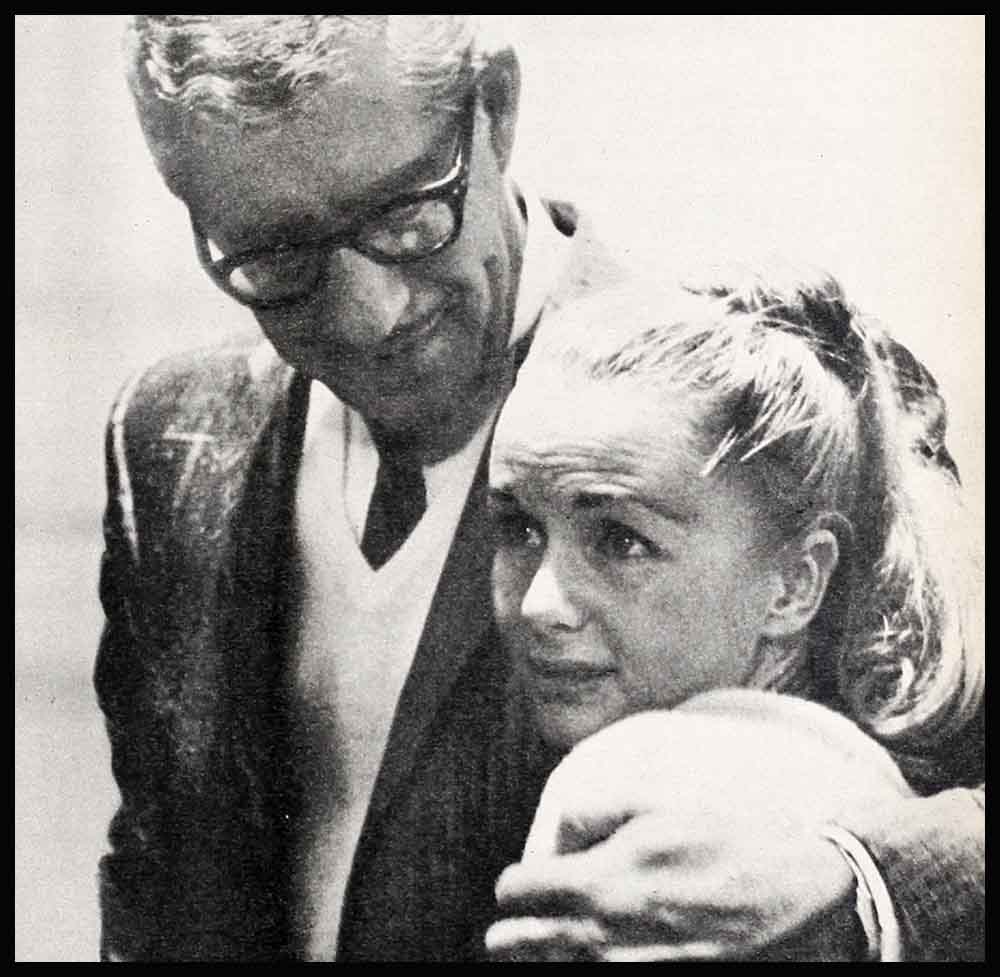 A New Baby For Debbie

There’d been the pregnancy rumors for a couple of months before this. Followed by the usual denials (movie stars, like the President’s wife, seem to have a thing about keeping new-baby news under their, er, hats as long as possible. That’s how it goes.

And then one day in early April, on the set of “Mary, Mary”—just two weeks before completion of the film—Debbie grinned that grin of hers and announced to a few persistent questioners: “All right. It’s true. Harry and I are going to have a baby. I held back the news because I didn’t want any fuss during the picture. I didn’t want anybody to worry about me working so hard. But now—well, I can’t hold it back anymore. And, besides, I’d like to start on some knitting here at the studio—so I might as well ’fess up, huh?”

There’d been lots of smiling around the studio the rest of that day. Debbie’s a very popular girl wherever she works. And the Warner Brothers’ lot was no exception.

In fact, when Harry came by Debbie’s dressing room at about six that night to pick her up, he said. “Why all the pats on the back on my way in?”

And Debbie said: “Oh, because I’m just a big old blabbermouth, I guess—Dad.”

And it all seemed so far from them now —that night only nine months earlier. that stifling hot July night, when Debbie had lost the other baby, her and Harry’s first . . . that night of sweat and uncontrollable weeping and sudden and terrible pain. When the seven-months baby inside Debbie, already dead a week, was removed from her. . . . But that was past now.

The mood was one of joy now.

As we were joyous the next day when we heard the news. Until, quite by chance, later that day, we happened to be talking with an obstetrician-friend of ours. Who asked us—as he always does—“Well, what’s new in Hollywood?” Who frowned suddenly when we said, “Well, of course, Debbie’s pregnant.”

“Do you remember the medical circumstances concerning the loss?” he asked.

“Yes, a miscarriage,” we said, “—the baby was removed by Caesarean section.”

“And she’s expecting the new baby when?” the doctor asked quickly.

He shook his head, and was silent for a long moment.

“It’s not gloom—exactly,” said the doctor. “It’s just that, well, it seems to me she’s taking a chance, a heavy risk, not waiting longer to become pregnant again than she has. . . .”

“When the unborn child—or the fetus—is in its seventh month, and something goes wrong, the child must nearly always be removed from the mother by surgery. By ‘Caesarean,’ as it is commonly called. And this is where the danger begins. Danger not in the operation itself. But, rather, in the after-effects.

“You see, in performing a Caesarean, what we actually do is to open the uterus and remove the fetus. Now, the uterus is extremely sensitive, as you can imagine. And tampering with its tissue is very hard on that tissue. And it takes time, lots of time, for new tissue to grow and replace the old.

“This, then, is why I say there’s a danger in having a child soon after a removal by Caesarean section. Because, in some cases, the new tissue is not able to endure the pressure of a second pregnancy if that pregnancy begins before at least a year after the operation has been performed. At least a year. And a full year! . . .”

We tried, for a while after this talk, to put the doctor’s words out of our head. After all, gloom has its place. But not where a gay and vibrant and ebullient and life-loving young woman like Debbie is concerned.

But we couldn’t. The doctor’s words wouldn’t budge from our mind.

And we found ourselves wondering after a while if Debbie herself were conscious of the risk our doctor had spoken of. And if the thought of that risk frightened her.

Well, it didn’t take us long, knowing Debbie, to figure out the answers to these two questions.

To the first, we decided: Of course she knew.

To the second, we decided: Of course she was not frightened.

A mouse can send a woman scampering up a chair. A spooky movie can send her home trembling. A strange sound in the night can have her reaching pronto for the bedside phone. A hundred and one other scary little things can give her all kinds of jitters.

But there’s no frightening any woman who wants a baby.

And Debbie wants this new child of hers. Wants it desperately. And is prepared to fight for it—with every fiber of her heart, soul, and being—so that it might safely he brought into the world. . . .

It s no secret, for instance, that ever since her marriage to Harry Karl a little over two-and-a-half years ago, Debbie has, very naturally, wanted a child by this man she loves.

There were, however, certain complications back then—complications of a non-physical sort. . . . It wasn’t exactly simple for a woman in Debbie’s position back then, a woman with two children by a previous marriage. The children were very young at the time (Carrie Frances Fisher was not quite four yet; Todd Emanuel Fisher was only two-and-a-half). They had seen one man go from their lives, another man come into their lives. They loved their daddy—Eddie. They loved Harry— or “Hawwy,” as they called him. But they were so young. And Debbie—sensibly—wanted to give them time, at least a year, to get used to this change in their lives; wanted them to feel firmly rooted and secure before they had a new brother or sister.

Later, Debbie told a photoplay reporter that she and Harry had decided they wanted eight children—including her two by Eddie and Harry’s four by two former marriages—“which gives us two to go!

With Debbie, there has always been a feeling of love for children per se, for all children.

Her own. of course—(Richard Gehman once wrote “soon after the breakup with Eddie a friend asked Debbie how she had managed to get through the first few days. Answered Debbie: ‘I shut myself in my room for three days, and in that time I prayed for strength to get through—not so much for my sake as for the sake of the children,’ ”)

And her love for other children, thousands of others—witness her role as founder and two-times president of the Thalians, an organization that raises money for research dealing with mentally-retarded children. (The story is told how Debbie wept the day back in 1956 when she first met some of these youngsters, how she said to a friend: “These poor kids need a new clinic where they can be helped. A place with the finest facilities, the finest doctors. And me—I’m going to try to help them get this place. And get them contributions!”

And. of course, she kept her promise.

Says a good friend of Debbie’s:

“She’s pretty unstoppable, as you know. Or unsinkable—to plug the ‘Molly Brown’ movie she’ll be making in October. Anyway, there isn’t much that Debbie doesn’t set her heart on that she doesn’t get.

“Sure, there’s a medical risk involved. But Debbie’s attitude about this seems to be: When isn’t there a risk—in any pregnancy, or for that matter, in anything in life?

“And, though she’s lost one child, and not too long ago. she isn’t going to let that stop her. Nor, importantly, is she ignoring some of the advice that was given to her after the last time. I mean, when she worked so much, too much I think, while carrying the last baby—going straight from ‘How The West Was Won’ into ‘My Six Loves’—well, this time Debbie had it arranged so that she finished the picture she was working on (‘Mary, Mary’) a good four months before the baby’s due-date. Then, she and Harry took a nice leisurely trip to Europe—with lots of rest, plenty of time to relax—with nothing hurry-hurry about the trip at all, in fact.

“Besides—remember—Debbie comes from hearty Texas stock. I’m sure that in her time Deb’s heard lots of stories about great-great-grandmas who bore children in covered wagons or out in the fields with or without midwives and with Indians about to attack. If her ancestors could do it. so can she.

“And, knowing Debbie, she’d be the first to tell you that she couldn’t be having it easier right now, in this modern day and age of ours.