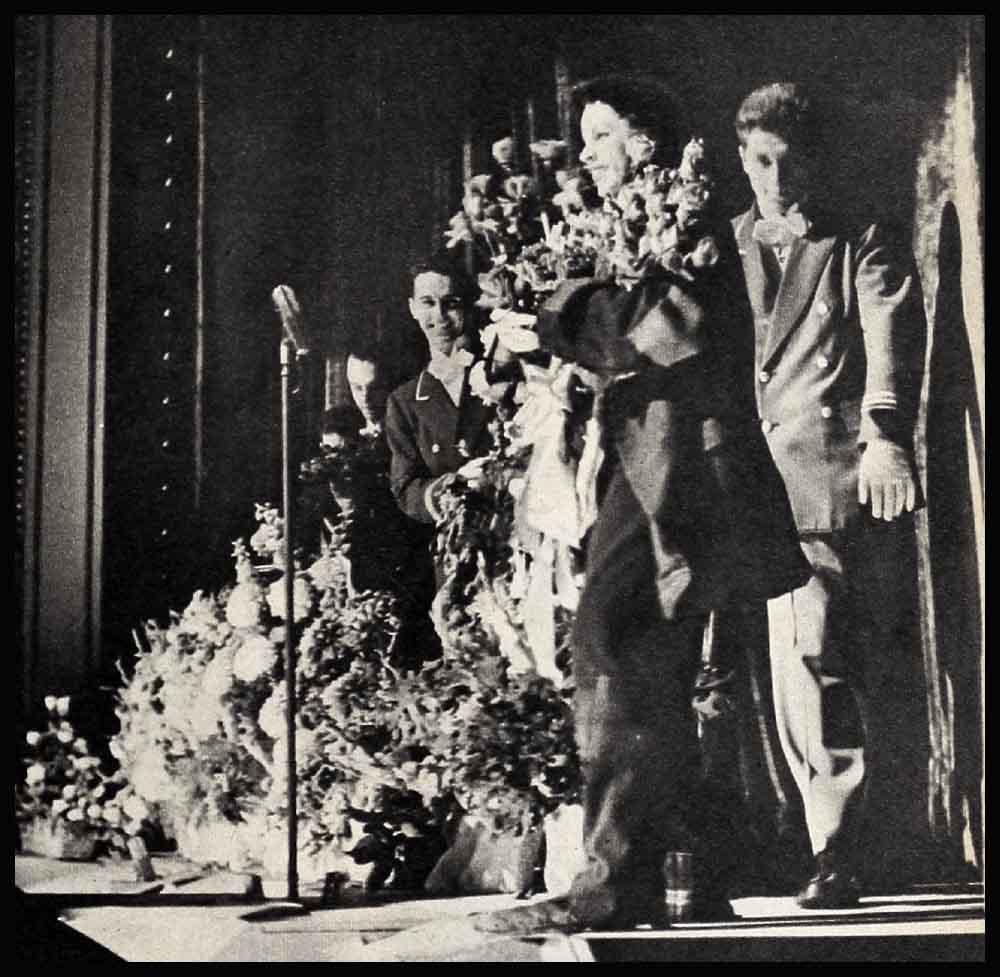 I’ll never forget Judy Garland’s opening at the Palace. Neither will anyone else who was there. A star-studded audience paid a six-dollar top to see her. The theatre was completely renovated for her, hung with priceless paintings and sparkling crystal chandeliers. And a red velvet carpet was spread from the curb in front of the theatre right up to the stage.

On stage came eight young men, billed as “Judy’s Boyfriends,” chanting a little ditty about her. There was a flash of black velvet behind them and the applause grew and grew into an ovation that threatened never to stop. But Judy, stepping to the footlights, shouted the crowd down. Her first number was a medley especially written for this evening—“Until You Play the Palace.” It told about her career. It kidded the newspapermen who, she was sure, were going to report that she needed to lose ninety pounds more. And it waxed sentimental as she paid homage to the great names that had preceded her on that stage, singing their theme songs. Fanny Brice’s “My Man,” Eva Tanguay’s “I Don’t Care,” Sophie Tucker’s “Some of These Days.” Then Judy sang her songs. “You Made Me Love You,” “The Trolley Song,” “For Me and My Gal.” Sometimes she would stop and wipe her brow with an orange hankie that matched her crinoline petticoat. “This isn’t very ladylike, but it’s very necessary,” she would say. Or, going over to the piano for a glass of water, “Gotta have some water,” she’d explain. “You don’t know how hot it is up here.” She’d come to the footlights with the pitcher and glass in her hands. “Anybody want a glass of water?”

This was no personal appearance by a movie star. This was a great trouper giving her all. For, ever since she was little Frances Gumm, barnstorming the country in cheap vaudeville houses, Judy had wanted to “make the Palace.” But long, long before she was a star, the famed theatre had turned into a chain movie house. Now two-a-day was coming back— and she was the trail blazer.

For her second appearance she came on in tights, a shortie jacket and a cocked hat. “Hallelujah,” she shouted, “Come on, Get Happy,” her song from “Summer Stock.”

Another change—this time to the tramp costume for “A Couple of Swells,” her big number from “Easter Parade.”

It was getting late. But the Garland spirit was still soaring. She came back for bow after bow. But everyone knew there was one more song to be sung. Again Judy came to the footlights. She took off her battered hat, sat on the stage apron and sang “Somewhere Over the Rainbow.” When she finished, her eyes were moist and the showfolk in the audience were weeping unashamed. “I’m not good at making speeches,” she faltered. “What can I say except ‘bless you.’ ” The usherettes came down the aisles with flowers from all over the world and, most prized of all, a basket of roses from Judy’s little girl, Liza.

Backstage was a madhouse. Photographers, reporters, friends surged to hug Judy and kiss her and tell her how wonderful she was. “Thank you, thank you,” she repeated again and again. “Are you coming to my party?” she asked. “You must come to the party.” Sid Luft gave a reception for her at the 21 Club. “I’ll probably go straight home and collapse, but you must go to my party.”

At last, breathtaking in a pale blue tulle gown, she was ready tr leave the theatre. “Don’t worry,” a publicity man told her. “We’ll get you out through a side door.”

There were at least 5,000 people waiting. The news of Judy’s triumph had spread I like wildfire. “I’ve been on this beat twenty years,” said a policeman. “I’m telling you I I’ve never seen anything like it.”

She came out arm in arm with Sid Luft, surrounded by four policemen. But there was no disorder. Just the din of thousands of voices shouting, “Judy! Bravo! Bravo! Judy!” You could hear the cheers and applause all the way down Broadway to 42nd Street—drowning out the hum of the busiest street in the world.