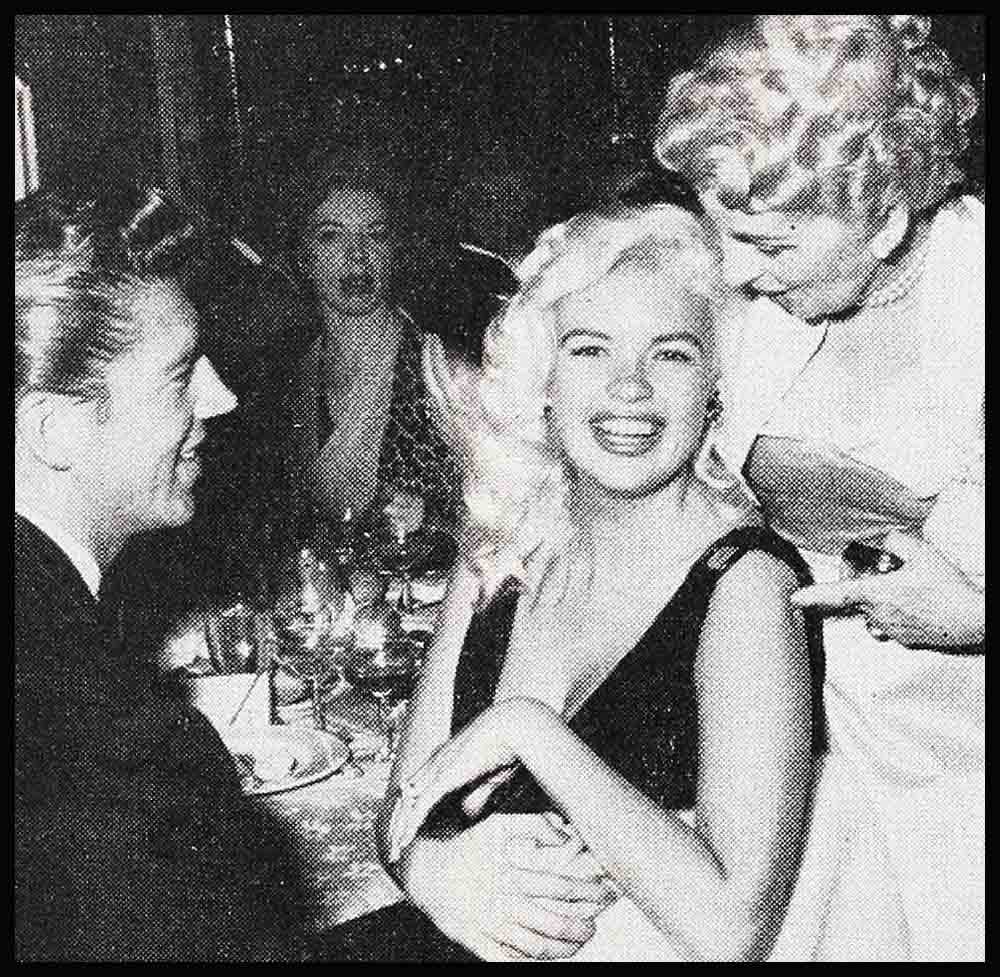 Once over Lightly: Tab Hunter can now stop feeling sorry for himself and cease grousing over his career in print. His “That Kind of Woman.” with Sophia Loren is a top-of-the-ladder role. It’s up to Tab now to stay up there . . . Yul Brynner is the only man I know who suffers from five o’clock shadow on the top of his head . . . Kathy Nolan and Nick Adams have called off their romance. They discovered they gave each other ulcers . . . Flowered wigs are the latest rage in Cinemaville. And think of the money it saves at the hairdressers . . . Pink champagne popped all over the place when Jayne Mansfield announced impending motherhood to her Hollywood friends. In her eight-bedroom, eight-bath mansion. Jayne will have plenty of room for a nursery—all pink, of course, boy or girl . . . John Kerr still receives mail addressed simply. “That Saxy Man. South Pacific,

Hollywood” . . . Ava Gardner and Tony Franciosa now buddy-buddies on “The Naked Maja” set in Rome, and after all that pre-shooting feuding . . . Tony Curtis and Janet Leigh seem more or less to have taken over the “Beverly Hills Rat Pack” group with Janet the “den mother.” What Tony is in that brown foulard jacket and tight. tight trousers. I wouldn’t know.

Strictly inside: Those feud rumors between Sal Mineo and Rafael Campos carried on all through the making of “Tonka” for Walt Disney. Seems the lads didn’t like each other and that was that . . . Friends wish Lana Turner and actor Ken Dibbs would confine their dates lo the living room. This having to slip out back doors of local bistros when Mickey Cohen enters the front. isn’t too good, especially at this crucial period in Lana’s personal life . . . Since he’s been made disc jockey at his Army post. Private Russ Tamblyn couldn’t be happier . . . Did you know that Joanne Woodward will enroll at Columbia University for psychology courses while husband Paul Newman Broadways in “Sweet Bird of Youth” . . . Those friendly meetings between Ingrid Bergman and Rossellini in Paris, despite the annulment snags, have even the sophisticates raising eyebrows . . . Before Tony Perkins returned to Hollywood from his role in “Green Mansions,” M-G-M studios wired his Cape Cod retreat. “Come at once for lessons in guitar playing, horseback riding and swimming. You must be proficient in all three.” Tony wired back, “Am already proficient in all three. See you later.” When Tony finally showed up in Hollywood, the studio discovered be was right. Tony could ride, twang and swim with the best of them . . . The town is holding its breath over Kim Novak’s announcement to the effect that her studio (Columbia) spoiled her romance with Rafael Trujillo, the Dominican General divorcing his wife and six children. Kim further announced to the press that she was now running her personal life and invited reporters to telephone her for news instead of the studio. “The studio publicity department has been messing up my life.” Kim stormed . . . People for tables around thought it a little much when Col. Parker summoned Pat Boone over to his table in the 20th Century-Fox dining room and handed over four Elvis Presley balloons for his girls. But not Pat! Elvis is his girls’ favorite actor, he claims.

Marilyn Cuts a Figure: Marilyn Monroe slithered into a party in honor of songwriter Jimmy McHugh and almost stole the show. In a form-fitting black dress, cut ’way down to there. Marilyn smiled and shied and “little girled” her way around. “Your hair is platinum now,” I said by way of greeting. “Oh no,” she breathed. (Marilyn breathes her words from the depth of her unfettered bosom) “It’s ‘white hot!’ For my picture. ‘Some Like It Hot.’ ”

What is it? The place where the “beat generation” is the topic of discussion at places like the Seawitch. Unicorn and a hundred and one other coffee mills that have become as voguish along the Sunset as the sack dress, chemise haircut, leather jacket, blue jeans and foreign car. A changing Hollywood it is … as changing as its loves, heartbreaks, big deals, zooming careers and falling stars.

No falling star is Jimmie Rodgers. He and his beautiful Colleen bought themselves a new home in Beverly Hills. It’ll be a $250.000 year for JR. Thanks to his records, p.a.’s and MGM’s “Good Girls Get Married.”

Wondering . . . if Will Hulchins’ judo lessons will add that necessary confidence to make him less scared of girls. Hutch’s new hilltop house, painted all blue, could use a little pink and a Mrs. “Sugarfoot” . . . if Earl Holliman whose latest is “The Trap” will get pleasantly “trapped” into a gold ring ceremony before Dolores Hart treks cross-country to Broadway and a play.

Party of the Month

It was the party of the year at Mike Romanoff’s famous restaurant the other night, thrown to celebrate Mike’s recent citizenship. In the bar Frank Sinatra and the Peter Lawfords held forth, with merry songs by Ethel Merman, Judy Garland and Dean Martin upstairs.

Nor did Frankie glance her way when Lauren Bacall made an early departure. Lauren’s sulkiness these days leads friends to believe she’s toting a tall thin torch for the short thin singer who, at the moment, couldn’t care less.

By the way. Frank claims it’s Brigitte Bardot, not he, who will lose weight while making their picture in Paris. Seems the minx has a way of worrying her costars into walking shadows.

I had supper in the Crown Room with Tony Martin and his beautiful wife, Cyd Charisse, whose successful marriage is a gold star achievement.

Louis Jourdan, the current rage after his triumph in “Gigi.” looks younger now, with his clipped haircut, than in years . . . New empire and trapeze styles seemed created solely for attractive expectant mother and Janet Leigh, with her new dark hair and rather heavy makeup, was the epitome of chic in her black smock-like gown. As Janet flitted among the guests the years fell away as I recalled the naive, unsophisticated girl who once told me. “I am so anxious to he able to talk with Hollywood stars about the things they know and talk about. I’ve never seen a play. I don’t know about famous people or anything.” Today, a self-assured, assertive Janet seems to he in the know.

Bing Crosby, without his toupee and not giving a darn, seemed to enjoy himself with his lovely Kathy. Marriage and her motherhood have given Kathy Crosby a new radiance. In her white faille coat, cut full all around, and a white ribbon hand encircling her chignon, she was simply a vision. “She grows prettier all the time.” I told Bing. “Thank you. ma’am.” he said, his eyes lighting up with pleasure. Is he ever happy in t his marriage!

There was no exchange of greeting. I noticed, between Joan Collins and her former boyfriend. Arthur Loew Jr., who arrived quite late with Liz Taylor. In her flame chiffon, Liz looked beautiful. but her eyes spoke of “other times and other places” unforgotten.

Jacques Bergerac and Dorothy Malone danced only with each other. And handsome Greg Peck followed his so-chic French wile. Veronique, everywhere with his eyes. Bill Holden, making one of his rare party appearances, came stag and caused a female traffic jam!

Tommy Sands grows handsomer, what with his hair much shorter, his face leaner and tanned and a new sell-assurance . . . Pat Boone told me about his three-year-old. Lindy, who had only that day come down with measles. The news gave studio execs quite a turn. Three of their biggest singers—Gary Crosby, Tommy Sands, and Pat—had been bouncing Lindy on their knees on a plane trip to Hollywood the day before. But so far, all’s well. “We took the other three girls to the doctor for a measle-catching session.” Pat said. Shirley Boone, so pretty in a black sheath and bright yellow headband over her dark hair. was busy greeting Dinah Shore and George Montgomery, Sue and Alan Ladd, who had just arrived from an eastern location. and pert little Nancy Sinatra, a doll in full white organdy and red slippers. “I’ve had this dress four years.” Nancy confided. “and I expect to wear it another four” . . . Nobody’s displaying surprise over the marital breakup of Mamie Van Doren and her band leader husband, Ray Anthony.

Ricky Nelson bought a horse on the Tucson location of “Rio Bravo” and John Wayne helped him pick it out. “Its name is ‘Tinker Toy.’ ” Ricky told us. “but I didn’t choose the name. It was called that when I bought it.” During our talk Ricky confided he and brother David are buying a ranch together. Instead of college. Ricky will spend his free time overseeing the livestock. Incidentally. Rick’s real unhappy about those engagement rumors. “I’m only eighteen.” he says. “What do they mean engaged? They’re not true never were!”