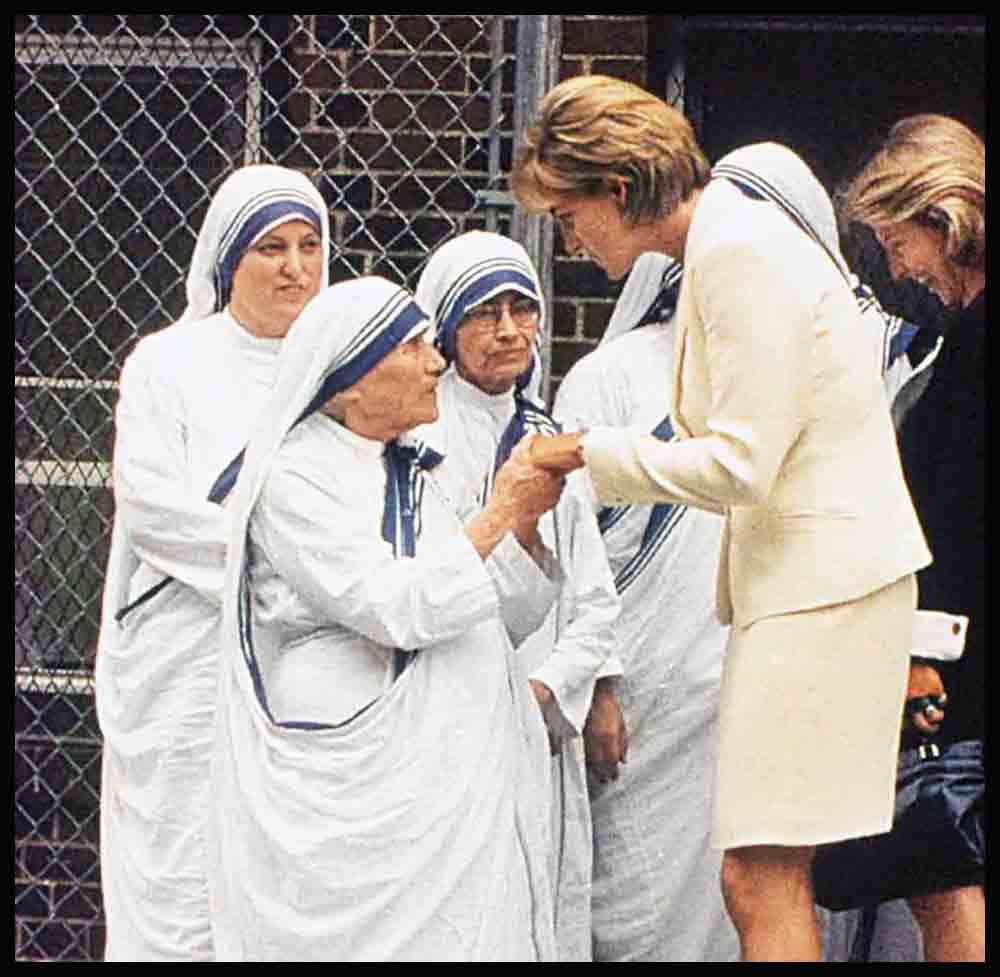 Reaching Out, Racing Away

In what seems an impossible calculus, Diana, no longer in line to be queen, grew even more famous. Only this particular woman could have engineered such a thing, and such a thing could only have been engineered in our modern age—a golden age of celebrity, with tabloid journalism ascendant, juiced not only by hard-charging paparazzi and hard-digging ink-stained wretches, but by an exciting new electronic element. Diana was on Page Six every morning, Inside Edition every evening and, eventually, on the nascent Internet 24/7. For Diana junkies, and they were legion, Diana was omnipresent, omnipotent and, seemingly, omni-fascinating.

A most remarkable aspect of this phenomenon: She didn’t really do anything except be herself. She had no profession. She wasn’t a movie star, but was more famous than Julia Roberts. She wasn’t a pop star, but was more famous than Madonna. It is statistically measurable that she was at least half-again more famous (and more popular) than her husband in the waning months of their marriage—in 1994, Charles’s strategic TV interview drew 14 million British viewers, while Diana’s rebuttal the following year attracted 21 million—and this held true when she was again single. She, who no longer had a job, a title or even a personal program beyond her day-to-day itinerary, might well have been the best-known person in the world.

What was this world looking for from Diana—what was the world asking of her—once she was divorced from Charles? Unfortunately, part of that answer is: scoop. What’s the latest dirt from the Buckingham Palace years? Who’s the latest boyfriend? How’s the eating disorder going? The answers to these questions, whether true or a million miles from the truth, sold thousands of newspapers and boosted the ratings of hundreds of TV shows.

The final months of strictly legal entanglement with Charles were as unpleasant for her as the honeymoon had been. At the end of 1992, British Prime Minister John Major lied to the House of Commons when he announced the Waleses’ “amicable separation.” Shortly thereafter the Camillagate transcripts popped up in the papers, sullying the prince’s image forevermore, and in 1993, Diana came to believe her husband was carrying on not only with Mrs. Parker Bowles but with Tiggy Legge-Bourke, whom the prince had hired to help care for Wills and Harry when they were with him. Another woman handling her beloved sons: That was quite enough. When Elizabeth suggested the marriage be dissolved, Diana was willing, though there would be much negotiation and legal wrangling. As the divorce proceedings dragged on, most of the public sided with Diana, especially when the BBC broadcast her 1995 interview with Martin Bashir (who would later get Michael Jackson to talk about his slumber parties with adolescent boys) in which Diana famously said, “There were three of us in this marriage.” That quote endures today as something like the gossip page equivalent of “To be or not to be” or “Four score and seven years ago.” The divorce was finalized on August 28,1996.

So Diana was no longer Her Royal Highness, and was henceforth to be styled Diana, Princess of Wales. (It is enormously telling that, although Camilla Parker Bowles is today owed that title as Prince Charles’s wife, she refuses to use it in deference to Diana’s cult.) The Palace bothered to stress in 1996 that Diana, as a parent of the boys who were second and third in line for the throne, remained a member of the royal family—but such protestations represented semantics, technicalities, legalese. She was essentially persona non grata.

There was little doubt, however, that Diana would be allowed to keep her rooms on the north side of Kensington Palace and that she, the publicly esteemed mother, would continue to raise her boys when they weren’t off at school. While there was no estrangement from their father, William and Harry continued as their mother’s sons.

It is now known that other male presences at Kensington sometimes arrived hidden under blankets in the back seats of cars, or even concealed in the boot (as Brits call the trunk). Diana’s social life became Topic 1A for the worldwide celebrity audience and therefore the celebrity press, and some of the more serious-minded of Diana’s paramours found the glare intolerable, even as they found the woman irresistible.

It is hardly elevating—in fact, it is pointless— to delve into this boyfriend or that one, or to make a list. But it is useful to visit, briefly, the case of Hasnat Khan. He was a Pakistani heart surgeon who carried on a love affair with Diana that lasted from 1995 to 1997- He was a man who mattered. And yet he was one who submitted to being smuggled into Kensington by Diana’s butler/consigliere Paul Burrell, and who sometimes communicated with Diana via notes left at a pub near the hospital where he worked. This was a sober, intelligent man and . . . Well, what to say? It was all absurd. Dating Diana was a circus. Khan wouldn’t allow the circus to progress to matrimony, so Diana was forced to move on from her relationship with him.

Finally, famously and fatefully, there was Dodi al-Fayed, scion in the family that owned Harrods department store in London, the Ritz Hotel in Paris and other interests. This was Diana’s fling of the summer of ’97, and few suppose that it would have gone anywhere. Dodi was a young playboy who had been encouraged in this escapade by his status-seeking father, and Diana was on the mend from the breakup with Khan. That’s not necessarily a solid starting point for a stable relationship.

We say in the title of this chapter that she was reaching out, and racing away.

Reaching out: Diana remained a giving person to the end of her too-brief days, particularly in her lately assumed frontwoman position on the land mines issue; in January of 1997, pictures of her inspecting an Angolan minefield while wearing a flak jacket put that cause front and center. Also, she and British Prime Minister Tony Blair had discussed a post she might assume as a humanitarian minister for the nation. It is said that, had she lived into the autumn of ’97, she and the PM were going to sit down and figure this out. Yes, she was, as many biographers have written, at loose ends when she died. But she was looking forward to a sturdier, more tangible role in English society.

Racing away: She and the media had long been coconspirators, and if there had been occasional dustups, it must be admitted that both pursuer and pursued had relished the game for a good long time. Diana had always enjoyed being “Di.” Well before she became a regular in the tabloids, she was a reader of them, and early on when her girlfriends reported back about a photo or article in which she had starred, she was pleased by the attention. Later, as princess, she was required to balance her affinity for publicity against the desires of her husband and the Palace. Later still, she sought to shield her children. So the once jolly game became a more complicated contest. After the divorce, it became something else altogether—a far more sordid enterprise. Consider this parade of trumpeted headlines from cover stories in issues of People magazine that were published between 1991 and 1997′ “Home Alone,” “Diana’s Rival,” “It’s Over,” “Diana on Her Own,” “Battle for the Boys,” “Diana’s Lonely Battle,” “Diana’s Daring New Life,” “Diana on the Edge,” “Diana’s Secret Lover,” “Diana & Camilla,” “Diana’s Revenge: Take That!” “Di-Vorce!” “A Guy for Di” and “Goodbye, Diana.”

Royals addicts can summon the stories from memory. Others among us, with what we have already learned, can easily fill in the plotline.

According to Hasnat Khan, it was Diana who called off their relationship late one summer night in 1997 while they were walking in the park. Why she wound up with the footloose Dodi al-Fayed within a month has been speculated upon endlessly. On paper, it looks like this: He was as rich as Croesus, and after her hoped-for summer vacation with Wills and Harry in the Hamptons on New York’s Long Island was canceled because of security concerns, al-Layed’s invitation to holiday on the Riviera looked like an appealing option. Al-Fayed’s father bought a new multimillion-dollar yacht, the jonikal, so that the princess could be properly entertained.

Diana and Dodi spent nine days cruising the Mediterranean on the 60-meter boat in late August, then made their way to Paris on August 30. The evening that ensued was crazed in the extreme, with the two of them running from paparazzi, attempting a dining room dinner at the Ritz hotel, changing plans and supping upstairs, finally deciding to make a run for Dodi’s apartment overlooking the Avenue des Champs Elysees. Accounts of those hours are as wildly varied as Diana’s and Charles’s versions of what went wrong between the two of them. They range from Diana being blissful about her fresh pregnancy and incipient engagement to Dodi to her being so overwrought and desperate to be anywhere else in the world that she is openly weeping in a dining room at the Ritz. Dodi’s father would later allege that their deaths were engineered by the British spy agency MI6 on the orders of Diana’s former father-in-law, Prince Philip—that’s how nuts this all gets.

The proven facts are: At about 20 minutes past midnight, Diana and Dodi ducked out a back entrance of the Ritz and dashed into a black Mercedes-Benz. In the front passenger seat was Trevor Rees-Jones of the al-Fayed family’s security team; he would be the only one to survive the crash. Driving, unfortunately, was Henri Paul, the acting head of security at the Ritz, who was under the influence of alcohol and prescription drugs and yet sped away at twice the legal limit to outpace the trailing paparazzi. It should be noted: He was well clear of the pack when he lost control of the car three minutes later at the entrance to the Pont de I’Alma tunnel along the River Seine. The Mercedes hit a pillar and was demolished. Paul and al-Fayed were killed, probably instantly. Diana was not, but her internal injuries were such that, after hours of life-saving efforts at the Pitie-Salpetriere Hospital, she passed away at four a.m.

England woke up to the news that Sunday morning and could not believe what it was hearing. The royal family was of course at Balmoral, since it was late summer. At this Scottish estate that Diana had never loved, Charles told his sons what had happened to their mother.