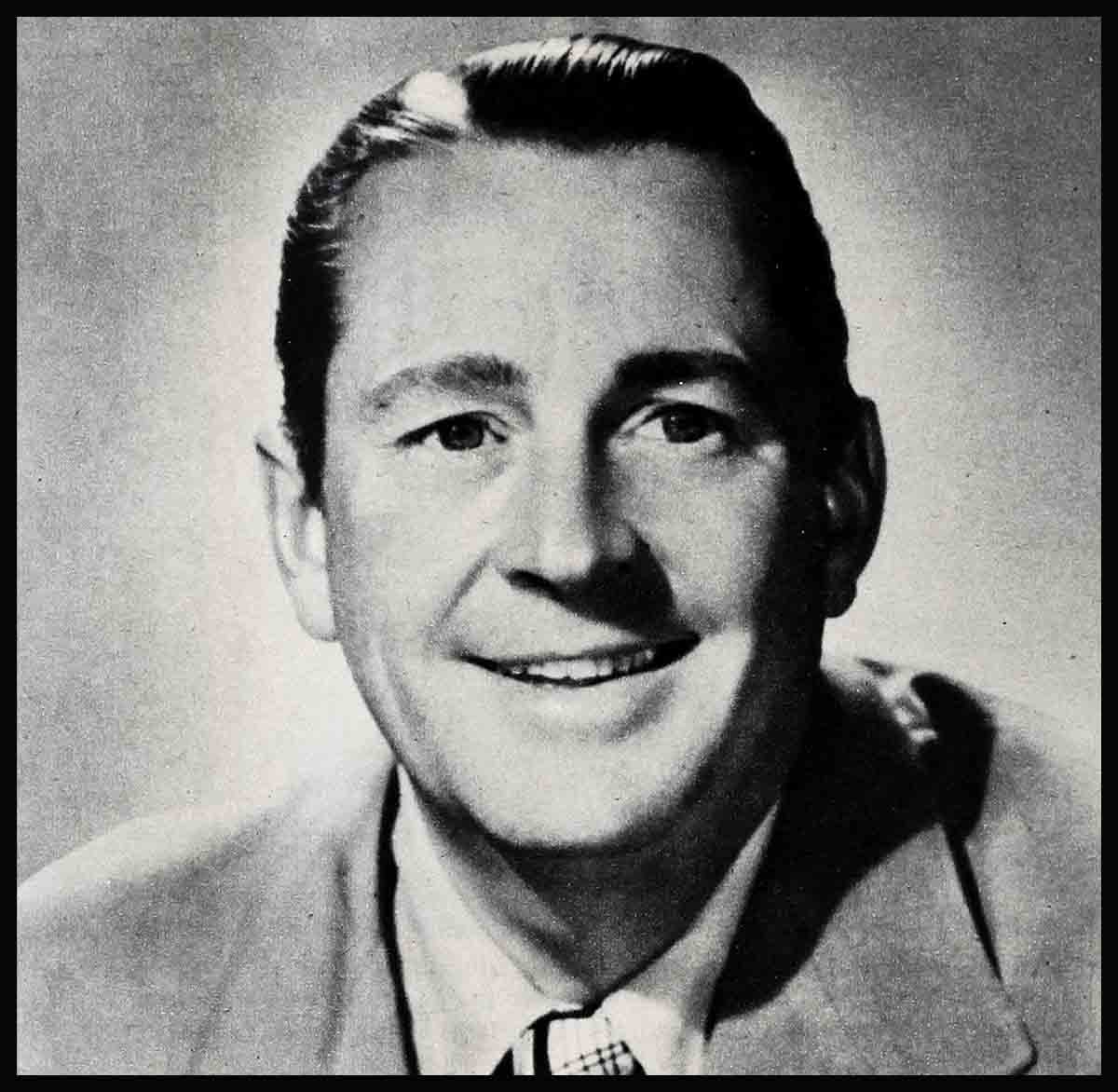 I Got My Second Chance—James Dunn

Some people say that a fellow never gets a second chance: That once you’re through, it’s curtains.

I don’t believe that now. I never have. Everybody gets a second chance. The only catch is being ready for it when it comes your way.

Yes, I suppose I’m what Hollywood calls a “comeback.” That’s like saying, “I was once a flop.” I’m not ashamed to admit I missed the boat and threw away a good career. I’m too glad to be back in the running.

In Hollywood it’s easy to know when you’re back in the swim of things again. When you’re good in a hit picture, you go to a night club and are ushered with pomp and ceremony to the very front row. If you make a not-so-good epic, you think the waiter is beckoning to you, only to find that he’s motioning to the guy behind you. That is, if you’re lucky enough to get inside at all. But get another good picture, as I did in “A Tree Grows In Brooklyn,” and the front row is yours. I’ve been rating the front row again.

But now that front row doesn’t mean much. What means most is that I got a second chance. When it comes, there is a thrill, yes. But it’s tempered with common sense. There’s a tendency to pause and reflect about the mistakes you’ve made. To be sure you never again throw away opportunity.

During the last few years when nothing went my way, I can’t honestly say I felt knocked out. Maybe I’ve been a kind of corn-fed philosopher, believing that there was a silver lining up there in the clouds being made especially for me.

Whenever you’re down, you think of someone important to you. At least, I did. I thought of Pop. He was a great guy. He made a million one day and was broke the next. But life was always a great experience to him. Even in his darkest moments, there was a laugh in his heart, a steel-like courage in his soul.

I’m thinking of him now. I can see his big six-foot-one frame. His massive 250 pounds. His great understanding.

I remember one red-letter Sunday. Mother used to dress me up in Buster Brown clothes. How I hated them! Pop wouldn’t say much. This time he just looked on and said, “Well, son, let’s go for a walk.” We went down to the beach. As we walked in the sand. Pop said hello to a lot of people and kept right on walking down to the water. The closer we came to the ocean, the more people looked at us in surprise. A father taking his young son, dressed up in his Sunday best, apparently right into the water! Finally Pop was leading me out into the ocean. My Buster Brown suit was soaking. Pop’s white trousers were clinging to him and his white shoes were ruined. But he knew how I hated that Buster Brown suit. This was his answer to it. When we got home, he just said to Mother, “Had an accident, Ma.” Accident? Not quite. It was just Pop’s way of laughing.

And the time a man hit me when I was playing with some kids. I wasn’t doing a thing, but he slapped me. I told Pop about it and he dragged me out on the street and made me show him the man who had hit me. Oh, that was some fight! Pop really gave it to him. While he and the man were having at it. Mom came by. She looked at Pop and asked, “Who’s on top?” He held the guy down while he grinned up at her and said, “Well, I am—who did you think was?” Mom’s face turned kind of red when another man yelled out, “That brat of yours!” She turned on him quickly and cried out, “It’s easy to see you haven’t any kids. Come on down and I’ll take care of you myself.”

Yes, Pop was a fighter, but no man was more gentle. He used to go around on Christmas, when he had money, giving bums $10. And the fun he had buying up newspapers on April first, putting them away for a year, and then making a deal with a newsboy a year later to sell them as current papers. He got more kick out of watching the dazed expressions on people’s faces as they read the newspaper and wondered why the news seemed so familiar.

He’s been gone a long time now. Pop has. But in my heart, he’s never gone away. He’s been right beside me—just as the Queen has, my Mom, during these years. And just as she is now.

I owe a lot to Mom. She’s crippled now, but nothing has daunted her enthusiasm for life. She’s been the strength behind me. She’s been near when a laugh was what I needed. The strength in me is the strength of the Queen and of Pop. Only when I felt I didn’t need their help did I make my mistakes.

I was an easy-going fellow when I had success. All that mattered to me was a lot of fun, plenty of laughs and no obligations of any kind. Guess I was a little like Johnny Nolan. I wasn’t interested in saving my money. I always opened my pocketbook to any fellow who asked for a loan. It was, “Sure, how much?” with me. Yes, I had a lot of people who knew me in those days. They were anxious to go on knowing me—as long as that pocketbook stayed open. I was too involved in my own little whirl to see what they were doing to me—and what I was doing to myself. But when I wasn’t in the money, how different it was! Once, I went to a fan to ask for the money I had loaned him. It was only $150 but it would have helped me. He insisted he had already paid me. I argued with him for a while and then decided to forget it. What good does it do to argue with a man who remembers to forget so quickly?

Yet, there were those who didn’t forget me when I was not among the running. I found that out in New York when I made personal appearances for “A Tree Grows In Brooklyn.” At one press conference at the St. Regis, I had the largest turnout of newspaper people for any personality in a long time. One hundred percent showing. They hadn’t come to see me just because I had a hit picture. True, I hadn’t heard from them often, but I somehow knew they were behind me all of the time. It was the way they spoke to me. The deep-felt sincerity. The honesty in their eyes as they said, “Glad you’re back, Jimmy.”

For the first time in months I’ve seen myself as I was. I used to excuse my irresponsibility by saying, “Well, I was never late on a set. I never caused any director trouble.” It was easy to go on my merry way. To laugh at what really mattered.

But laughter hides many things. It hides a subconscious dissatisfaction with yourself. It pulls down the shades on something you know is there but don’t want to see.

. . . I remember coming home one night late. I was in the dough then. But there was an emptiness inside me, even though I had spent the whole evening being the life of the party. The house was dark when I walked in. The Queen was asleep. I lit a cigarette and sat there thinking. Then I heard the clock ticking off the hour. Still I sat there. All kinds of crazy, intangible thoughts whirled through my mind. Could I continue to make life just a game where I always had to hold the right hand?

Where was I heading?

As I lay in bed that night, I kept asking myself, “What have I to show for my life so far?”

I was determined to change at once. But the next day, I slipped back into my easy groove. It wasn’t until I found myself out of a career that I began to see as clearly in the day as I did that night. I began to learn, in the middle of adversity, the full meaning of pride in myself. I learned there was a zest to be had from life by fighting discouragement, by assuming responsibilities. I forgot my so-called need for good times. I began to make plans for my future. I began to save what money I could. I found real pleasure in the things money can’t buy—the honesty of real and true friendships, the ability to look upon each day as a thrilling challenge.

But then I got another second chance. This time it was at love—a genuine love. I’ve known Edna for over nineteen years. And what a lot of wasted years they’ve been! We were like two spoiled children. We took the easy way and let ourselves get sidetracked.

… I remember when I first met her those many years ago. It was on a blind date—in Flatbush. I wasn’t too anxious to go, but the minute I saw her, something inside me began ticking. I knew she was the one. We made plans to marry—and then it happened. I came to Hollywood. She stayed back east. The years sped by quickly. She waited for me until she was thirty. And then she married. . . .

Now I know why so much of my life in the last few years had such an aimless course. I was searching for something, someone who could make me want to amount to something. Someone to share the thrill of progress with and the bitter taste of defeat.

That person was Edna. When I saw her again, it was like a cloud lifting from my heart. Six months ago when I came east for the premiere of “A Tree Grows In Brooklyn” we were married. Now that I’ve found her again, I know I’ll never let her go.

And there was her five-year-old boy. Such a lovable kid. The first time he saw me, he put his arms around me and said, “Daddy Jim.” He calls me “California Jim” at times, too. It’s a wonderful feeling to pick up the threads of nineteen long years and to be able to see a smile on her face and to hear the little fellow’s tinkling laugh even when they’re away.

. . . Pop’s come back to me now too. Closer than before. I can hear his booming voice saying, “Don’t let people step on you, Jimmy. Don’t lose your hope. Don’t drink too much, don’t eat too much, don’t play too much. If you’re knocked down, come back up.”

Yes, I remember. Pop, and I’ve learned. Yet, I have no regrets. Or else I have too many. I don’t know which. I do know that what I’ve learned has taught me to give to life what I want it to give to me. To avoid the easy way. I’ll never be knocked down again!