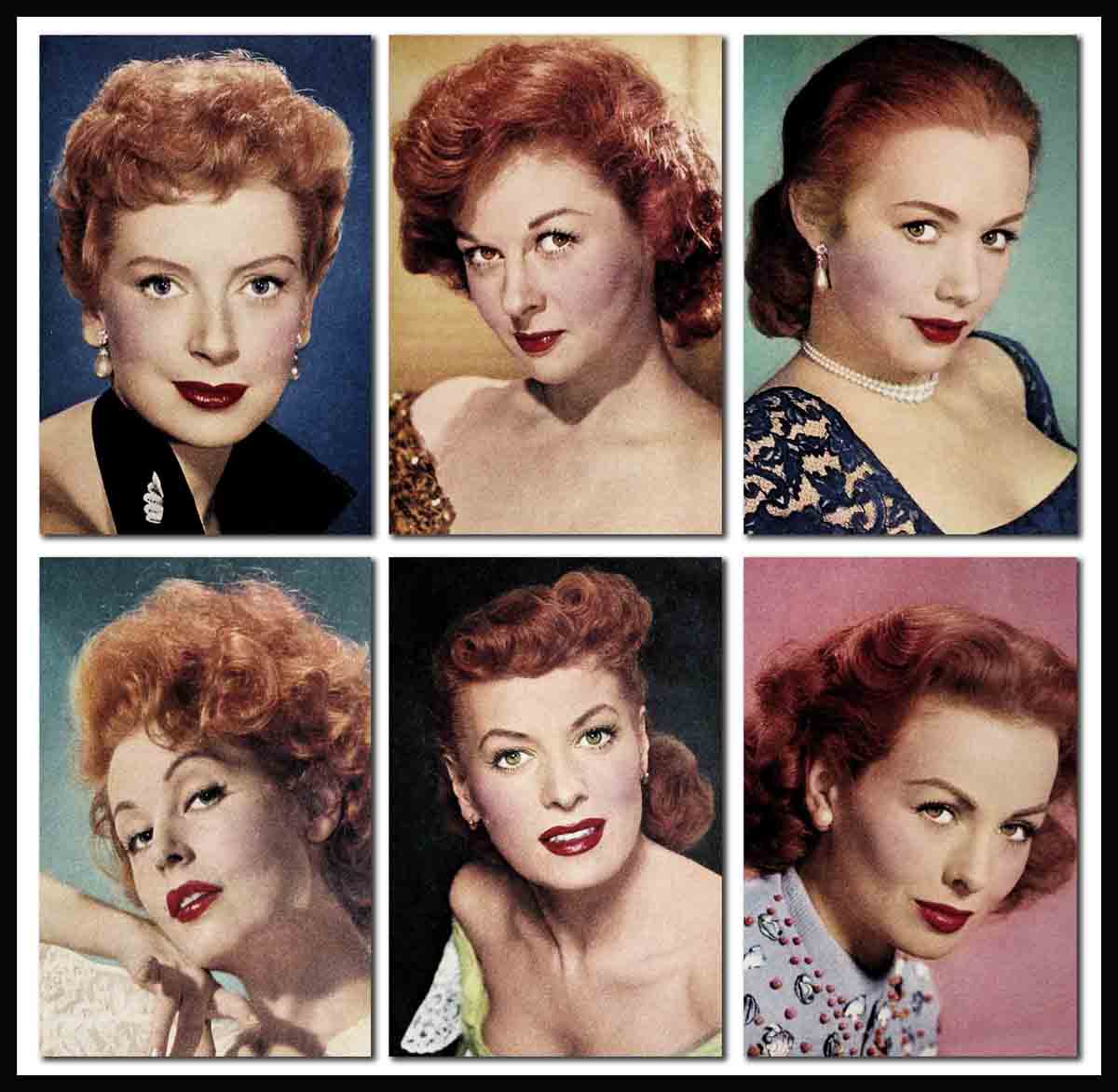 There’s a patter chorus to that solid heartbreak song, “St. Louis Blues,” that winds up something like this: “But a red-headed woman is the woman that does the harm.”

The warning is as old as history. Redheads seem to have a mysterious built-in something that makes men reel—while other women recoil. In Hollywood the redhead holds a specialplace in the scheme of things. When she hoves into sight, directors duck and producers squirm—and all over America theatre owners get ready for long lines at the boxoffice.

Redheads make headlines—take Arlene Dahl or Maureen O’Hara as examples. And they make conversation. Susan Hayward, for instance, never backs away from a controversial subject. Scarlet-topped Piper Laurie may seem sweet and demure, but she knows every instant just what she’s doing—ask those who’ve crossed her!

What’s most remarkable in these tempestuous bundles of talent and temper is that the qualities they have in common seem to exist whether the girls were born with their fiery manes, or somewhere along the way, dunked their tresses in a vermilion-colored rinse.

A blonde tints, and she moves right into the torrid zone in the boy-meets-girl world. A brunette dyes, and she goes glamorous and amorous and gets the urge to set everything around her on fire.

Certainly Wanda Hendrix has changed since she became a redhead. In the days when she was married to Audie Murphy, she was self-effacing, demure and seldom had a word to say. Now she’s pert, talkative, unpredictable and acts as if she were ready to take a chance on anything.

Rita Hayworth did a complete personality switch when she bleached her ebony tresses and then had them dyed red for the picture, “Strawberry Blonde.” It seems more than coincidence that it was just at that time that Rita first began to be squired about by the eccentric Orson Welles. Up until then, she had been definitely on the retiring side. She always reached out for a steady hand to guide her in both her career and her love life. Then suddenly, she was making up her own mind—about everything. And she’s never looked back—never once behaved in any way to recall the quiet, reticent girl she used to be.

Rhonda Fleming has changed some spots, too. She never learned to flirt outrageously until her hair turned a real red. There were always reddish tints among the brown, but it was when she decided to do away with the brown completely that things really started to buzz.

Susan Hayward is a natural redhead, and her red-headed personality comes natural too. In the old days, before she was under contract to Twentieth, Susie was constantly on suspension. If she wasn’t turning down a role, she was arguing with her bosses. Or she was doing them both at the same time. It didn’t take Hollywood long to learn the proper respect for both her temper and her temperament.

Her closest friends will tell you that it’s impossible ever to know just exactly what’s on her mind. She’s likely to do anything at any moment, and when her eyes start to flash—watch out! To be around her, the story goes, is like putting a touch of cayenne pepper on a ham sandwich.

The only person who can possibly keep Susan in tow is her husband, Jess Barker. His system? Let her have her own way—or let her think so!

Just the same, Jess takes no chances with Susan’s peppery temperament. Recently, when a national magazine asked Jess to byline an article on “Gentlemen Prefer Blondes,” he declined with a quiet, “Over my red-headed wife’s dead body!”

Arlene Dahl used to be a sweet little blonde. Lovely to look at, but not at all exciting. Men gazed at her and thought about their kid sisters and were filled with a great desire to keep her from all harm. Now, with her curls glinting coppery against the California sun, the guys take one look and forget they ever had a mother—let alone a kid sister.

When she was still married to Lex Barker, he made the mistake of calling her a “small-town hick.” Arlene’s red temper flared. She got herself a divorce—brightened her hair by several shades—and wound up with Fernando Lamas, who seems to have no complaints at all. She’s apparently enough of a big-town girl for a big-town boy like him.

Piper Laurie is another red-headed gal who’s voltage keeps stepping up bit by bit. When she first began to brighten her hair—on studio orders—she was a cute little kitten. But gradually, as the red’s been getting redder and redder, she’s been turning into a dangerous tiger cub.

It wasn’t so long ago that her dates were almost exclusively with Leonard Goldstein—old enough to be her father, and protective as a man can be. Then came the switch. And Piper—no longer meek little Piper—astounded the town by snatching one of its most appealing newcomers, Carlos Thompson. And snatching him, if you please, right out of the arms of the dynamic brunette, Yvonne DeCarlo.

Maureen O’Hara never really tested the magnetic lure of her natural red hair until she went to Mexico. Those Latins set up such a clamor about her titian tresses that, for the first time, she began to realize the true value of her feminine wares.

Perhaps her marriage to Will Price was heading for the rocks anyway. But her trek south of the border—and her new awareness of herself—wound it up.

Deborah Kerr, another natural redhead, has always allowed her British reserve to conceal her fiery nature. If she had been a native of any other country, she probably would have skyrocketed across the Hollywood scene like a jet plane. Recently, she’s been allowing her real self to peek through a little, and the movie industry is beginning—at last—to sit up and take notice. She’s been given the chance to play a torrid role in “From Here to Eternity,” and a chance for her natural red-headed magnetism to show through! As Deborah views it, “I’m finally being allowed to take off that tiara Hollywood placed on my head. I’m even posing for photos in some very scanty attire. And it’s all in the script!”

As far as Jeanne Crain’s public is concerned, Jeannie’s not the gal she used to be before she dyed her hair. But the evidence, so far, is that the public is letting its imagination run away with itself—in this one case.

Her husband, Paul Brinkman, who, perhaps, knows her better than anyone else in the world, says she’s not one whit different from the chestnut-haired girl he married.

“Sure, Jeanne’s a redhead now,” he says, “but not in disposition! We’ve been married more years than I dare say, but I’ve never found out how to get her angry. She had her hair dyed for her role in ‘Vicki,’ but the change hasn’t made her temperamental. I don’t know what other red-headed gals are like, but Jeanne wouldn’t get excited if I told her I was flying to Mars tomorrow. No matter what color her hair was, she’d still be as calm as a kitten sleeping in the sun.”

But Helen Bore (pronounced Boray) of the Westmore Beauty Salon, who has dyed the hair of practically everybody who’s anybody in the movie industry, says that Paul Brinkman is deluding himself.

“Jeanne will change,” are her words. “I’ve dyed enough hair around Hollywood to know it always makes a difference. People do change their personalities when they change their hair color. Maybe it’s because they think they’re expected to.”

Or maybe—and this seems even more likely—maybe they dye their hair to make it match their personalities.

So it isn’t any wonder that synthetic as well as real redheads stimulate the minds and the imaginations of everyone they come in contact with. And this reaction—presto!—turns even a gal who once seemed to be almost mousy into a red pepper!

(Rhonda Fleming is in “Those Sisters from Seattle”; Susan Hayward’s in “The President’s Lady”; Arlene Dahl’s next is “Sangaree”; Piper Laurie is in “The Golden Blade”.)