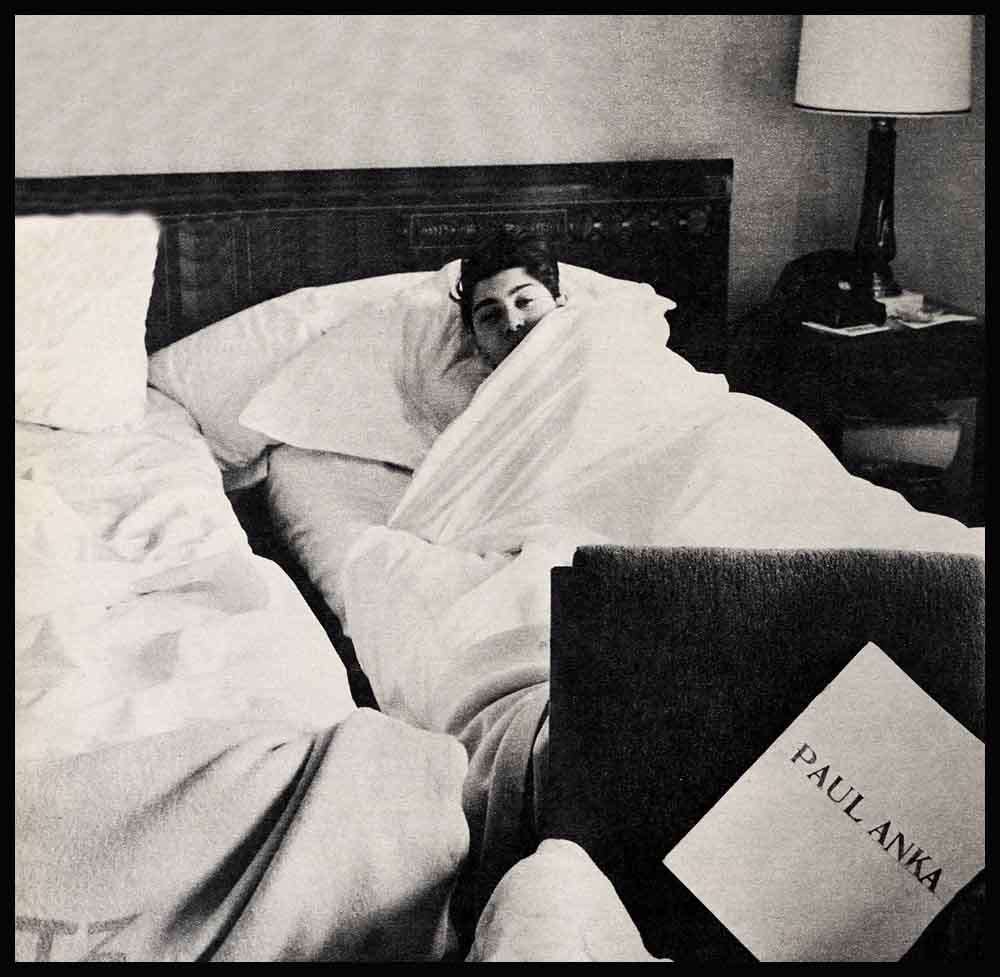 Getting Personal With Paul Anka

6:20 came a sleepy voice from behind the door of the St. Moritz’ plush suite 16A. “Even the milkman isn’t up yet!” A shuffling of feet, a minute’s wait and a sleepy-eyed Paul Anka in blue and white striped robe and pj’s opened the door for Photoplay. “Hi,” he yawned at the assorted staffers in the hall. “Come on in.” Paul limped back to bed, sitting on the edge until he woke up a bit. As photographer Gene Cook began popping flash-bulbs, writer Ernie Stone started popping questions at the sixteen-year-old singer-songwriter whose hit record, “Diana,” skyrocketed him to fame. “About not being up and dressed . . .” Paul began, and we said we understood. The coffee he’d ordered for everyone arrived, along with his breakfast of orange juice, double order of bacon, eggs and toast. “Boy! Am I going to sleep when I get on that plane back home to sweet little Ottawa,” he said as he gulped some orange juice. “We started recording two o’clock yesterday afternoon, worked until near five. Then we came back at nine and cut until two this morning. This is my first album—I want it to be good. Sure is hard work, but I think it’s coming out fine.” He was beginning to come awake and as he spoke in sudden rushes of words, it was obvious that Paul, for all his tender years, catches on to things quickly.

As he started on the first section of his bacon and eggs he talked about himself. The fact is that he’s the eldest of three children and that his interest in music started “ ’way back as a kid. Lots of people think I only sing. But I can play a little piano and love to fool around with the ukulele.” Paul wrote his first song about three years ago when he was attending Fisher Park High School in Ottawa. It was about this same time that he and two friends formed a trio and began playing weekend dates in and around their home town. All fun at first, the boys began taking themselves and their jobs a little more seriously when engagements began coming in. They started rehearsing more frequently and were soon looking for a style that would make them stand out in front of their audiences.

Paul felt that the material they were using wasn’t showing them off to best advantage, and being unable to pay an established writer to do songs for the group, Paul started writing the material for the act himself. His efforts were rewarded with a certain amount of local success.

About this time opportunity knocked in the form of an invitation, and Paul was there to open the door. He talked his parents into letting him take a vacation trip to Hollywood with an aunt and, while in Hollywood, persuaded his uncle, who is an actor, to talk to some recording people he knew to get Paul an audition. As a result of one of these meetings he recorded his first two sides for a small label in California.

“The record sold about twenty-five copies in the United States,” Paul says, “but it did much better in Canada—about 25,000.

“I was not sixteen yet. I talked my parents—after many weeks of coaxing—into allowing me to make a trip to New York alone. They finally said ‘yes,’ provided—if nothing happened after one month—I’d return home.”

Paul knew nothing about New York, or anyone in New York but, through a chance meeting in Ottawa with a group called the Rover Boys, who were at that time recording for ABC-Paramount, he learned of the name Don Costa.

“I arrived in New York on a Tuesday in March of last year and went to the offices of ABC-Paramount. When I asked the receptionist for Mr. Costa, she said he was out but she told me to come back the next day. She seemed kind of surprised when I turned up bright and early the next day. I wasn’t thinking so much of talking to Mr. Costa about singing as I was about songwriting. But when I got to him there wasn’t anybody around to demonstrate the songs, so I had to sing them myself. The next thing I knew Mr. Costa called Sam Clarke (president of ABC Paramount) and they decided I should record four of my own songs!

“While we were getting the arrangements ready for the session,” Paul continued, “Mr. Costa told me that he wanted to use one of the four songs for another artist who would be recording before I was. so this left me one song short. I had begun writing a new song just a few days before this happened and I mentioned this to Mr. Costa. It wasn’t finished but he liked it and told me to complete it. The name of the song was ‘Diana.’ ”

The rest, of course, is now recording history. “Diana” was an immediate success and Paul Anka was established as one of the new stars on the recording horizon. The disc sold over one million copies not only in the United States but in Canada, England, and Australia as well. Four gold records!

“You see this,” Paul said suddenly. He removed a gold watch from his wrist. “I’m very proud of this watch. The face of the watch is in the shape of a gold record (symbol of a million seller) and on the back is the inscription ‘Thanks (for) a million’—and it’s signed Sam Clarke.”

With Paul’s success as a recording artist there came personal appearances on TV shows, including “The Ed Sullivan Show,” and his first cross-country tour with a show called “The Biggest Show of ’57” playing the leading cities—and some of the smaller ones too—throughout the United States and Canada. Paul told us a funny story about the windup of the trip.

“We had been playing one-nighters and the tour was to end up in a place called Moscow, Idaho. Fats Domino, LaVerne Baker, The Everly Brothers, The Crickets and Frankie Lymon were some of the talent in the troupe. During the trip, they good-naturedly kidded me—you gotta expect this when you’re a kid and green at the business. But I was kind of surprised when after the last performance, I suddenly was surrounded by everyone in the company. ‘Hey, what’s up?’ I asked. Nobody answered. The next thing I knew Fats was tearing off my shirt, a couple of guys—by this time I was too confused— picked me up and carried me over to a barrel of gook. ‘What’re you doin?’ was all I could say. ‘What are you tarrin’ and featherin’ me for?’ It wasn’t until I was just about covered that I realized—this was my initiation! After a first trip, everyone gets the business. Later, Frankie Lymon laughingly told me that he’d been thrown into a bathtub full of ice water after his first tour. . . .

“After this tour I was invited to perform in England and Scotland.

“In Glasgow just before I went on, 1,000 kids in the audience got up and started chanting my name. I had been feeling kind of lonely—being so far from home—but when I heard them calling my name it really made me feel great. You know, I think it was one of the greatest things that ever happened to me.”

After England and Scotland came tours of Australia and Hawaii and back to the United States for more recordings and more appearances.

Paul spoke with a great deal of pleasure in describing the reactions of the audiences Down Under.

“The Australian audiences are among the best in the world.” Paul said, “especially the young people.”

Back in the United States, Paul’s next release turned out to be another big favorite. “You Are My Destiny” has been collecting coins in all the jukeboxes and sales across the record counters all over the country are so good that it looks like this one, too, could pass that golden million mark. And Paul wrote it! (More royalty checks to worry about!)

Just recently Paul chalked up another first for himself. He finished making his first movie with Julius La Rosa and such other outstanding recording artists as Danny and the Juniors, Della Reese and Roy Hamilton. “The movie was shot in New York,” Paul explained. “It’s called ‘Let’s Rock.’ ” The song Paul sings is a little ditty entitled “I’m still Waiting Here for You” and, of course, this will be his next release for ABC-Paramount.

What does Paul do when he isn’t performing or writing songs?

“Well, I love to swim, for one thing. That’s my favorite form of exercise and relaxation. I used to play hockey back home in Ottawa, and the other kids always wanted me to be goalie. But after getting hit a couple of times in the face by the puck, I decided to give that up. I’m a good ice skater and enjoy that very much, but then, everyone in Canada is a pretty good skater. I just bought a new car, but I guess I won’t get to drive it for a while—not till I get back from my next tour in Europe.

How about the folks back home—his family and friends—how did they feel about his quick success?

“My father owns a restaurant in Ottawa (It is, incidentally, in case you’re ever in Ottawa, called ‘The Locanda’) and business has been very good lately,” Paul said. “When people ask about me, this pleases my father very much. But one of my uncles, who is a lawyer, was very funny about the whole thing. The last time I was home he said he didn’t mind people stopping him on the street to ask about me and he didn’t mind his clients discussing my records with him, but he did resent the fact that they were taking up so much extra time that he was getting home every night to dinner later and later.”

Paul has a younger sister who is just fourteen “but she doesn’t care much for this kind of thing.” However, his younger brother, age eight, “is a real ham” and “he’ll perform at the drop of a hat,” Paul laughed.

Paul was asked if he had a special girl back home or if he’s met anyone he’s particularly interested in. He smiled, “There’s plenty of time before I start thinking about getting serious with any girl . . . although I do have some favorites, like Natalie Wood and Debbie Reynolds. And that French girl—what’s her name? Brigitte Bardot?”

Is there anything he wants to do? Any special goal he’s aiming for? Any particular ambition he hopes to realize?

“If I can continue to make records that will please the public, if I can continue to be a part of this new and wonderful business I’m learning, I think that will make me happy for a while. Don’t think I don’t know what a lucky guy I am to have had all of this happen so fast—to be able to see and do what I’ve done in just one year—so don’t believe that rumor about my wanting to retire by the time I’m eighteen—I just want to keep going for a long time to come!”