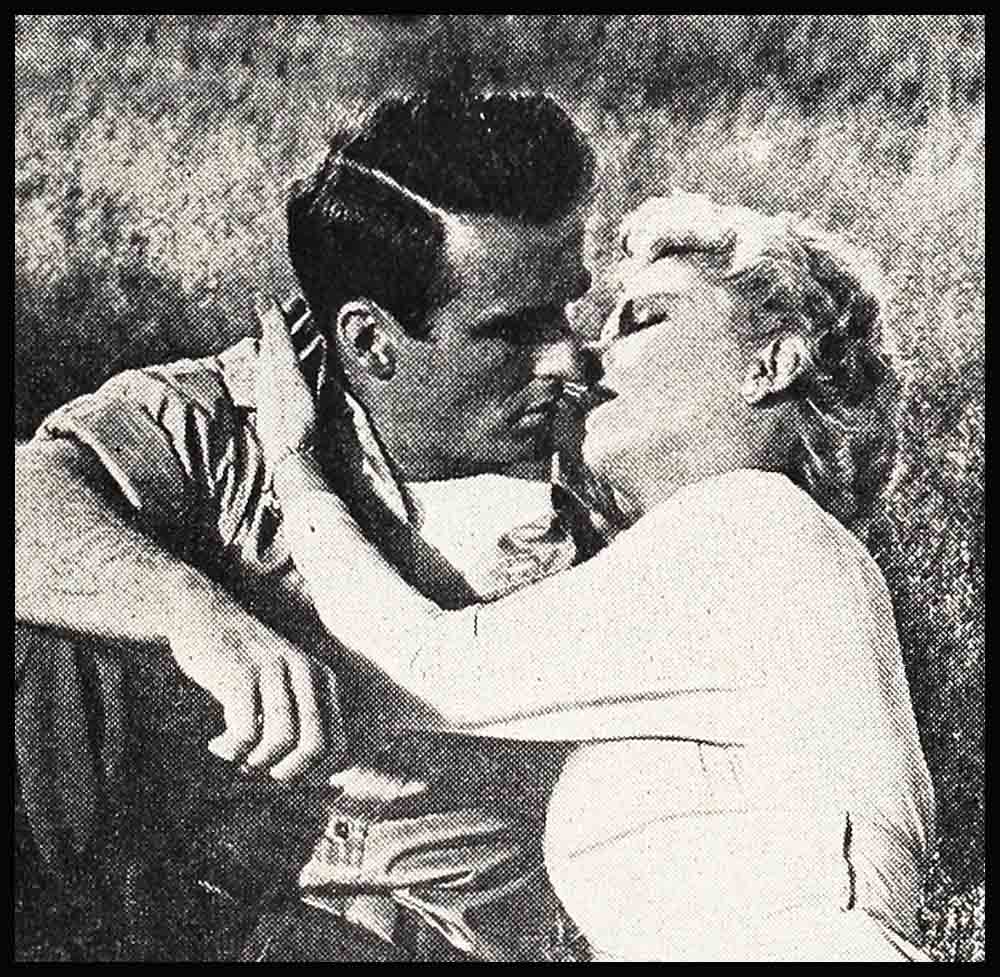 The title’s as puzzling and provocative as the choice of co-stars—Humphrey Bogart and June Allyson. But both turn out to be well justified. The mobile hospital units that operate so courageously close to the front in Korea are housed in tents that must be struck, moved and set up again as rapidly as the circus variety. Indeed, the sergeant in charge of this operation (Keenan Wynn, an asset to any movie), is supposed to be a graduate of the big top. Precise as its details are, the picture doesn’t try to suggest the full impact of war. It’s primarily a love story, interpreted with warmth by the unexpectedly teamed stars. Bogey and June play a surgeon and a nurse whose quick romance is ruffled by the fact that he’s marriage-shy. The situation may be realistic, but the film’s emphasis doesn’t seem in the best of taste. Robert Keith and Adele Longmire shine in minor roles.

Verdict: Surface glance at love and heroism in Korea (Adult)

In effect, this is a concert for classical-music fans, featuring top names in the field and many familiar numbers in the repertory. The slender narrative presents David Wayne as Sol Hurok, music-lover who discovered during his youth in Russia that he had no musical talents—and therefore turned to selling other people’s. Wayne’s acting is subdued and gentle (with a now-you-hear-it-now-you-don’t accent), and Anne Bancroft looks charming as his wife. When the would-be impresario attains his dream in the United States, present-day greats enter the picture to portray artists of the past: Isaac Stern as Eugene Ysaye; Tamara Toumanova as Anna Pavlova; Ezio Pinza as the temperamental Chaliapin—best job in the film. As fictitious young singers and lovers, Roberta Peters and Byron Palmer are slightly pallid, though Palmer’s looks will win him a following.

Comical terrors of many a service movie, the MP’s are treated cavalierly in this farce, which improbably introduces Bob Hope and Mickey Rooney into their midst. It happens this away: Champ Stanley Clements gets those “greetings,” and manager Hope enlists to keep an eye on the screwball fighter. But Stash is rejected as an obvious psycho, and Hope is trapped in uniform. As for Rooney, he’s a humble draftee who latches onto Hope to further his own ring ambitions. Though Bob has all his old skill with a gag line or a double take, he seems to be coasting; the “new” Rooney, former brashness left behind, comes across better. Eddie Mayehoff, a fugitive from Martin and Lewis, is hilarious as a pompous MP officer who does everything by the book. Curves, song numbers and love interest are Marilyn Maxwell’s contributions to this combined service comedy and ring thriller.

There’s a new and pleasing maturity about Jane Powell’s voice and appearance. Unhappily, the same can’t be said about her latest film, a rattle-brained fancy taking place in such a small town as never existed outside musical comedy. That would be okay if the story were correspondingly whimsical, but it’s mostly rather limp. Farley Granger’s stuck with the unlovable role of a spoiled playboy arrested for doing eighty-five through Duck Creek. The judge (Robert Keith) gives him thirty days, but the judge’s daughter (Janie) gives the prisoner consolation. The brightest scenes involve match-making S. Z. Sakall and his dance-crazy son, Bobby Van. Bobby’s brisk personality and dexterous feet are picture-stealers. Ann Miller, as Farley’s gold-digging fiancee, does a couple of her efficient tap routines. Looking and sounding mighty pretty, Janie has several nice songs.

Strong emotional performances by Montgomery Clift and Anne Baxter are the mainstay of this generally gripping movie, filmed on location in Quebec. It’s a murder mystery of the inside-out type: That is, the audience knows the killer from the beginning, and the suspense lies in watching the police fumble for the truth. As a young priest, Clift hears the murderer’s confession. But the secrecy of the confessional must be kept even when suspicion falls upon the priest himself. The dead man had been blackmailing a young matron (Anne), Clift’s sweetheart in the days before he decided to take holy orders, and Clift’s reputation had also been threatened. Handsome Roger Dann is sympathetic as Anne’s husband, but Karl Malden’s shrewd performance as the inspector is hampered by a shaky story that uses accident and coincidence too freely. Director Alfred Hitchcock should know better!

Audie Murphy’s latest Western is no lumbering, pretentious epic. Close in flavor to the traditional horse opera, it’s nevertheless a thoroughly satisfying movie, light and lively, with crackling dialogue, an unusual, believable plot, and a collection of very pleasing people. Audie, tossing off his lines with ease, is equally convincing in love scenes and menacing moments—in spite of that baby face. He’s a tough young drifter who’s served his time as a hired gunman in range wars, and now wants to settle down quietly on a ranch of his own. Thanks to a bit of trickery by the admirable Paul Kelly, Audie suddenly finds himself in possession of said ranch—complete with mortgage, unpaid cowhands and a powerful neighbor who’s out to grab the land legally or violently. Susan Cabot, a delectable good girl, and Mary Castle, a handsome dance-hall queen. provide unorthodox dashes of sex.

The Story of Mandy (RANK, U-l)

Made in England, this deeply affecting drama deals with a problem that might confront parents anywhere. These two, portrayed sympathetically by Phyllis Calvert and Terence Morgan, discover that their beloved small daughter has not learned to talk because she is totally, hopelessly deaf. Little Mandy Miller’s interpretation of this role is completely natural and profoundly touching. Phyllis finds a school for deaf children, run by the gruff but dedicated Jack Hawkins. and then must try to overcome her husband’s distaste for “institutions.” The discord ends in the couple’s separation.

But the domestic angle seems trivial in contrast to Mandy’s own story. her struggle to find a footing in these new surroundings, and to learn to talk. Filmed at an actual school for the deaf, these scenes have the impact of truth.

One of the most remarkable episodes of American history furnishes a solid foundation for an action yarn starring Rock Hudson, Anthony Quinn and Barbara Hale. It’s the story of the Seminole Indians who refused to be ousted from Florida and exiled westward. A remnant of the tribe stayed i entrenched in the Everglades. Rock staunchly plays the viewpoint character, an Army lieutenant who resents his unjust assignment. But Quinn has the real hero’s I role, portraying Chief Osceola with dignity and fire. He shares the love story with Barbara, a white girl who upholds the Seminoles’ cause. Though the swamp warfare is sometimes exciting, the film is short on skill and imagination.

Verdict: Satisfactory Southern Western, not quite equal to its theme (Family)

The Magnetic Monster (U. A.)

Here’s about the finest piece of Science fiction so far: no fantasy, but a could-come-true chiller, presented in a semi-documentary style that heightens its terrors. Richard Carlson’s likable as a scientist whose job is to keep constant check on the amount of radio-activity in the atmosphere. One morning. his Geiger counters go into a frenzy. A search as matter-of-fact as any on the air’s “Dragnet” leads the scientists to a small lump of deadly stuff— a new element evolved by a physicist. The element is hungry for energy. Each time it feeds, its size, its magnetic power and its hunger are doubled! Unless a solution is found promptly, it will pull the earth’s magnetic pole off balance and send us careening into space. (Nervous note to experimenting physicists: Watch it, boys! )

Technique, in this case, proves more interesting than plot—an African adventure involving Robert Stack, Barbara Britton and Nigel Bruce. Here’s the first story-film in three-dimensions, showing you people in the round and scenery that has depth. A spear thrown toward you, a charging lion, a close-up love scene provide startling moments. The story is something about man-eating lions that interrupt the building of a railroad. You may overlook this to watch a pioneering experiment in 3-D, crude as early talkies, but of historical importance.

Verdict: Notable as a museum piece and a forecast of possibilities (Family)

An inept, dialogue-bound melodrama stars Frank Lovejoy as a bookie-ring boss who’s managed to retain a heart of gold through twenty years of illegal activity and association with extremely low characters. A newspaperman’s crusade, the loyal love of a publisher’s daughter (Joan Weldon) and the nearly impenetrable innocence of his motherless son (Bob Arthur) combine to convince the boss that he’s been a bad boy. Joan, a newcomer, is too mannered, but she has a precise beauty that rates a far better showcase than this one.

Turning honest Citizen, unlucky Frank Lovejoy is bogged down in a dreary session of would-be suspense. He and pal Edmond O’Brien, off on a hunting trip, foolishly pick up a hitch-hiker (William Talman). This fellow is a mad killer, who keeps the pair helpless, terrorized captives until the movie comes to a welcome finish.

Here’s another generous helping of juicy, unabashed corn. Leaving their offspring in the care of an ample squaw, the Kettles go off on a Paris toot, guests of their oldest son’s wealthy in-laws. The script doesn’t miss any of the traditional Paris gags, from the “naughty” postcards to the flaming crepes suzette. But even a sophisticated movie-goer would have a tough time suppressing giggles when the irresistible Percy Kilbride’s in action, especially when he tangles with a spy ring. Marjori

e Main’s mostly the foil this time, and there’s no junior love interest.

Verdict: Good-natured hokum that delivers its quota of laughs (Family)