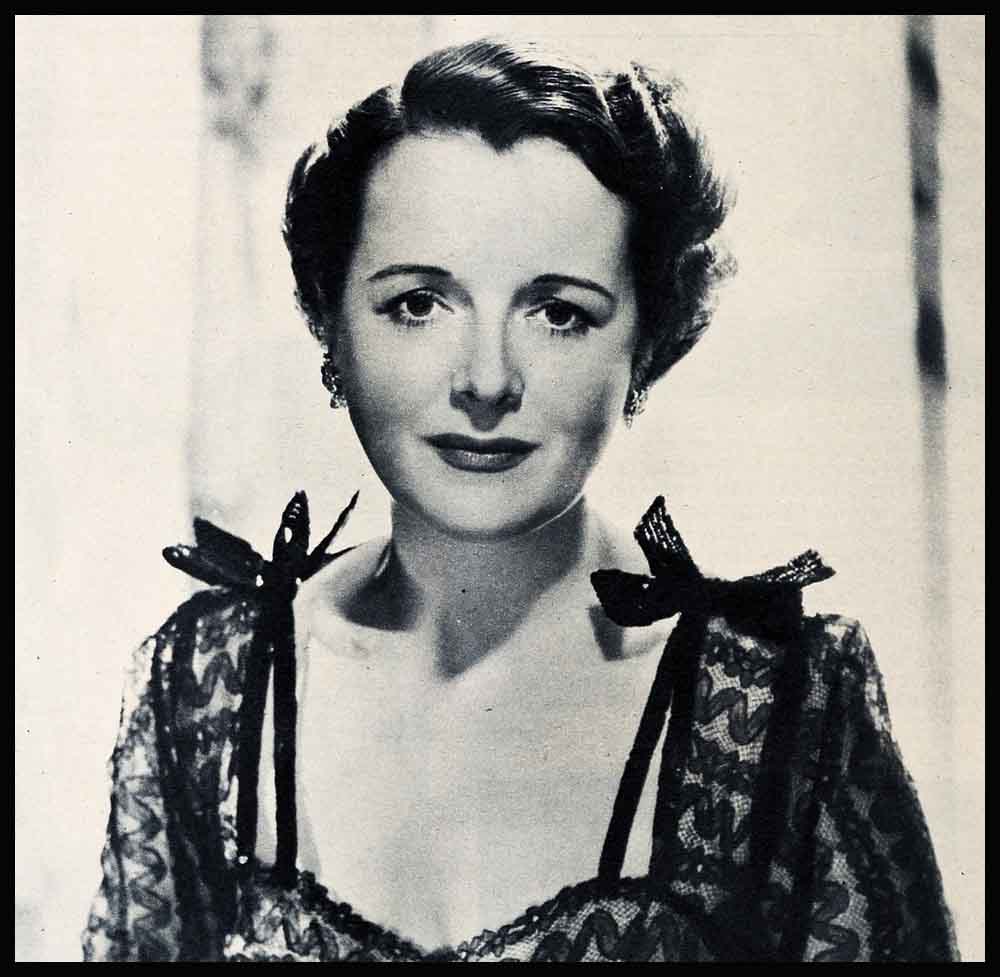 Will He Want To Come Home?

It happened over two years ago when I was doing some work for the Civilian Air Patrol in Southern California. A few of us were having a brief rest period in the office. Suddenly one of the girls who had been reading a V-mail letter touched the silver wings pinned over her heart and said in a low voice, “I’m afraid. . . .”

“That he won’t come back?” I asked, noting the letter and preparing to offer the obvious reassurances.

It was the first time I’d heard that thought put into words as someone’s personal problem. It was not to be the last. Everywhere today women are asking variations of that question; the girls who are afraid their sweethearts will have met more exciting girls in foreign lands, the young mothers who fear their husbands will have become so used to adventure that they’ll hate the routine of a home and small babies; the older mothers who want to know if their sons will come home gangsters and killers.

I’d like to offer this answer from first-hand experience.

While in New York, recently, I visited four wards in Halloran Hospital. Two of them housed the penicillin and traction cases. They were not pretty.

One of the boys said he hoped “this” would be over “very soon.” He told me, “My wife is working in a defense plant, helping support our three kids. And doing all her own housework, too. Piloting a Wellington bomber over enemy territory was a big bang, sure, but I can’t wait until I get back home and can take care of her again.”

Another lad showed me a picture of his fifteen-month-sold son. He said, his eyes shadowed by two kinds of pain, “I’ve never seen the little beggar. I wish I had. I’ve missed all the fun and excitement of his first tooth, first step, first word . . . What? Oh, sure, I was at Guadalcanal. But missing fifteen months of that kid, gee—”

Still another boy had fallen on a bomb somewhere in the South Pacific fourteen months before I saw him. It had exploded under his chest. “I was in as many pieces as Humpty Dumpty,” he told me, grinning. “But the medicos picked up the pieces and put them together again. They’re good at jigsaw puzzles. So now I’m okay except that, once in awhile, I still cough up pieces of my old shirt. So now I’m out of the show. I’m sorry to be out while the other fellows are still in there doing the job. But gosh, when I think that pretty soon now I’ll be with the missus again!”

Farther down the ward there was a kid whose heart stopped a bullet. A big one. The surgeons had removed his heart, extracted the bullet, put the heart back and started it ticking again. He said, “Smart guys, what? For although I can’t take a crack at another Zero I can, in time, push the old lawnmower and shake down the furnace back home.”

And finally there was carrot-topped young Jim’s story: “We were in Burma. There was a swell little girl there. Name of Leli. In a kind of a—well, strange way, she reminded me of my girl Anne back home. Same way of laughing with you when you feel like laughing; keeping quiet when you don’t. Well, I mentioned Leli in a letter to Anne. And it’s made a terrible row. Anne can’t seem to get it through that bird-brain of hers that little Leli was just part of the—well, of the escape from war. Sort of like the candy bars and movies and cigarettes and stuff that keep us going between missions. And I don’t mean that as any disparagement of Leli, either. Because,” said Jim, his blue eyes suddenly grave, “we need the candy bars and movies and girls like Leli as much as we need the planes we fly or the bombs we drop. But we’re not going to bring the bombs home with us and I don’t think the Lelis would come even if they were asked.”

There are millions of such boys. I pin my faith on them.

In the hospital, all these boys have the pictures of their wives, mothers, sweethearts, kids, on tables where they can see them. They show them to you, first thing. Not their bars, stripes, decorations. Nor picture of some mademoiselle from Armentieres. Nor even pictures of their favorite pin-up girl. No, pictures of the home folks. They’re interested in picture people, glad to see us. But I don’t think they care much about our giving out with the glamour. (That’s been my experience, at any rate— with Betty Grable, it could be different!) The way I figure it, Hollywood, to most of them, is awfully remote. And they’ve had their fill of remote places. And they’ve been near enough to the eternal stars to make glamour as such seem pretty ersatz. What it all adds up to is that, by comparison, nothing really matters to them except their homes and their families. Certainly, it’s not until we start asking them questions about their families, become merely sympathetically listening ears for their tales of the homes they love, that their eyes brighten, their tight mouths relax—and they’re off!

Nor is it only the wounded men—of whom skeptics may ask, “Where else can they go but home?”—whose sole aim it is to get home, as often as possible and, duty permitting, for as long as possible.

“What made you think up such a story?” I asked him.

Another stalwart wrote the girl with whom he had been “keeping company” for five (extremely exasperating to her, no doubt) years that, if he could get a leave, he would come home and marry her. “Nothing,” he said, with what would have been unforgivable cruelty if it hadn’t been so naively desperate, “nothing is too much to do for a glimpse of the old home town.”

When they get home—or so I’ve heard from many quarters where furloughs are handled—they pull every wire they can legitimately lay hands on, to stay home as long as possible. Among the most popular appeals for extensions of furlough are: A change in his business which makes the soldier’s presence imperative; a new baby expected at any moment; the need to stay at home for a few days (or weeks) after the new baby arrives in order to take care of the older children; threatened operations on Junior, Grandpa, Aunt Min. These are in the majority. For if a reputable doctor will wire a serviceman’s C.O.: “———’s son threatened with a mastoid. Advise father’s presence;” or “———’s wife liable to have difficult labor. Strongly recommend soldier’s presence”—the service man stands a dandy chance of having his furlough lengthened.

While on this subject of home, I have two friends, Mary and Ralph, a married couple who live in a modest little house in Connecticut. A few months before the war began, I spent a week end with them. Proud as any caliph, Ralph showed me around “the place.” He said, “We love this little house. Sure, it would be easier for me to live in the city, near my office. Cheaper, too. But see, there’s a brook in the back yard, room for a garden and some pets and the country air’s good for the kids. So, what the heck, it’s worth it.”

At that time, it might be argued, Ralph’s case didn’t prove anything since we were not at war and Ralph hadn’t had his normal tempo of living fiercely upped and accelerated by combat duty.

However, a few months ago, I visited Ralph and Mary again. Ralph was home on furlough (most of which he spent painting the kitchen and bathroom, patching the shingled roof). A veteran of many campaigns, his uniform was decorated with many bars and stripes and further ornamented by the Distinguished Flying Cross. When I spied these rewards of valor and said, “I wish you’d tell me—” he brushed it off, saying, “They were all good shows and good fellows. Some of us rode with Lady Luck.” Then proudly he again showed me around “the place.” The patch of earth which had been “room for a garden and some pets” was a Victory garden now, guarded by two responsible looking cockers, Pilot and Co-Pilot, commonly known as Pi and Co. The banks of the brook were bright with purple and white iris. “ ‘The flags of home,’ Mary calls them,” Ralph said.

“It takes every cent we can scrape together now,” he went on. “My pay and what Mary earns taking care of some of the defense workers’ kids to keep up the payments. But, what the heck, it’s worth it!”

Which was, simply and sincerely, a reaffirmation of one of the deepest and oldest of human values—the love of home.

There are millions of Ralphs. I pin my faith on them. And on all their comrades—in the air, on land, on the sea and under it—in the armed forces.

And on their women. On their wives and mothers and sweethearts and sisters and daughters. You bet, on their women, for we are deserving of faith, too.

A few months ago Flight Lieutenant Stephen came home, blinded. He had been a long time in the hospital. When he came out, he was depressed to the point of suicide mania. A writer, he felt that he could never work again, he was a discard. A couple of months later, he was studying Braille and back at work, dictating like crazy, his own man again. His wife explained the amazing rehabilitation.

“The first night Steve was home,” she told me, “we went for a walk after dinner as had been our habit. It was a temptation to take his arm, guide him. But instinct warned me to let him take mine so that he could feel he was still taking care of me. Believe it or not, Mary, that one seemingly trivial little gesture turned the trick.” My friend added, thoughtfully, “We must not lead them. . . .”

I have faith in woman’s instinct. Faith in its integrity and in its tenderness. Faith that it will find a way to touch the broken bodies and spirits of men with healing fingers.

There seem to be two schools of thought about our fighting men. One, that the men who have invaded Normandy, bombed Tokyo and Berlin, grappled, face to face, with death and danger, known the excitements and adventures of leaves in foreign lands, will not want to settle down to humdrum, routine lives again, at home. The other that, as John Hersey put it in his beautiful, moving book, “A Bell For Adano,” “The war aim of most men is to go home.”

To my way of thinking, the chap who said to me, “I’m sorry to be out while the other fellows are still in there, doing the job. But gosh, when I think that, pretty soon now, I’ll be with the Missus again,” answered both “schools.” They want to be in there while the fight is on. When the job is done, they’ll want to return to the homes they love, have been fighting for and, by golly, will come back to—on the double-quick.

There are millions of such boys and such homes. I put my faith in them.