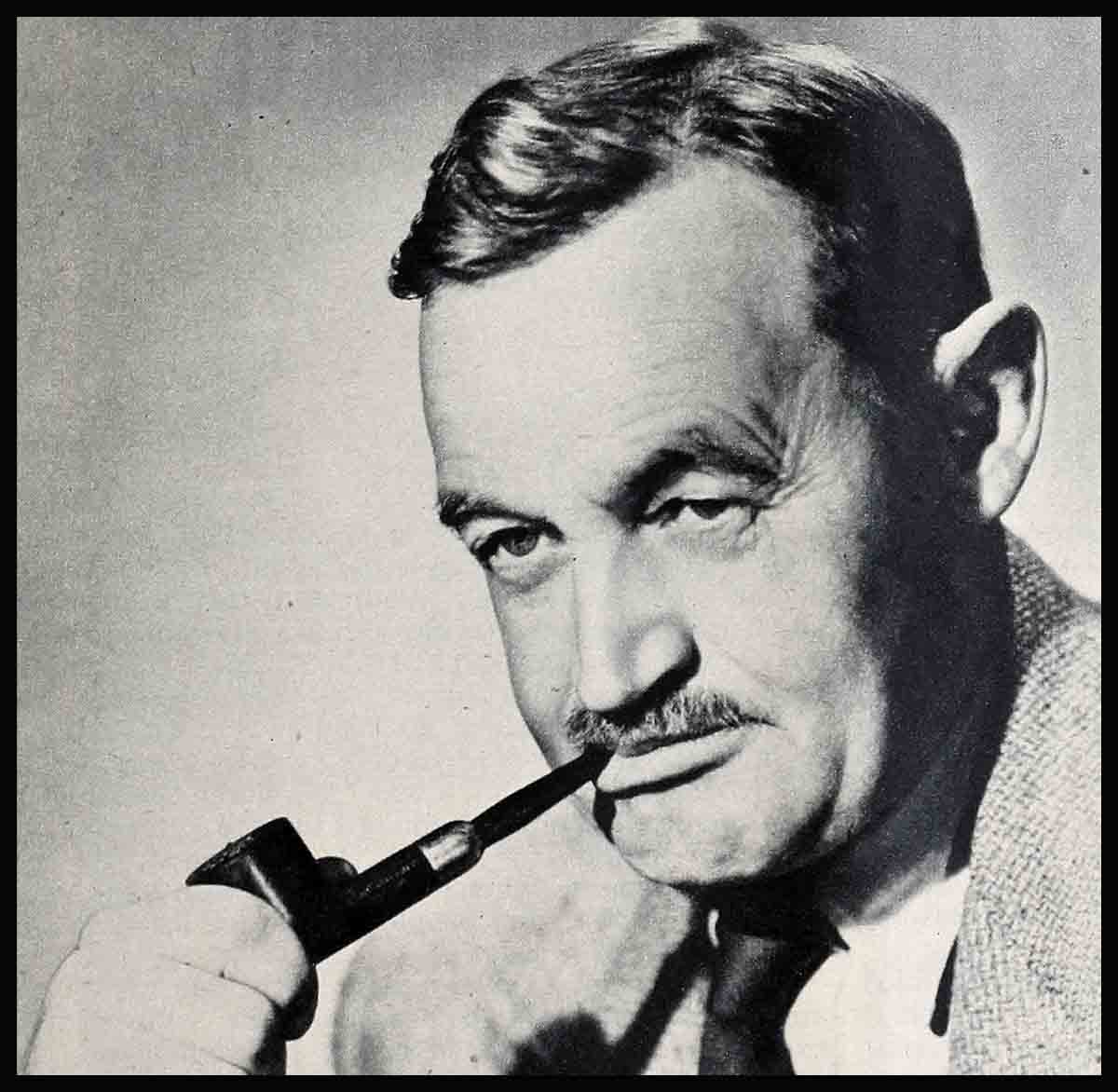 Once Was Enough For Me—Barry Fitzgerald

I suppose sooner or later every man wants to take a few minutes out from his cares to sit on his front porch and rock—and think. And that’s exactly what I’m doing now. It’s a clear, sunny day. A warm r breeze is brushing my face lightly.

It is quiet. My eyes feel heavy. And I feel at peace. At peace for the first time in many weeks.

I think every man takes stock of himself some time in his life. I never thought I’d have to. I thought I’d just be able to go on my quiet, steady way without having the problems that go with too much success. But then came “Going My Way”—and the Award.

Naturally, I am pleased that my work in “Going My Way” was liked. I am glad my role brought joy to so ‘ many people and took away their cares. But I didn’t know it would do so much to me. I didn’t know it would add to my responsibilities, tear my life out from under me. Nor did I expect it to throw me into a world I did not know—and did not really want.

That night when I was given the Oscar, for example. I remember it well now. It was like a climax to a life that seemed strange, alien. It was a thrill, yes, but it was also a turning point in my life. There was a quickening of my pulse as I walked down the darkened aisle and stepped on the glaringly lit stage to receive my Award. It was a great satisfaction to me to know that I had done a good job. But I found it hard to believe that it was actually I, Barry Fitzgerald, who was being given this honor. It was as though I were sitting in the audience watching someone else being given that Award under a brilliant light.

There was a catch in my throat, a lump that blocked out words, when the moment came. Partly because of what the honor meant but more because I felt, deep inside of me, that this moment would never again come to me. Because I knew somehow that never again would I permit the curtain of such success to rise on me.

I know now I do not want great success. It puts up too many barriers to happiness. It fills me with a strange desire to run away.

That may sound amazing to some people. Everyone strives for success and fame. At least, everyone thinks he wants it. But once he has it, is it as important as he thought? Not to me.

I’m not a young man any more. I don’t want acclaim and attention. I just want to be let alone to lead the kind of life that has meaning for me and to have time to relive my moments of great happiness.

And what am I thinking about now? Well, many things. Big things. Little things. But all important. Important because they are me.

It seems I can hear the sea near my home in Ireland even now. The crash of the waves against the ragged coast rings in my ears. And I go back to the days of my childhood. I don’t believe in any man’s going back too much to the past, but once in a while he wants to recapture the moments of true happiness that come only in childhood.

. . . I’m standing down there by the sea. I’m playing among the rocks and watching the endless sea go back and forth. My friends are there with me. Suddenly one of us yells, “Let’s go for a swim.” Off come our clothes and we are diving into the water. The water is cold, but it makes us feel good and strong inside. It fills us with a sense of freedom, of abandon.

The lazy days at the sea. The health and excitement of being young, of not worrying about today or tomorrow. That all meant happiness, the kind I search for now as I sit here on my front porch—and find so difficult to recapture.

My eyes blur and another picture comes to mind. Again I am back home in Dublin, just a boy. I’m standing by our house while my mother fixes dinner. I can see all around me the lush, green, pleasant countryside. The rolling, gentle hills. The peace and contentment of a country at rest. Something draws me away from my home and out into those fields. The brisk air hits me and drives me on. I am walking and walking. The sun is sinking below the hills, but still I walk. Oh, many is the day I have gone for these strolls, have walked more than thirty miles in one day.

There are no green hills now. The sea is only in my heart. Something has gone from my life—and I can’t help missing it.

I have other memories. I can see so clearly a group of young boys breaking happily from school for the summer vacation and rushing off to a field to play a fast game of rugby football. I was a little fellow for the game. Most of the boys at first were sure I could never be a good player. I’ll never forget the day they made me a part of them and their games. . . .

The phone inside is ringing now. It rings all of the time since the thing called success paid me a visit. But I won’t answer it. More people have suddenly found they know me. I like people, but I prefer to hang on to the friends who were my friends long before all this happened to me.

I realized what I wanted from life first when I was making my last picture, “And Then There Were None” in which I am made a star. For a long time in Hollywood I could play small parts and do the work I had liked—acting. No one thought I was important. I was allowed to live quietly and I liked that. But then came the change. And the loss of daily solitude that I feel is important to everyone’s health.

No, I’m not ungrateful for what has been given me by Hollywood and by America. I value the friends I have made. Certainly no man could overlook the help given him in a picture by such a person as Bing Crosby. Working with him made my own job so much easier. And knowing him has been one of the finer things in my life since I came to Hollywood.

I’m convinced that America is a land of opportunity, for where else could a man of my age after working for years suddenly find himself at the top of the heap? Where else does success come as swiftly to the old as to the young? But I know I am not the kind of a person who should have great success. It doesn’t fit me. It’s as though I were wearing the wrong size pants.

Funny how a trick of fate can change your life. I think now of my first entrance into the world that was to try to change me. Going back to that day so long ago to the stage at the Abbey Theatre is not a long trip in my mind. But it is a long way in years and in my heart.

. . . I had not intended to go on the stage that night. I just went to see a friend. I remember him now as he stood in his dressing room, all dressed up for his performance that night. Then I can hear a voice behind me saying, “Why not go on the stage tonight as part of the crowd?” It seemed like fun, so I went on the stage for the first time in my life. I went on again the next night. Before I knew what had happened, I was a member of the Abbey Theatre. But I stayed with my job as a clerk. For sixteen years I worked days, going to the theater evenings.

Woulds I have been happier if I had never gone to the theater that first night? If I had kept my civil service job, gotten married and had come home every night with nothing on my mind but an evening by the fire?

The call has just come for me to go to the studio. But there is a little more time for me — and my thoughts.

If I had my way. I’d give up my career. I’d leave the honors and awards to those who have worked harder than I for them, to those whose happiness depends on them. What could further success—if I had it—in pictures do for me? Money can’t bring happiness. Can it even bring security? Or is security mainly peace of mind?

Nor do I want adulation. My fans have been very kind and I appreciate their interest in me. But, after all, I’ve done enough in my life. I’ve lived a full, honest life. I have no regrets. I can’t see the reason for going on with something that has brought me money, fame, and success—but not the kind of happiness I treasure.

It’s not that I want to spend the rest of my life sitting on my porch thinking. I’m not usually a dreamer. I still feel there is much ahead for me in other lines, for I have my enthusiasm for life and I have a young outlook. I’ll never be bored.

I’d like to spend more time on sports. I want to keep alert to all that is going on around me. A person may be old in years but there can be youth in his heart if he grows with the times. That’s my point. I don’t feel I can grow any more in my career.

Perhaps I can best express how I feel by an example. It has long been my ambition to go to big cities, to see what makes them tick, to observe and talk to strange people, to be a part of a crowd. To live in such a way I can be just a Mr. Jones—and a happy one. That is no longer possible for me. Success has denied me that kind of freedom. I’m a person living in a goldfish bowl now.

But can I break away and become just another man who disappears unnoticed into a crowd? Not for a while, I’m afraid. I cannot give up obligations and let those people down who have worked so hard on my behalf. It is not possible for me to break the ties that bind me—not yet.

I do not regret getting older. It’s a part of living. It’s the age of contentment, of mature and rich ideals. But you feel much too old when you have to fight a thing that is entirely foreign to you.

Now that you know how I feel, do you think I am ungrateful for what I have gained? Am I falling down on the job that is mine? Am I selfish in my desire to pull down the curtain on my career? Or am I just trying to seize my one big chance for real contentment?

The ashes in my pipe have burned down. The breeze has died away. And a man who searches only for simplicity has left his front porch to return to the now unreal world of the cameras. To the world that beckons uncertainly.

Can I regain from the mist of years the thing that means my happiness? Somehow, some way, I will!