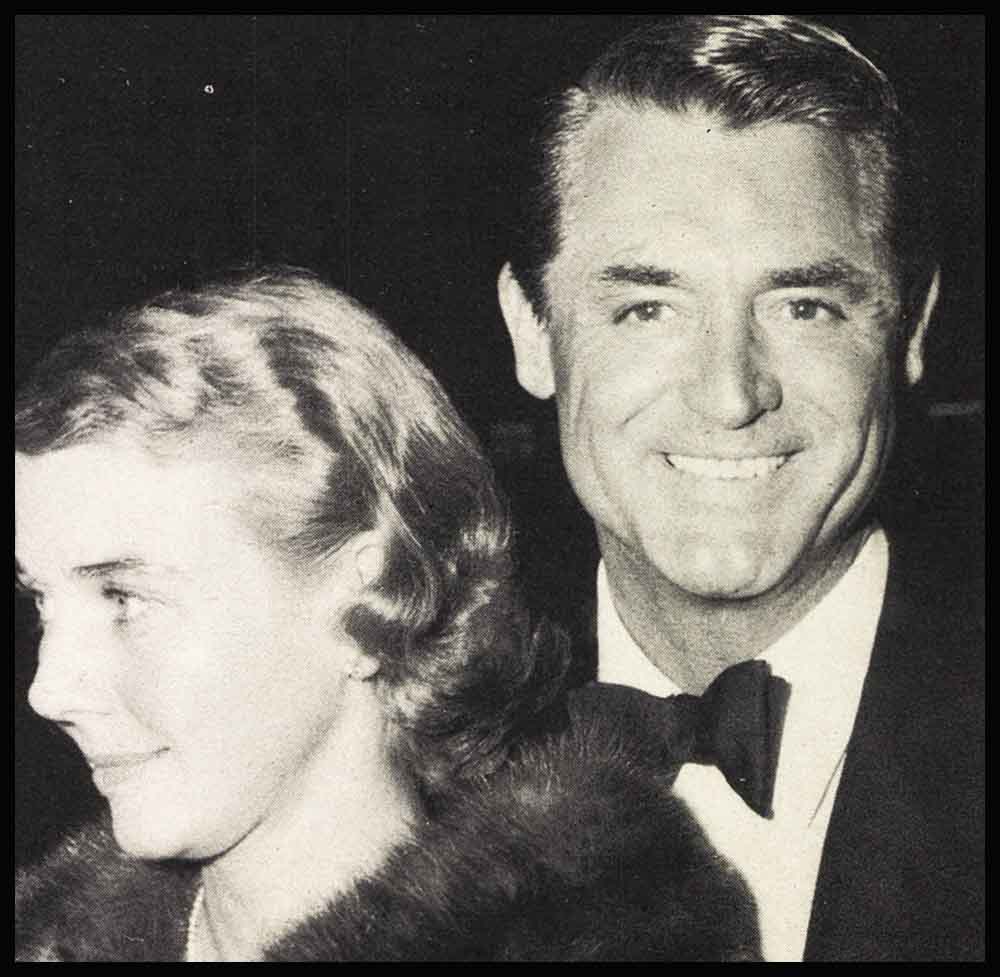 Has Cary Grant Got His Eve On The White House?

It’s part of her job to sit on the sidelines and watch the parade of VIPs at the glittering balls, banquets and private parties hosted by President and Mrs. Kennedy.

She makes out the guest lists, sees that the invitations are mailed or delivered by messenger, prepares seating arrangements with an eye to rank and protocol. Tish, in short, is stage manager of the Greatest Society Show on Earth. And without her able assistance, gorgeous Jackie would have a hard time living up to her reputation as the nation’s hostess with the mostest.

But every girl, in her secret heart, longs to do a bit of spotlight-stealing herself. And that’s exactly what Jackie’s social secretary did on a recent night off from the Presidential Palace on Pennsylvania Avenue.

Tish went to New York to attend what one Cafe Society columnist called “the social event of the year,” the Sutton Theater preview of the movie “The Miracle Worker.”

Now, this might seem like a busman’s holiday. Or, at best, a dull affair compared to the Washington galas that Tish regularly helps produce. But if the preview wasn’t really “the social event of the year,” it was at least a star-studded spectacle.

The show and a huge supper party afterward drew the biggest turnout of Hollywood and Broadway celebrities since “Oscar” night. Tish hadn’t seen such a galaxy of stars since her boss held open house for Frankie and his Rat Pack.

Just about everybody but Liz was there. Movie queens Joan Crawford, Joan Bennett and Lauren Bacall served as usherettes. Marilyn and Kim and Zsa Zsa showed off the latest low-cut styles. Olivia de Havilland and her sister Joan Fontaine were so thrilled they decided to kiss and make up.

Outside the theater, a crowd of 5,000 spectators gawked, cheered and whistled. As Maggi McNellis announced each new arrival, the mob roared and surged against the police barricades. Irene Dunne, Adlai Stevenson, Henry Fonda, Doris Day and all the others got a terrific hand.

But while the movie stars were the main attraction for the sidewalk audience, the stars themselves stared like pop-eyed yokels at one handsome couple in their midst—Cary Grant and tali, blonde Tish Baldrige.

Tish, the unassuming social arbiter, had just scored the biggest social coup of the season. All my herself, without a bit of hetp from the White House, she had won what millions of females would sell their souls for—a date with Mr. Debonair.

For this one evening, at least, Tish knew how it felt to be the center of attraction.

A RIPPLE of excitement swept through the celebrity-crowded theater as she and Cary took their seats. Heads turned, necks craned, eyes widened as the star whispered:

“Who’s the girl with Cary?”

The diamond-dripping, sable-swathed dolls turned green with envy. The movie columnists turned livid with rage because they had no advance warning that Cary had his eye on the White House.

Next day, the society salons of New York, Washington and Hollywood were abuzz with romantic rumors. Park Avenue, Capitol Hill and Sunset Strip all had the same topic of conversation and the same question: Was Cary in a tizzy over Tish?

Caught off guard, the professional gossips were stunned with surprise. But they needn’t have been so startled. Though Tish is neither a movie star nor a famous beauty, she is exactly the type Cary goes for like a cat to cream.

Though he has dated many brunettes and an occasional redhead, Hollywood,s most durable dreamboat is a gentleman who prefers blondes. Furthermore, he likes them slim, sleek and social—not too bosomy or too voluptuous.

The dolls he dated most—Joan Fontaine, Phyllis Brooks, Grace Kelly (before she married Prince Rainier, of course), and others—followed the same pattern. Cary is more at home on Park Avenue and Long Island Sound than on Sunset Boulevard. And when choosing a female companion, he rates Class above Sex Appeal.

Now that he’s shown an interest in a member of the White House “family,” Washington hostesses have been deluging Cary and Tish with invitations to cocktail parties, suppers and formal balls. The ladies who rule Washington Society consider him as big a catch for these functions as the President himself.

“I do hope Mr. Grant becomes a regular caller,” one member of the White House domestic staff confided to a friend. “He’s so much more distinguished than those other Hollywood people who are always cluttering up the place.”

And a famous Capitol hostess was overheard to exclaim: “Wouldn’t that gorgeous Cary Grant make a perfectly beautiful President?”

FOR all of you ladies who may feel the same way, here’s a bit of bad news: Cary can never be President because he was born in England. (Real name, Archibald Leach.)

But if he starts chumming around with the Washington social set, who knows how far he might go? With his charm, sophistication and international appeal, he’d make a perfect Ambassador. Or maybe even a Secretary of State.

The State Department surely could use a global trouble-shooter with proven ability to win hearts and influence foreign females. Once the fabulous Grant charm was turned on Madame Khrushchev, say, or Madame DeGaulle, these ladies certainly would begin badgering their husbands to do whatever Cary suggested. And the cold war would soon melt away.

Now 58, Cary has outlasted all other male movie idols and become a living legend. When he came to America some 35 years ago and began emoting on Broadway, the big names were John Gilbert, Ramon Navarro, Rudolph Valentino, Ronald Colman, John Barrymore, Douglas Fairbanks Sr.

Later, he had other competitors for the feminine vote—Clark Gable, Spencer Tracy, Gary Cooper, Errol Flynn . . .

But Cary, like a modern Ponce de Leon who has really discovered the Fountain of Youth, keeps right on going as if he is ageless. Today, he is rich, famous and just as hand- some as he was three decades ago.

For example, in his most recent movie, “That Touch of Mink,” he plays the love interest of darling Doris Day. Their love scenes, filmed in Bermuda, reportedly were so realistic that Doris broke out in a heat rash.

“Touch of Mink,” incidentally, was the 25th Cary Grant movie featured at New York’s Radio City Music Hail in 26 years — a record unequalled by any other star.

When Cary recently signed for the part of Professor Higgins in the movie version of “My Fair Lady,” he captured the acting plum of the year. His choice was a bitter blow to Rex Harrison and Richard Burton, both of whom badly wanted the role.

A British actor named Kenneth More was offered the Col. Pickering part, but he turned it down with the unsporting comment: “It’s an old-man part and I’m much younger than Cary Grant.”

Kenneth More (whoever he is), undoubtedly is correct in his calculations. But if he lives to be 200, he will never be another Cary.

Grant’s power over the curvier sex is practically indestructible. Though he’s almost 60, he has as many teen-age fans as Elvis, Fabian and Bobby Darin combined. The bobby-soxers still go for him just as their mothers and grandmothers did—and still do.

How does he do it? What’s the secret of his perpetual youthfulness? These are the questions Cary gets asked by almost every interviewer.

He owes his youthful looks, good health and slim, trim figure to a combination of things: Health foods, strenuous exercise, yoga, even self-hypnosis.

His third wife, Betsy Drake, got him interested in hypnosis. After reading a book on the subject, the blonde beauty hypnotized Cary and cured him of both smoking and heavy drinking. Now that Betsy’s no longer around, he hypnotizes himself.

“I don’t do it as a parlor trick,” he explains, “but I employ a self-hypnosis when I feel it’s helpful. I can shut off all sensation in any part of my body after a few moments of intense concentration. If I want to take a nap in my dressing room but the set is too noisy, for example, I simply make myself deaf to the outside sounds and put myself to sleep. Or I shut off sensation on the side of my mouth the dentist is working on. It comes in quite handy at times.”

Betsy also introduced him to lysergic acid diethylamide (LSD), a drug used by many psychiatrists to achieve a sort of “instant analysis.” Dr. Mortimer Hartman, Grant’s psychotherapist, calls it a “psychic energizer which empties the subconscious and intensifies the emotions a hundred times.”

Both Betsy and Cary began experimenting with LSD about four years ago. The drug changed their personalities, ironed out their emotional kinks — and, incidentally, broke up their marriage. When Betsy discovered she was no longer dependent on Cary as an emotional crutch, she walked out on him.

But Grant didn’t waste time grieving. For LSD had opened his eyes to a wonderful future instead of a doddering old age.

“When I was a young man,” Cary now say s, “I deliberately tried to be charming. It was one of my actor’s tricks. Now I know no man can be better than himself. I was always professing a knowledge I didn’t have. I was an utter fake, a know-all who knew very little. I was very aggressive and bad-tempered, without the courage to be physically aggressive.

“Now, thanks to psychiatry and LSD, everything is changed. My attitude towards women and life is completely different. I don’t intend to foul up any more lives.

“I know about women now as I never knew before. I know that a man and woman deliberately spoil something between them that is beautiful. You know how it is. A woman says, ‘I wonder what would happen if I made him a little bit jealous.’ The man says, ‘Who was that fellow I saw you with on Thursday?’ And it starts.

“We cannot stop hurting ourselves and each other by destroying the one thing we are all dying for—love and affection.

“Lonely men spend half their lives trying to attract women and all the time they are making it impossible to get the affection they so desperately need.

“It is really so simple: Stay still and girls will flock to you—beautiful girls needing affection. If a man will simply recognize this need and show them that he has the same, that is all he has to do.”

So there you have it, men — a secret as pricesless as the secret of eternal youth. Cary Grant’s secret of success with the lovely ladies, a knack which also keeps him looking so young.

“I could be a good husband now,” Cary confides. “For the first time in my life, I am emotionally prepared to be in love.

“And I think that if I were married again I would like to become a father.”

Why not? Clark Gable’s first child was born shortly after Clark died at 59. Charlie Chaplin is still turning them out at 73.

Judging by his virile appearance in public and on the silver screen, Cary still has plenty of what it takes to be a proud parent.

Only one of his friends is skeptical—his last wife, Betsy.

“I don’t know if he’s ready or not,” she says. “I’m not about to sit down and engage him in that discussion.”

Maybe she should. If Cary goes to Washington, as another famous Grant did once before, Betsy may never get a chance to find out what a good father he might be.