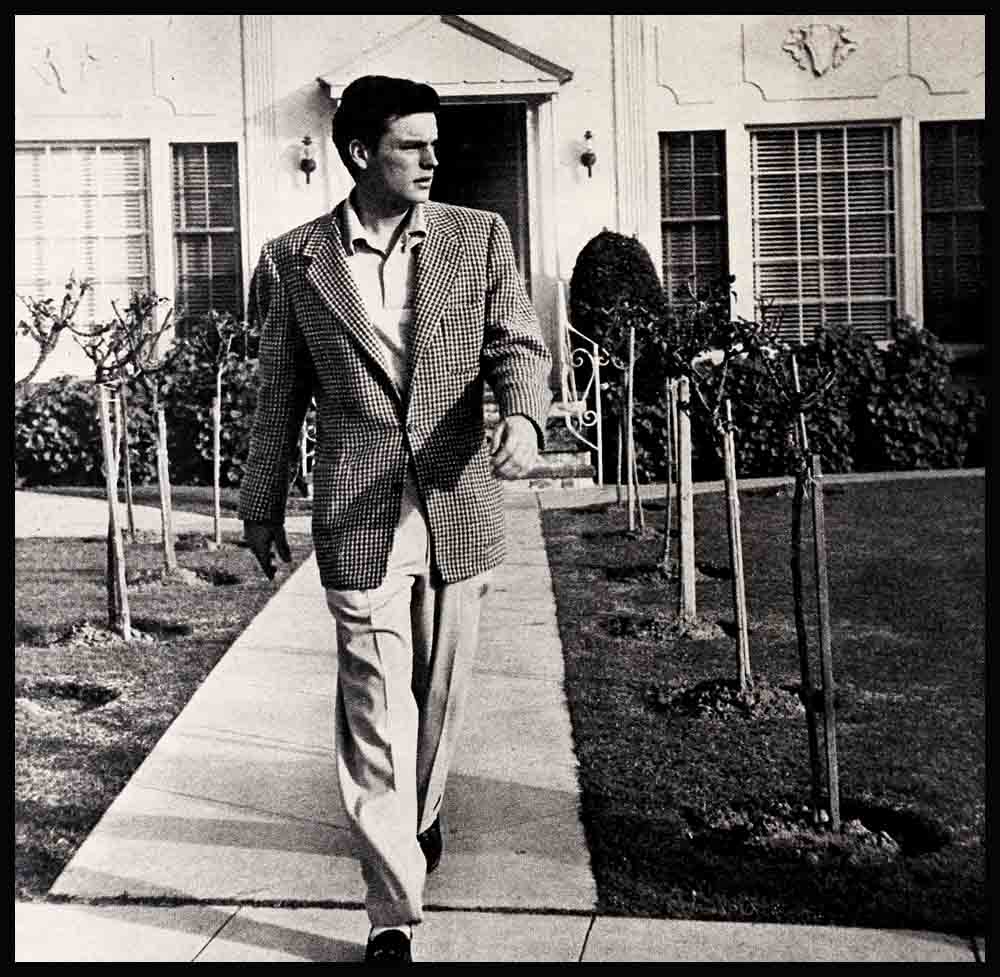 Bachelor On A Budget

Bachelorhood is more than just a state of being. Ask Bob Wagner. It can be a whole career.

Today Bob’s rapidly earning his degree as Bachelor of Arts . . . with scars to show for it. Such as those earned while trying to force three saddles, a pair of skis, assorted tennis racquets, guns and fishing tackle—and his entire wardrobe into one closet.

Today he can shake his head amusedly at the trustful way in which one R. J., Jr. approached this whole new adventure in living. As for instance, the sunny afternoon when he mused thoughtfully that “having an apartment should be very interesting. It will be the first time I’ve ever had to pay the rent, sort the laundry, and just keep house in general.

“I throw things around,” he explained, “and I don’t pick up too well. But that I can learn. This should really open up a whole new thing for me!”

The whole new thing first descended on Bob when his father, Robert J. Wagner, Sr., and his mother decided to build their new home in La Jolla, 120 miles from the Twentieth Century-Fox studios as the sea gull flies. For the first time in his life, R. J., Jr. would be going it alone.

Furthermore, the comforting speculation that if it didn’t work out, he could always go home to Father was dissolved when it was determined that Father and Mother would instead be coming home to Bob. His dad’s business interests in Los Angeles would necessitate their popping in and out of his new home.

In spite of this, Bob refused to be dismayed. Batching it would be a breeze! A guy just found himself an apartment and moved in.

“I’d been looking for an apartment for some time. Since my folks would be staying part-time with me, I had to get one big enough for all of us.”

At the studio one day, Dan Dailey came up with a possibility. “The girl who lived in the apartment below mine just moved out,” he said. “Nice place too. Why don’t you go take a look at it?”

The landlady didn’t live on the property, but Bob could “go right over and see it,” she informed him over the phone.

“We’re painting the bedroom, and my husband is there now.”

To the busy man who answered the door, the boy with the eager smile and the careless haircut looked like somebody’s kid brother. As Bob says, “I’d rushed right over in my levis—and with an okay-where-is-it approach. But the landlord was in no hurry!”

With a quick eye, Bob surveyed the white stucco building, the private entrance, the well-kept grounds, noted it was a corner apartment, and said he understood there was a vacancy. Adding, “Have you rented it yet?”

The landlord just kept eyeing him. “Do you go to school?” he asked.

‘I’m working at Twentieth Century-Fox,” said Bob, and noting the door was opening a little wider, quickly got a toehold inside. “Until then it was just the front doorstep,” he grins.

inside, the landlord went back to work, keeping one eye on the bedroom wall and the other wary one on Bob. “Right away, I knew I liked it,” Bob says now. First, he noticed the fireplace. Then the large front room. The large bedroom. The large closet. Well, it looked large, then. The living room, he noted, would go great with his mother’s cocoa drapes, if he could get them. There was also a closet in the living room where he could put a roll-away bed. “I could see all the possibilities in it. Which was more than the other fellow could see in me.”

“How much is it?” Bob asked finally, still pacing it off.

But it was higher than Bob could go. He began selling a little harder, even indulging in a little name-dropping, mentioning casually that a friend of his, Dan Dailey, had an apartment there. “Dan’s a nice guy,” the man commented, thawing a little. “And about that time, as though on cue, Dan, who’d come in, sent his houseboy down to say ‘Hello’—and this kind of warmed things up for me. . . .

Signing the lease, Bob thought, was a history-making moment—like signing a Declaration of Independence of his own. Then he read the small print, and he was sure he was signing away all the freedoms his forefathers had fought for. There must be no playing of the radio after 10:30 p.m. No dancing. No parties. No pets. No noise.

In this respect, his landlord was still luckier than he had reason to know. Only a few months before, for instance, Bob would have been moving in complete with tuba, rendering “The Stars and Stripes Forever” day and evening. Then there was another period when, determined to be prepared for any eventuality in a musical, he had toyed with the trap drums.

Bob took a two-year lease on the apartment. Coincidental with moving day, he’d started working with Barbara Stanwyck and Clifton Webb in “Titanic”—which seemed descriptive of his personal chores at that time. “I had to move everything: my clothes, furniture, records, books, the works. We’d just started the picture, and I’d been working four straight weeks already on another with no time off to pack. Things were real crazy. But when you have to move. . . .”

You move. Fortunately, his parents hadn’t gone yet and Bob could have the help of a very willing accomplice, his mother’s maid, Vera. She was a big help, too—in purloining as much “loot” a? possible from the family home and settling it in Bob’s new quarters.

“Vera really stripped the place of everything she could find for me,” Bob grins now. “She would have given me the whole joint, if we could have gotten away with it. She swiped all my father’s cigarettes—and was my mother surprised when she saw her best frying pan take off!”

A van moved all the furnishings Bob and Vera couldn’t manage. When the movers didn’t send him a statement he kept wondering about it, until Dan Dailey hailed him at the studio one day. “Look, I believe in being helpful. But here, pay your own bills.” Which was when Bob discovered the van company had sent the bill for thirty dollars to Dan’s apartment.

Bob’s new quarters, hectic as the whole operation has been, are in very good taste, warm, spacious and livable. The living room walls of desert-beige and the matching carpet, the mahogany-frame couch “the landlady left for me,” harmonize beautifully with his mother’s best cocoa-colored drapes.

The dining room was already done in blue, with small-figured wallpaper and matching blue rugs which provide a very acceptable background for the blond oak dining set Bob’s folks contributed.

“I had my own bedroom furniture. And Dad had a lot of football stuff: trophies, cups, statues and such—he’s a fan of the Detroit Tigers—which help take care of the mantel.” Which Bob further decorated with a large framed portrait of his dad and mom and himself—to make it feel more like home. “Of course I still have some shopping to do. I want a radio-phonograph, and I need a couple of pictures here and there.”

The kitchen’s done in blue and white too, and Jeffrey Hunter provided the most necessary item to furnish it—“A Wolf In Chef’s Clothing,” a very well-illustrated cookbook. As Bob puts it frankly, ‘I’m a whizz at making breakfast. But I’m a dud at dinner. I really get fouled up.”

This he discovered the night he christened the kitchen, making dinner for one, believing in all fairness that he should be the first casualty. This would just be a sort of happy rehearsal anyway. He would just follow the book and really let himself go. Two hours later, he conceded he would have been wiser to let the dinner go.

His menu, steak and baked potatoes, seemed simple enough on the surface. “I got the cookbook Jeff gave me and opened it at ‘How to Bake a Potato.’ It gives all the details and illustrates the whole procedure. You just follow the pictures.”

He followed instructions faithfully. “But forty-five minutes later . . . nothing. The potatoes were still hard as rocks. I must have missed a picture—of me pre-heating the oven. . . .”

As for the pan-fried steak, “There were illustrations for this too, but I smoked the whole place out first thing. Finally I decided to heat up some enchilladas I had found in the frozen-food department at the store.”

Then more happily, “But I’ve found a wonderful deal now. There’s a place called ‘The Casserole’ where they deliver barbecued chicken dinners and such with all the trimmings. It’s real great,” he says enthusiastically.

Bob Wagner’s “sense of truth,” his ability to adjust, his eagerness to learn—and his eagerness to accept what others have learned—have helped immeasurably in adjusting to the drearier details. His natural friendliness encourages in others the desire to help him.

For instance, a new friend of his who works in a cleaning shop close by, comes over once a week, goes through the apartment, decides what needs cleaning and pressing and takes full responsibility for it.

Groceries? “I just call up Clete (Clete Delperdang) at the Westhills Market, a few blocks from the apartment.” Clete, it seems, once had a market over in the Village and has served the Wagner family since Bob was a tow-head of eight. By a happy coincidence, his market is now four blocks away.

Then there’s a fellow who assists him in the selection of fresh vegetables, when Bob, a familiar, levi-clad figure, makes his way around the market to the accompaniment of the smiles of women shoppers who “watch me pushing the basket around. We all say ‘Hello’ and keep saying ‘Hello’—and they slow down and wait to take a look at what’s in my basket,” he grins.

As for going to work, it couldn’t be simpler. “Only a four-minute drive to the studio—of course I don’t kid around— allows for getting a little extra shut-eye in the morning too.”

All in all, as he qualifies modestly, ‘I’m doing pretty good—now and then.” Although he admits there was one bewildering interval when the neighbors suspected the new tenant of leading a double life. One of them finally stopped him with, “Say, what happened to that other young fellow who moved in here?” Used to seeing a blond guy in levis breezing in and out, they were a little confused when he came home one night with black curly hair and swarthy skin. Some of them still don’t know he’s all made up for the role of a Greek sponge fisherman in “Twelve Mile Reef,” a script first bought for Marlon Brando—which gives you an idea of the value Twentieth Century-Fox places on Bob Wagner today.

So following his performance in “The Silver Whip,” and the stature he gains in “Titanic,” Bob Wagner, today’s fastest rising young star in Hollywood, gets full-fledged stardom in “Twelve Mile Reef.” While admitting, “I’m plenty excited about it,” he’s a little -worried, too.

What with his new stardom and new bachelorhood, life is fairly raining responsibilities on Robert Wagner today. Despite which R. J. is an energetic, hard worker who insists on carrying his own weight. But he still measures his accomplishments with a wary eye. And to the all-important question, Bob told reporters, “Look, I’m not sure I can manage an apartment as yet—much less marriage.”

That’s a remark he now looks back upon as the classic understatement of all time.

Modesty, however, will probably get him nowhere. Or perhaps everywhere. It all depends on the point of view.