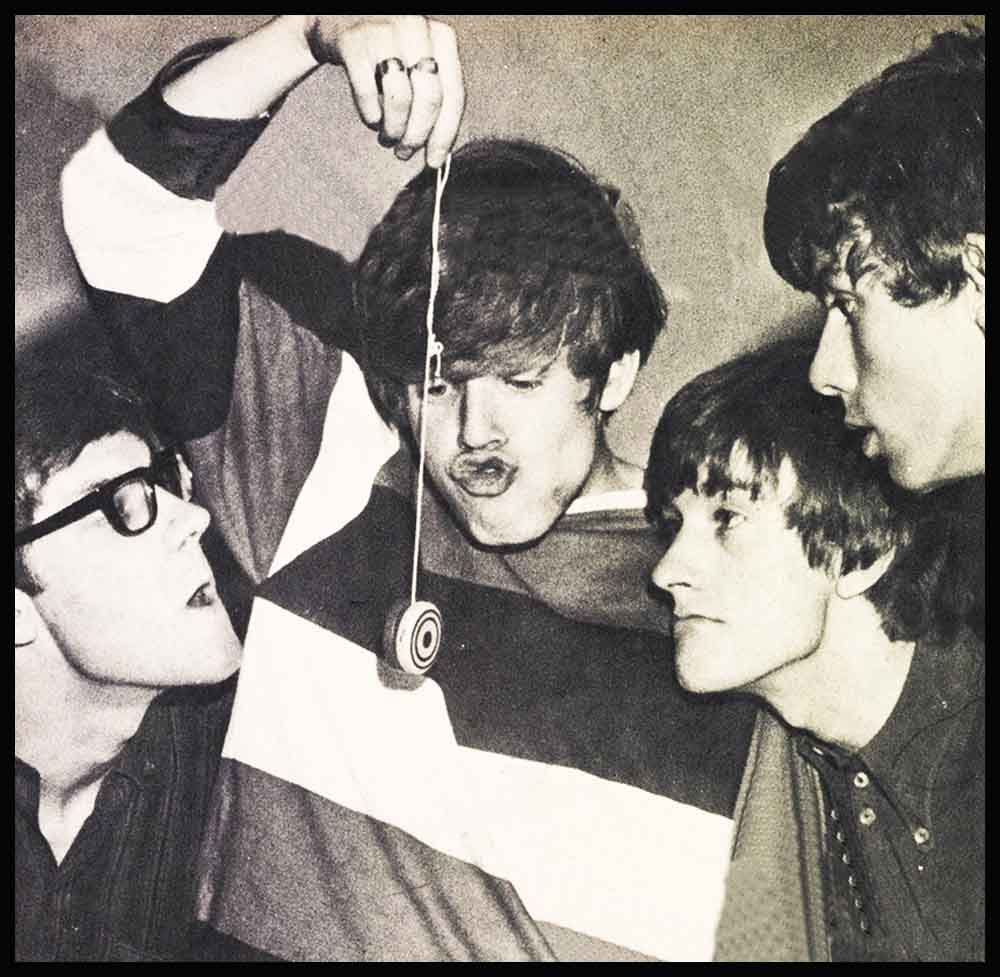 The Way Herman’s Hermits Get Their Kicks

It was their new MGM movie, Hold On! (There’s No Place Like Space), that brought Herman’s Hermits from England for a month’s stay in Hollywood—but they had a much wilder time on the earth plane. One of them rented a motorcycle and the others quickly followed suit. Everyone became amused that the boys were incontrollably hooked on the fast life. They even got more kicks out of their cycle rides than the big bashes they threw for their fans and friends at their huge, rented mansion. They really proved they were great guys when they all flew their folks’ out to the coast so they could share the excitement of their success. When you talk with Herman’s mother and little sister, it’s obvious how proud they are of him.

Herman always steals the show. His mother reports that “Peter (his given name) always got on marvelously. He’s never been shy, and he’s always been the center of attraction.” Peter decided to parlay this God given magnetism into something big at the age of 11. He was studying at the Manchester School of Music when he heard of auditions for a TV production of Knight Errant. He landed the part and others in Coronation Street, and Saki on the British network. His role in Knight Errant required he sing, so Peter began singing lessons. Soon he began pop- ping in on the local youth club to tune in the latest sounds. One night a group called the Heartbeats was short a singer and Peter stood in—to stay. Soon the group christened him Herman and the others naturally became the Hermits because “it went together.” However, the Hermits continue to call him Pete and his parents like Peter. Herman prefers to be called Herman. It’s evident now Herman’s sure of his success but the unaffected lead singer has not let it dampen his honesty or change his love for others.

“There was a time in his life,” reminisces Karl Green’s mother, “when I never saw him without his gun belt and toy guns. Even at mealtimes he’d have his gun holster, and if TV was on showing a cowboy series, out would come the guns, and Kari would be killing them off, right and left. He even slept with guns under his pillow.”

To this day, shaggy-haired, amiable Karl Green remains intrigued by guns, but no longer sleeps with them under his pillow. His interests are much wider now, although Herman says girls occupy a good part of Karl’s thinking if not his time. With ali the hustle of barnstorming tours, recording sessions and movies (the Hermits have already completed a cameo in When The Boys Meet The Girls for MGM and finished Hold On! (There’s No Place Like Space, in which they star and sing 9 songs), there isn’t much opportunity to do much more than dream about the opposite sex. Though the schedule is rough, Karl—and his fellow Hermits—abide by a motto that bespeaks their spirit of cooperation. It’s simply, “Anything else, luv?”

Karl, for all his professed interest in girls, is still a bit self-conscious. “He was very affectionate when young,” reveals Mrs. Green, “but now he thinks it’s a crime to show affection.”

And when considerably younger, Karl was also a mischievous imp. At 2, he was packed off to nursery school so that his mom could “recuperate.” He made the most of it, loved the place, and graduated knowing his ABCs backwards and forwards and his Mother Goose inside and out. But it was to be expected. Kari was walking at 10 months and talking a blue streak at 18 months.

Karl’s future was quite accidentally cemented at age 10. He came into possession of his first guitar. “it was really because everyone else seemed to be getting one at the time,” he remembers. Self-taught, he played with the Balmains, managed by his brother, and then joined the original Heartbeats.

To Herman, who is indulging in the delicate art of character analysis with greater frequency and greater precision, Keith Hop-wood, the group’s rhythm guitarist, is “the shy one.” He withdraws from controversy, shuns argument, and has no difficulty being easily satisfied. Because of this introversion, Keith is at the stage where he sometimes begs off going out with the other boys, preferring to stay back with a good book.

But Keith Hop-wood is no stick-in-the-mud. He likes to dress simply and elegantly in hopes of pleasing the gently feminine types he likes best. And his passion for picture taking makes him one of the most actively attentive Hermits on tour. He’s rarely seen with- out his camera, and maintains a very up-to-date scrapbook to keep the folks in Manchester always aware of the wonderful things that happen to Hermits.

But not everything about being a Hermit is supercalifragilistic-expialidocious, especially if you’re on the shy side. Keith reminds us of the bedlam of the last U.S.A. string of one-nighters and a real moment of panic. On one stop, the crush of the crowds was so overpowering that Herman’s fabled milk tooth was knocked out. Oddly enough, Herman and the boys felt that this weird tooth was the key to their popularity. Its loss now signalled the end, or so they thought. But enterprising fans put a replica of the tooth on a chain, and Herman, his tooth, and his Hermits still reign supreme. Even Keith is getting used to all the frenzy.

While Herman can be safely called a chatterer, Barry Whitwam is a listener. “Barry’s the quiet one, he likes to take it in,” all agree. But quiet Barry is the last to duck out on a good time. He loves fun and he loves girls, but his tastes follow suit with the Hermits—to those quiet and feminine types. In fact, one of the things he hates as much as breaking a drumstick is skin-tight jeans on girls.

Barry is taking success pretty much in stride. He absolutely loved sharing the gold record for Mrs. Brown You’ve Got A Lovely Daughter, and wouldn’t mind if the same good fortune overtook Just A Little Bit Better, but Barry, through all the adulation, continues to be a genuine, unaffected teenage tycoon. He’s still as close to his family as he ever was, and he’s still a bug for tinkering with cars and boats in his precious spare time.

Barry had a crack at hairdressing, but threw in his comb to join the Hermits.

“He’s determined. He’s a stick- er,” insists Herman when talking of Lek. And Lek, who has two years of Civil Engineering under his belt (University of Manchester), is determined to resume his studies as soon as time permits.

He’s the one Hermit who might have become a real recluse had he not been rudely interrupted from his studies by Barry. Needing a stand-in, Barry persuaded Lek to carry on. He did, and officially joined up, after failing his exams.