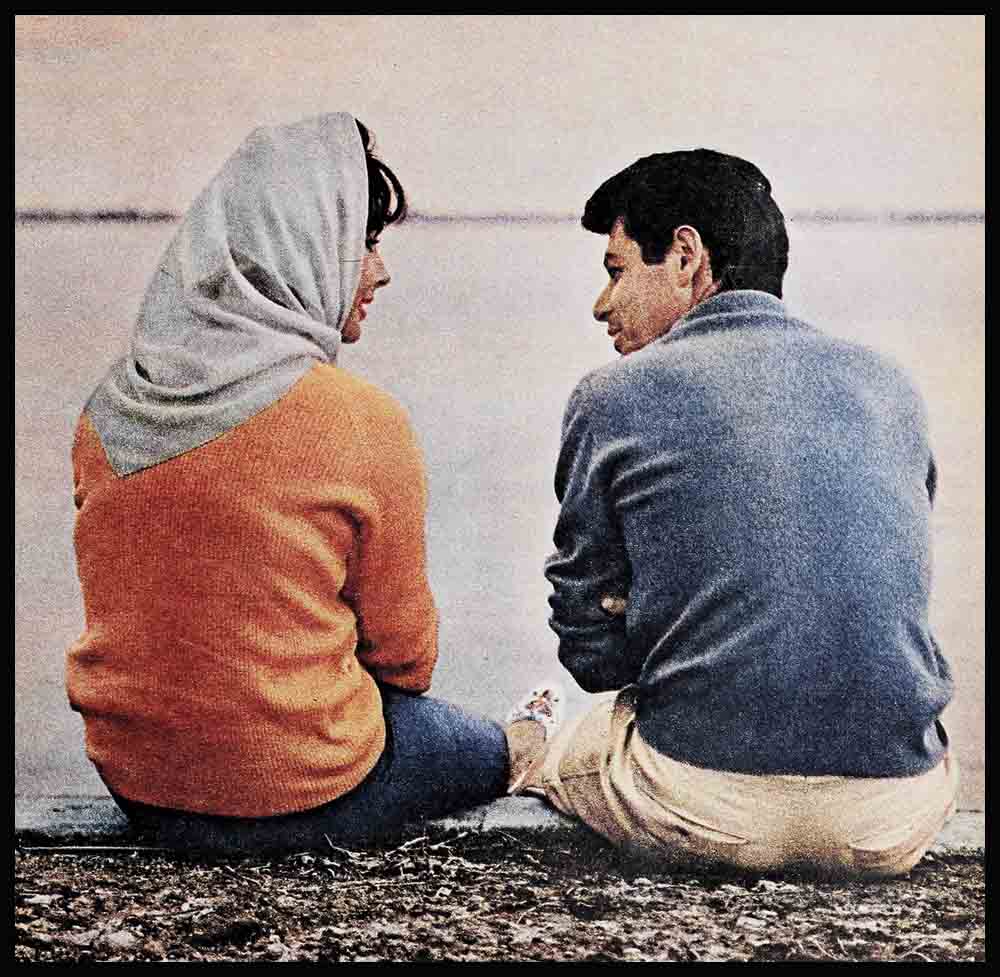 Get The Scoop Of The Year!

From our European correspondent comes the most heart-warming scoop that PHOTOPLAY has been privileged to print in years: Mr. and Mrs. Eddie Fisher are adopting two children.

“Two daughters,” Eddie specified happily to our informant On the “Cleopatra” set, the marvelous news has been a well-kept secret by the couple who love children more than anything in the world—except each other.

“These aren’t just any two children, they’re very special,” a friend of the Fishers said. “You have to know Elizabeth and Eddie deep down to realize all these two little Greek orphans will mean to them.”

Prodded tor an explanation, she summed it up this way: “Elizabeth has her children, and Eddie has his children. He loves hers as dearly as he loves his own. But he and Liz haven’t been able to have a child of their own—and the doctors say they never will. So don’t you see?—these two daughters they will adopt will be the children that Liz and Eddie never had.”

That’s the story: The Fishers will now have their children, to make up for the one that was never born of their love—yet was forever being predicted.

“Their marriage has everything else,” the friend exulted for them. “It was their one disappointment—but no more. Now they will have everything.”

Adoption being, in its way, as chancy as birth, the Fishers may find themselves settling for some combination other than the two daughters of their dreams. They may find themselves the parents of a girl and a boy, two boys, or maybe only one child instead of the duet they hope for with all their hearts.

“But, like any parents, they’ll be happy with what they get,” another close friend assured our correspondent. “You know how it is—you can think pink for nine months, but even if you come up with all-boy quintuplets, you’re grateful to God.”

Whatever is not yet known about the sex and age of the children, this much is for sure:

They will be Greek children. So many of these bereaved tots are desperately in need of parents and a home—in heartbreaking plight.

They will be raised in the Jewish faith. Liz herself turned Jewish when she married Eddie.

They’ll be loved the way children need to be, with an all-embracing, all-accepting love. Whether they’re newborn infants, or toddlers, or older children with nightmare memories of a post-war world, they’ll be warmly welcomed into a family where love is a big thing. And nobody has said one word about Liz and Eddie looking for beautiful children. Only children.

By what magic will two little strangers become “ours” to the Fishers? Webster brusquely defines adoption as the “legal act whereby an adult person takes a minor into the relationship of child; to accept, receive or choose as one’s own.” But to a man and a woman who are emotionally ready to bring up someone else’s child, there’s more to it than signing the papers. They must have it in their hearts to grow as close to the chosen child as if it were seed of their seed and flesh of their flesh.

The few friends who know the Fishers’ plans have no qualms about their qualifications on this score. One said, “Those two have so much love in them that five minutes after somebody puts a baby into their hands and says, ‘Here, take care of this kid,’ they’ll feel as if Liz had just come down from the delivery room.”

People may wonder why Eddie feels the need of another child so soon after adopting Liza Todd. They may point out that Liza became his, legally, last August; that she was only six months old when Mike Todd crashed to his death; that Eddie is the only father she has ever known; she loves him as he loves her, and surely she should satisfy his and Liz’ hunger for “our child.” But Liz and Eddie are two fiercely loyal people—they both loved Mike. They don’t want him forgotten, his picture hangs in their home. They gave his child the legal name of Liza Todd Fisher because, as Eddie said, “We want to keep her real father’s name alive.”

Michael and Christopher Wilding, now eight and six, are also in close kinship with their stepfather. But Michael Wilding will never let him adopt them, any more than Eddie would let his own Carrie Frances and his own Todd Emanuel be Harry Karl’s children legally.

So, though Liz and Eddie each have a big share in the lives of so many loveable little boys and girls, it will take a complete stranger, with no bonds or ties or memories, to give them what they long for—their own child.

Why not an American child?

“But why a European child,” the American public will probably ask? The answer is that it is very difficult to adopt in this country. At least fifty couples clamor for every infant available through the authorized agencies, and for Jewish would-be parents the ratio is even tougher. Hardly any Jewish babies are given up for adoption, and our laws won’t let a couple have a child outside their own faith.

“So the Fishers, like many couples nowadays, feel that Europe is their best hope,” revealed one friend. “They’ve considered the possibility of Italian orphans, or French or Spanish, but more than likely the children will be Greek, They’ve found the authorities very favorably disposed toward them, too. It isn’t a matter of the obvious luxury into which these children will go—they’re only impressed by the parental love and the kindness and intelligence they’ve seen.

“Europeans are much more concerned with the kind of love, not the kind of life, their orphans are exposed to,” she went on. “They have this marvelous Old-World belief that love can make for a beautiful life, while comfort and luxury do not of themselves provide the love that makes life worth living. But these youngsters will have it both ways.”

Evidently the European agencies are as wary as our native ones against letting a child be adopted for selfish motives—like bolstering a shaky marriage. When this was mentioned by our informant, it got a laugh from Liz’ intimate friend.

“That marriage is about as shaky as the Rock of Gibraltar or the Statue of Liberty,” she said. “It has stood up under sickness and slander and threats, and it’s still solid enough to take on a few more members of the family. Liz and Eddie want nothing from these kids except the privilege of loving them.”

There have been many tributes to Liz’ gift for motherhood. She has been called an “adroit and dedicated” mother—warm and affectionate, happy to romp with her children, but a firm disciplinarian who makes them keep regular hours, eat properly and mind their manners. Michael Wilding, long after their divorce, said of her way with children, “She’s marvelous with them, absolutely wonderful. Of course she’s more mature now, but when she was younger she played with them as though she were a child herself. She was enchanting.”

Later, she gave birth to Liza Todd with incredible difficulty and pain that could be borne only by a woman desperately eager to have a child by the husband she worshipped. This was her third delivery by Caesarean section, and the doctors said it must be her last.

Friends have pointed out that when Mike died, it was only the need to be a responsible mother that kept her going at all. And Eddie Fisher is firmly convinced that some day she will give up her career for them and him. “I think that is what Elizabeth wants most in the world—to be with her husband and children and to have roots,” he said.

Meanwhile, the children he and Liz adopt will be able to call the world home. When the Fishers travel, for work or vacation, they go en masse, they don’t believe in separations. “We’re like a caravan of gypsies,” says Liz, “but organized gypsies.” Children, pets, nursemaids and mountains of luggage move from New York to California to the Caribbean to England to Rome—and now Switzerland will be added to the itinerary for holiday visits to the new family chalet being purchased there. “My doll Elizabeth wants roots,” as Eddie said of their long search in many parts of the globe for a permanent homeplace.

As to his own hunger for another child, or children, he has never tried to keep it a secret. Every time he’s had to deny another rumor that Elizabeth was pregnant, he also admitted wistfully, “I wish it were true.” Every time Liz was laid low by another illness there was an early diagnosis—rumored, of course. “Liz Taylor is pregnant, not ill.” And every time she pulled through, and then gained weight while convalescing, the rumors were revived. “This time Liz Taylor really is pregnant.”

“No,” Eddie said to columnist Hy Gardner, at one point, “that’s another phony rumor. I wish she could have another baby.”

Now at last the rumors can be laid to rest.

One last point. once, before Debbie Reynolds’ marriage to Harry Karl, Eddie was deeply troubled because he didn’t know yet what kind of stepfather Harry would make for Carrie and Todd. “In my heart I have an incredibly deep love for them and I don’t want anything ever to hurt them,” he said frankly. “They are a part of me and I’m a part of them. That’s the way it is when you’re a parent—your children are your flesh and blood.” Now the Fishers are going to be parents to youngsters not of their flesh and blood.

There are people to whom it is inconceivable that a child can be your own and not originate of your seed and body. To others—the Fishers included—true parenthood is not exclusively an affair of the body—it can also be a State of the heart. Good luck to Liz and Eddie.